An innovation ecosystem fueled by Georgia Tech is attracting AT&T and other companies to Technology Square. 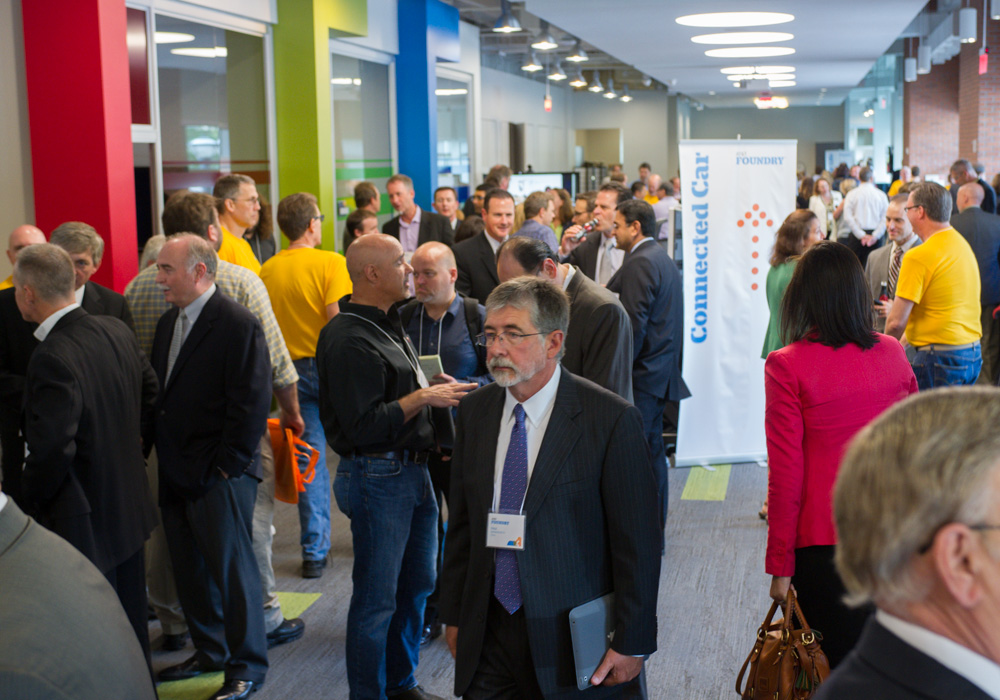 AT&T Inc. officially opened its Foundry product development center at Technology Square on the Georgia Tech campus Aug. 27. The move gives AT&T a prominent place in a company-support system acknowledged as a leader in fostering both technology and business innovation.

In its new location in the Centergy building on the edge of the Georgia Tech campus, the AT&T Foundry connects to the Institute’s students, research program – and dozens of early-stage technology companies being incubated through Georgia Tech’s Advanced Technology Development Center, VentureLab and Flashpoint initiatives. Georgia Tech's incubation/acceleration services are rated among the top such efforts worldwide by observers such as Forbes Magazine and Stockholm-based UBI Index.

Moreover, AT&T's new location places it close to Georgia Tech's many faculty-student research teams, as well as a variety of business and startup-support groups located in midtown Atlanta. And the Foundry is just a few floors away from other major multinational companies – its Centergy building neighbors include the Panasonic Innovation Center and the ThyssenKrupp (TK) Elevator Americas innovation facility, while NCR Corp.'s Hosted Solutions Group is headquartered a block away at the Biltmore on West Peachtree Street.

"When we locate a Foundry facility, our number one criterion is to be part of an ecosystem that fosters innovation – which usually occurs at the intersection of premier education, high technology and an entrepreneurial mindset – and those are all things that we found at Technology Square," said Ralph de la Vega, president and CEO, AT&T Mobility. "When I saw the startup company incubators there, and the entrepreneurs and the high-quality technical people from Georgia Tech who are driving them, I knew this is where we needed to be. In fact, we're already talking with a startup whose technology could significantly benefit our product offerings."

In addition to Georgia Tech, the Foundry is collaborating extensively with networking leader Cisco Systems Inc., which employs nearly 2,000 people in the metro area.  Working with Cisco, AT&T will concentrate on developing products for Digital Life, AT&T’s home security and automation service.

The team will also create new applications and services related to such focus areas as the connected car, mobility, emerging devices, and AT&T U-verse. Cisco will collaborate with AT&T on projects, and will also help identify key third-party developers, startups, investors, inventors and other entrepreneurs to bring into the facility.

The $3 million total Foundry investment stems from the joint efforts of AT&T, Cisco and Georgia Tech, along with state and local involvement. The Foundry in Atlanta is only the fourth such venture for AT&T – the company has similar centers in Palo Alto, Calif.; Plano, Texas, and Tel Aviv, Israel.

The many startups found on Technology Square are largely a result of the ATDC startup accelerator, which provides coaching, connections and even office space to many young Georgia companies. ATDC's work is aided by Flashpoint, which helps early-stage startups minimize risk and accelerate growth, and by VentureLab, which focuses on turning discoveries by Georgia Tech faculty, research staff and students into new companies.

The collaborative environment of Tech Square extends to many Georgia Tech faculty-student research teams, which cooperate on hundreds of research projects with companies on campus and around the globe. These research teams often collaborate among themselves as well, reflecting Georgia Tech's strong emphasis on interdisciplinary cooperation among colleges, schools, departments and research institutes throughout campus.

"I think it's widely recognized that the Technology Square innovation zone offers one of the world's top business-support infrastructures," said Stephen Fleming, vice president and executive director of Georgia Tech’s Enterprise Innovation Institute, which oversees ATDC and VentureLab. "A critical mass has been forming around Georgia Tech based on a multi-faceted innovation environment, and companies come here because they're attracted by that range of capabilities, not just by a single center or research team or partner."

"When you look at everything we're doing in the intersection of people and technology, the startup community, and the exciting faculty and student innovation – a Technology Square location was a great choice for AT&T, as it has been for other corporate partners like NCR, Panasonic and ThyssenKrupp," King said. "The Institute for People and Technology, the Georgia Tech Research Institute and ATDC’s Industry Connect program that helps larger companies connect with relevant startup companies – all played a part in the selection of this area for AT&T’s Foundry.”

”Georgia Tech was founded with a mandate to foster economic development and to conduct research with relevance," said Cross. "Our innovation ecosystem helps give Georgia businesses – and multinational partners such as AT&T and others – straightforward access to our world-class basic and applied research capabilities and our 'One Georgia Tech' collaborative environment."

But once the new innovation location was up and running, he said, it became clear that the Georgia Tech and Technology Square environment could directly benefit product development at the Automotive Systems division, which focuses on infotainment systems, sensors, switches, power systems and other products for vehicles.

"We're increasing our innovation focus, connecting with the startup community in midtown and participating in all the good things that are going on there – ATDC and Flashpoint and the Midtown Alliance and the Hypepotamus startup support group," he said. "There's a lot of great things happening at once, which are making midtown into a really significant location."

Panasonic's Centergy offices currently have space for about 40, Avery said. The center employs a number of Panasonic staffers, along with Georgia Tech students in intern and co-op roles.

Panasonic recently sponsored the Convergence Innovation Competition (CIC) for students, and plans to sponsor other student efforts such as senior capstone projects. In addition, Avery said, innovation center executives plan to approach companies incubated at Georgia Tech and in the metro area about potential business opportunities with Automotive and other Panasonic divisions.

NCR opened an R&D center in the Centergy Building nearly three years ago to hire Georgia Tech students and work on mobile applications and cloud computing technologies. That effort was successful – so much so that the center soon moved to a larger space in the nearby Biltmore, which became home to the NCR Hosted Solutions Group.

"That first little office in Centergy really exceeded our expectations – we soon had formed a phenomenal team made up mostly of new Georgia Tech grads and interns," said Mike Finley, chief technology officer for NCR’s Hosted Solutions Group. "It hit us right away what a focused and clever group of people we had. They were very entrepreneurial and very engaged – not only in the technology, but also in the kind of business that was being built."

Today, the Hosted Solutions Group's R&D center has more than 50 employees – mostly full-time – at its Biltmore location, and expects to add up to 15 new people each year, he said.

Currently, NCR is collaborating with a Georgia Tech faculty-student research team on a project involving the unstructured analysis of "big data," massive information sets that require special computation tools. In addition, the group is engaged with several small Georgia companies through the Flashpoint accelerator, and expects to be involved in Capstone Design courses in which Georgia Tech students develop real-world prototypes.

"We're working on a whole array of products – cloud and mobile applications, social applications and both consumer and business applications – and access to the skilled and highly motivated people we encounter at Georgia Tech is a vital part of our development strategy," Finley said.

ThyssenKrupp Elevator Americas is heavily invested in the U.S., with a manufacturing plant and research center in Tennessee. The company conducted a lengthy assessment of U.S. engineering colleges before deciding to site its innovation facility at Georgia Tech, said Thomas Felis, vice president for innovation management.

"We evaluated the scores of major U.S. engineering programs on a national basis, and considered what you might call the personality of each university," he said. "Georgia Tech was a more hands-on school than MIT and certain others – which is what we were looking for. And when we also considered the infrastructure, the lab space available, and the Georgia Tech Manufacturing Institute, we decided to come here."

Felis said that the ThyssenKrupp Elevator Innovation Center, which opened in January 2013, is already working with two Georgia Tech startup companies. The aim of the collaborations is to develop human interface improvements that could enhance elevator technology.

"We also think a lot about lightweight material, vibration and noise cancellation, and about technologies like additive manufacturing and 3-D printing – and Georgia Tech is very strong in these areas," he said. "We have several research projects lined up with Tech, and we expect to start work on them very soon." 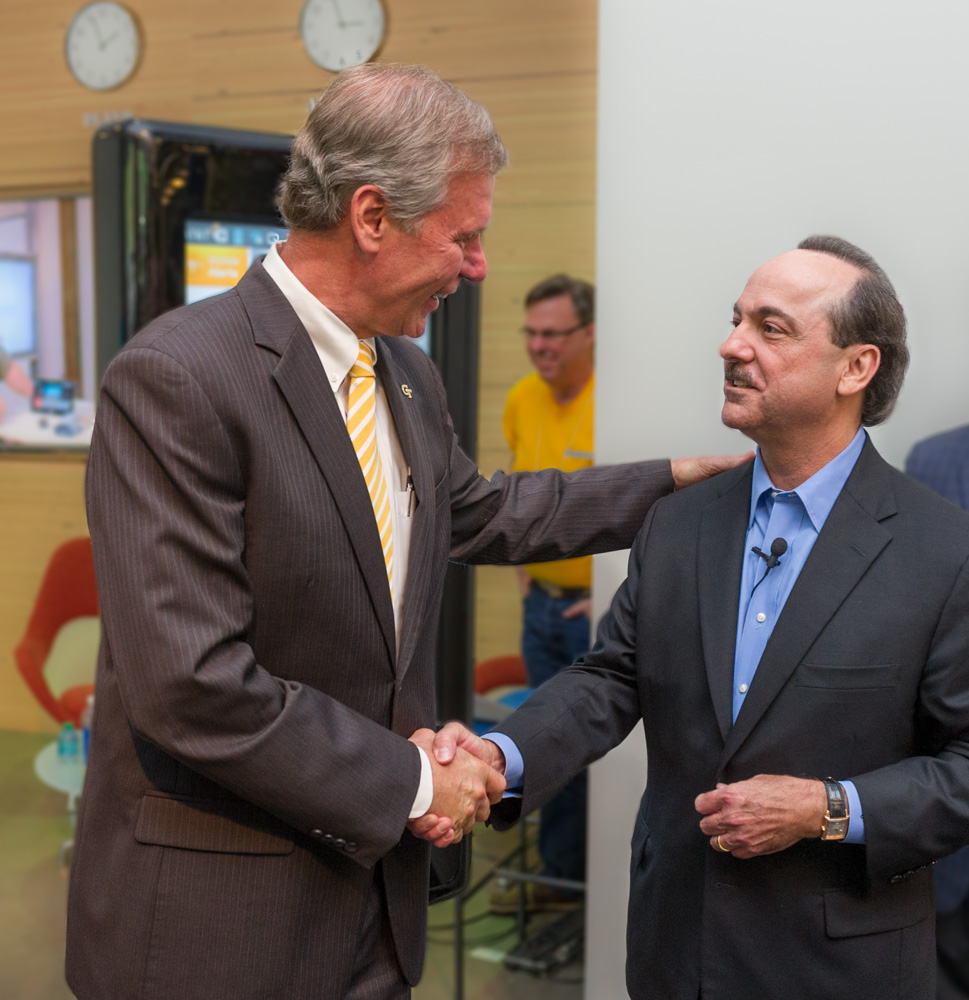 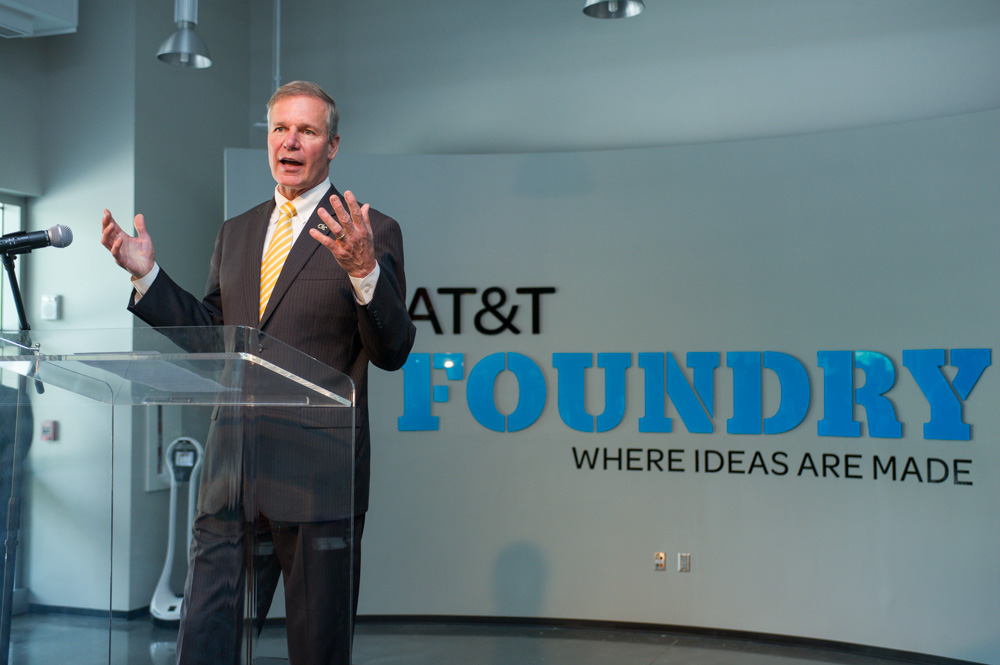 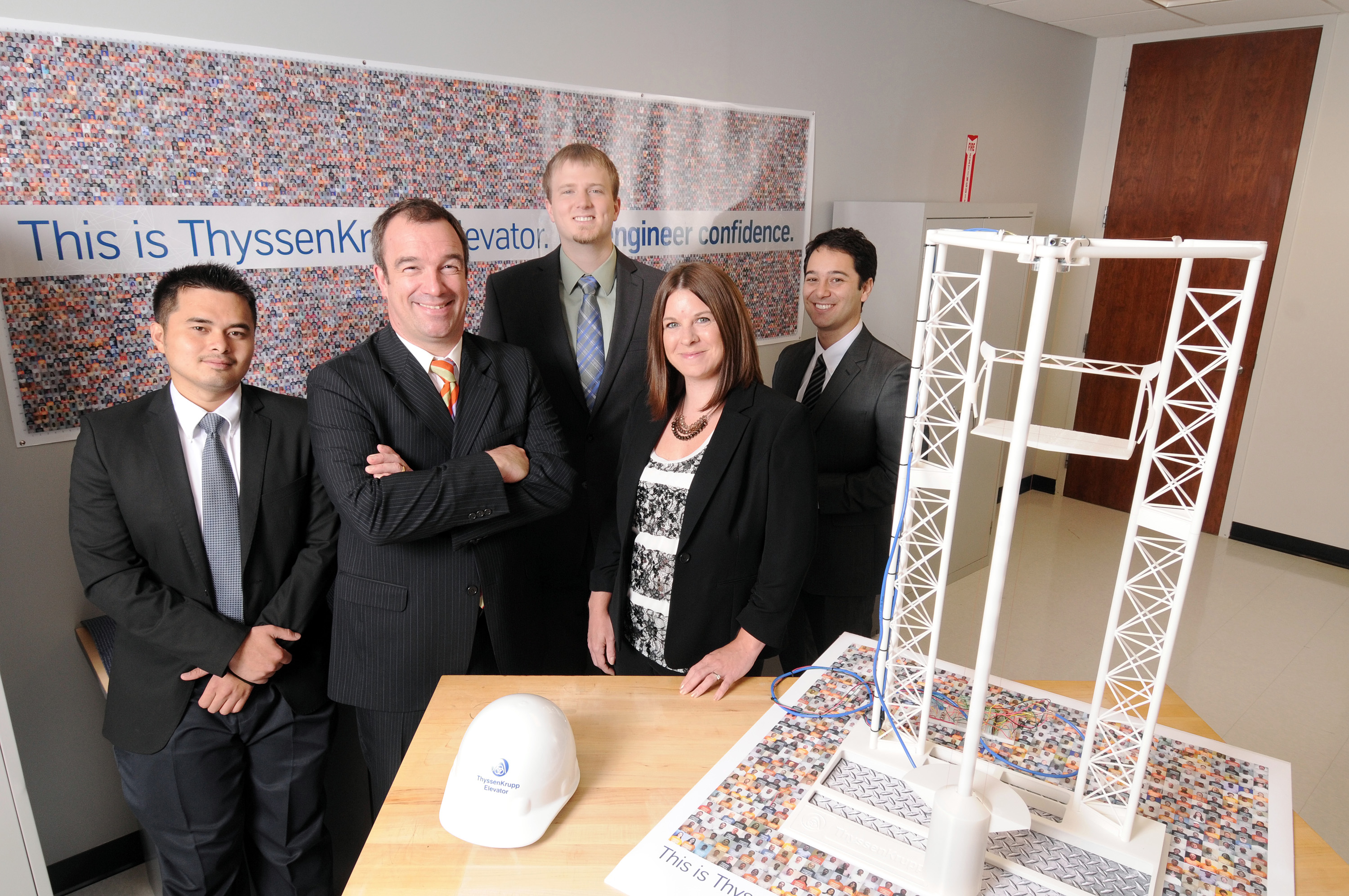 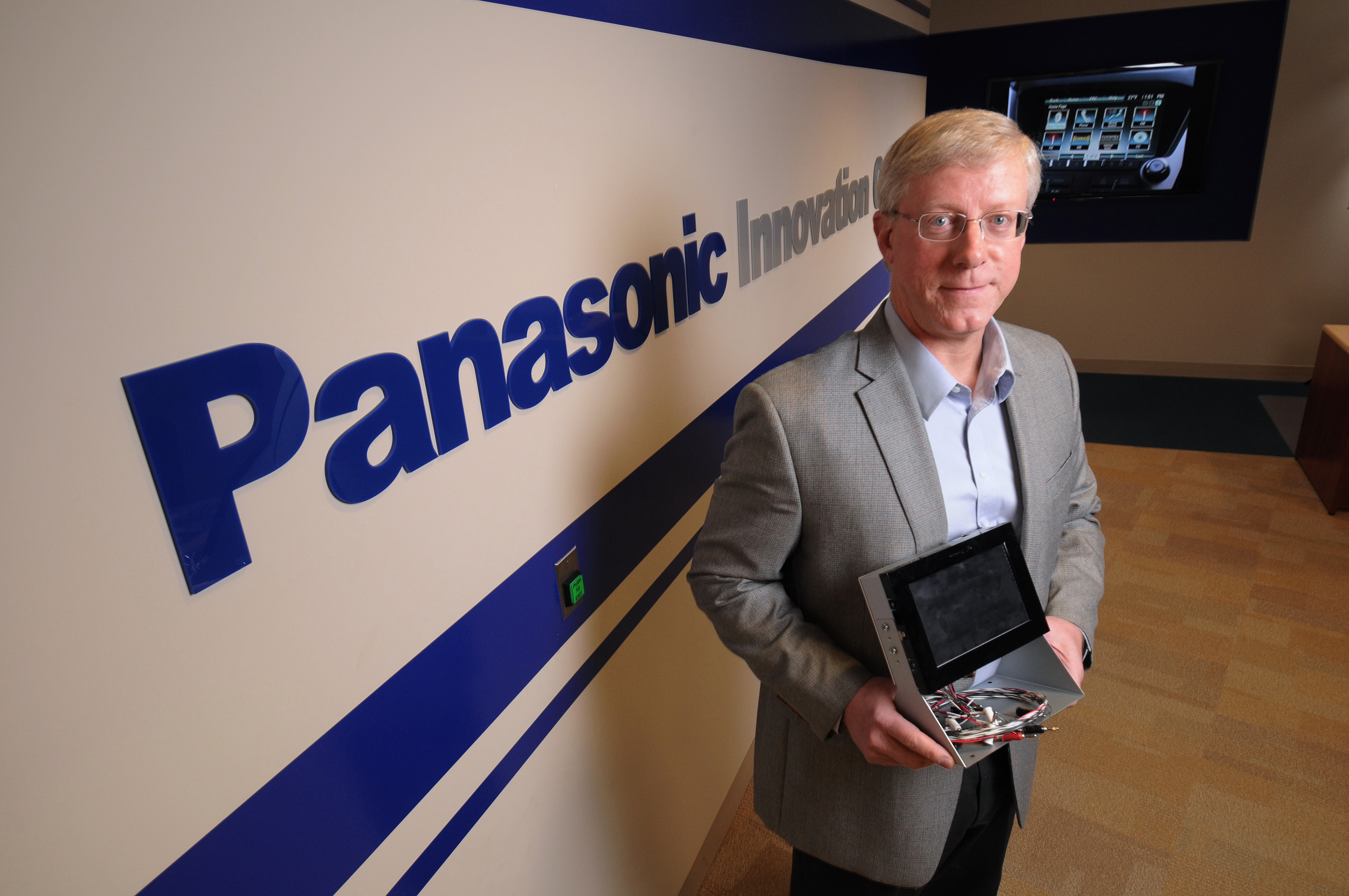