Researchers have discovered that under typical culture conditions, mammalian cells prefer disc-shaped nanoparticles over those shaped like rods. 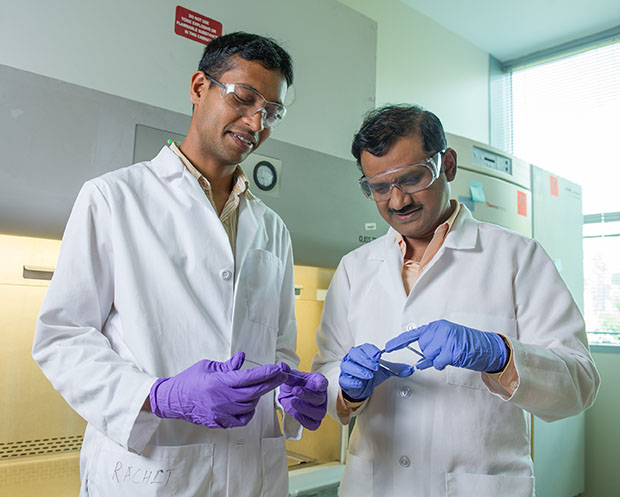 For years scientists have been working to fundamentally understand how nanoparticles move throughout the human body. One big unanswered question is how the shape of nanoparticles affects their entry into cells. Now researchers have discovered that under typical culture conditions, mammalian cells prefer disc-shaped nanoparticles over those shaped like rods.

Understanding how the shape of nanoparticles affects their transport into cells could be a major boost for the field of nanomedicine by helping scientists to design better therapies for various diseases, such as improving the efficacy and reducing side effects of cancer drugs.

In addition to nanoparticle geometry, the researchers also discovered that different types of cells have different mechanisms to pull in nanoparticles of different sizes, which was previously unknown. The research team also used theoretical models to identify the physical parameters that cells use when taking in nanoparticles.

“This research identified some very novel yet fundamental aspects in which cells interact with the shape of nanoparticles,” said Krishnendu Roy, who recently joined the Wallace H. Coulter

Department of Biomedical Engineering at Georgia Tech and Emory University. Roy conducted this research at The University of Texas at Austin in collaboration with Profs. S. V. Sreenivasan and Li Shi, but is continuing the work at Georgia Tech.

The study was scheduled to be published the week of Oct. 7 in the early online edition of the journal Proceedings of the National Academy of Sciences. The work was sponsored by the National Science Foundation and the National Institutes of Health.

Roy’s team used a unique approach to making the differently shaped nanoparticles. The researchers adapted an imprinting technology used in the semiconductor industry and rigged it to work with biological molecules, Roy said. This imprinting technique, which they developed at UT-Austin, works like a cookie cutter but on the nanoscale. Drugs are mixed with a polymer solution and dispensed on a silicon wafer. Then a shape is imprinted onto the polymer-drug mixture using a quartz template. The material is then solidified using UV light. Whatever the cookie cutter’s template – triangle, rod, disc – a nanoparticle with that shape is produced.

Another key feature of the nanoparticles is that they are negatively charged and are hydrophilic, attributes that make them relevant for clinical use in drug delivery.

“We have exquisite control over the shapes and sizes,” said Roy, who is a Wallace H. Coulter Distinguished Faculty Fellow.

His team then used particles of various shapes and sizes to see how different kinds of cultured mammalian cells would respond to them. The materials and surface charges of the particles were all the same, only the shapes differed.

Roy’s team was not expecting cells to prefer discs over rods. They found that in cell culture, unlike spherical nanoparticles, larger sized discs and rods are taken up more efficiently, a finding that was also unexpected. When they ran theoretical calculations they found that the energy required by a cell membrane to deform and wrap around a nanoparticle is lower for discs than rods and that gravitational forces and surface properties play a significant role in nanoparticle uptake in cells.

“The reason this has been unexplored is that we did not have the tools to make these precisely-shaped nanoparticles,” Roy said. “Only in the past seven or eight years have there been a few groups that have come up with these tools to make polymer particles of various sizes and shapes, especially in the nanoscale.”

Cells take in nanoparticles through a process called endocytosis, but depending on the shape and cell-type, specific uptake pathways are triggered, the team discovered. Some cells rely on proteins in their membranes called caveolin; others use a different membrane protein, known as clathrin.

Understanding how cells respond to the shapes of nanoparticles is important not just for drug delivery, but also for understanding the toxicity of nanomaterials used in consumer products. Roy’s new work provides another piece to solving this puzzle.

In future work at Georgia Tech, Roy’s lab would like to investigate how the shapes of nanomaterials affect their transport and function in animal models. This will give researchers a better idea how the particles move into tumors, pass across mucosal surfaces and distribute into organs, and ultimately aid in clinical therapies.

“99.9 percent of our work is still to be done, which we want to continue to do here at Tech in collaboration with researchers at UT,” Roy said.

Other researchers on the study include Rachit Agarwal, the lead author who is now a post-doctoral fellow at Georgia Tech, as well as Vikramjit Singh, Patrick Jurney, Li Shi and S.V. Sreenivasan, all of whom were at The University of Texas at Austin

This research is supported by the National Science Foundation under award CMMI0900715, and by the National Institutes of Health under award EB008835. Any conclusions or opinions are those of the authors and do not necessarily represent the official views of the sponsoring agencies.

Roy’s team used an imprinting technology that works like a cookie cutter but on the nanoscale. Drugs are mixed with a polymer solution and dispensed on a silicon wafer. Then a shape is imprinted onto the polymer-drug mixture using a quartz template. The material is then solidified using UV light. Whatever the cookie cutter’s template – triangle, rod, disc – a nanoparticle with that shape is produced. (Credit: Rob Felt)