A pair of carbon nanotube arrays will be flying in space by the end of the year to test technology that could provide more efficient micro-propulsion for future spacecraft. 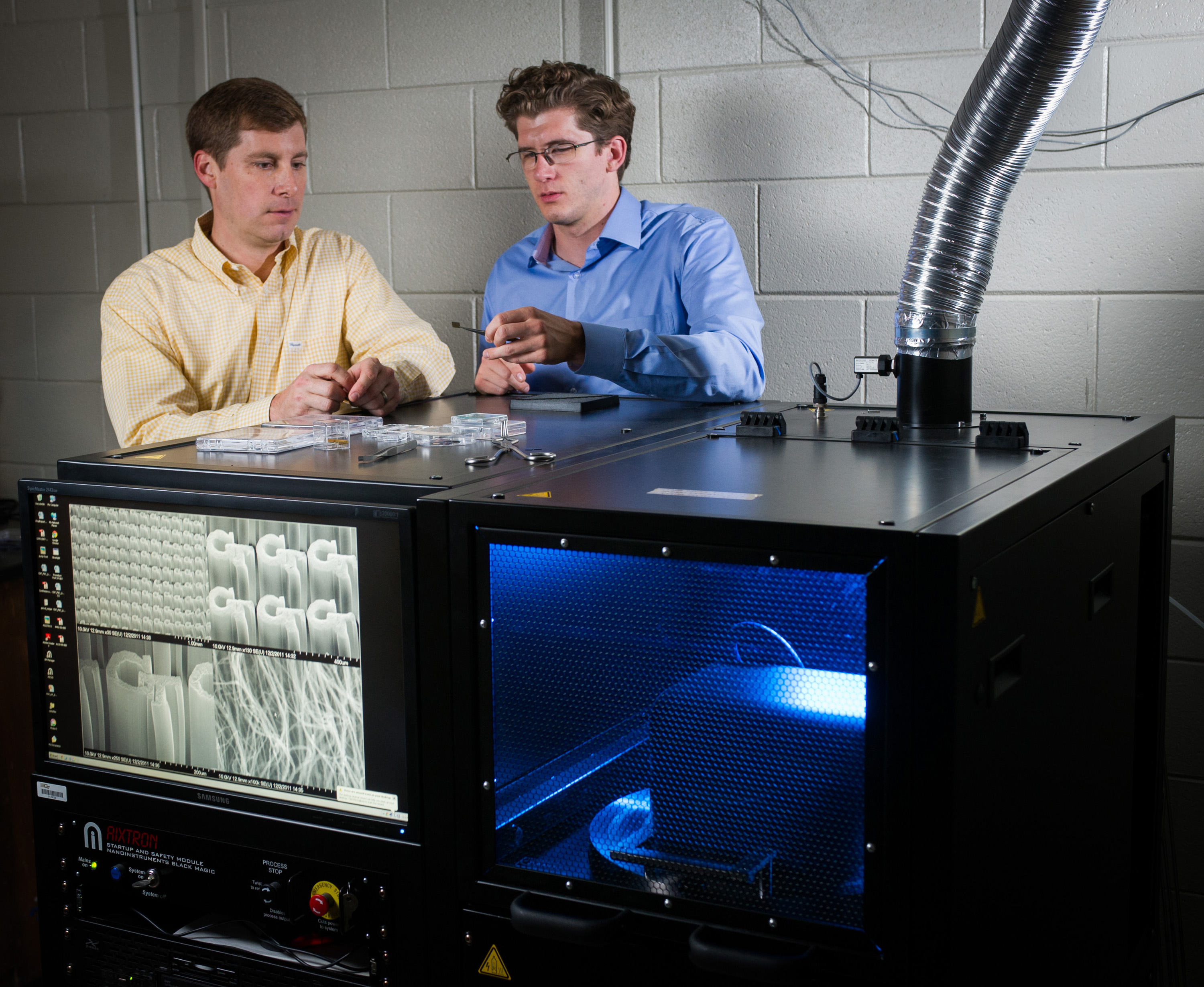 A pair of carbon nanotube arrays will be flying in space by the end of the year to test technology that could provide more efficient micro-propulsion for future generations of spacecraft. Part of a Cube Satellite (CubeSat) developed by the Air Force Institute of Technology (AFIT), the arrays will support what is expected to be the first-ever space-based testing of carbon nanotubes as electron emitters.

Researchers at the Georgia Tech Research Institute (GTRI) produced the arrays using unique technology that grows bundles of vertically-aligned nanotubes embedded in silicon chips. In future versions of electrically-powered ion thrusters, electrons emitted from the carbon nanotube tips may be used to ionize a gaseous propellant such as xenon. The ionized gas would then be ejected through a nozzle to provide thrust for moving a satellite in space.

“The mission will characterize how well these field emission electron sources operate in the space environment relative to how well they work on the ground in vacuum chamber,” said Jud Ready, a GTRI principal research engineer. “Launch vibrations and exposure to a space environment that includes atomic oxygen and micrometeorites could have some unusual effects on the arrays. This mission will help us evaluate whether these carbon nanotube electron emitters could be used in ion thrusters.”

Existing ion thrusters rely on thermionic cathodes, which use high temperatures generated by electrical current to produce electrons. These devices require significant amounts of electricity to generate the heat, and must consume a portion of the propellant for their operation.
If the carbon nanotube arrays can be used as electron emitters, they would operate at lower temperatures with less power – and without using the limited on-board propellant. That could allow longer mission times for satellites, or reduce the weight of the micro-propulsion systems.

The carbon nanotube arrays are part of ALICE, a CubeSat micro-satellite developed and built by the Air Force Institute of Technology at Wright-Patterson Air Force Base in Ohio. On a mission scheduled for Dec. 5 from Vandenberg Air Force Base in California, ALICE will ride into space on an Atlas V rocket being used to launch a separate and much larger payload. Just 10 by 10 by 30 centimeters in size, ALICE will be part of an array of eight CubeSats – so named because they fit into small modular launchers attached to the main satellite.

The work could lead to improved micro-propulsion systems useful to small spacecraft, said Jonathan Black, director of the Center for Space Research and Assurance at AFIT.

“Technology like the devices being tested on ALICE is essential to our future ability to maneuver micro satellites or change their orbits,” he explained. “Being able to incorporate propulsion into microsatellites like CubeSats increases mission longevity and the types of missions they can perform. Successful demonstrations of advanced technologies like those being flown on ALICE will ultimately lead to smaller, lighter and more energy-efficient propulsion, resulting in decreased launch costs while increasing the performance of all satellites using electric propulsion.”

Utilizing a multi-departmental team, AFIT engineers in the Electrical Engineering Department developed a payload to directly expose the carbon nanotube arrays to the space environment while protecting an identical control array within the satellite. The arrays, which are approximately one centimeter square, will be switched on and off and their behavior studied. The payload experiment utilizes a sensor device known as the Integrated Miniaturized Electromagnetic Analyzer (iMESA), designed by engineers at the U.S. Air Force Academy (USAFA). The data collected from the satellite will be downloaded and processed at AFIT by students and technicians in the Department of Aeronautics and Astronautics.

The carbon nanotube arrays are excellent conductors and their geometry makes them ideal electron emitters.

“We use carbon nanotubes because they have a high aspect ratio and provide a nanoscale point that emits the electrons,” said Graham Sanborn, who worked on the project as part of his Ph.D. thesis in Georgia Tech’s School of Materials Science and Engineering. “The electric field focuses on the tip so we are able to get electron emission at lower voltages than might be required for other materials.”

GTRI uses a series of deposition and etching steps to fabricate the arrays in clean rooms at Georgia Tech. Each one-centimeter square array contains as many as 50,000 nanotube bundles, and each bundle is grown from a five-micron pit etched into the silicon.

“The design has specific geometry to prevent electrical shorting between electrodes that are very close together,” explained Sanborn.

Spacecraft are launched using chemical rockets that provide large amounts of thrust. Once in orbit, however, the vehicles can use electrically-powered thrusters to change orbits or make other maneuvers.

“Ion thrusters provide very low amounts of thrust,” Sanborn said. “They are just pushing out gas molecules, but they operate very efficiently. Ion thrusters can operate for thousands of hours at a time. Cumulatively, you can achieve a significant velocity change.”

The ALICE acronym is composed of several other acronyms. The “A” represents AFIT, while the “L” is for LEO – the low Earth orbit where the satellite will operate. The “I” represents the iMESA system; the “C” is for the carbon nanotubes, while the “E” represents “Experiment.”

The satellite, the first for AFIT, was designed, tested and integrated by a multi-departmental team of professors, students and technicians. The partnership with GTRI and USAFA provided students in each institution an opportunity to participate in ground-breaking research with the potential to impact numerous future satellites employing electric propulsion. 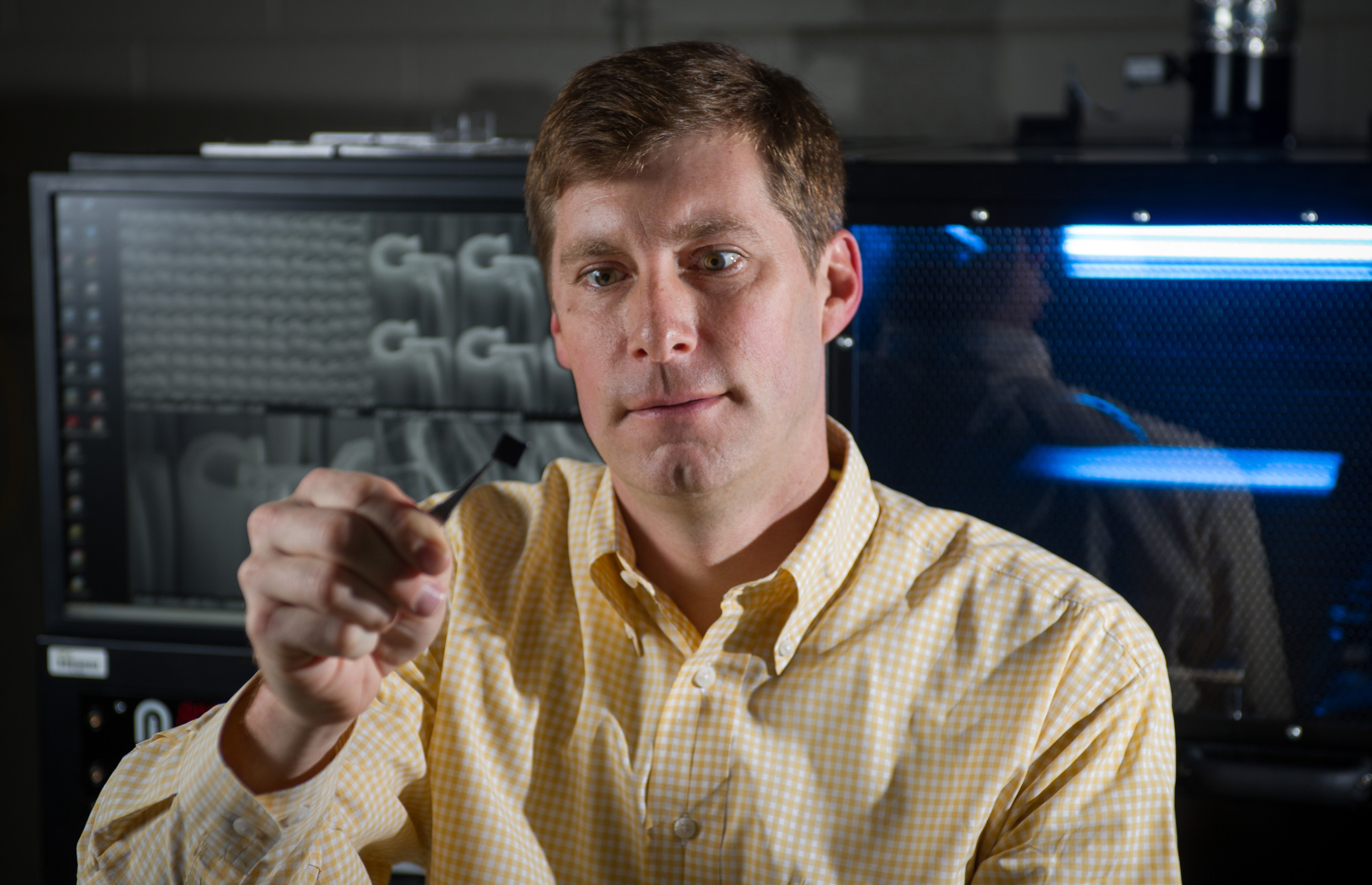 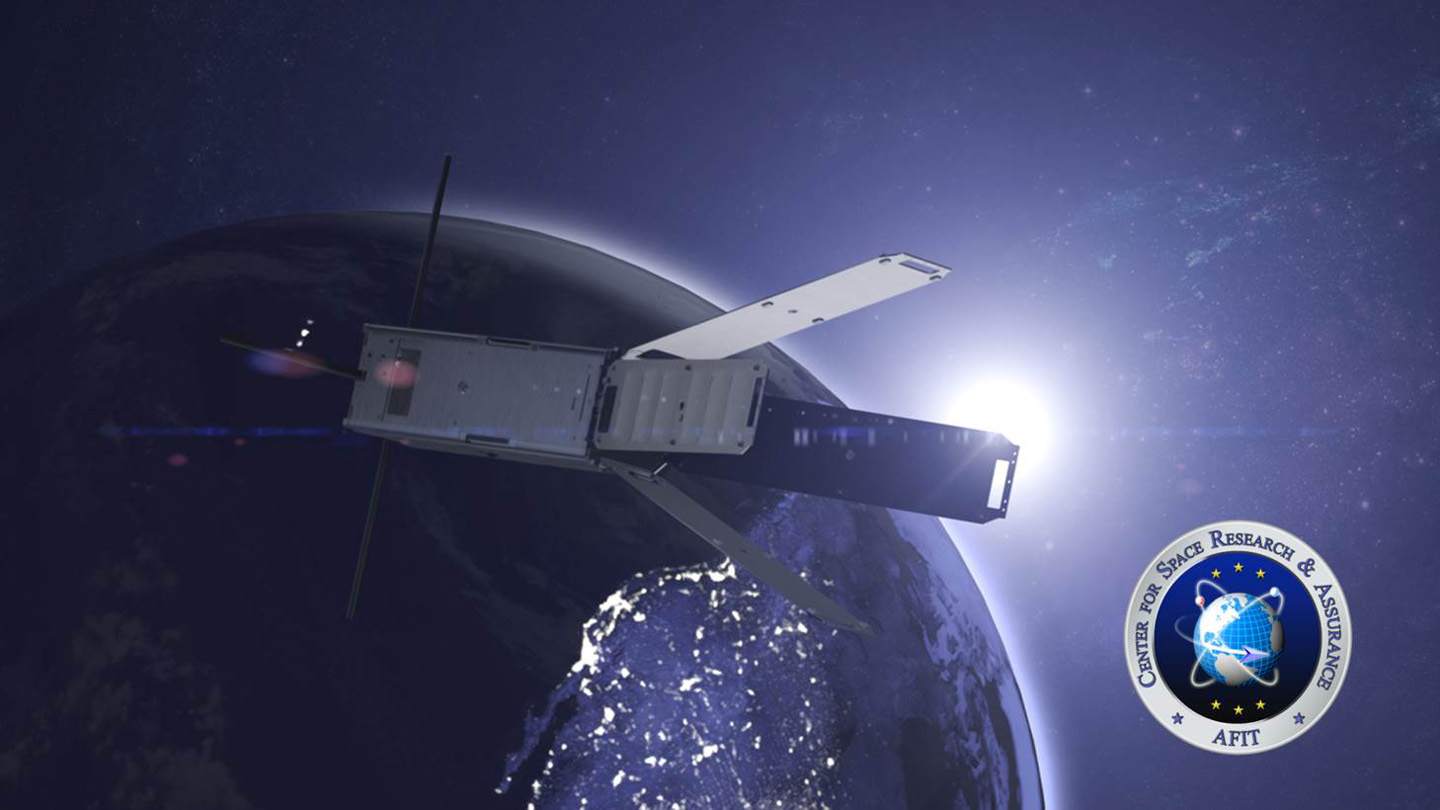 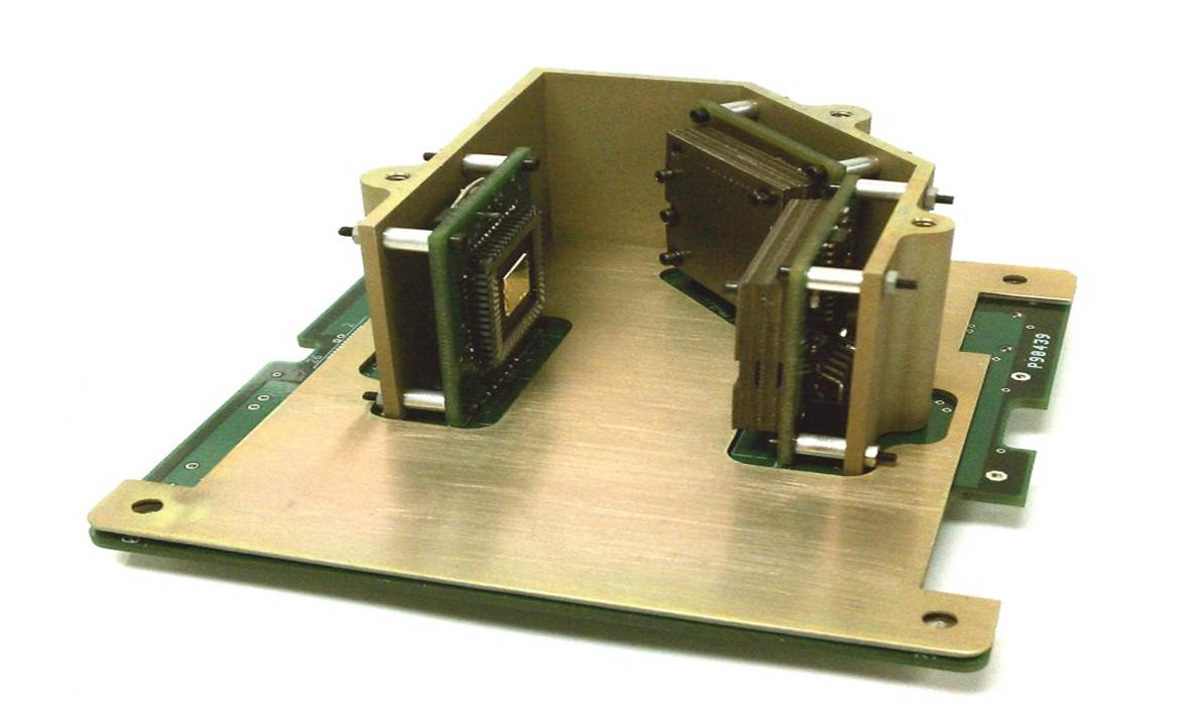 This photograph shows the test equipment on the ALICE CubeSat. The payload will test the operation of carbon nanotubes as electron emitters in space, part of a program that could lead to better electrically-powered ion propulsion systems. (Image courtesy of Air Force Institute of Technology) 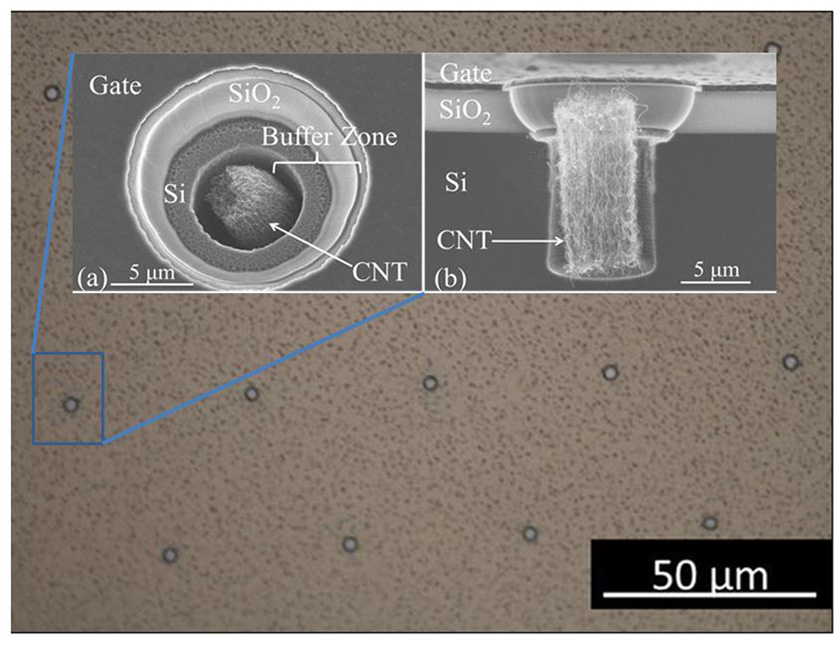 This microscope image shows bundles of carbon nanotubes grown in pits on this silicon microchip. The inset image shows a cross-section of how the bundles are grown in the pits. (Image courtesy of Graham Sanborn)