Graphene antennas may open the possibility for networks of nanometer-scale machines. 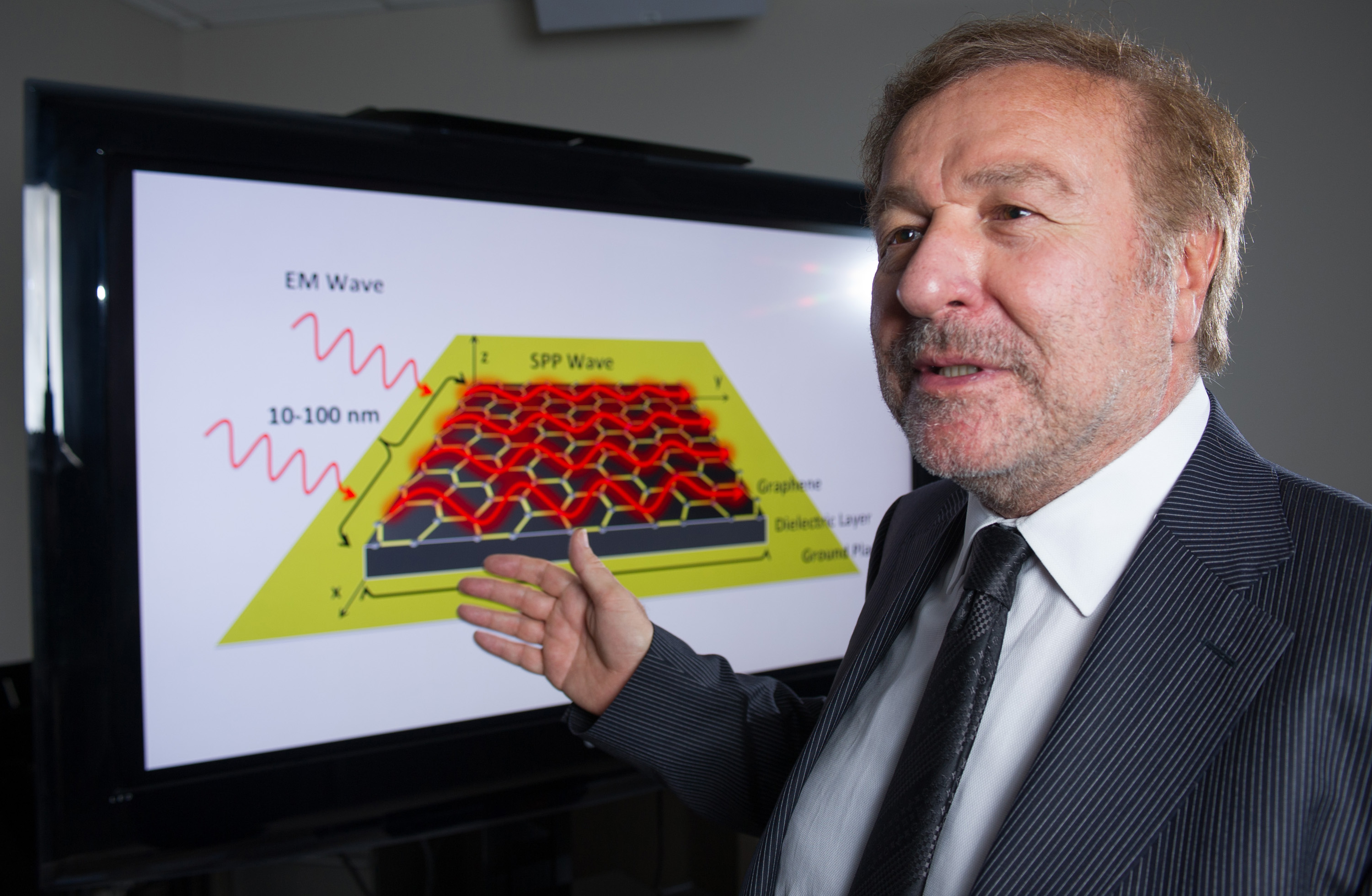 With antennas made from conventional materials like copper, communication between low-power nanomachines would be virtually impossible. But by taking advantage of the unique electronic properties of the material known as graphene, researchers now believe they’re on track to connect devices powered by small amounts of scavenged energy.

Based on a honeycomb network of carbon atoms, graphene could generate a type of electronic surface wave that would allow antennas just one micron long and 10 to 100 nanometers wide to do the work of much larger antennas. While operating graphene nano-antennas have yet to be demonstrated, the researchers say their modeling and simulations show that nano-networks using the new approach are feasible with the alternative material.

“We are exploiting the peculiar propagation of electrons in graphene to make a very small antenna that can radiate at much lower frequencies than classical metallic antennas of the same size,” said Ian Akyildiz, a Ken Byers Chair professor in Telecommunications in the School of Electrical and Computer Engineering at the Georgia Institute of Technology. “We believe that this is just the beginning of a new networking and communications paradigm based on the use of graphene.”

Sponsored by the National Science Foundation, the research is scheduled to be reported in the journal IEEE Journal of Selected Areas in Communications (IEEE JSAC). In addition to the nanoscale antennas, the researchers are also working on graphene-based nanoscale transceivers and the transmission protocols that would be necessary for communication between nanomachines.

The communications challenge is that at the micron scale, metallic antennas would have to operate at frequencies of hundreds of terahertz. While those frequencies might offer advantages in communication speed, their range would be limited by propagation losses to just a few micrometers. And they’d require lots of power – more power than nanomachines are likely to have.

Akyildiz has studied nanonetworks since the late 1990s, and had concluded that traditional electromagnetic communication between these machines might not be possible. But then he and his Ph.D. student, Josep Jornet – who graduated in August 2013 and is now an assistant professor at the State University of New York at Buffalo – began reading about the amazing properties of graphene. They were especially interested in how electrons behave in single-layer sheets of the material.

Known technically as a surface plasmon polariton (SPP) wave, the effect will allow the nano-antennas to operate at the low end of the terahertz frequency range, between 0.1 and 10 terahertz – instead of at 150 terahertz required by traditional copper antennas at nanoscale sizes. For transmitting, the SPP waves can be created by injecting electrons into the dielectric layer beneath the graphene sheet.

By allowing electromagnetic propagation at lower terahertz frequencies, the SPP waves require less power – putting them within range of what might be feasible for nanomachines operated by energy harvesting technology pioneered by Zhong Lin Wang, a professor in Georgia Tech’s School of Materials Science and Engineering.

The nanomachines in the network that Akyildiz and Jornet envision would include several integrated components. In addition to the energy-harvesting nanogenerators, there would be nanoscale sensing, processing and memory, technologies that are under development by other groups. The nanoscale antenna and transceiver work being done at Georgia Tech would allow the devices to communicate the information they sense and process to the outside world.

“Each one of these components would have a nanoscale measurement, but in total we would have a machine measuring a few micrometers,” said Jornet. “There would be lots of tradeoffs in energy use and size.”

Beyond giving nanomachines the ability to communicate, hundreds or thousands of graphene antenna-transceiver sets might be combined to help full-size cellular phones and Internet-connected laptops communicate faster.

The unique properties of graphene, Akyildiz says, are critical to this antenna – and other future electronic devices.

“Graphene is a very powerful nanomaterial that will dominate our lives in the next half-century,” he said. “The European community will be supporting a very large consortium involving many universities and companies with an investment of one billion euros to conduct research into this material.”

The researchers have so far evaluated numerous nano-antenna designs using modeling and simulation techniques in their laboratory. The next step will be to actually fabricate a graphene nano-antenna and operate it using a transceiver also based on graphene.

“Our project shows that the concept of graphene-based nano-antennas is feasible, especially when taking into account very accurate models of electron transport in graphene,” said Akyildiz. “Many challenges remain open, but this is a first step toward creating advanced nanomachines with many applications in the biomedical, environmental, industrial and military fields.”

The research described here was supported by the National Science Foundation under award number CCF-1349828. Any opinions or conclusions are those of the authors and do not necessarily reflect the official views of the NSF. 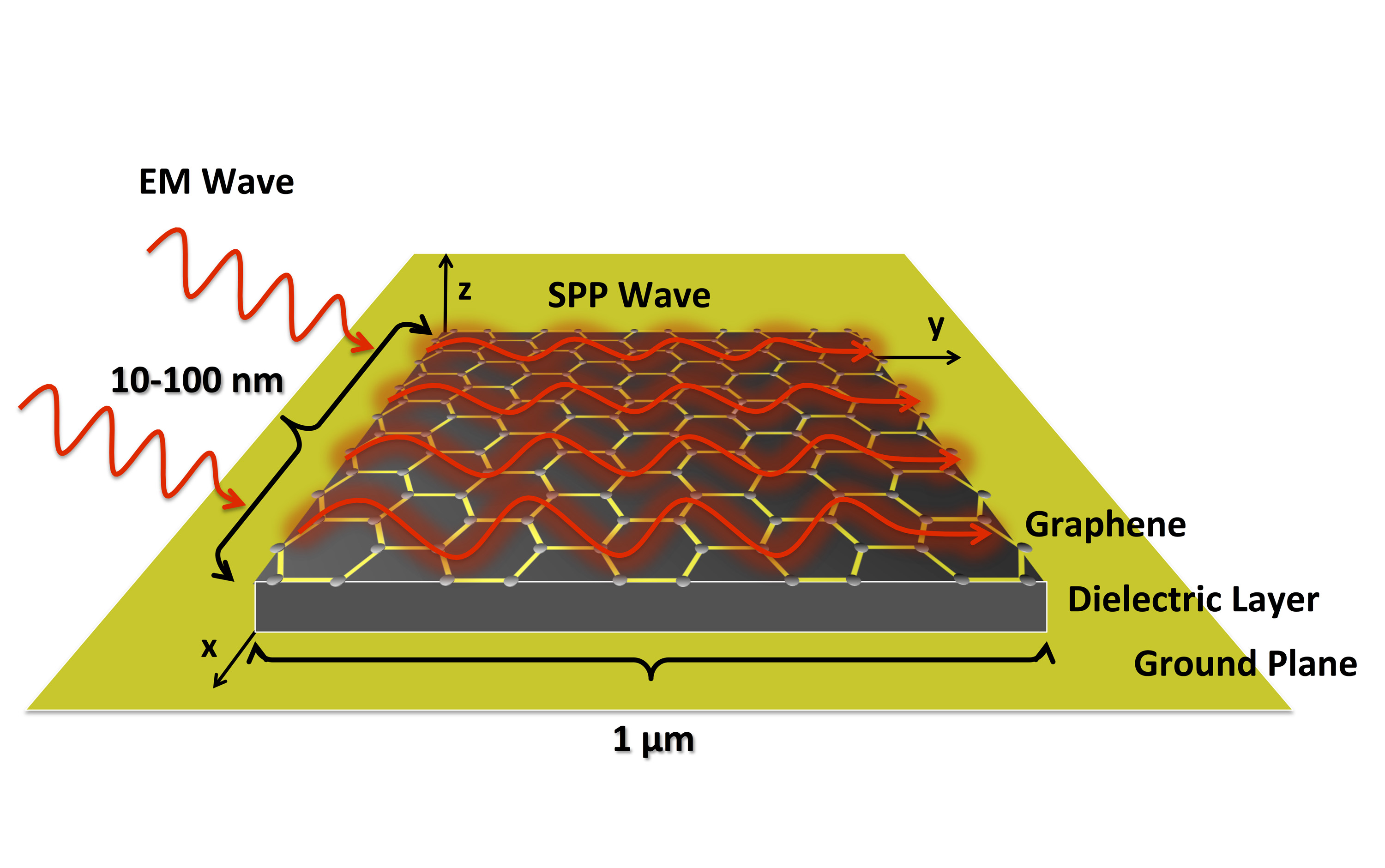 Schematic shows how surface plasmon polariton (SPP) waves would be formed on the surface of tiny antennas fabricated from graphene. The antennas would be about one micron long and 10 to 100 nanometers wide. (Courtesy Ian Akyildiz and Josep Jornet)