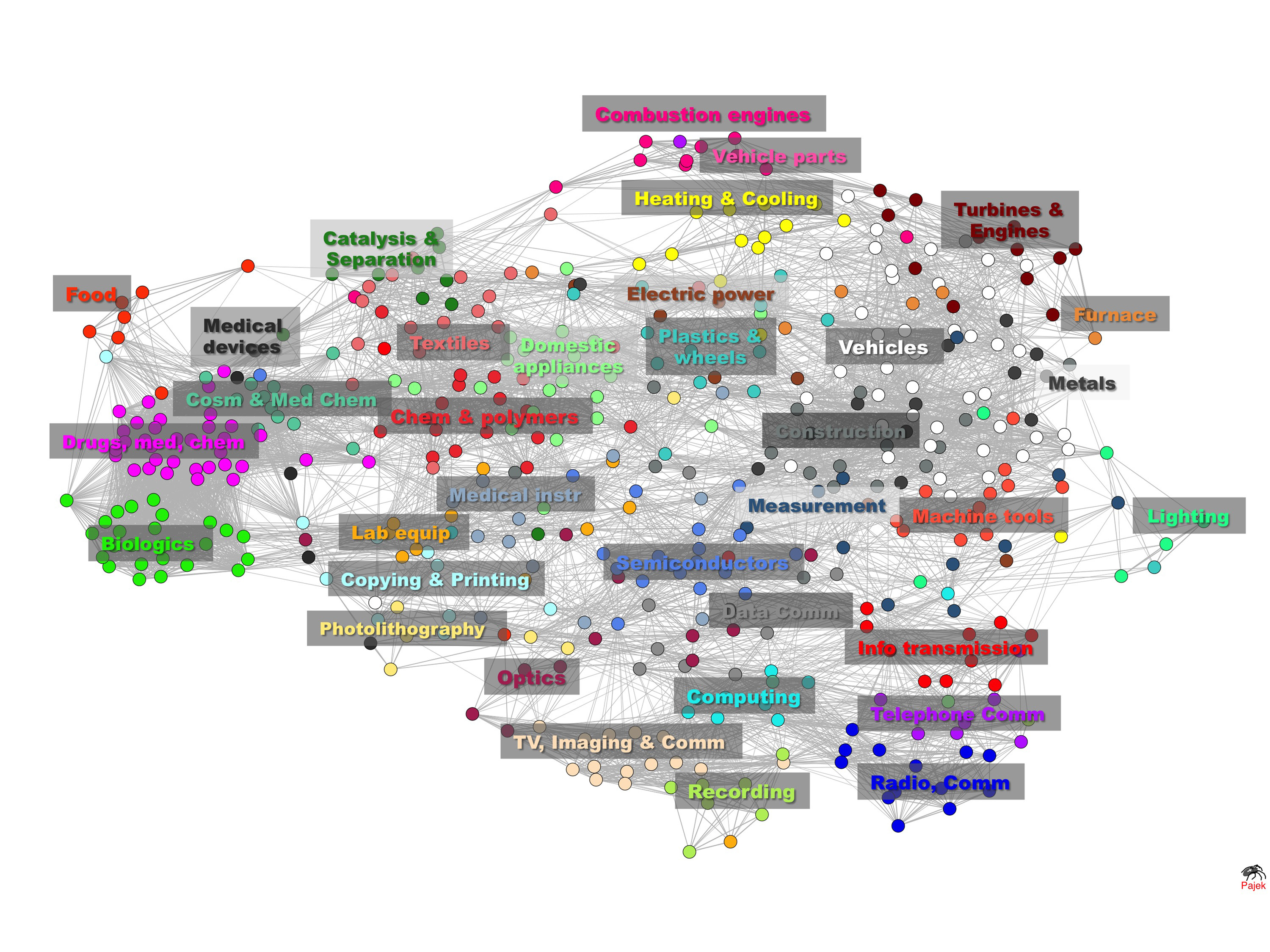 What’s likely to be the “next big thing?” What might be the most fertile areas for innovation? Where should countries and companies invest their limited research funds? What technology areas are a company’s competitors pursuing?

To help answer those questions, researchers, policy-makers and R&D directors study patent maps, which provide a visual representation of where universities, companies and other organizations are protecting intellectual property produced by their research. But finding real trends in these maps can be difficult because categories with large numbers of patents – pharmaceuticals, for instance – are usually treated the same as areas with few patents.

Now, a new patent mapping system that considers how patents cite one another may help researchers better understand the relationships between technologies – and how they may come together to spur disruptive new areas of innovation. The system, which also categorizes patents in a new way, was produced by a team of researchers from three universities and an Atlanta-based producer of data-mining software.

“What we are trying to do is forecast innovation pathways,” said Alan Porter, professor emeritus in the School of Public Policy and the School of Industrial and Systems Engineering at the Georgia Institute of Technology and the project’s principal investigator. “We take data on research and development, such as publications and patents, and we try to elicit some intelligence to help us gain a sense for where things are headed.”

Patent maps for major corporations can show where those firms plan to diversify, or conversely, where their technological weaknesses are. Looking at a nation’s patent map might also suggest areas where R&D should be expanded to support new areas of innovation, or to fill gaps that may hinder economic growth, he said.

Innovation often occurs at the intersection of major technology sectors, noted Jan Youtie, director of policy research services in Georgia Tech’s Enterprise Innovation Institute. Studying the relationships between different areas can help suggest where the innovation is occurring and what technologies are fueling it. Patent maps can also show how certain disciplines evolve.

“You can see where the portfolio is, and how it is changing,” explained Youtie, who is also an adjunct associate professor in the Georgia Tech School of Public Policy. “In the case of nanotechnology, for example, you can see that most of the patents are in materials and physics, though over time the number of patents in the bio-nano area is growing.”

The patent mapping research, which was supported by the National Science Foundation, will be described in a paper to be published in an upcoming issue of the Journal of the American Society for Information Science and Technology (JASIST). In addition to Youtie and Porter, the research was conducted by former Georgia Tech graduate student Luciano Kay, now a postdoctoral scholar at the Center for Nanotechnology in Society at the University of California Santa Barbara.

“The goal for this research was to create a new type of global patent map that was not tied into existing patent classification systems,” Kay said. “We also wanted an approach that would classify patents into categories or clusters in a graphical representation of interrelated technologies even though they may be located in different sections and levels of the standard patent classification.”

The International Patent Classification (IPC) system is based on a hierarchy of eight top-level classes such as “human necessity” and “electricity.” Patent applications are further classified into 600 or so sub-classes beneath the top-level classes.

The new Patent Overlay Mapping system does away with this hierarchy, and instead considers the similarity between technologies by noting connections between patents – which ones are cited by other patents.

“We completely disaggregated the patient classification system and looked at all the categories with at least a thousand patents,” Youtie explained. “We think our map gets closer to measuring the ideas of technological similarity and distance.”

Maps produced by the system provide visual information relating the distances between technologies. The maps can also highlight the density of patenting activity, showing where investments are being made. And they can show gaps where future R&D investments may be needed to provide connections between related technologies.

The researchers produced a series of patent maps by applying their new system to 760,000 patent records filed in the European Patent Office between 2000 and 2006. The data came from the PatStat database, and was analyzed using a variety of tools, including the VantagePoint software developed by Search Technology of Norcross, along with Georgia Tech and Intelligent Information Services Corporation.

One surprise in the work was the interdisciplinary nature of many of the 35 patent factors the researchers identified. For instance, the classification “vehicles” included six of the eight sections defined by the IPC system.  Only five of the 35 factors were confined to a single section, Youtie said.

Because the researchers adopted a new classification system, other researchers wanting to follow their approach will have use a thesaurus that translates existing IPC classes to the new system. That conversion system is available online.

This research was supported by the National Science Foundation (NSF) through the Center for Nanotechnology in Society at Arizona State University (Award No. 0531194) and NSF Award No. 1064146. The research was also undertaken in collaboration with the Center for Nanotechnology in Society, University of California Santa Barbara (NSF Awards No. 0938099 and No. 0531184). The findings and observations contained in this paper are those of the authors and do not necessarily reflect the views of the NSF.