In Vitro Innovation: Testing Nanomedicine With Blood Cells On A Microchip

Scientists have engineered a microchip coated with blood vessel cells to learn more about the conditions under which nanoparticles accumulate in the plaque-filled arteries of patients with atherosclerosis, the underlying cause of myocardial infarctio 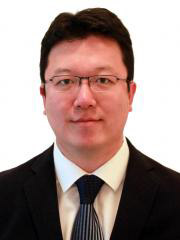 YongTae (Tony) Kim, an assistant professor in bioengineering in the George W. Woodruff School of Mechanical Engineering at the Georgia Institute of Technology, who led the research.

Designing nanomedicine to combat diseases is a hot area of scientific research, primarily for treating cancer, but very little is known in the context of atherosclerotic disease. Scientists have engineered a microchip coated with blood vessel cells to learn more about the conditions under which nanoparticles accumulate in the plaque-filled arteries of patients with atherosclerosis, the underlying cause of myocardial infarction and stroke.

In the research, microchips were coated with a thin layer of endothelial cells, which make up the interior surface of blood vessels. In healthy blood vessels, endothelial cells act as a barrier to keep foreign objects out of the bloodstream. But at sites prone to atherosclerosis, the endothelial barrier breaks down, allowing things to move in and out of arteries that shouldn’t.

In a new study, nanoparticles were able to cross the endothelial cell layer on the microchip under conditions that mimic the permeable layer in atherosclerosis. The results on the microfluidic device correlated well with nanoparticle accumulation in the arteries of an animal model with atherosclerosis, demonstrating the device’s capability to help screen nanoparticles and optimize their design.

“It’s a simple model — a microchip, not cell culture dish — which means that a simple endothelialized microchip with microelectrodes can show some yet important prediction of what’s happening in a large animal model,” said YongTae (Tony) Kim, an assistant professor in bioengineering in the George W. Woodruff School of Mechanical Engineering at the Georgia Institute of Technology.

The research was published in January online in the journal Proceedings of the National Academy of Sciences. This work represents a multidisciplinary effort of researchers that are collaborating within the Program of Excellence in Nanotechnology funded by the National Heart, Lung, and Blood Institute, the National Institutes of Health (NIH). The team includes researchers at the David H. Koch Institute for Integrative Cancer Research at MIT, the Icahn School of Medicine at Mount Sinai, the Academic Medical Center in Amsterdam, Kyushu Institute of Technology in Japan, and the Boston University School of Medicine and Harvard Medical School.

Kim began the work as his post-doctoral fellow at the Massachusetts Institute of Technology (MIT) in the lab of Robert Langer.

“This is a wonderful example of developing a novel nanotechnology approach to address an important medical problem,” said Robert Langer, the David H. Koch Institute Professor at Massachusetts Institute of Technology, who is renowned for his work in tissue engineering and drug delivery.

Kim and Langer teamed up with researchers from Icahn School of Medicine at Mount Sinai in New York. Mark Lobatto, co-lead author works in the laboratories of Willem Mulder, an expert in cardiovascular nanomedicine and Zahi Fayad, the director of Mount Sinai’s Translational and Molecular Imaging Institute.

The researchers hope that their microchip can accelerate the nanomedicine development process by better predicting therapeutic nanoparticles’ performance in larger animal models, such as rabbits. Such a complimentary in vitro model would save time and money and require fewer animals.

Few nanoparticle-based drug delivery systems, compared to proposed studies, have been approved by the U.S. Food and Drug Administration, Kim said. The entire process developing one nanomedicine platform can take 15 years to go from idea to synthesis to testing in vitro to testing in vivo to approval.

To help speed up nanomedicine research by improving the predictive capabilities of in vitro testing, Kim and colleagues designed their microchip to mimic what’s going on in the body better than what is currently possible through routine cell culture.

“In the future, we can make microchips that are much more similar to what’s going on in animal models, or even human beings, compared to the conventional cell culture dish studies,” Kim said.

The microchips allows for precise control of the mechanical and chemical environment around the living cells. By using the microchip, the researchers can create physiologically relevant conditions to cells by altering the rate of blood flow across the cells or by introducing a chemical that is released by the body during inflammation.

Kim said that while this microchip-based system offers better predictability than current cell culture experiments, it won’t replace the need for the animal studies, which provide a relatively more complete picture of how well a particular nanomedicine might work in humans.

“This is better than an in vitro dish experiment, but it’s not going to perfectly replicate what’s going on inside the body in near future,” Kim said. “It will help make this whole process faster and save a number of animals.”

This research is supported by the National Heart, Lung, and Blood Institute as a Program of Excellence in Nanotechnology Award (HHSN268201000045C), the National Cancer Institute (NCI) (CA151884); the David H. Koch Prostate Cancer Foundation Award in Nanotherapeutics, and the National Institutes of Health (NIH) (R01 EB009638 and R01CA155432). Any conclusions or opinions are those of the authors and do not necessarily represent the official views of the sponsoring agencies. 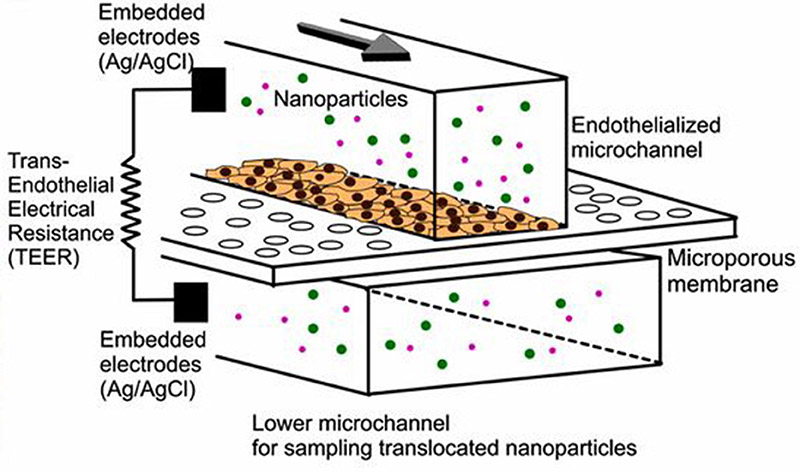 Schematic of an endothelialized microfluidic device that consists of two-layer microfluidic channels that are separated by a porous membrane (3 μm pore) on which endothelial cells are grown. Credit: Kim/PNAS.