Using electrons more like photons could provide the foundation for a new type of electronic device that would capitalize on the ability of graphene to carry electrons with almost no resistance. 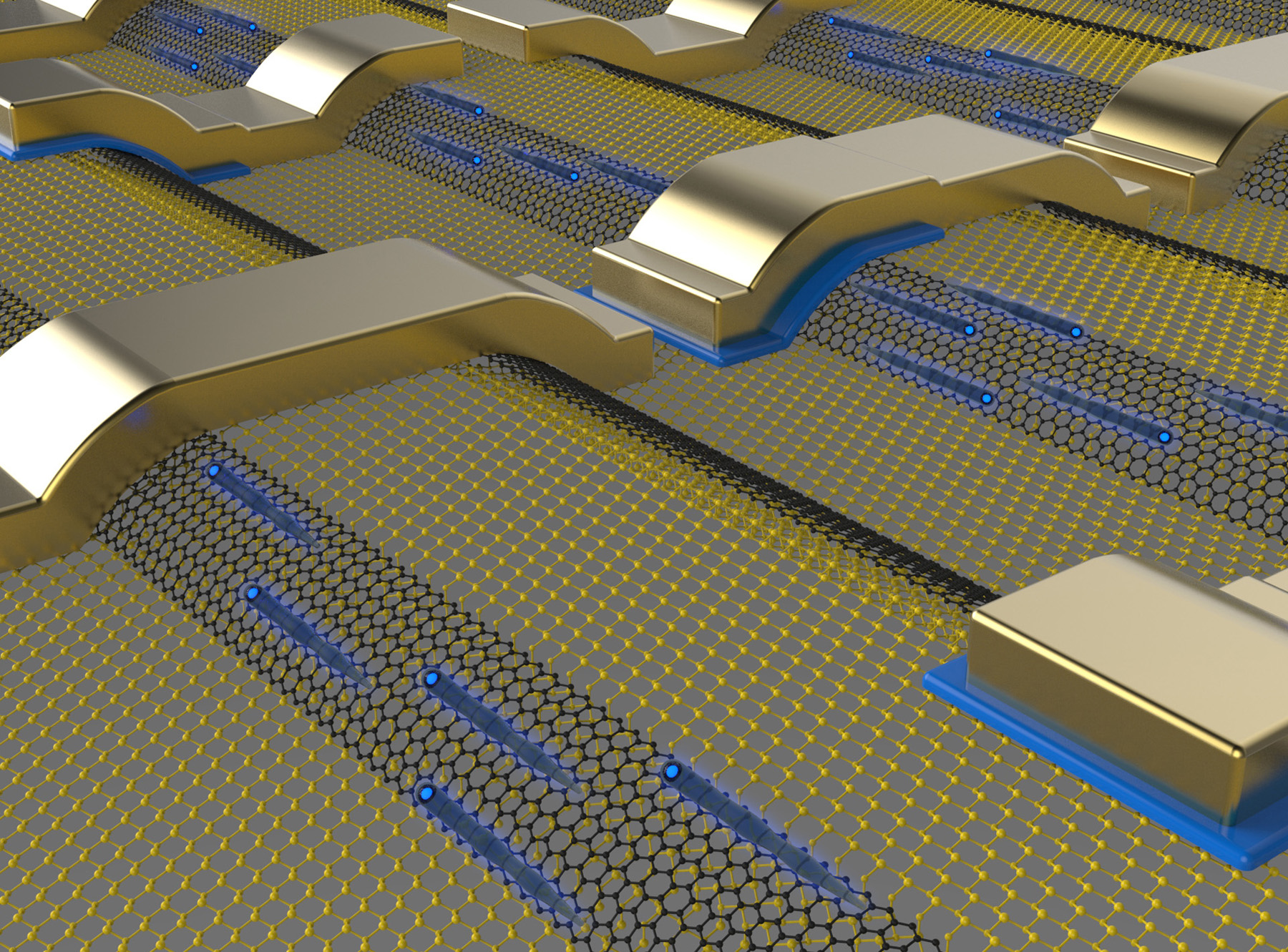 Conceptual drawing of an electronic circuit comprised of interconnected graphene nanoribbons (black atoms) that are epitaxially grown on steps etched in silicon carbide (yellow atoms).  Electrons (blue) travel ballistically along the ribbon and then from one ribbon to the next via the metal contacts. Electron flow is modulated by electrostatic gates. (Image courtesy of John Hankinson)

Using electrons more like photons could provide the foundation for a new type of electronic device that would capitalize on the ability of graphene to carry electrons with almost no resistance even at room temperature – a property known as ballistic transport.

Research reported this week shows that electrical resistance in nanoribbons of epitaxial graphene changes in discrete steps following quantum mechanical principles. The research shows that the graphene nanoribbons act more like optical waveguides or quantum dots, allowing electrons to flow smoothly along the edges of the material. In ordinary conductors such as copper, resistance increases in proportion to the length as electrons encounter more and more impurities while moving through the conductor.

The ballistic transport properties, similar to those observed in cylindrical carbon nanotubes, exceed theoretical conductance predictions for graphene by a factor of 10. The properties were measured in graphene nanoribbons approximately 40 nanometers wide that had been grown on the edges of three-dimensional structures etched into silicon carbide wafers.

“This work shows that we can control graphene electrons in very different ways because the properties are really exceptional,” said Walt de Heer, a Regent’s professor in the School of Physics at the Georgia Institute of Technology. “This could result in a new class of coherent electronic devices based on room temperature ballistic transport in graphene. Such devices would be very different from what we make today in silicon.”

The research, which was supported by the National Science Foundation, the Air Force Office of Scientific Research and the W.M. Keck Foundation, was reported February 5 in the journal Nature. The research was done through a collaboration of scientists from Georgia Tech in the United States, Leibniz Universität Hannover in Germany, the Centre National de la Recherche Scientifique (CNRS) in France and Oak Ridge National Laboratory – supported by the Department of Energy – in the United States.

For nearly a decade, researchers have been trying to use the unique properties of graphene to create electronic devices that operate much like existing silicon semiconductor chips. But those efforts have met with limited success because graphene – a lattice of carbon atoms that can be made as little as one layer thick – cannot be easily given the electronic bandgap that such devices need to operate.

De Heer argues that researchers should stop trying to use graphene like silicon, and instead use its unique electron transport properties to design new types of electronic devices that could allow ultra-fast computing – based on a new approach to switching. Electrons in the graphene nanoribbons can move tens or hundreds of microns without scattering.

“The electrons hit the probe and scatter,” explained de Heer. “It’s a lot like a stream in which water is flowing nicely until you put rocks in the way. We have done systematic studies to show that when you touch the nanoribbons with a probe, you introduce a method for the electrons to scatter, and that changes the resistance.”

The nanoribbons are grown epitaxially on silicon carbon wafers into which patterns have been etched using standard microelectronics fabrication techniques. When the wafers are heated to approximately 1,000 degrees Celsius, silicon is preferentially driven off along the edges, forming graphene nanoribbons whose structure is determined by the pattern of the three-dimensional surface. Once grown, the nanoribbons require no further processing.

The advantage of fabricating graphene nanoribbons this way is that it produces edges that are perfectly smooth, annealed by the fabrication process. The smooth edges allow electrons to flow through the nanoribbons without disruption. If traditional etching techniques are used to cut nanoribbons from graphene sheets, the resulting edges are too rough to allow ballistic transport.

“It seems that the current is primarily flowing on the edges,” de Heer said. “There are other electrons in the bulk portion of the nanoribbons, but they do not interact with the electrons flowing at the edges.”

The researchers measured ballistic conductance in the graphene nanoribbons for up to 16 microns. Electron mobility measurements surpassing one million correspond to a sheet resistance of one ohm per square that is two orders of magnitude lower than what is observed in two-dimensional graphene – and ten times smaller than the best theoretical predictions for graphene.

“This should enable a new way of doing electronics,” de Heer said. “We are already able to steer these electrons and we can switch them using rudimentary means. We can put a roadblock, and then open it up again. New kinds of switches for this material are now on the horizon.”

Theoretical explanations for what the researchers have measured are incomplete. De Heer speculates that the graphene nanoribbons may be producing a new type of electronic transport similar to what is observed in superconductors.

“There is a lot of fundamental physics that needs to be done to understand what we are seeing,” he added. “We believe this shows that there is a real possibility for a new type of graphene-based electronics.”

Georgia Tech researchers have pioneered graphene-based electronics since 2001, for which they hold a patent, filed in 2003. The technique involves etching patterns into electronics-grade silicon carbide wafers, then heating the wafers to drive off silicon, leaving patterns of graphene.

This research was supported by the National Science Foundation (NSF) Materials Research Science and Engineering Center (MRSEC) at Georgia Tech through award DMR-0820382; the Air Force Office of Scientific Research (AFOSR); the Scientific User Facilities Division, Office of Basic Energy Sciences, U.S. Department of Energy, and the Partner University Fund from the Embassy of France. Any conclusions or recommendations are those of the authors and do not necessarily represent the official views of the NSF, DOE or AFOSR. 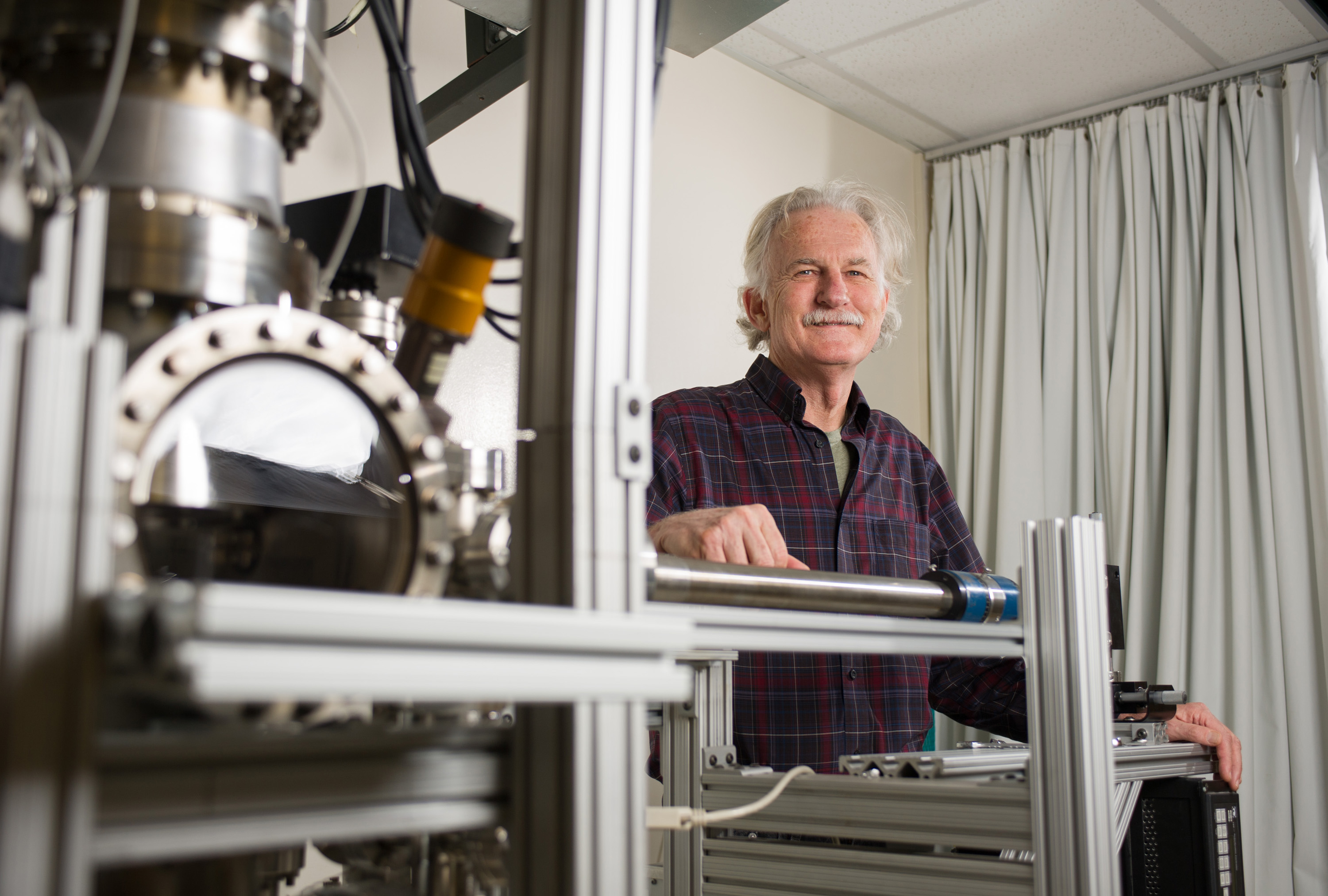 Walt de Heer, a Regent’s professor in the School of Physics at the Georgia Institute of Technology, poses with equipment used to measure the properties of graphene nanoribbons. De Heer and collaborators from three other institutions have reported ballistic transport properties in graphene nanoribbons that are about 40 nanometers wide. (Georgia Tech Photo: Rob Felt)