Flowing Water on Mars Appears Likely But Hard to Prove 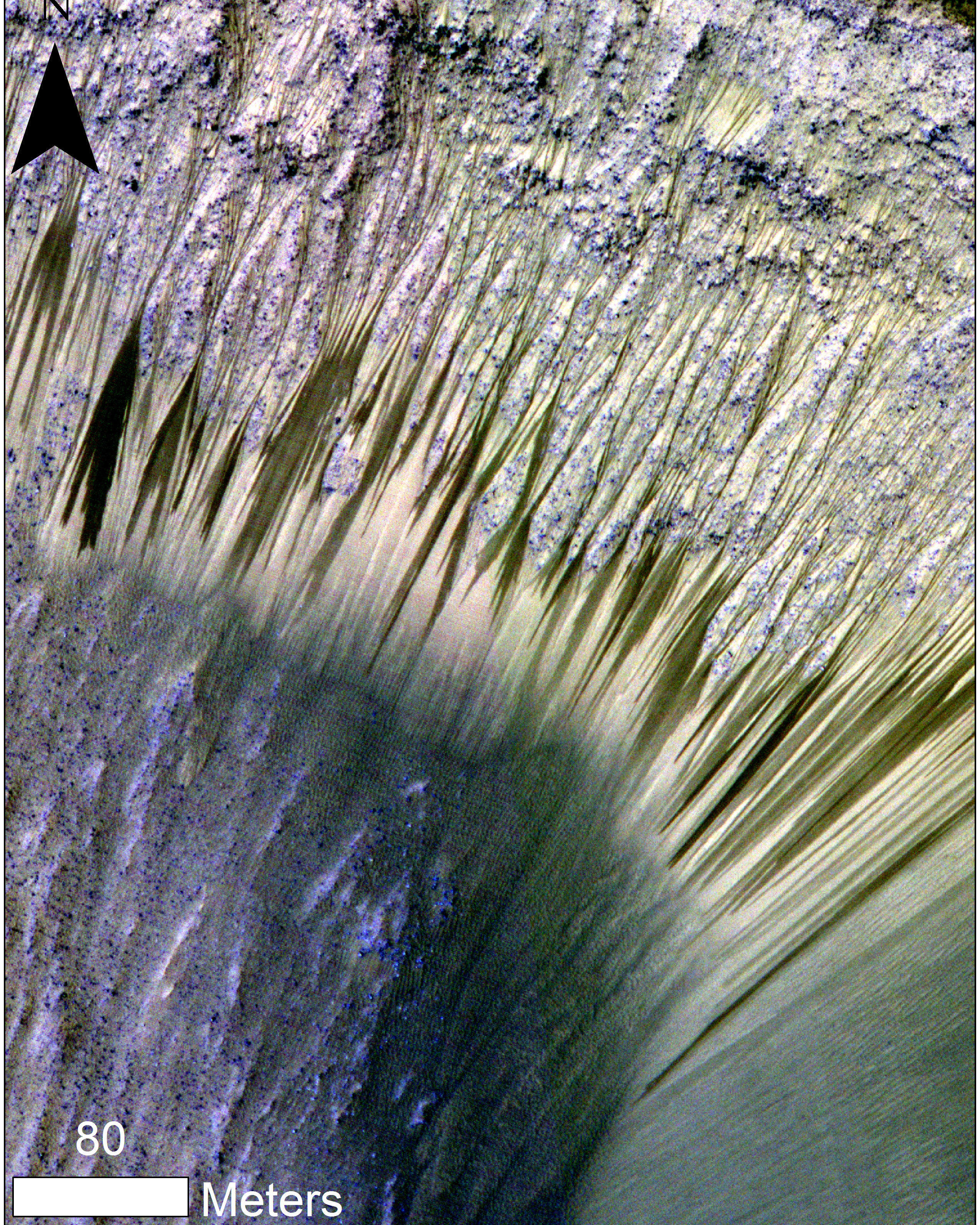 Martian experts have known since 2011 that mysterious, possibly water-related streaks appear and disappear on the planet’s surface. Georgia Institute of Technology Ph.D. candidate Lujendra Ojha discovered them while an undergraduate at the University of Arizona. These features were given the descriptive name of recurring slope lineae (RSL) because of their shape, annual reappearance and occurrence generally on steep slopes such as crater walls. Ojha has been taking a closer look at this phenomenon, searching for minerals that RSL might leave in their wake, to try to understand the nature of these features: water-related or not?

Ojha and Georgia Tech Assistant Professor James Wray looked at 13 confirmed RSL sites using Compact Reconnaissance Imaging Spectrometer for Mars (CRISM) images. They didn’t find any spectral signature tied to water or salts. But they did find distinct and consistent spectral signatures of ferric and ferrous minerals at most of the sites. The minerals were more abundant or featured distinct grain sizes in RSL-related materials as compared to non-RSL slopes.

“We still don’t have a smoking gun for existence of water in RSL, although we’re not sure how this process would take place without water,” said Ojha. “Just like the RSL themselves, the strength of the spectral signatures varies according to the seasons. The signatures are stronger when it’s warmer and less significant when it’s colder.”

The research team also notes that the lack of water-related absorptions rules out hydrated salts as a spectrally dominant phase on RSL slopes. For example, ferric sulfates have been found elsewhere on Mars and are a potent antifreeze. If such salts are present in RSL, then they must be dehydrated considerably under exposure to the planet’s conditions by the time CRISM observes them in the mid-afternoon.

The findings were recently published in Geophysical Research Letters, and the Georgia Tech duo’s newest paper, published in the journal Icarus, indicates that predicting where RSL will appear is, at best, a guessing game.

Ojha, Wray, and several Arizona-based colleagues looked at every image gathered by the High Resolution Imaging Science Experiment (HiRISE) from March to October of 2011. They hunted for areas that were ideal locations for RSL formation: areas near the southern mid-latitudes on rocky cliffs. They found 200, but barely any of them had RSL.

“Only 13 of the 200 locations had confirmed RSL,” said Ojha. “There were significant differences in abundance and size between sites, indicating that additional unknown factors such as availability of water or salts may play a crucial role in RSL formation.”

Comparing their new observations with images taken in previous years, the team also found that RSL are much more abundant some years than others. Water on Mars today seems elusive at best – there one year, gone the next.

“NASA likes to ‘follow the water’ in exploring the red planet, so we’d like to know in advance when and where it will appear,” Wray said. “RSL have rekindled our hope of accessing modern water, but forecasting wet conditions remains a challenge.”

Ojha and Wray are also among several co-authors on another RSL-related paper published this month in Nature Geoscience. That study, led by the University of Arizona’s Alfred McEwen, found some RSL in Valles Marineris, near the Martian equator. 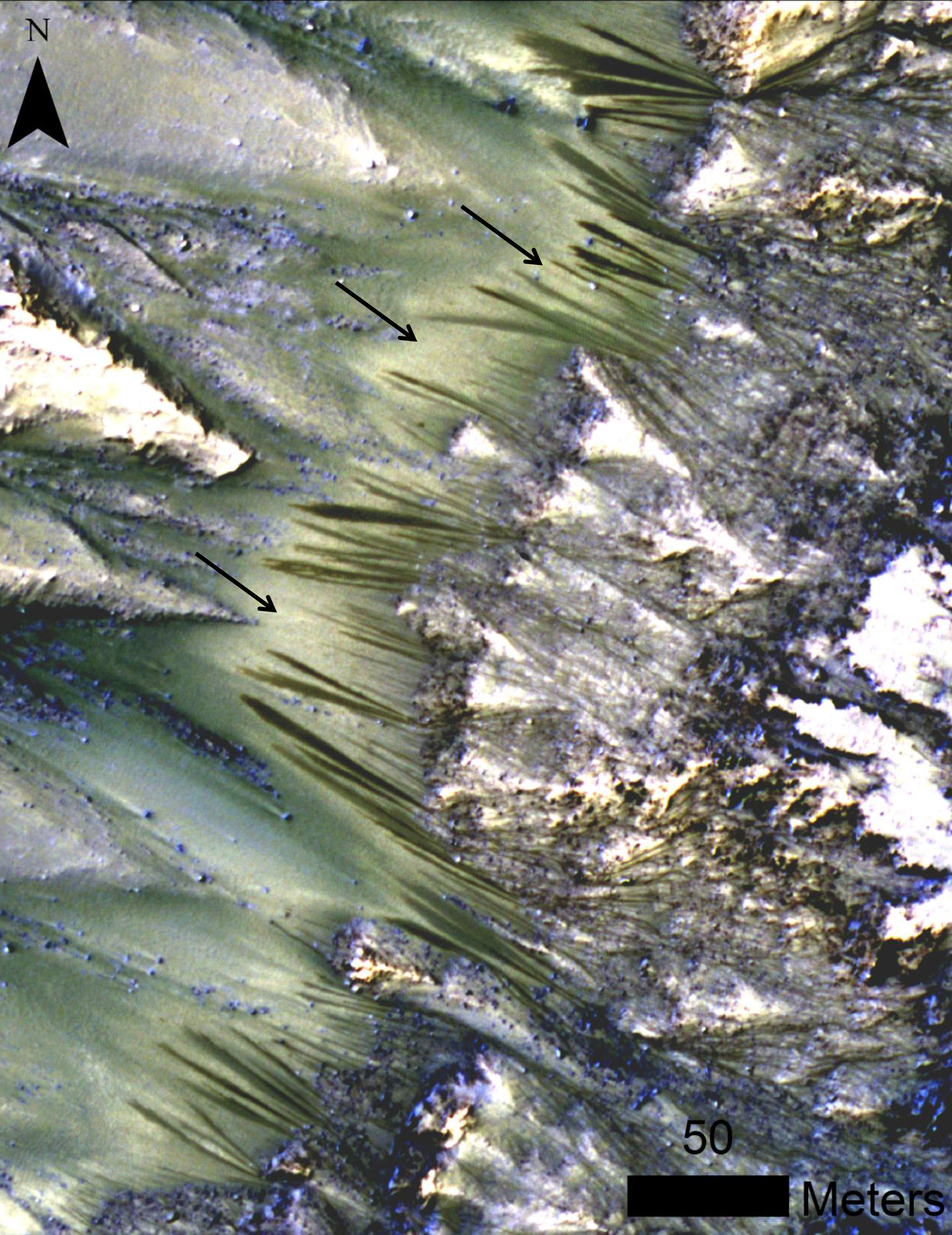 Dark flow like features called Recurring Slope Lineae emanating from bedrock exposures at Palikir crater on Mars during southern summer. These flows are observed to form and grow during warm seasons when surface temperature is hot enough for salty ice to melt, and fade or completely disappear in cold season. Arrows point to bright, smooth fans left behind by flows.