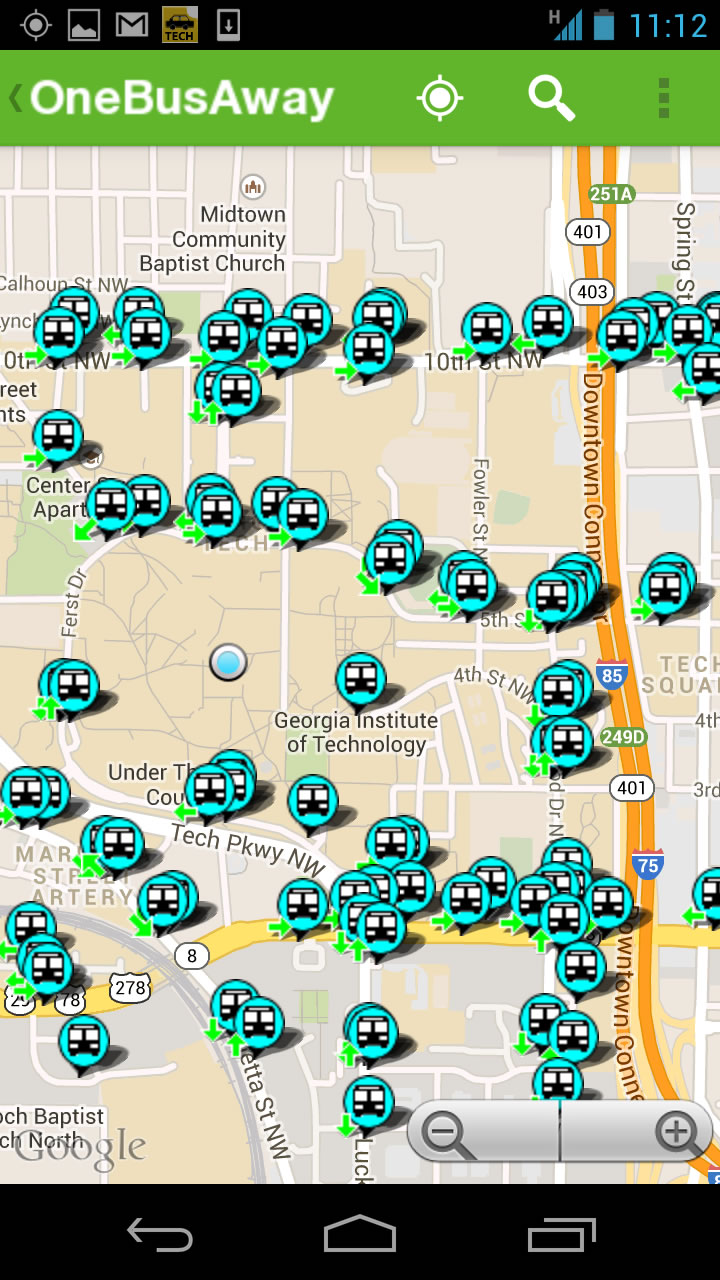 OneBusAway also has information on MARTA buses and Georgia Tech shuttles, and plans to expand to include other regional transit agencies.

The mobile app OneBusAway, which tracks public transportation in real time, now includes arrival times for MARTA trains in addition to the MARTA buses and Georgia Tech shuttles already featured in the app.

“This app helps people who want the information before they get to the train station or bus stop,” said Kari Watkins, an assistant professor in the School of Civil and Environmental Engineering at Georgia Tech. “For bus and shuttle stops where there is no sign for next arrivals this app is the rider’s only source of information.”

OneBusAway is free to download and has information on transit systems in Atlanta, Seattle and Tampa. The app automatically recognizes which city the user is in, and captures data from the local transit source. The coding for the transit-tracking app was used to develop New York City’s MTA Bus Time.

The app gathers real-time location data by tapping GPS units already installed on buses and trains. Recently, MARTA made their GPS data publicly available so that software developers might use it to build apps and other tools to improve the rider experience. Riders can search OneBusAway for nearby train and bus stops and receive up-to-the-minute arrival and departure information.

MARTA also has a real-time transit-tracking app that provides information exclusively for its bus and train network.

“One of our priorities is improving the overall customer experience through the use of technology,” said Keith T. Parker, MARTA’s CEO. “That’s why we launched the On-the-Go mobile app providing real-time train and bus arrivals. We’re also excited to work with OneBusAway, and the metro Atlanta tech community, in developing solutions that will help retain and attract transit riders.”

OneBusAway’s ability to combine data on multiple transit agencies in the Atlanta region might be one way to attract riders, by helping them transfer more easily between transit systems.

“The goal is to make OneBusAway multiagency, multiregional and multimodal,” said Watkins, who co-founded the app while at the University of Washington in Seattle and is known on Twitter as @transitmom.

The program is funded by Georgia Tech’s Institute for People and Technology (IPaT), Georgia Tech’s Graphics, Visualization, and Usability (GVU) Center, the National Center for Transportation Systems Productivity and Management and a U.S. Department of Transportation Eisenhower Fellowship.

The idea behind the app is to take a lot of the guesswork out of riding public transportation. When riders are still at their desks, at home or in a coffee shop, they can open the app on their smartphone or computer, search for nearby transit options, and know exactly how many minutes they have until the next bus or train arrives.

Watkins and Candace Brakewood, a PhD student with Watkins’ group, are launching a new study in April that seeks to quantify how real-time transit information affects ridership through studies in Atlanta and New York City.

Prior studies from Watkins and colleagues of the OneBusAway app in Seattle and Tampa found that the app’s users have a more favorable view of transit, feel safer on transit, spend less time waiting on buses and trains and report riding transit more.

OneBusAway utilizes open-source software, so enterprising transit riders can suggest tweaks to the app or develop their own transit-arrival signs. On the web, OneBusAway features a mode that is compatible with large displays, so that businesses near transit can display real-time information for patrons wishing to ride a bus or train.

Someday, Watkins envisions, transit riders will have an app that knows their route to work, what time they want to arrive, and sends alerts if a bus or train is going to be early or late.

“It gives back some of the power you give away as a transit rider,” Watkins said.
Watkins is a Georgia Tech alumna (CE 97) and was recently named to Mass Transit Magazine’s 40 Under 40 list. Her Cycle Atlanta and OneBusAway apps have been making the rounds in local and national media for the ways they could change how people commute. She’s also been an expert source for transportation stories by NPR and The Atlantic Cities.

“We’re all figuring out how we can optimize what we have and make better use of the space that exists,” Watkins said. “Even those who aren’t environmentally minded recognize the congestion and space issues and are tired of it. We have to make all our modes function better, which includes providing better information.”

Download the free apps for Android, iPhone and Windows Phone or visit atlanta.onebusaway.org for more information.

This research is supported by the National Center for Transportation Systems Productivity and Management, a U.S. Department of Transportation’s (DOT) Research and Innovative Technology Administration (RITA) University Transportation Center. Any conclusions or opinions are those of the authors and do not necessarily represent the official views of the sponsoring agency. 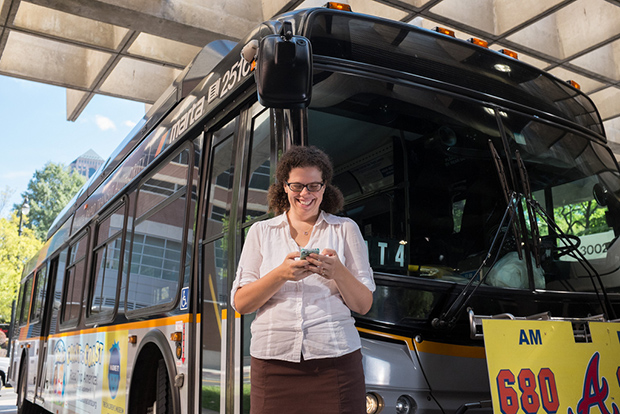 Kari Watkins, an assistant professor in the School of Civil and Environmental Engineering at Georgia Tech, co-founded the app while at the University of Washington in Seattle and is known on Twitter as @transitmom. 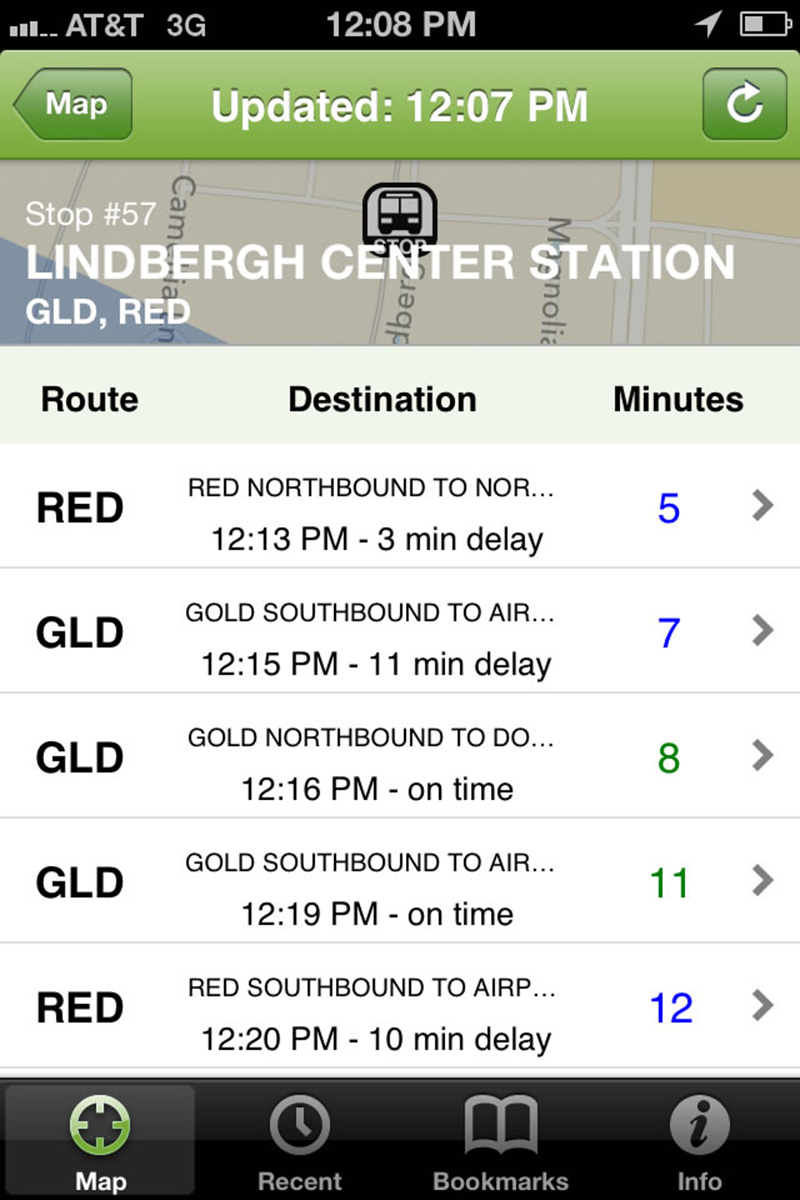