A new robotic system at Georgia Tech’s Center for Chemical Evolution could soon let scientists better simulate and analyze the chemical reactions of early Earth on the surface of real rocks. 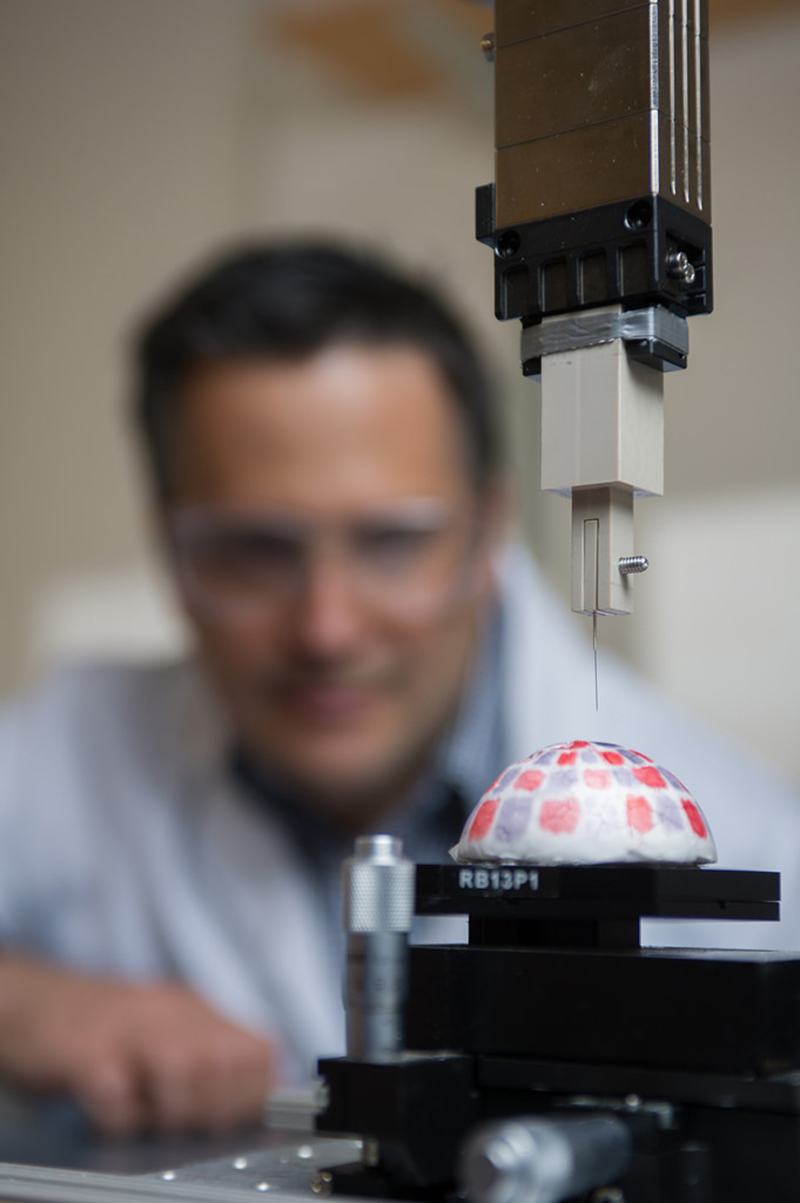 The scientists programmed the robotic arm to poke the sample with an acupuncture needle.

When life on Earth was first getting started, simple molecules bonded together into the precursors of modern genetic material. A catalyst would have been needed, but enzymes had not yet evolved. One theory is that the catalytic minerals on a meteorite’s surface could have jump-started life’s first chemical reactions. But scientists need a way to directly analyze these rough, irregularly shaped surfaces. A new robotic system at Georgia Tech’s Center for Chemical Evolution could soon let scientists better simulate and analyze the chemical reactions of early Earth on the surface of real rocks to further test this theory.

In a proof-of-concept study, scientists selected a region for analysis on round or irregularly-shaped objects using a 3-D camera on a robotic arm, which mapped the 3-dimentional coordinates of the sample’s surface. The scientists programmed the robotic arm to poke the sample with an acupuncture needle. The needle collected a small amount of material that the robot deposited in a nearby mass spectrometer, which is a powerful tool for determining a substance’s chemical composition.

“You see the object on a monitor and then you can point and click and take a sample from a particular spot and the robot will go there,” said Facundo Fernandez, a professor in the School of Chemistry and Biochemistry, whose lab led the study. “We’re using an acupuncture needle that will touch very carefully on the surface of the object and then the robot will turn around and put the material inside of a high resolution mass spectrometer.”

The research was published online February 28 in the journal Analyst, a publication of the Royal Society of Chemistry. The research will be featured on the cover of an upcoming print issue. The work was supported by a National Science Foundation (NSF) Major Research Instrumentation Program (MRI) grant and by the National Science Foundation (NSF) and NASA Astrobiology Program, under the NSF Center for Chemical Evolution.

Mass spectrometry is a powerful tool for analyzing surface chemistry or for identifying biological samples. It’s widely used in research labs across many disciplines, but samples for analysis typically have to be cleaned, carefully prepared, and in the case of rocks, cut into thin, flat samples. The new robotic system is the first report of a 3-D mass spectrometry native surface imaging experiment.

“Other people have used an acupuncture needle to poke a sample and then put that in mass spec, but nobody has tried to do a systematic, three-dimensional surface experiment,” Fernandez said. “We are trying to push the limits.”

To show that the system was capable of probing a three-dimensional object, the researchers imprinted ink patterns on the surfaces of polystyrene spheres. The team then used the robotic arm to model the surfaces, probe specific regions, and see if samples collected were sufficient for mass spectrometry analysis. The researchers were able to detect inks of different colors and create a 3-D image of the object with sufficient sensitivity for their proof-of-principle setup, Fernandez said.

The research was the result of collaboration between Fernandez’s group, which specializes in mass spectrometry, and Henrik Christensen’s robotics group in the College of Computing. Christensen is the KUKA Chair of Robotics and a Distinguished Professor of Computing. He is also the executive director of the Institute for Robotics and Intelligent Machines (IRIM) at Georgia Tech.

“The initial findings of this study mark a significant step toward using robots for three-dimensional surface experiments on geological material,” Christensen said. “We are using the repeatability and accuracy of robots to achieve new capabilities that have numerous applications in biomedical areas such as dermatology.”

“It doesn’t happen very often that a group in mass spectrometry will have a very talented robotics group next to them,” Fernandez said. “If we tried to learn the robotics on our own it could take us a decade, but for them it’s something that’s not that difficult.”

Christensen’s team loaned a Kuka KR5 sixx R650 robot to Fernandez’s lab for the study. Afterwards, Fernandez’s lab purchased their own robot from Universal Robots. They have also upgraded to a new mass spectrometer capable of resolution nearly eight times higher than the one used in the study. They will soon begin replicating early Earth chemistry on rocks and analyzing the reaction products with their robotic sampling system.

“We really want to look at rocks,” Fernandez said. “We want to do reactions on rocks and granites and meteorites and then see what can be produced on the surface.”

The technology could also be applied to other research fields, Fernandez said. For example, the robot-mass spec combo might be useful to dermatologists who often probe lesions on the skin, which have distinct molecular signatures depending on if the lesion is a tumor or normal skin tissue.

This research is supported by the American Recovery and Reinvestment Act (ARRA) under the National Science Foundation (NSF) Major Research Instrumentation Program (MRI) (Grant number 0923179), and by the NSF and NASA Astrobiology Program under the NSF Center for Chemical Evolution (CHE-1004579). Any conclusions or opinions are those of the authors and do not necessarily represent the official views of the sponsoring agencies. 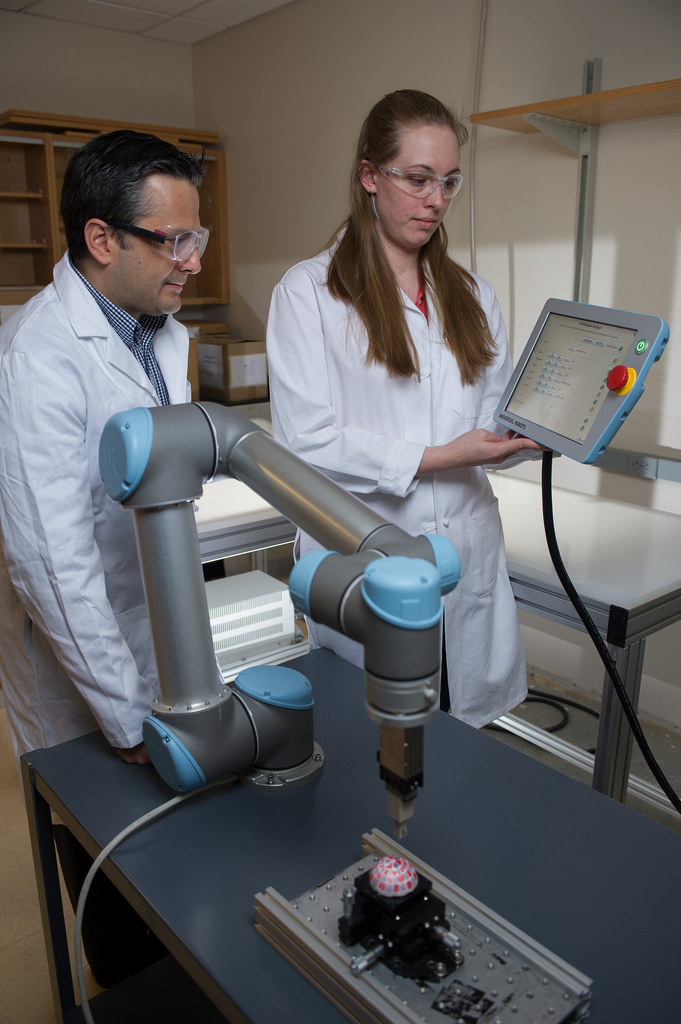 Facundo Fernandez (left) and Rachel Bennett, use a robotic arm to probe objects with irregularly-shaped surfaces for mass spectrometry.