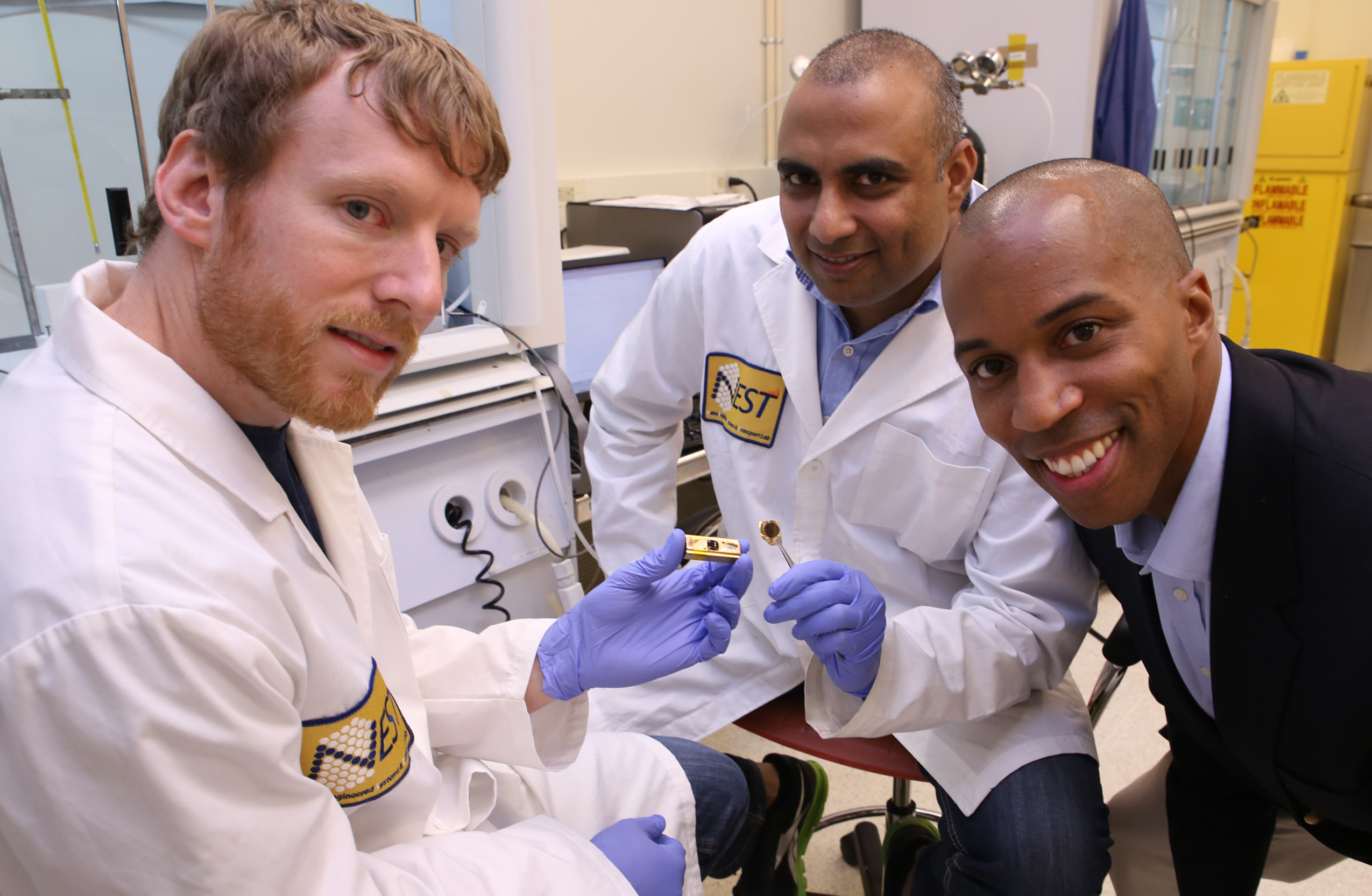 Polymer materials are usually thermal insulators. But by harnessing an electropolymerization process to produce aligned arrays of polymer nanofibers, researchers have developed a thermal interface material able to conduct heat 20 times better than the original polymer. The modified material can reliably operate at temperatures of up to 200 degrees Celsius.

The new thermal interface material could be used to draw heat away from electronic devices in servers, automobiles, high-brightness LEDs and certain mobile devices. The material is fabricated on heat sinks and heat spreaders and adheres well to devices, potentially avoiding the reliability challenges caused by differential expansion in other thermally-conducting materials.

“Thermal management schemes can get more complicated as devices get smaller,” said Baratunde Cola, an assistant professor in the George W. Woodruff School of Mechanical Engineering at the Georgia Institute of Technology. “A material like this, which could also offer higher reliability, could be attractive for addressing thermal management issues. This material could ultimately allow us to design electronic systems in different ways.”

The research, which was supported by the National Science Foundation, was reported March 30 in the advance online publication of the journal Nature Nanotechnology. The project involved researchers from the Georgia Institute of Technology, University of Texas at Austin, and the Raytheon Company. Virendra Singh, a research scientist in the Woodruff School, and Thomas Bougher, a Ph.D. student in the Woodruff School, are the paper’s co-first authors.

Amorphous polymer materials are poor thermal conductors because their disordered state limits the transfer of heat-conducting phonons. That transfer can be improved by creating aligned crystalline structures in the polymers, but those structures – formed through a fiber drawing processes – can leave the material brittle and easily fractured as devices expand and contract during heating and cooling cycles.

The new interface material is produced from a conjugated polymer, polythiophene, in which aligned polymer chains in nanofibers facilitate the transfer of phonons – but without the brittleness associated with crystalline structures, Cola explained. Formation of the nanofibers produces an amorphous material with thermal conductivity of up to 4.4 watts per meter Kelvin at room temperature.

The material has been tested up to 200 degrees Celsius, a temperature that could make it useful for applications in vehicles. Solder materials have been used for thermal interfaces between chips and heat sinks, but may not be reliable when operated close to their reflow temperatures.

“Polymers aren’t typically thought of for these applications because they normally degrade at such a low temperature,” Cola explained. “But these conjugated polymers are already used in solar cells and electronic devices, and can also work as thermal materials. We are taking advantage of the fact that they have a higher thermal stability because the bonding is stronger than in typical polymers.”

The structures are grown in a multi-step process that begins with an alumina template containing tiny pores covered by an electrolyte containing monomer precursors. When an electrical potential is applied to the template, electrodes at the base of each pore attract the monomers and begin forming hollow nanofibers. The amount of current applied and the growth time control the length of the fibers and the thickness of their walls, while the pore size controls the diameter. Fiber diameters range from 18 to 300 nanometers, depending on the pore template.

After formation of the monomer chains, the nanofibers are cross-linked with an electropolymerization process, and the template removed. The resulting structure can be attached to electronic devices through the application of a liquid such as water or a solvent, which spreads the fibers and creates adhesion through capillary action and van der Waals forces.

“With the electrochemical polymerization processing approach that we took, we were able to align the chains of the polymer, and the template appears to prevent the chains from folding into crystals so the material remained amorphous,” Cola explained. “Even though our material is amorphous from a crystalline standpoint, the polymer chains are highly aligned – about 40 percent in some of our samples.”

Though the technique still requires further development and is not fully understood theoretically, Cola believes it could be scaled up for manufacturing and commercialization. The new material could allow reliable thermal interfaces as thin as three microns – compared to as much as 50 to 75 microns with conventional materials.

“There are some challenges with our solution, but the process is inherently scalable in a fashion similar to electroplating,” he said. “This material is well known for its other applications, but ours is a different use.”

Engineers have been searching for an improved thermal interface material that could help remove heat from electronic devices. The problem of removing heat has worsened as devices have gotten both smaller and more powerful.

Rather than pursue materials because of their high thermal conductivity, Cola and his collaborators investigated materials that could provide higher levels of contact in the interface. That’s because in some of the best thermal interface materials, less than one percent of the material was actually making contact.

“I stopped thinking so much about the thermal conductivity of the materials and started thinking about what kinds of materials make really good contact in an interface,” Cola said. He decided to pursue polythiophene materials after reading a paper describing a “gecko foot” application in which the material provided an estimated 80 percent contact.

Samples of the material have been tested to 200 degrees Celsius through 80 thermal cycles without any detectable difference in performance. While further work will be necessary to understand the mechanism, Cola believes the robustness results from adhesion of the polymer rather than a bonding.

“We can have contact without a permanent bond being formed,” he said. “It’s not permanent, so it has a built-in stress accommodation. It slides along and lets the stress from thermal cycling relax out.”

A patent application has been filed on the material. Cola has formed a startup company, Carbice Nanotechnologies, to commercialize thermal interface technologies. It is a member of Georgia Tech’s VentureLab program.

This research was supported by the National Science Foundation (NSF) through award CBET-113071, a seed grant from the Georgia Tech Center for Organic Photonics and Electronics and an NSF-IGERT graduate fellowship. Any conclusions or opinions are those of the authors and do not necessarily represent the official views of the NSF. 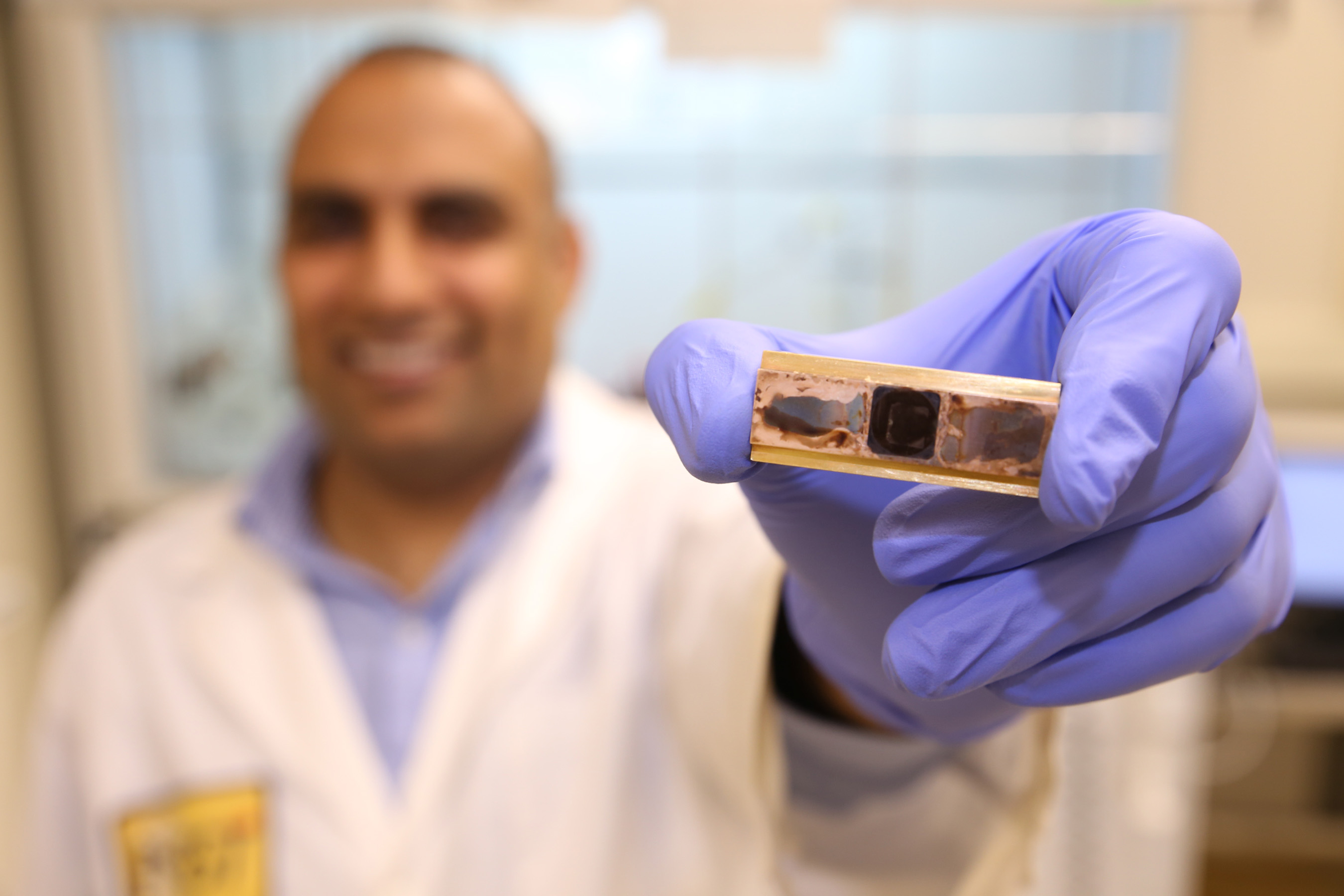 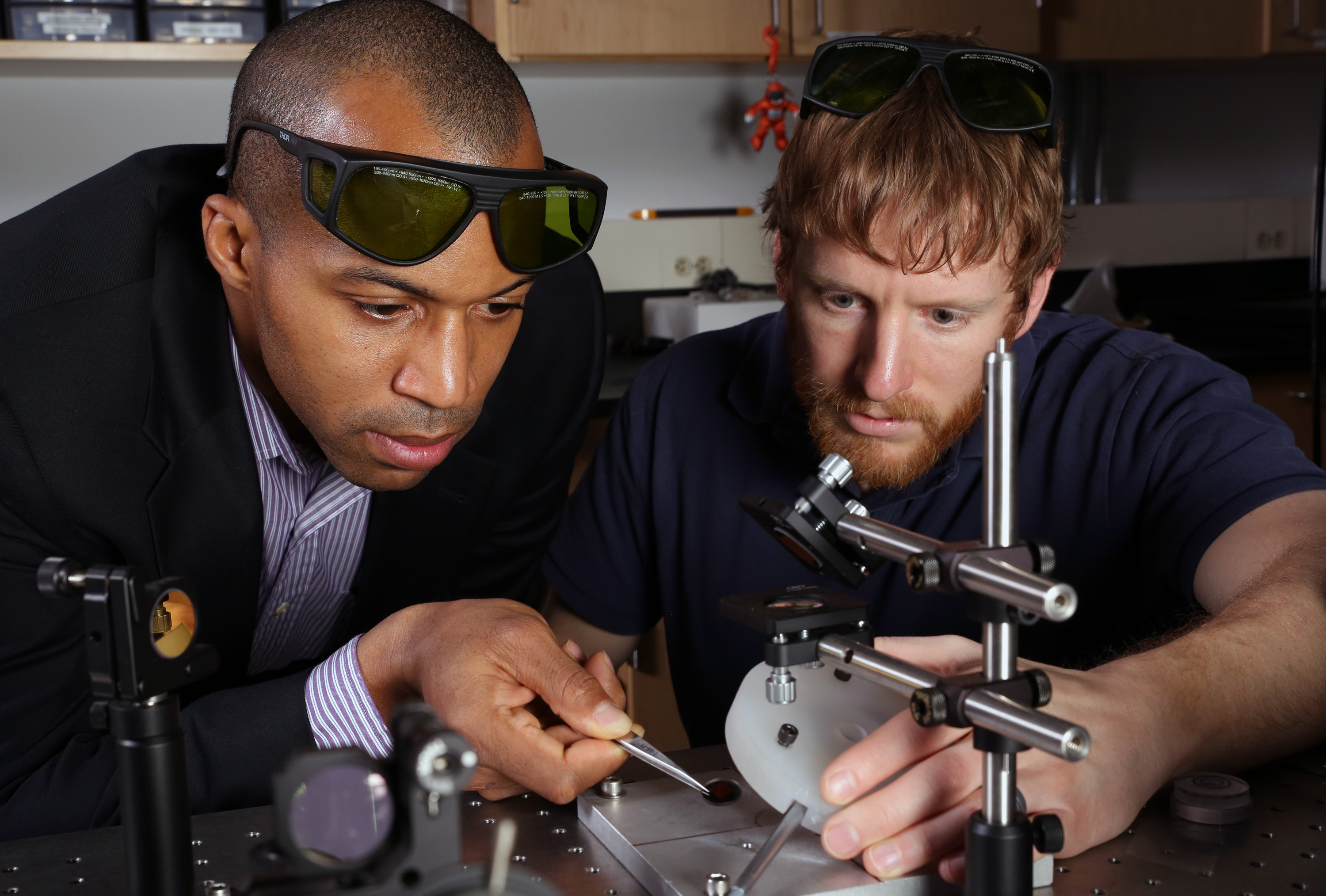 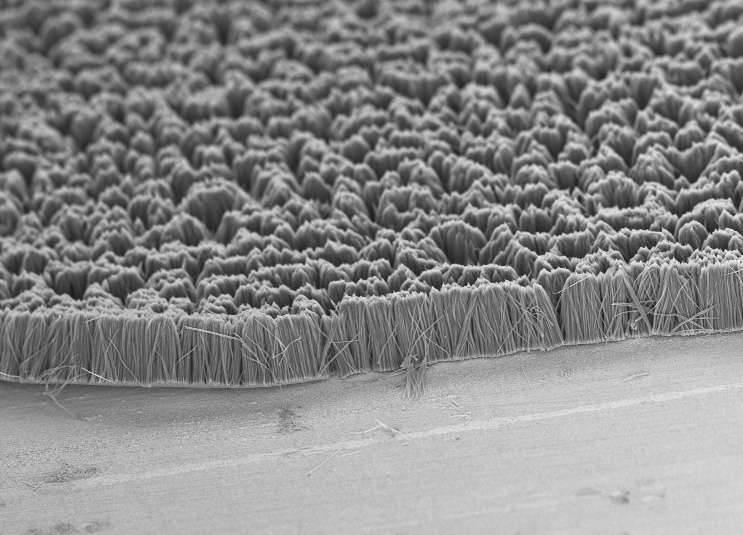 This scanning electron microscope image shows vertical polythiophene nanofiber arrays grown on a metal substrate. The arrays contained either solid fibers or hollow tubes, depending on the diameter of the pores used to grow them. (Credit: Virendra Singh) 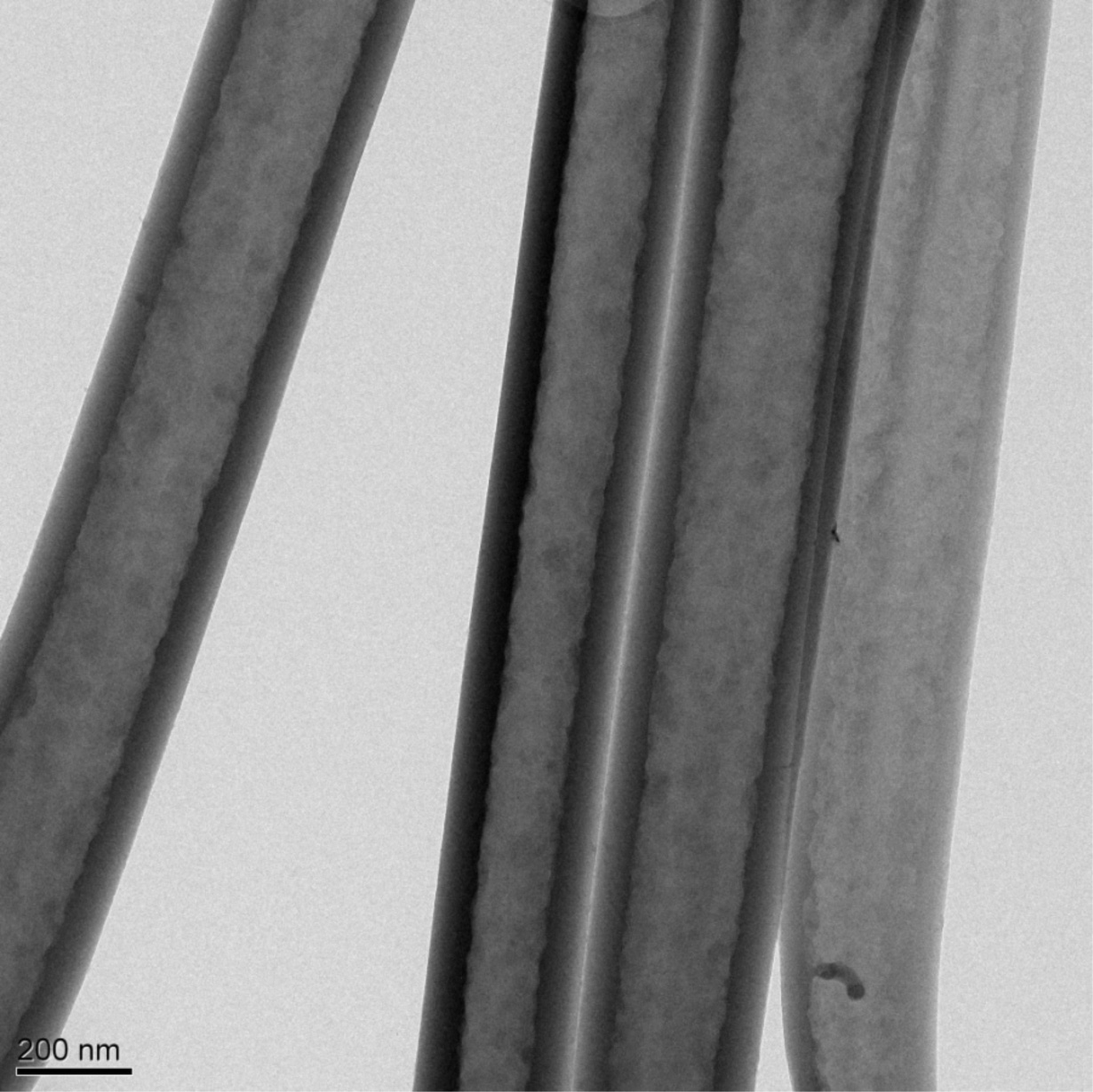 This transmission electron microscope image shows four polymer nanofibers with hollow structure. The thickness of the walls of the tubes ranged from 40 to 80 nanometers, depending on the amount of current applied and the growth time. (Credit: Ye Cai) 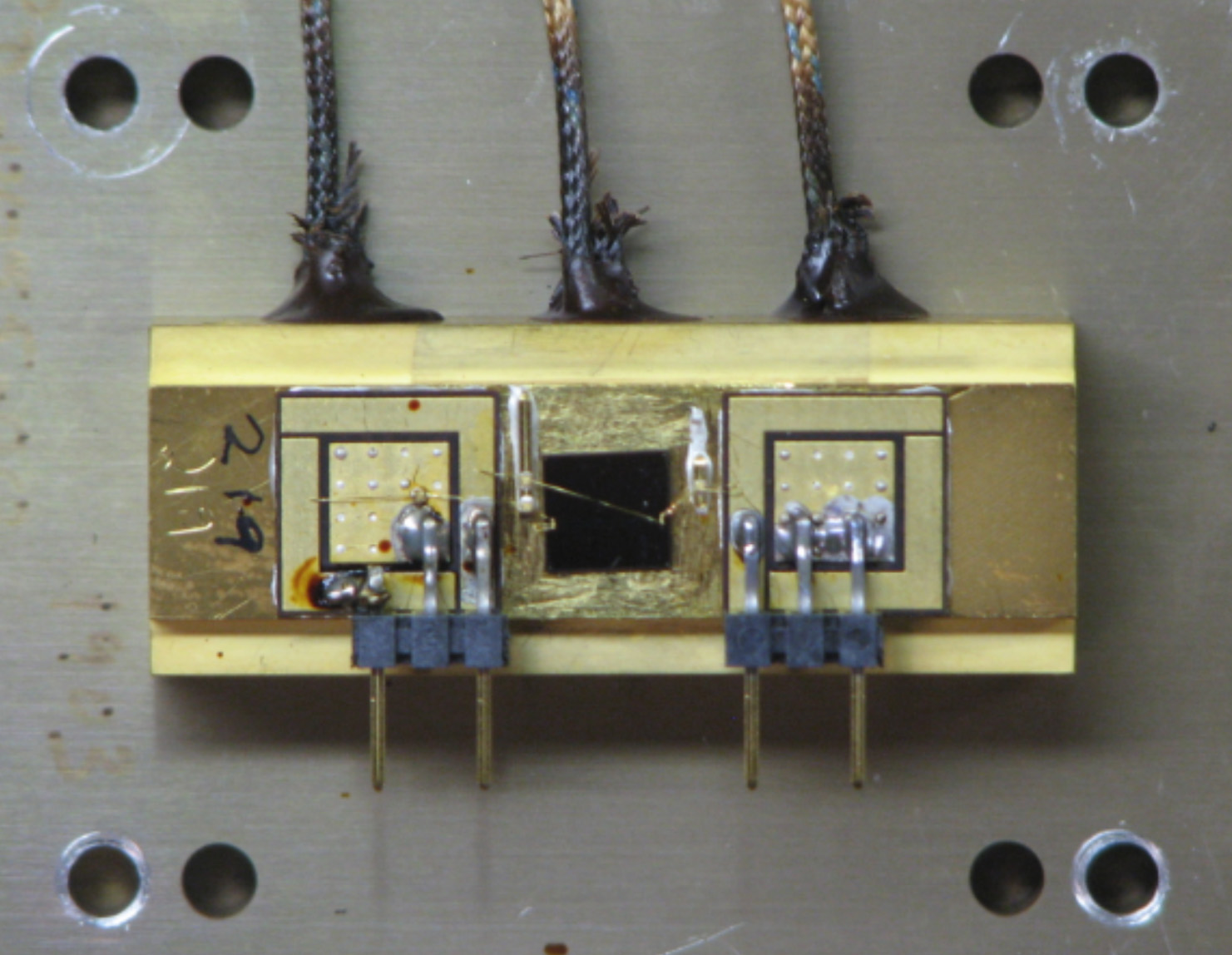 This image shows testing of a polythiophene nanofiber array grown on a copper heat sink and dried in contact with a silicon carbide RF device simulator. (Credit: Daniel P. Resler)