As Strong as its Weakest Link: Experiments Determine Real-world Limits of Graphene

Researchers have measured the fracture toughness of imperfect graphene for the first time and found it to be somewhat brittle. 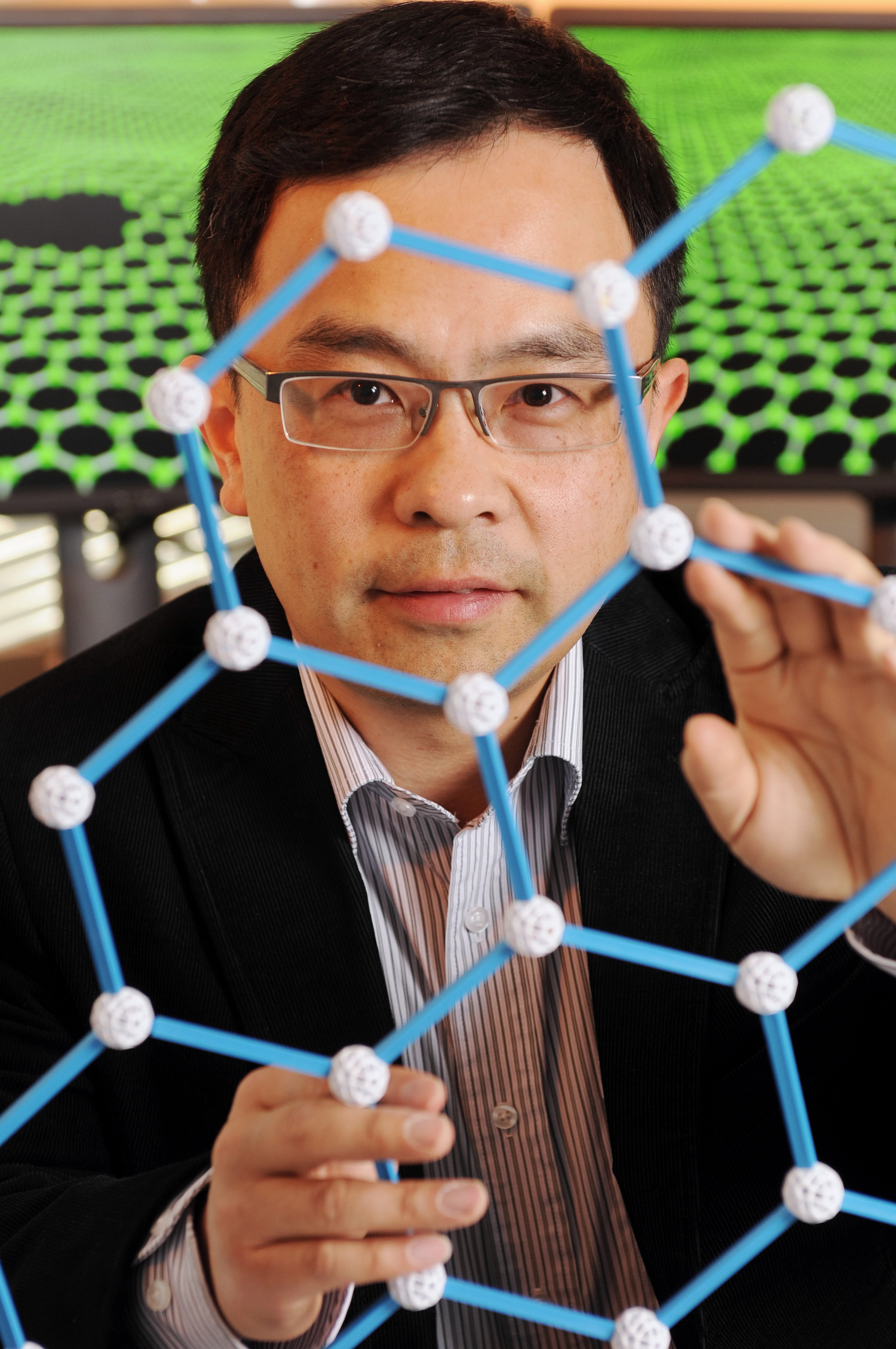 Ting Zhu an associate professor in the George W. Woodruff School of Mechanical Engineering at Georgia Tech, is shown with a model of the graphene structure. Georgia Tech's calculations and physical experiments at Rice University led to the conclusion that graphene, the one-atom layer of carbon, is only as strong as its weakest link. (Georgia Tech Photo: Gary Meek)

There is no disputing graphene is strong. But new research by Rice University and the Georgia Institute of Technology should prompt manufacturers to look a little deeper as they consider the miracle material for applications.

The atom-thin sheet of carbon is touted not just for its electrical properties but also for its physical strength and flexibility. The bonds between carbon atoms are well known as the strongest in nature, so a perfect sheet of graphene should withstand just about anything. Reinforcing composite materials is among the material’s potential applications.

But materials scientists know perfection is hard to achieve. Researchers Jun Lou at Rice and Ting Zhu at Georgia Tech have measured the fracture toughness of imperfect graphene for the first time and found it to be somewhat brittle. While it's still very useful, graphene is really only as strong as its weakest link, which they determined to be "substantially lower" than the intrinsic strength of graphene.

“Graphene has exceptional physical properties, but to use it in real applications, we have to understand the useful strength of large-area graphene, which is controlled by the fracture toughness,” said Zhu, who is an associate professor in the Woodruff School of Mechanical Engineering at Georgia Tech.

The researchers reported in the journal Nature Communications the results of tests in which they physically pulled graphene apart to see how much force it would take. Specifically, they wanted to see if graphene follows the century-old Griffith theory that quantifies the useful strength of brittle materials.

It does, said Lou. "Remarkably, in this case, thermodynamic energy still rules," he said.

Imperfections in graphene drastically lessen its strength – with an upper limit of about 100 gigapascals (GPa) for perfect graphene previously measured by nanoindentation – according to physical testing at Rice and molecular dynamics simulations at Georgia Tech. That's important for engineers to understand as they think about using graphene for flexible electronics, composite material and other applications in which stresses on microscopic flaws could lead to failure.

The Griffith criterion developed by a British engineer during World War I describes the relationship between the size of a crack in a material and the force required to make that crack grow. Ultimately, A.A. Griffith hoped to understand why brittle materials fail.

Graphene, it turns out, is no different from the glass fibers Griffith tested.

"Everybody thinks the carbon-carbon bond is the strongest bond in nature, so the material must be very good," Lou said. "But that's not true anymore, once you have those defects. The larger the sheet, the higher the probability of defects. That's well known in the ceramic community."

A defect can be as small as an atom missing from the hexagonal lattice of graphene. But for a real-world test, the researchers had to make a defect of their own – a pre-crack – they could actually see. "We know there will be pinholes and other defects in graphene," he said. "The pre-crack overshadows those defects to become the weakest spot – so I know exactly where the fracture will happen when we pull it.

"The material resistance to the crack growth – the fracture toughness – is what we're measuring here, and that's a very important engineering property," he said.

Just setting up the experiment required several years of work to overcome technical difficulties, Lou said. To suspend it on a tiny cantilever spring stage similar to an atomic force microscopy (AFM) probe, a graphene sheet had to be clean and dry so it would adhere (via van der Waals force) to the stage without compromising the stage movement necessary for the testing. Once mounted, the researchers used a focused ion beam to cut a pre-crack less than 10 percent of the width into the microns-wide section of suspended graphene. Then they pulled the graphene in half, measuring the force required.

While the Rice team was working on the experiment, Zhu and his team performed computer simulations to understand the entire fracture process.

The combination of modeling and experiment provides a level of detail that allowed the researchers to better understand the fracture process – and the tradeoff between toughness and strength in the graphene. What the scientists have learned in the research points out the importance of fabricating high quality graphene sheets without defects – which could set the stage for fracture.

“Understanding the tradeoff between strength and toughness provides important insights for the future utilization of graphene in structural and functional applications,” Zhu added. “This research provides a foundational framework for further study of the mechanical properties of graphene.”

Lou said the techniques they used should work for any two-dimensional material. "It's important to understand how defects will affect the handling, processing and manufacture of these materials," he said. "Our work should open up new directions for testing the mechanical properties of 2-D materials."

Lou is an associate professor of Materials Science and Nanoengineering and of Chemistry at Rice. The Welch Foundation, the National Science Foundation, the U.S. Office of Naval Research and the Korean Institute of Machinery and Materials supported the research. 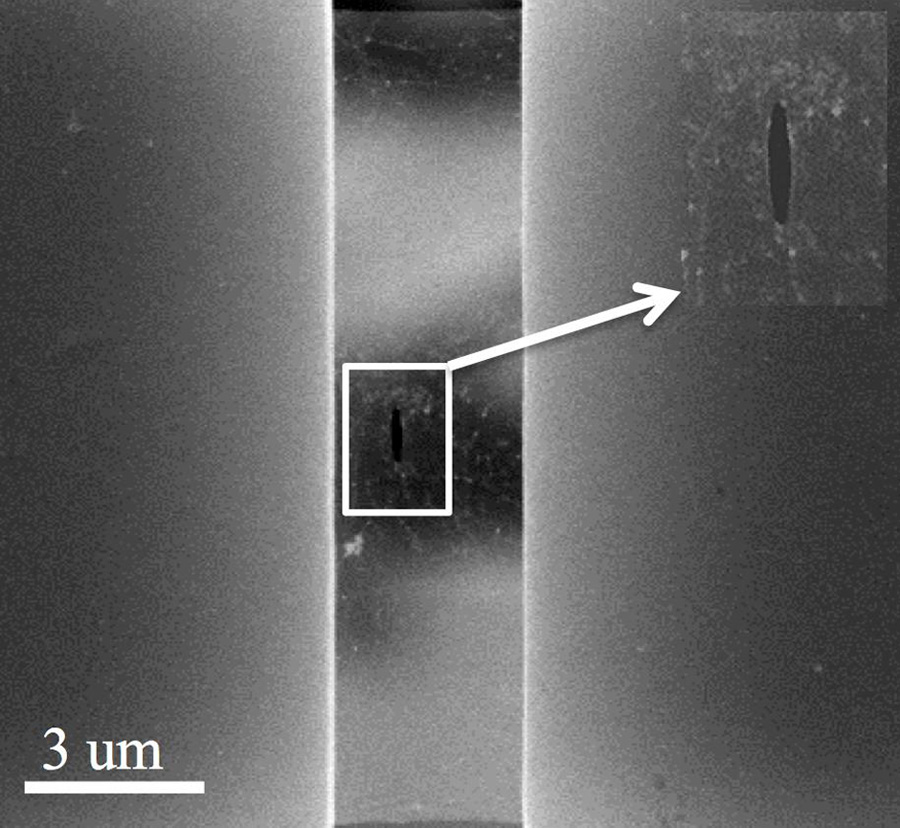 An electron microscope image shows a pre-crack in a suspended sheet of graphene used to measure the overall strength of the sheet in a test at Rice University. Rice and Georgia Tech scientists performed experiments and theoretical calculations and found that graphene, largely touted for its superior physical strength, is only as strong as its weakest point. (Credit: The Nanomaterials, Nanomechanics and Nanodevices Lab/Rice University) 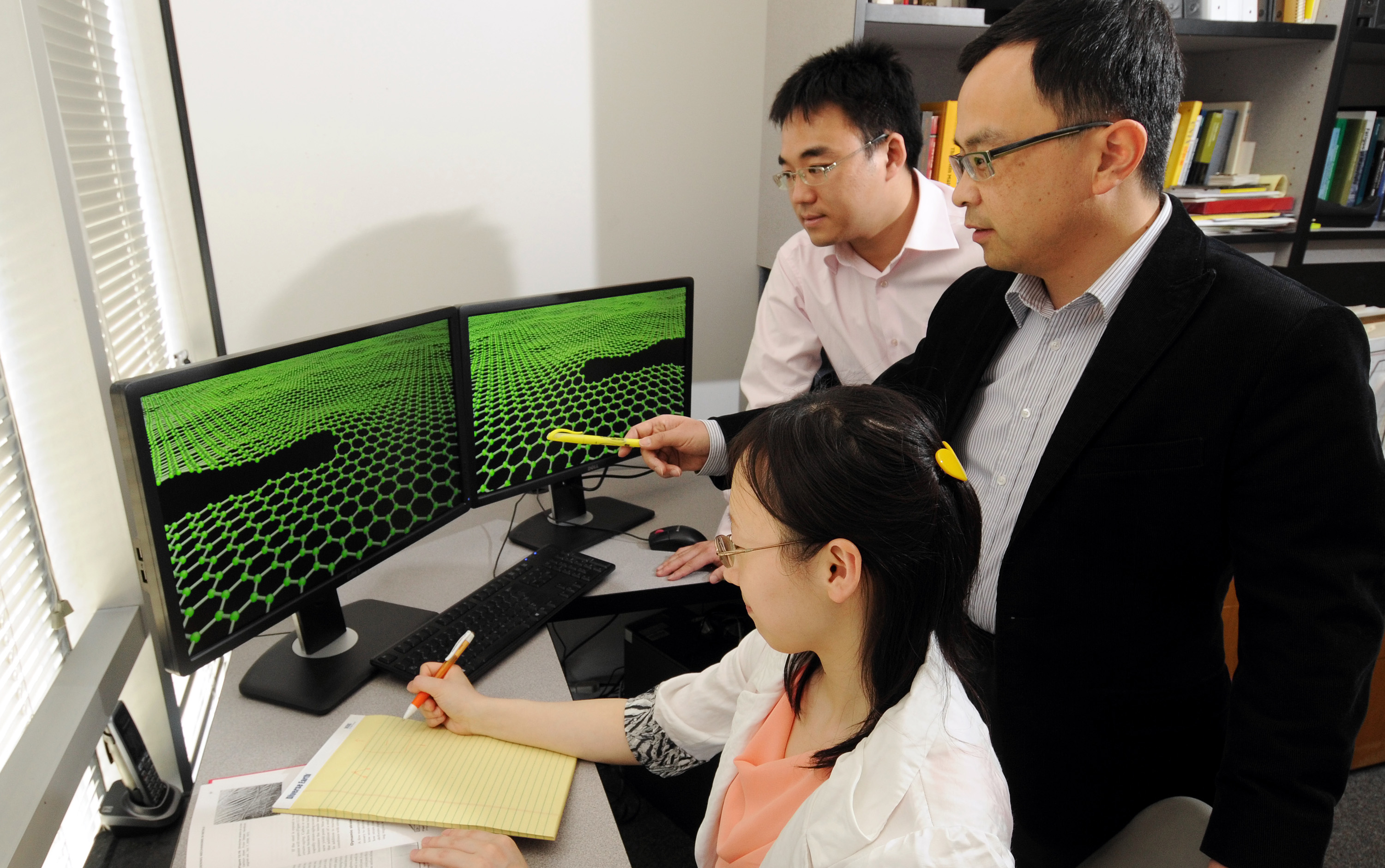 Ting Zhu, right, an associate professor in the George W. Woodruff School of Mechanical Engineering at Georgia Tech, works with graduate students Feifei Fan, seated, and Zhi Zeng to calculate the fracture toughness of graphene that has been pre-cracked. Georgia Tech's calculations and physical experiments at Rice University led to the conclusion that graphene, the one-atom layer of carbon, is only as strong as its weakest link. (Georgia Tech Photo: Gary Meek) 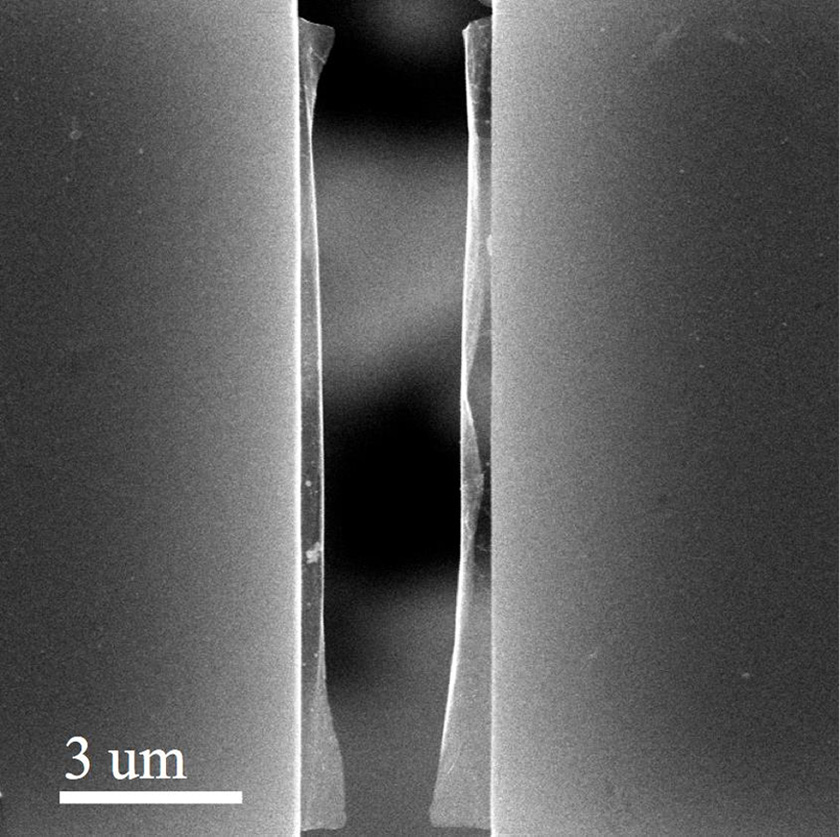 A pre-cracked sheet of graphene was suspended and pulled apart on a spring-loaded stage to measure how much strength a defective piece of graphene shows. Scientists at Rice University and Georgia Tech found graphene is only as strong as its weakest point. Because most graphene has defects, its real strength is likely to be significantly lower than the intrinsic strength of a perfect sheet of the atom-thick carbon material. (Credit: The Nanomaterials, Nanomechanics and Nanodevices Lab/Rice University) 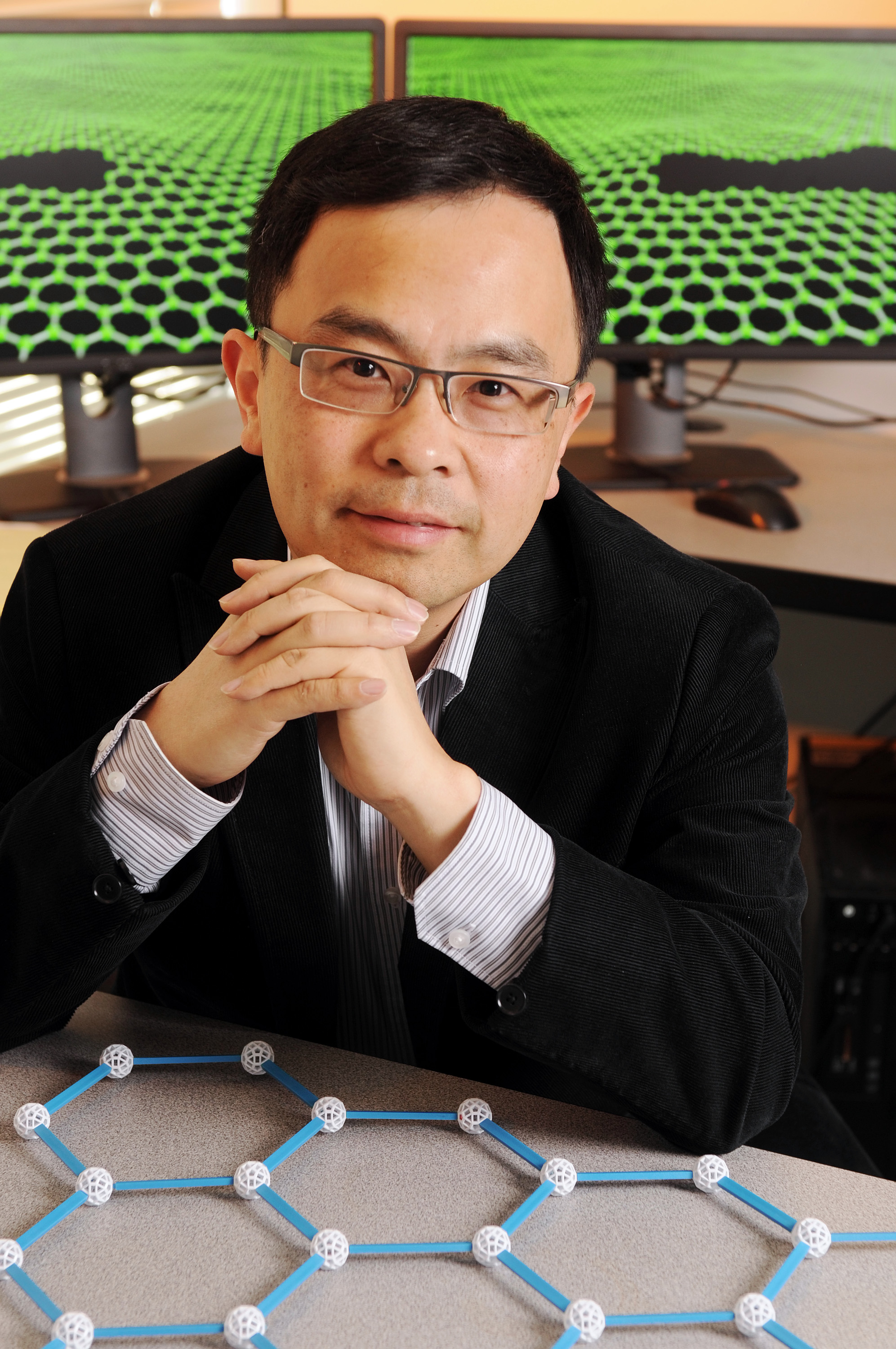 Ting Zhu an associate professor in the George W. Woodruff School of Mechanical Engineering at Georgia Tech, is shown with a model of the graphene structure. Georgia Tech's calculations and physical experiments at Rice University led to the conclusion that graphene, the one-atom layer of carbon, is only as strong as its weakest link. (Georgia Tech Photo: Gary Meek) 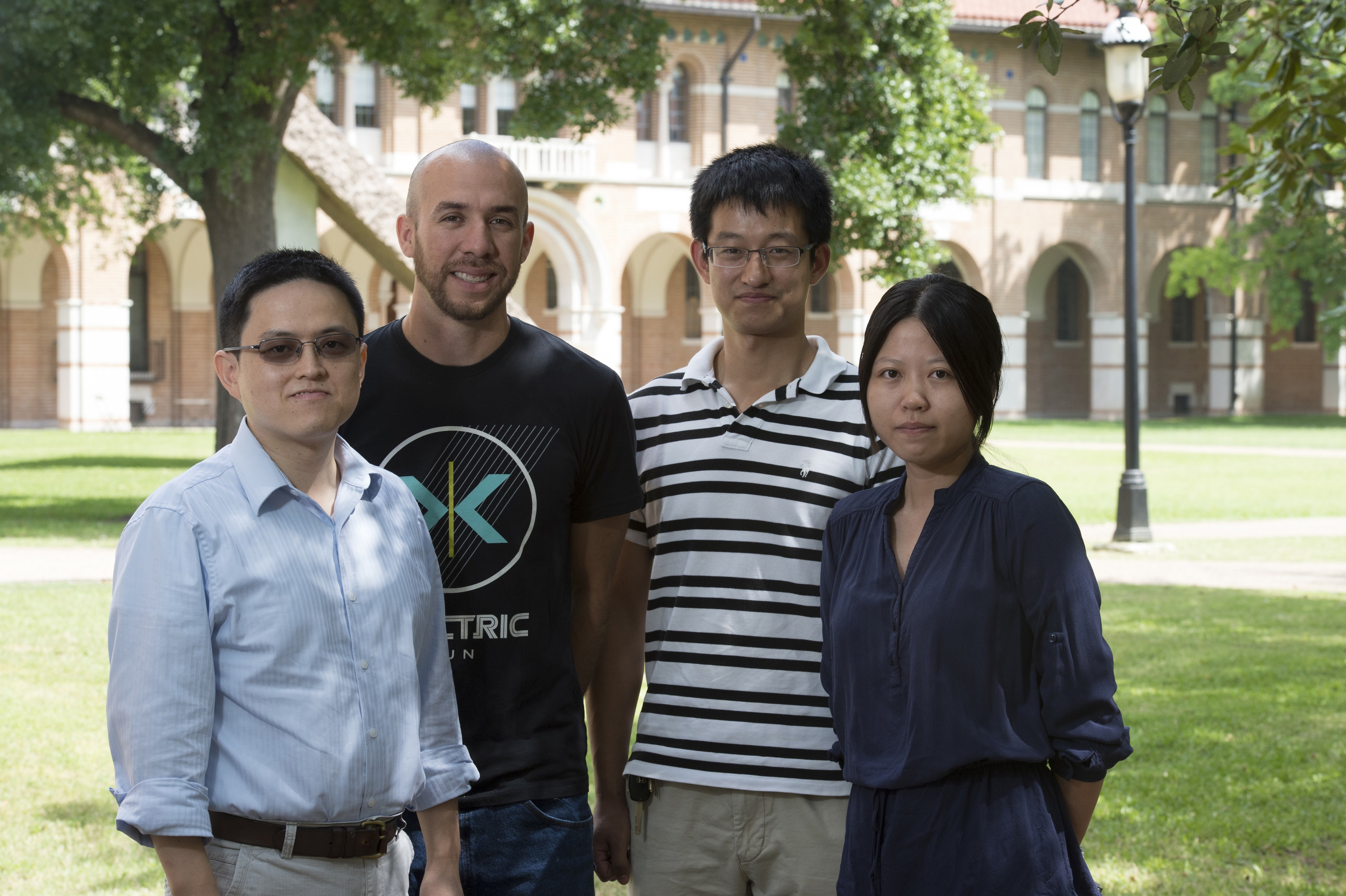 A Rice University team carried out tests on graphene after making "pre-cracks" in the atom-thick material large enough to be seen under an electron microscope. The goal was to test the fracture toughness of imperfect graphene. From left: Rice materials scientist Jun Lou and graduate students Phillip Loya, Yongji Gong and Lulu Ma. (Credit: Jeff Fitlow/Rice University)