Engineering a Better Way to Rebuild Bone Inside the Body

A new technology under development at the Georgia Institute of Technology could one day provide more efficient delivery of the bone regenerating growth factors with greater accuracy and at a lower cost. 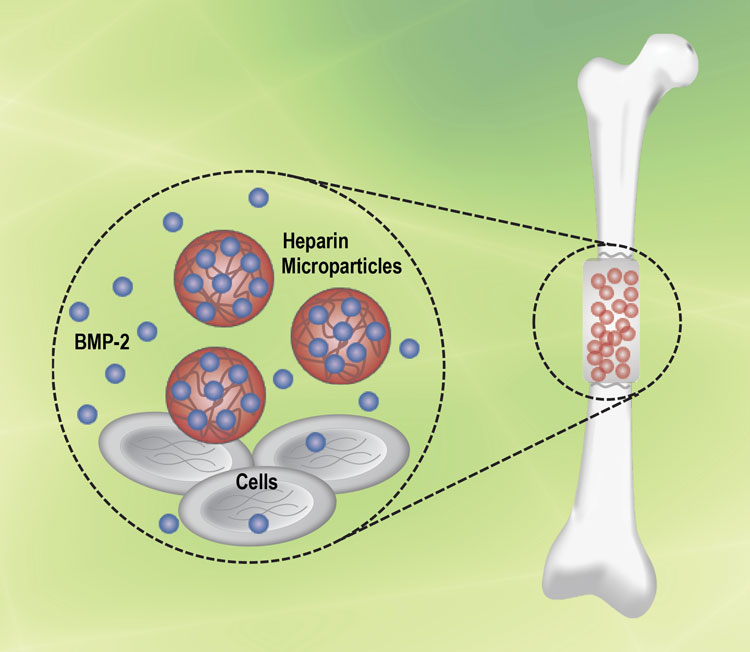 Researchers bound the most clinically-used growth factor, BMP-2, with microparticles of the drug heparin at concentrations up to 1,000-fold higher than previously reported. Credit: Todd McDevitt/Rhys Black.

Traumatic bone injuries such as blast wounds are often so severe that the body can’t effectively repair the damage on its own. To aid the recovery, clinicians inject patients with proteins called growth factors. The treatment is costly, requiring large amounts of expensive growth factors. The growth factors also disperse, creating unwanted bone formation in the area around the injury.

A new technology under development at the Georgia Institute of Technology could one day provide more efficient delivery of the bone regenerating growth factors with greater accuracy and at a lower cost.

In a recent study, researchers bound the most clinically-used growth factor with microparticles of the drug heparin at concentrations up to 1,000-fold higher than previously reported. The growth factor, called bone morphogenetic protein-2 (BMP-2), also remained bioactive after long periods of time spent bound to the microparticles.

The study was sponsored by the National Institutes of Health (NIH) and the National Science Foundation (NSF). The research results were published May 28 in the online edition of the journal Biomaterials. The work was a joint effort of several labs that are part of Georgia Tech’s Petit Institute for Bioengineering and Bioscience. Marian Hettiaratchi, a graduate student in McDevitt's lab, was the paper's lead author.

“This paper is a great example of the type of collaborative interdisciplinary research success that is enabled by three independent research groups working together towards solving a significant problem,” said Robert Guldberg, executive director of the Petit Institute for Bioengineering and Bioscience. “We are very excited about the potential for the heparin microparticle technology to improve the safety and efficacy of recombinant protein delivery for tissue regeneration clinical applications.”

The research team developed a method of fabricating pure heparin microparticles from a modified heparin methacrylamide species that can be thermally cross-linked to growth factors. The technology avoids the bulky materials currently used to deliver growth factors.

Heparin is a widely used anticoagulant with chemical properties that make it ideal for binding to growth factors. The researchers found that heparin microparticles bound BMP-2 with high affinity, exceeding the maximum reported growth factor binding capacity of other heparin-containing biomaterials by greater than 1,000-fold.

Current BMP-2 delivery techniques use a collagen sponge, which releases large amounts of the drug in an initial burst. To compensate for the high initial dose, excess growth factor is loaded into the sponge, leading to non-specific and inefficient delivery of the drug. The new study reported that BMP-2 stayed tightly bound to the heparin microparticles, so it is released slowly over time. After 28 days, just 25 percent of the growth factor had been released from the microparticles.

"The microparticles developed in this work have an extremely high loading capacity for BMP-2, which represents an advantage over current technologies,” said Johnna Temenoff, an associate professor in the Coulter Department. “These microparticles can localize high concentrations of protein therapeutics in an area of tissue damage without introducing large amounts of biomaterial that may take up space and prevent new tissue formation."

BMP-2 also maintained its bioactivity as it was released from microparticles during an in vitro assay. BMP-2-loaded microparticles in physical contact with cell culture also stimulated an increase in the number of cells.

Future work in the project will be to ensure that the growth factor maintains its bioactivity in vivo when bound to the heparin microparticles.

“If we can get a more robust response by actually using less growth factor, then I think we’re on to something that can be a more efficient delivery system,” McDevitt said.

This research is supported by a Transformative Research Award from the National Institutes of Health (NIH), award number (TR01 AR062006), and the National Science Foundation (NSF), under award number DMR 1207045. Any conclusions or opinions are those of the authors and do not necessarily represent the official views of the sponsoring agencies.