Small, but plentiful: how the faintest galaxies illuminated the early universe

The researchers used computer simulations to demonstrate the faintest and smallest galaxies in the early universe were essential.

Light from tiny galaxies over 13 billion years ago played a larger role than previously thought in creating the conditions in the universe as we know it today, a new study has found. Ultraviolet (UV) light from stars in these faint dwarf galaxies helped strip interstellar hydrogen of electrons in a process called reionization.

The epoch of reionization began about 200 million years after the Big Bang and astrophysicists agree that it took about 800 million more for the entire universe to become reionized. It marked the last major phase transition of gas in the universe, and it remains ionized today.

Astrophysicists aren’t in agreement when it comes to determining which type of galaxies played major roles in this epoch. Most have focused on large galaxies. However, a new theory by researchers at the Georgia Institute of Technology and the San Diego Supercomputer Center indicates scientists should also focus on the smallest.  The findings are reported in a paper published today in the journal Monthly Notices of the Royal Astronomical Society.

The researchers used computer simulations to demonstrate the faintest and smallest galaxies in the early universe were essential. These tiny galaxies – despite being 1000 times smaller in mass and 30 times smaller in size than the Milky Way – contributed nearly 30 percent of the UV light during this process.

Reionization experts often ignored these dwarf galaxies because they didn’t think they formed stars. It is assumed that UV light from nearby galaxies was too strong and suppressed these tiny neighbors.

“It turns out they did form stars, usually in one burst, around 500 million years after the Big Bang,” said John Wise, a Georgia Tech assistant professor in the School of Physics who led the study. “The galaxies were small, but so plentiful that they contributed a significant fraction of UV light in the reionization process.”

The team’s simulations modeled the flow of UV stellar light through the gas within galaxies as they formed. They found that the fraction of ionizing photons escaping into intergalactic space was 50 percent in small (more than 10 million solar masses) halos. It was only 5 percent in larger halos (300 million solar masses).  This elevated fraction, combined with their high abundance, is exactly the reason why the faintest galaxies play an integral role during reionization.

“It’s very hard for UV light to escape galaxies because of the dense gas that fills them,” said Wise. “In small galaxies, there’s less gas between stars, making it easier for UV light to escape because it isn’t absorbed as quickly. Plus, supernova explosions can open up channels more easily in these tiny galaxies in which UV light can escape.”

“That such small galaxies could contribute so much to reionization is a real surprise,” said Michael Norman, distinguished professor of physics at UC San Diego and one of the co-authors of the paper. “Once again, the supercomputer is teaching us something new and unexpected; something that will need to be factored into future studies of reionization.”

The term reionized is used because the universe was ionized immediately after the fiery Big Bang. During that time, ordinary matter consisted of hydrogen atoms with positively charged protons stripped of their negatively charged electrons. Eventually, the universe cooled enough for electrons and protons to combine and form neutral hydrogen. They didn’t give off any optical or UV light. Without the light, astrophysicists aren’t able to see traces of how the cosmos evolved during these Dark Ages using conventional telescopes. The light returned when reionization began, allowing experts like Wise to pinpoint the youngest galaxies and study their features.

The research team expects to learn more about these faint galaxies when the next generation of telescopes is operational. For example, NASA’s James Webb Space Telescope, scheduled to launch in 2018, will be able to see them.

This research was supported by the National Science Foundation (NSF) (AST 1211626, AST 1333360 and AST 1109243). Any conclusions expressed are those of the principal investigator and may not necessarily represent the official views of the NSF. 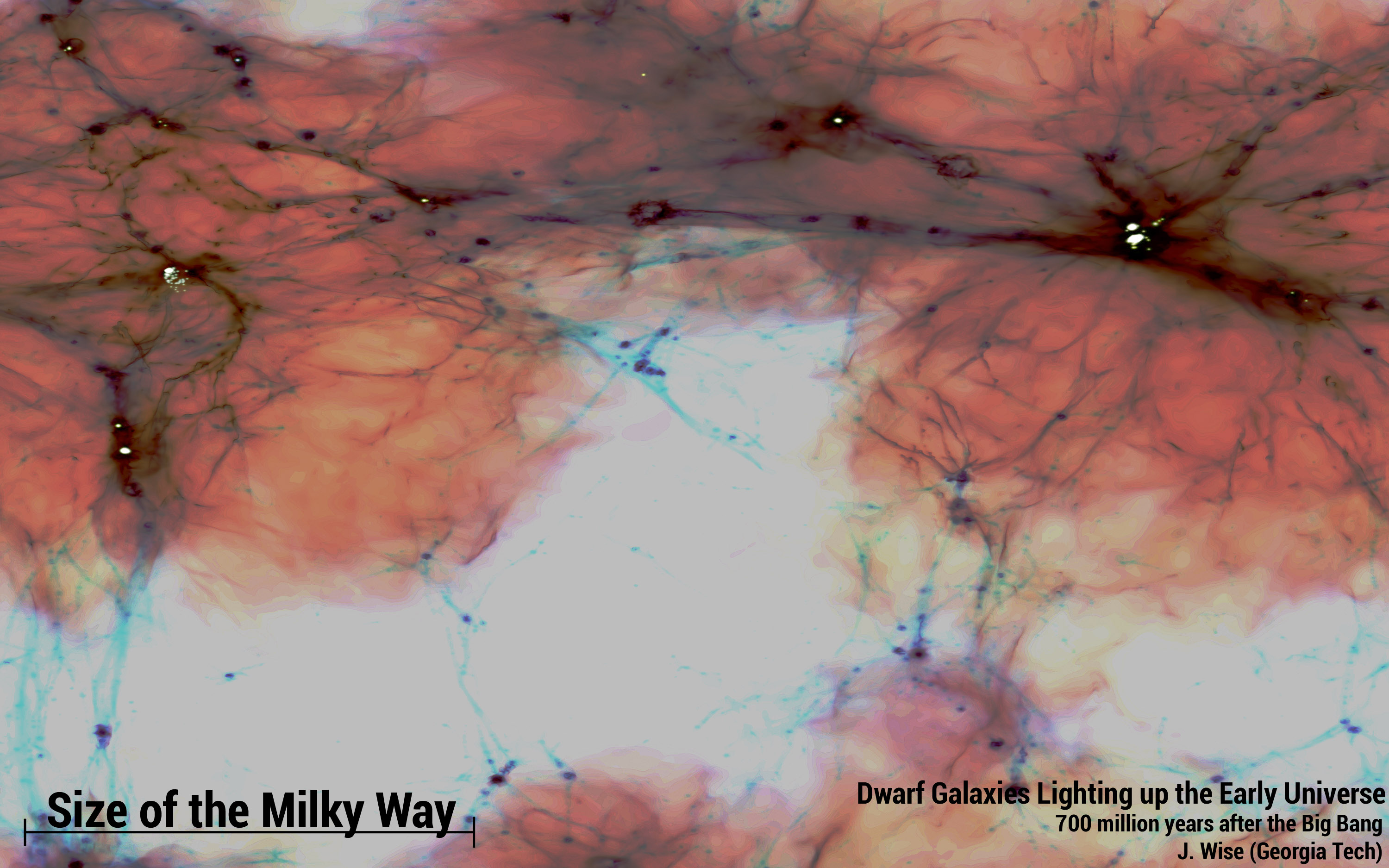 A view of the entire simulation volume that shows the large-scale structure of the gas distribution in filaments and clumps. The red regions are heated by stellar UV light coming from the galaxies, highlighted in white. These galaxies are over 1000 times less massive than the Milky Way and contributed nearly one-third of the UV light during reionization. The field of view of this image is 400,000 light years across when the universe was only 700 million years old. 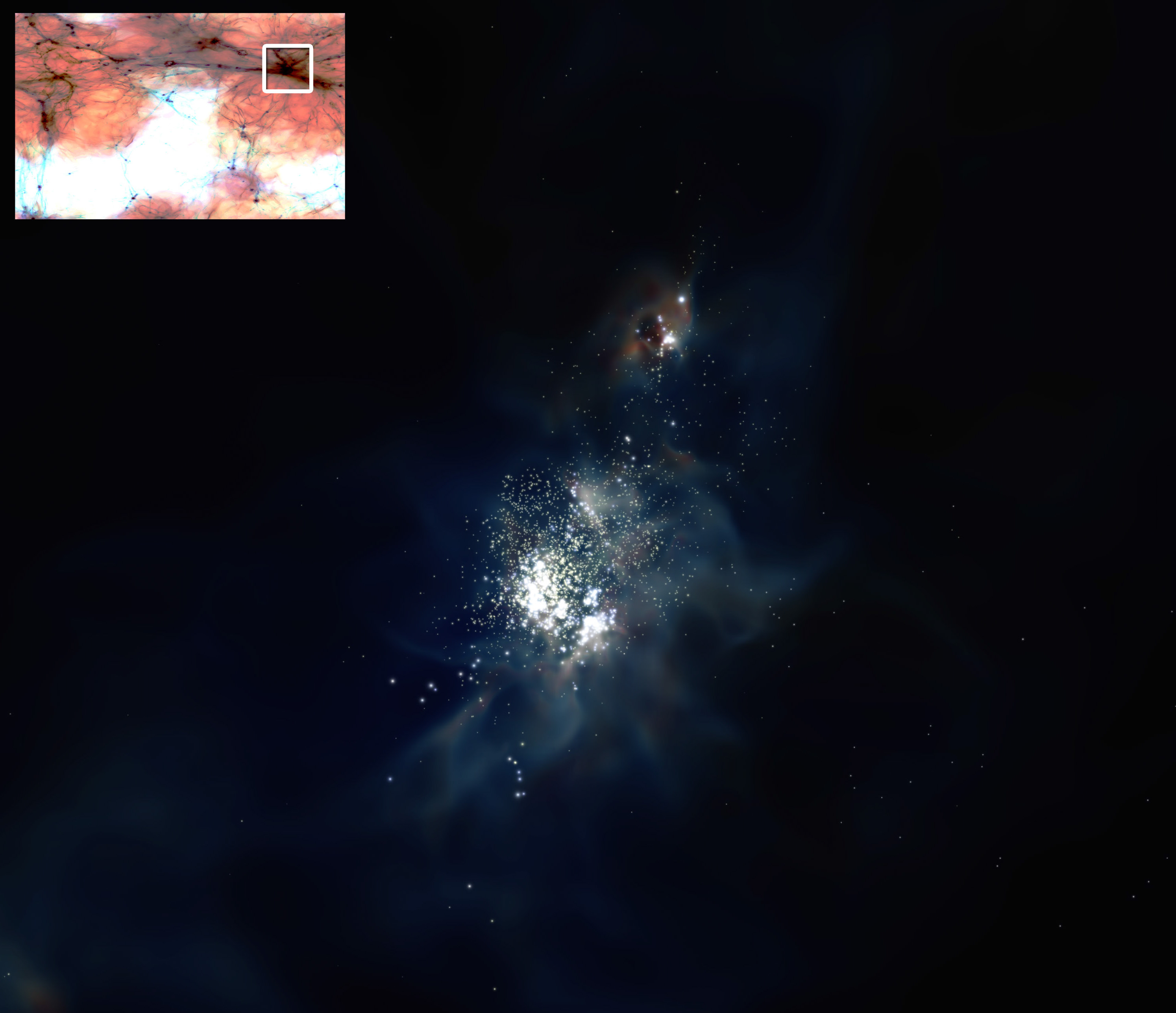 A zoom-in of the most massive dwarf galaxy in the simulation when the universe was only 700 million years old. This galaxy only has 3 million solar masses in stars, compared to 60 billion solar masses in our Milky Way. The yellow points represent the older and cooler stars in the galaxy, and the blue points show the young and massive stars forming just before this snapshot of the simulation. The haze around the stars shows the gas distribution in the galaxy with blue and red representing hot and cold temp