Scientists have shown that RNA from within cells of a common yeast can serve as a template for repairing DNA. 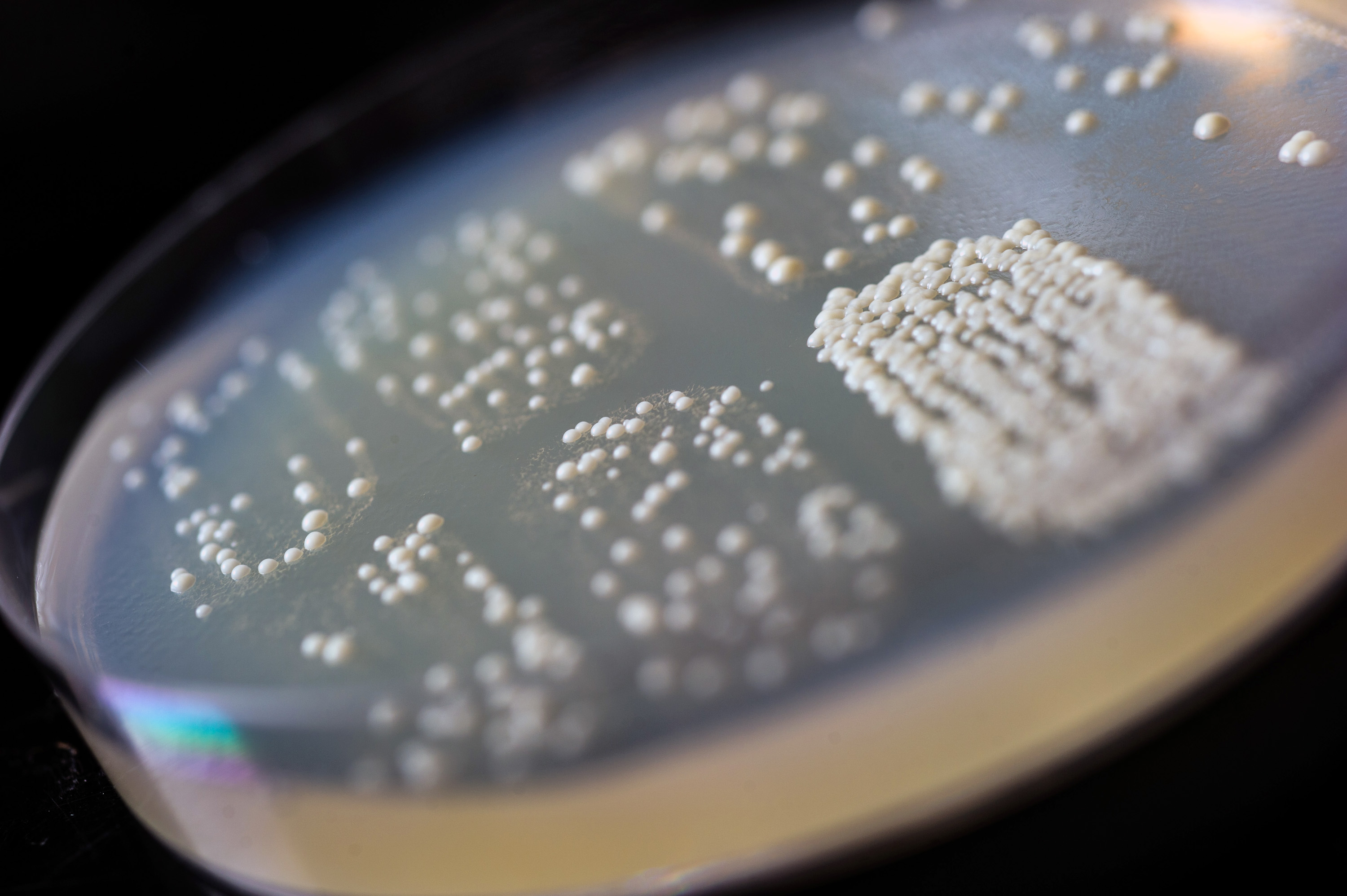 The growth of the budding yeast colonies in the four patches at the bottom of the Petri dish indicates that DNA has been repaired by using transcript RNA from within the cells. (Georgia Tech Photo: Rob Felt)

The ability to accurately repair DNA damaged by spontaneous errors, oxidation or mutagens is crucial to the survival of cells. This repair is normally accomplished by using an identical or homologous intact sequence of DNA, but scientists have now shown that RNA produced within cells of a common budding yeast can serve as a template for repairing the most devastating DNA damage – a break in both strands of a DNA helix.

Earlier research had shown that synthetic RNA oligonucleotides introduced into cells could help repair DNA breaks, but the new study is believed to be the first to show that a cell’s own RNA could be used for DNA recombination and repair. The finding provides a better understanding of how cells maintain genomic stability, and if the phenomenon extends to human cells, could potentially lead to new therapeutic or prevention strategies for genetic-based disease.

The research was supported by the National Science Foundation, the National Institutes of Health and the Georgia Research Alliance. The results were reported September 3, 2014, in the journal Nature.

“We have found that genetic information can flow from RNA to DNA in a homology-driven manner, from cellular RNA to a homologous DNA sequence,” said Francesca Storici, an associate professor in the School of Biology at the Georgia Institute of Technology and senior author of the paper. “This process is moving the genetic information in the opposite direction from which it normally flows. We have shown that when an endogenous RNA molecule can anneal to broken homologous DNA without being removed, the RNA can repair the damaged DNA. This finding reveals the existence of a novel mechanism of genetic recombination.”

Most newly-transcribed RNA is quickly exported from the nucleus to the cytoplasm of cells to perform its many essential roles in gene coding and expression, and in regulation of cell operations. Generally, RNA is kept away from – or removed from – nuclear DNA. In fact, it is known that annealing of RNA with complementary chromosomal DNA is dangerous for cells because it may impair transcription elongation and DNA replication, promoting genome instability.

This new study reveals that under conditions of genotoxic stress, such as a break in DNA, the role of RNA paired with complementary DNA may be different, and beneficial, for a cell. “We discovered a mechanism in which transcript RNA anneals with complementary broken DNA and serves as a template for recombination and DNA repair, and thus has a role in both modifying and stabilizing the genome,” Storici explained.

DNA damage can arise from a variety of causes both inside and outside the cell. Because the DNA consists of two complementary strands, one strand can normally be used to repair damage to the other. However, if the cell sustains breakage in both strands – known as a double-strand break – the repair options are more limited. Simply rejoining the broken ends carries a high risk of unwanted mutations or chromosome rearrangement, which can cause undesirable effects including cancer. Without successful repair, however, the cell may die or be unable to carry out important functions.

Beginning in 2007, Storici’s research team showed that synthetic RNA introduced into cells – including human cells – could repair DNA damage, but the process was inefficient and there were questions about whether the process could occur naturally.

To find out whether cells could use endogenous RNA transcripts to repair DNA damage, she and graduate students Havva Keskin and Ying Shen – who are first and second authors on the paper – devised experiments using the yeast Saccharomyces cerevisiae, which is widely used in the lab for genetics and genome engineering. The researchers developed a strategy for distinguishing repair by endogenous RNA from repair by the normal DNA-based mechanisms in the budding yeast cells, including using mutants that lacked the ability to convert the RNA into a DNA copy. They then induced a DNA double-strand break in the yeast genome and observed whether the organism could survive and grow by repairing the damage using only transcript RNA within the cells.

The researchers measured success by counting the number of yeast colonies growing on a Petri dish, indicating that the repair had been made by endogenous RNA. Testing was done on two types of breaks, one in the DNA from which the RNA transcript had been made, and the other in a homologous sequence from a different location in the DNA.

The research team, which also included scientists from Drexel University, found that proximity of the RNA to the broken DNA increased the efficiency of the repair and that the repair occurred via a homologous recombination process. Storici believes that the repair mechanism may operate in cells beyond yeast, and that many types of RNA can be used.

“We are showing that the flow of genetic information from RNA to DNA is not restricted to retro-elements and telomeres, but occurs with a generic cellular transcript, making it more of a general phenomenon than had been anticipated,” she explained. “Potentially, any RNA in the cell could have this function.”

For the future, Storici hopes to learn more about the mechanism, including what regulates it. She also wants to learn whether it takes place in human cells. If so, that could have implications for treating or preventing diseases that are caused by genetic damage.

“Cells synthesize lots of RNA transcripts during their life spans; therefore, RNA may have an unanticipated impact on genomic stability and plasticity,” said Storici, who is also a Georgia Research Alliance Distinguished Cancer Scientist. “We need to understand in which situations cells would activate RNA-DNA recombination. Better understanding this molecular process could also help us manipulate mechanisms for therapy, allowing us to treat a disease or prevent it altogether.” 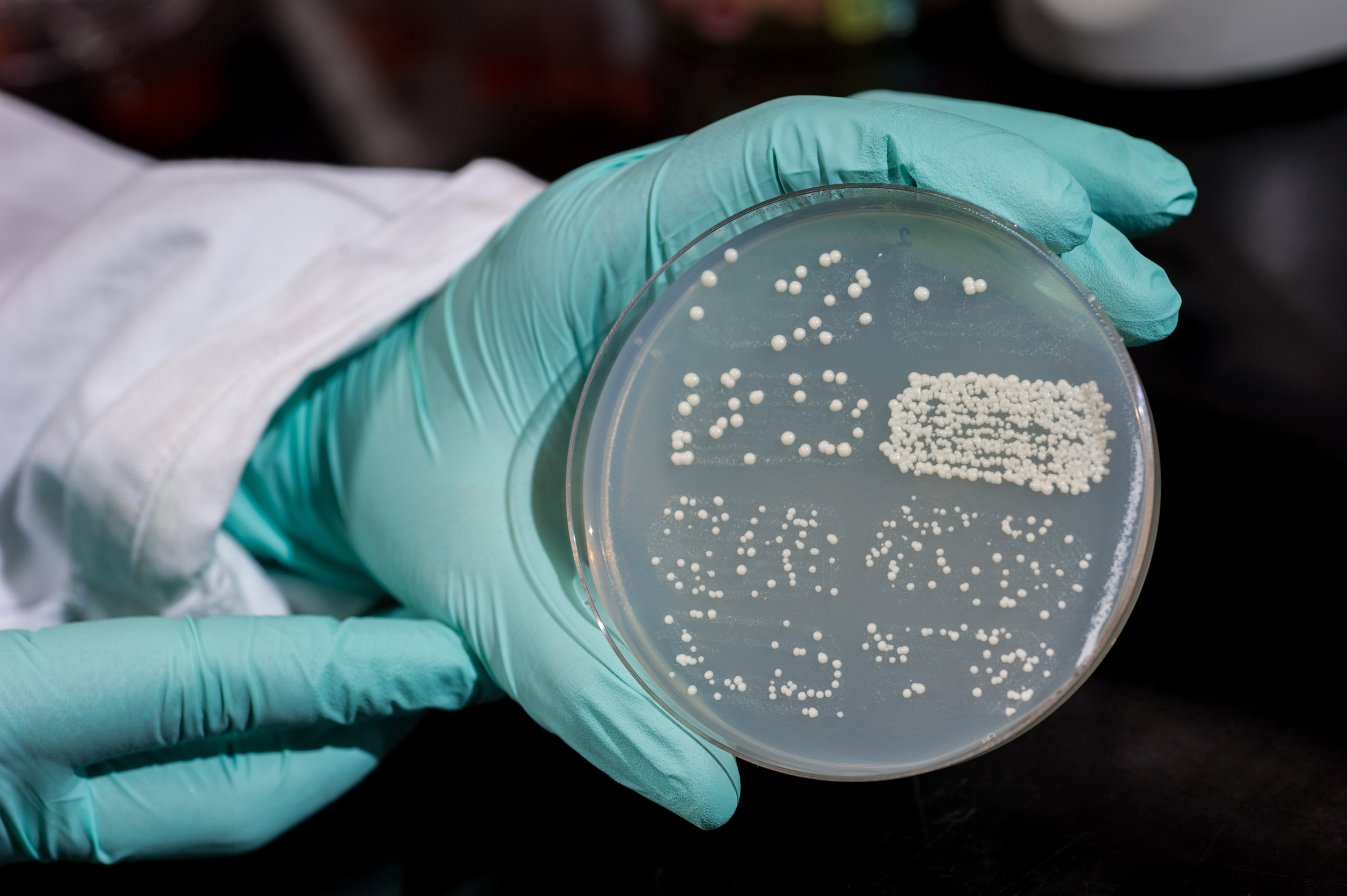 The growth of the budding yeast colonies in the four patches at the bottom of the Petri dish indicates that DNA has been repaired by using transcript RNA from within the cells. (Georgia Tech Photo: Rob Felt) 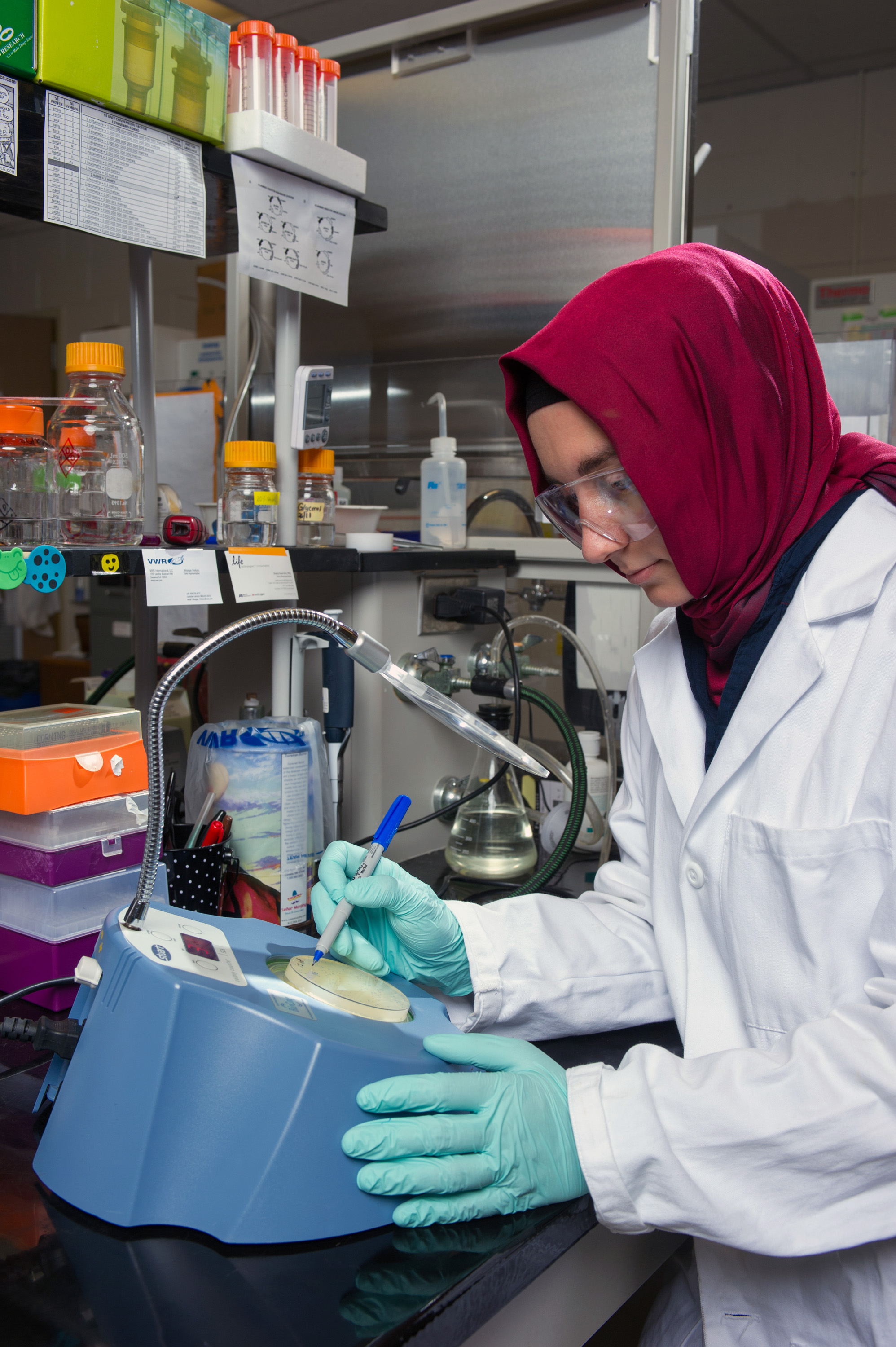 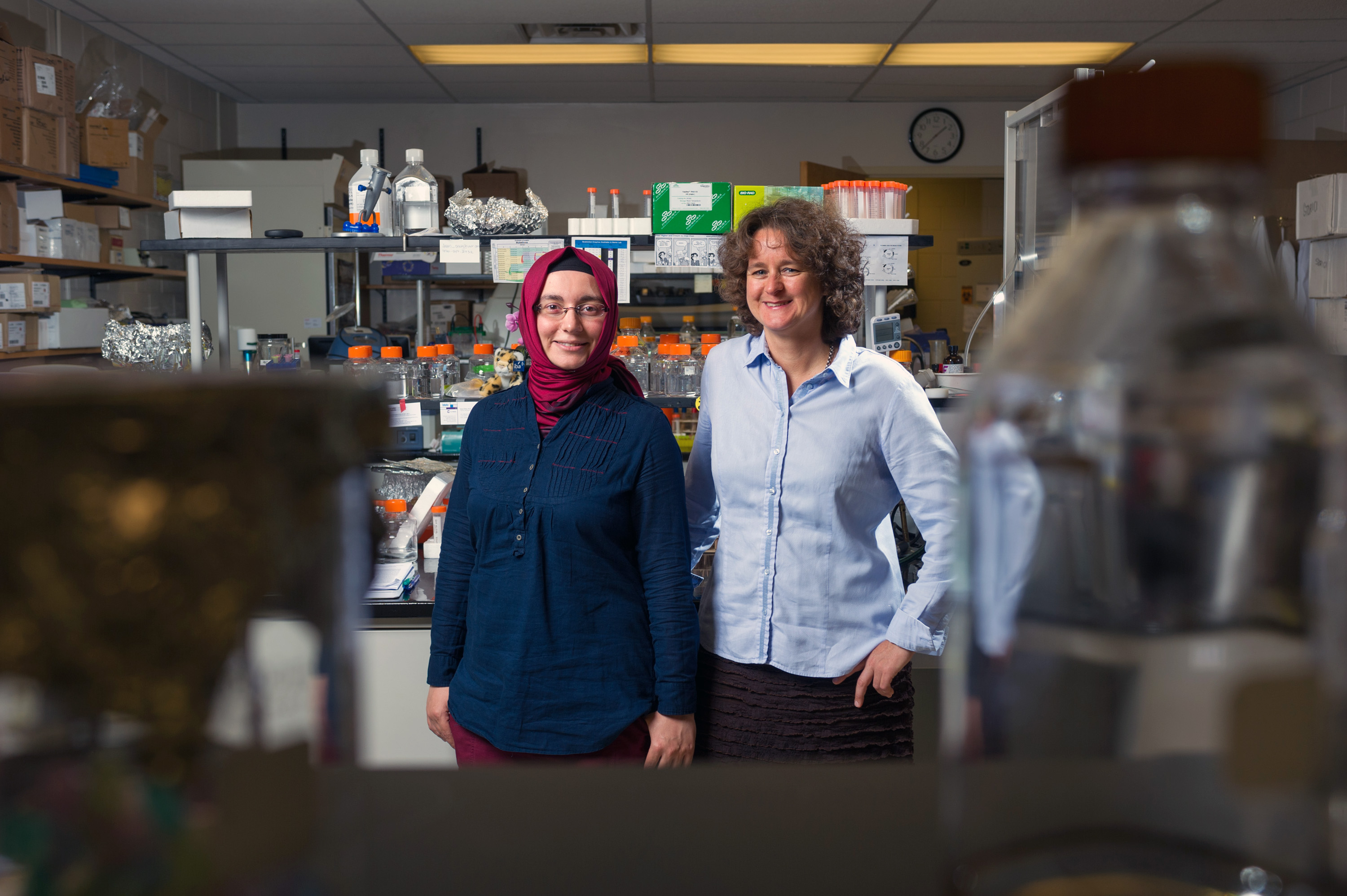