Here’s another reason why it’s a good idea to hit the gym: it can improve memory. A new Georgia Institute of Technology study shows that an intense workout of as little as 20 minutes can enhance episodic memory, also known as long-term memory for previous events, by about 10 percent in healthy young adults.

The Georgia Tech research isn’t the first to find that exercise can improve memory. But the study, which was just published in the journal Acta Psychologica, took a few new approaches. While many existing studies have demonstrated that months of aerobic exercises such as running can improve memory, the current study had participants lift weights just once two days before testing them. The Georgia Tech researchers also had participants study events just before the exercise rather than after workout. They did this because of extensive animal research suggesting that the period after learning (or consolidation) is when the arousal or stress caused by exercise is most likely to benefit memory.

The study began with everyone looking at a series of 90 photos on a computer screen. The images were evenly split between positive (i.e. kids on a waterslide), negative (mutilated bodies) and neutral (clocks) pictures. Participants weren’t asked to try and remember the photos. Everyone then sat at a leg extension resistance exercise machine. Half of them extended and contracted each leg at their personal maximum effort 50 times. The control group simply sat in the chair and allowed the machine and the experimenter to move their legs. Throughout the process, each participant’s blood pressure and heart rate were monitored. Every person also contributed saliva samples so the team could detect levels of neurotransmitter markers linked to stress.

The participants returned to the lab 48 hours later and saw a series of 180 pictures – the 90 originals were mixed in with 90 new photos. The control group recalled about 50 percent of the photos from the first session. Those who exercised remembered about 60 percent.

“Our study indicates that people don’t have to dedicate large amounts of time to give their brain a boost,” said Lisa Weinberg, the Georgia Tech graduate student who led the project.

Although the study used weight exercises, Weinberg notes that resistance activities such as squats or knee bends would likely produce the same results. In other words, exercises that don’t require the person to be in good enough to shape to bike, run or participate in prolonged aerobic exercises.

While all participants remembered the positive and negative images better than the neutral images, this pattern was greatest in the exercise participants, who showed the highest physiological responses. The team expected that result, as existing research on memory indicates that people are more likely to remember emotional experiences especially after acute (short-term) stress.

But why does it work? Existing, non-Georgia Tech human research has linked memory enhancements to acute stress responses, usually from psychological stressors such as public speaking. Other studies have also tied specific hormonal and norepinephrine releases in rodent brains to better memory. Interestingly, the current study found that exercise participants had increased saliva measures of alpha amylase, a marker of central norepinephrine.

“Even without doing expensive fMRI scans, our results give us an idea of what areas of the brain might be supporting these exercise-induced memory benefits,” said Audrey Duarte, an associate professor in the School of Psychology. “The findings are encouraging because they are consistent with rodent literature that pinpoints exactly the parts of the brain that play a role in stress-induced memory benefits caused by exercise.”

The collaborative team of psychology and applied physiology faculty and students plans to expand the study in the future, now that the researchers know resistance exercise can enhance episodic memory in healthy young adults.

“We can now try to determine its applicability to other types of memories and the optimal type and amount of resistance exercise in various populations,” said Minoru Shinohara, an associate professor in the School of Applied Physiology. “This includes older adults and individuals with memory impairment.”

This research was supported in part by PHS Grant UL1 RR025008 from the Clinical and Translational Science Award Program, National Institutes of Health, National Center for Research Resource 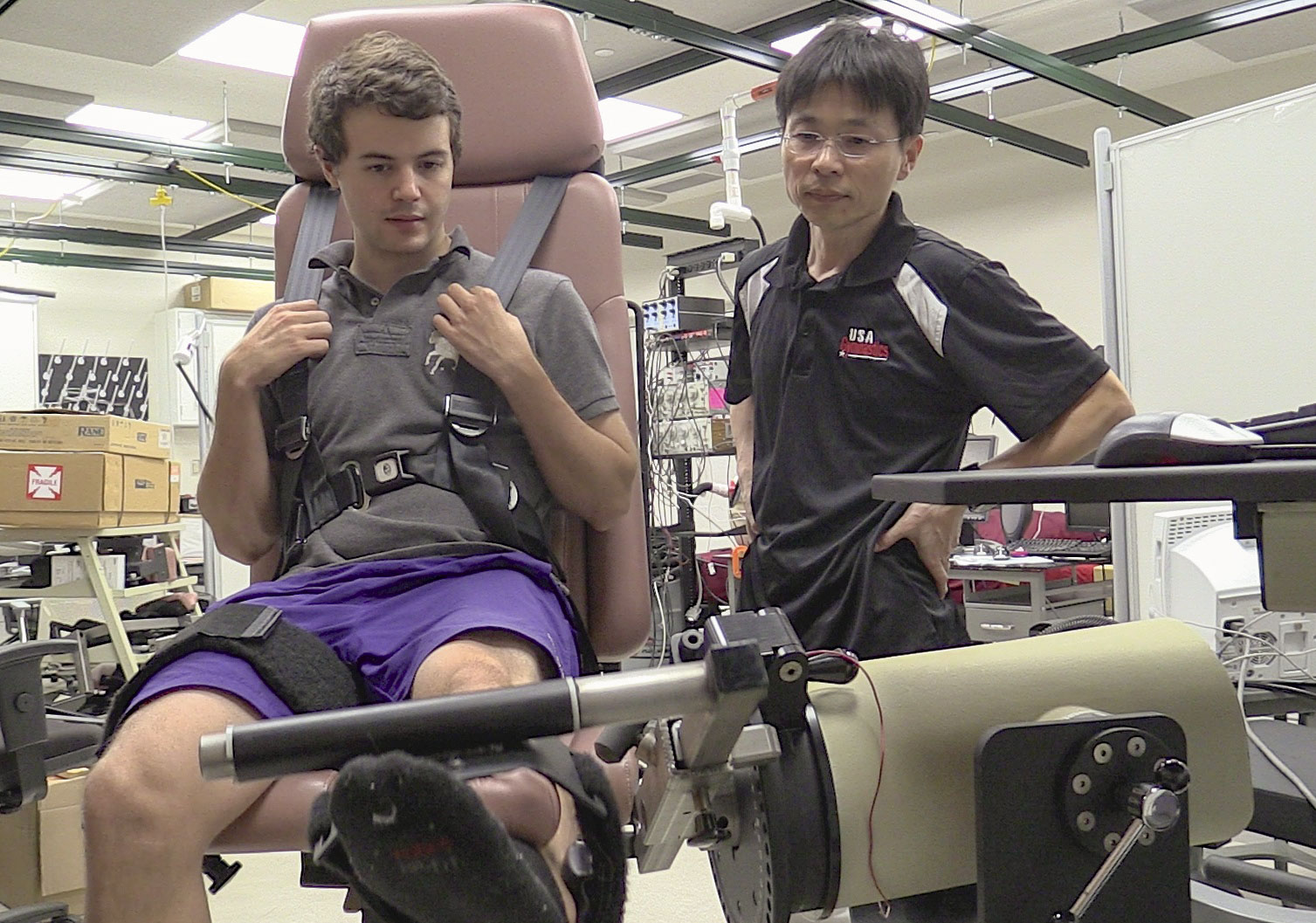 Minoru Shinohara, an associate professor in the School of Applied Physiology and one of the study's researchers, watches a student during a resistance exercise. 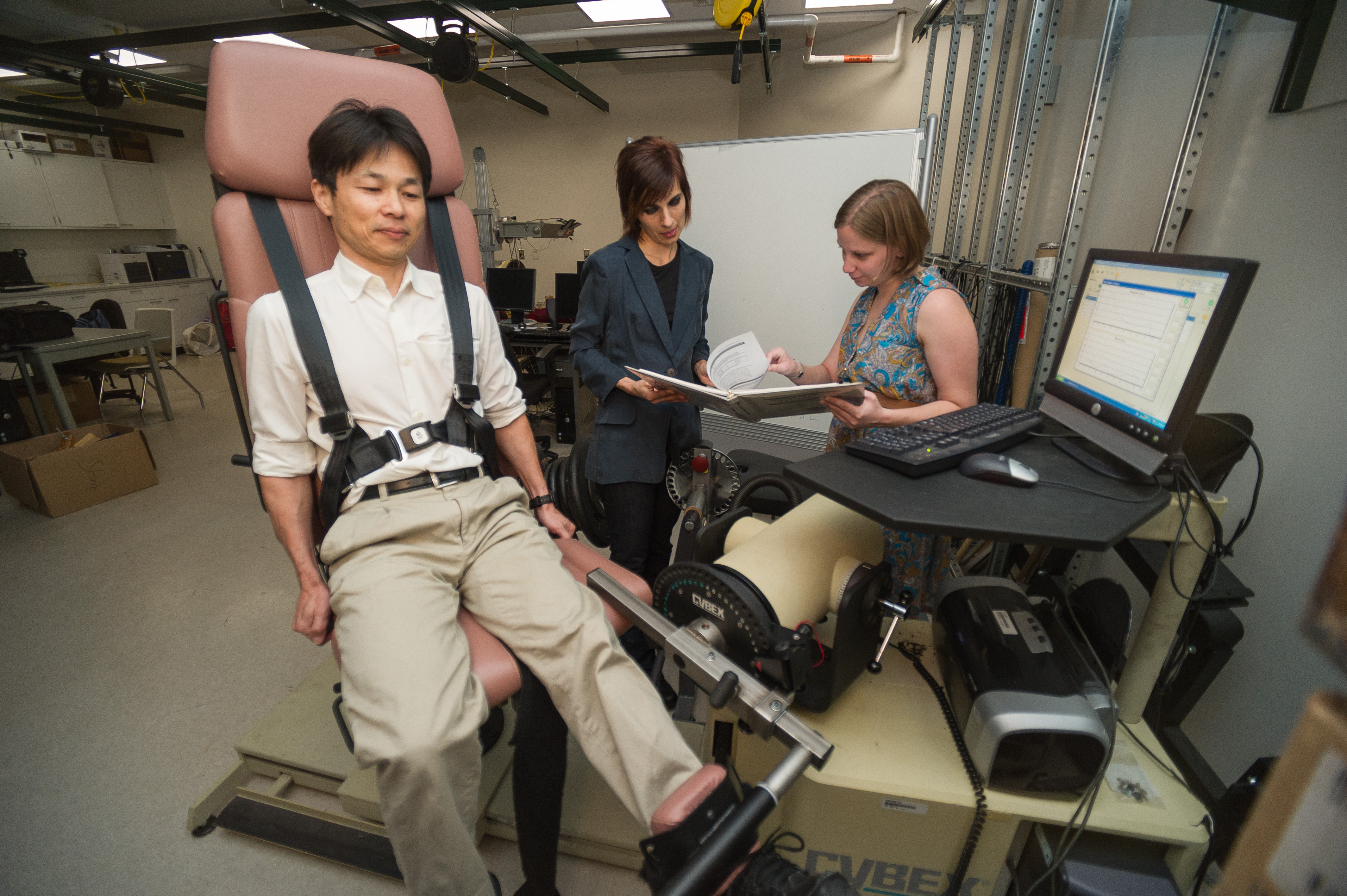