Researchers have studied the impact of the Deepwater Horizon oil spill on communities of beach microbes. 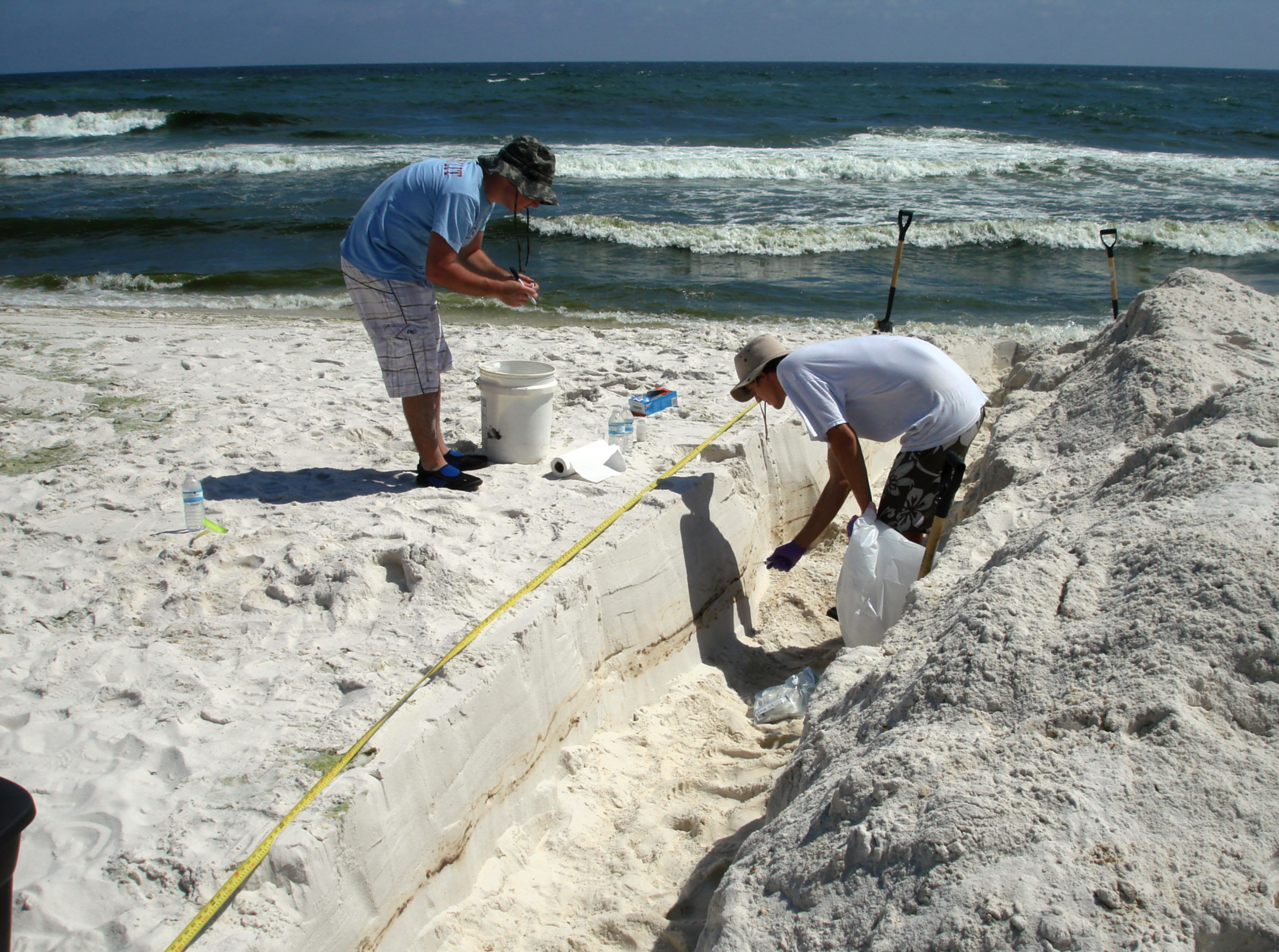 Researchers are shown gathering samples of microbial communities in layers of sand containing oil. They found that the perturbation led to growth of a succession of microbes that broke down portions of the oil over time. (Credit: Markus Huettel)

When oil from the Deepwater Horizon spill first began washing ashore on Pensacola Municipal Beach in June 2010, populations of sensitive microorganisms, including those that capture sunlight or fix nitrogen from the air, began to decline. At the same time, organisms able to digest light components of the oil began to multiply, starting the process of converting the pollutant to carbon dioxide and biomass.

Once the lightest fractions of the oil had been consumed, the organisms that had been digesting those compounds declined, replaced by others able to chew up the remaining heavier materials. Ultimately, a year after the spill, the oil had mostly disappeared and microbial populations buried in the beach sands looked much like they had before the spill, though there were as-yet unexplained differences.

That's the scenario observed by scientists who have studied the oil’s impact on the complex microbial communities – which contain hundreds of single-celled organisms – on this one Gulf Coast beach. Using advanced genomic identification techniques, they saw a succession of organisms and identified population changes in specific organisms that marked the progress of the bioremediation. They also identified the specific genes contained in the oil-eating microbes and the enzymes they used at different stages of the process.

The research, reported online this week in The ISME Journal, could help scientists better understand the microbial succession process that results from such environmental perturbations, and perhaps lay the groundwork for research aimed at accelerating bioremediation. The project represents a collaboration between professors at the Georgia Institute of Technology and Florida State University: Kostas Konstantinidis from the Georgia Tech School of Civil and Environmental Engineering, Joel Kostka from the Georgia Tech School of Biology, and Markus Huettel, professor of Earth, Ocean and Atmospheric Sciences at Florida State.

The research was supported by the National Science Foundation, and by the BP/Gulf of Mexico Research Initiative to the Deep-C Consortium.

“We observed the succession of organisms whose populations rose and fell as the degradation of the oil proceeded,” said Konstantinidis. “We also identified the indicator organisms that show the ecosystem’s response at different stages in the process. Knowing these indicators could help those who must manage these kinds of spills in the future.”

Oil began flowing into the Gulf of Mexico from the Deepwater Horizon rig in mid-April of 2010, but did not reach the Pensacola Municipal Beach until June 22. That allowed time for scientists from Georgia Tech and Florida State University to obtain samples of beach microorganism communities well before the oil began arriving.

Much of the oil reaching the beaches was cleaned up mechanically, though some became buried in the sand. Digging trenches in the beach, Huettel from Florida State took samples at regular intervals for one year after the oil came ashore, and quantified the petroleum hydrocarbon compounds present in the beach sand.

Using advanced meta-genomics technology, which studies the entire community, members of the team from Georgia Tech determined the relative abundances of certain organisms and how they changed over time, providing a clear view of the succession process. As many as ten species of microbes participated at each stage of the bioremediation.

“What is really special about this study is that we provide a robust meta-genomic time series that shows how shifts or changes in microbial populations closely paralleled the chemical evolution of the petroleum hydrocarbons,” said Kostka. Added Konstantinidis: “We have identified which organisms and which genes are important at every stage of the biodegradation process on the beaches.”

Beach communities contain hundreds of different microbes, and as many as 20 percent of them responded to the oil, Konstantinidis said. Those organisms for which the oil was toxic declined dramatically when the oil began reaching the beaches, but had mostly returned a year later.

“When we looked at the microbial communities a year after the spill and compared them to what we saw before the spill, we saw differences, but the communities were very similar to what we saw before the oil arrived,” he said. “You could tell confidently that the system had recovered, but it was not exactly the same community or same state. That’s something we’d like to study further and examine on other beaches.”

Other researchers have evaluated the fate of oil that remained in the Gulf waters.

Konstantinidis said it’s likely the oil washing up on the beaches had significantly different degradation kinetics than the oil that remained in the water columns. Oil containing lighter fractions would be easier to digest by the microbes that normally exist as part of beach communities.

Researchers had expected to see the oil favoring the growth of microbes specific to particular parts of the oil degradation process. While the researchers saw dramatic changes in the communities over time, they saw that “generalist” microbes – those that were the most flexible metabolically – were most successful in expanding their populations.

“These generalist microbes are always around on the beaches or in the water, so you will always have them to break down oil spills,” he said.

In future work, the team would like to study how key ecosystem services like nutrient cycling are directly impacted by microbial community changes from oiling as well as the factors that limit the growth of biodegrading organisms. Important controls for biodegradation include oxygen levels, available nutrients and even competing microbes. If these factors are better understood, the process of digesting oil from spills might be accelerated.

“It took almost a year for the oil to disappear,” Konstantinidis said. “We want to know what are limiting factors for the process that might be addressed. These microbes can take a long time, so if we can figure out how to make the process faster, it would be very helpful.”

This work was supported in part by the National Science Foundation award numbers 1241046, OCE-1057417 and OCE-1044939, an NSF graduate research fellowship to Will Overholt, and by grant SA-12-12, GoMRI-008 from the BP/Gulf of Mexico Research Initiative to the Deep-C Consortium. Any opinions expressed in this article are those of the authors and do not necessarily reflect the official views of the sponsoring organizations. 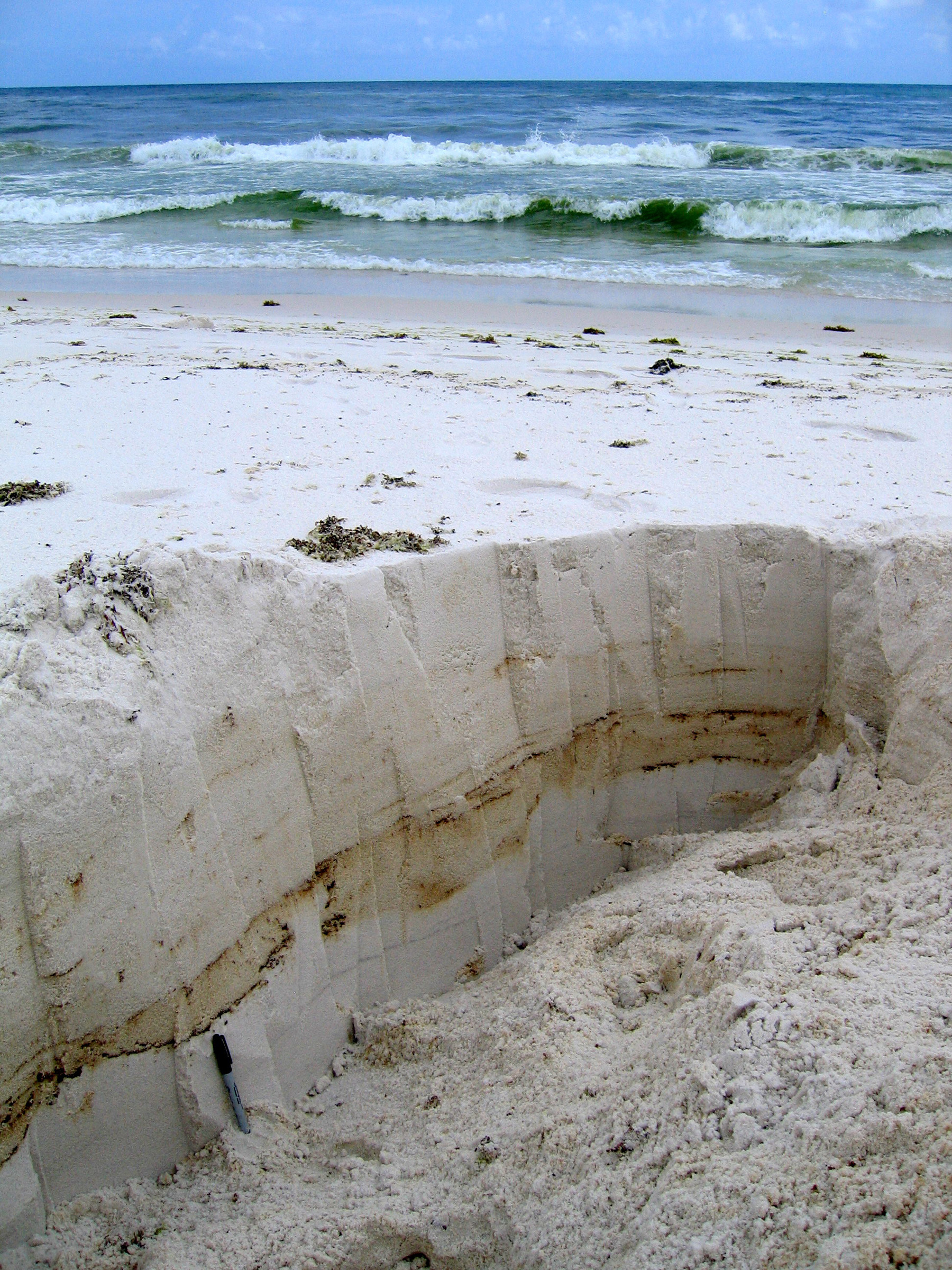 Researchers gathered samples of microbial communities in layers of sand containing oil. They found that the perturbation led to growth of a succession of microbes that broke down portions of the oil over time. (Credit: Markus Huettel)