A new collaboration has led to the development of a non-invasive method to image simian immunodeficiency virus (SIV) replication in real-time, in vivo. 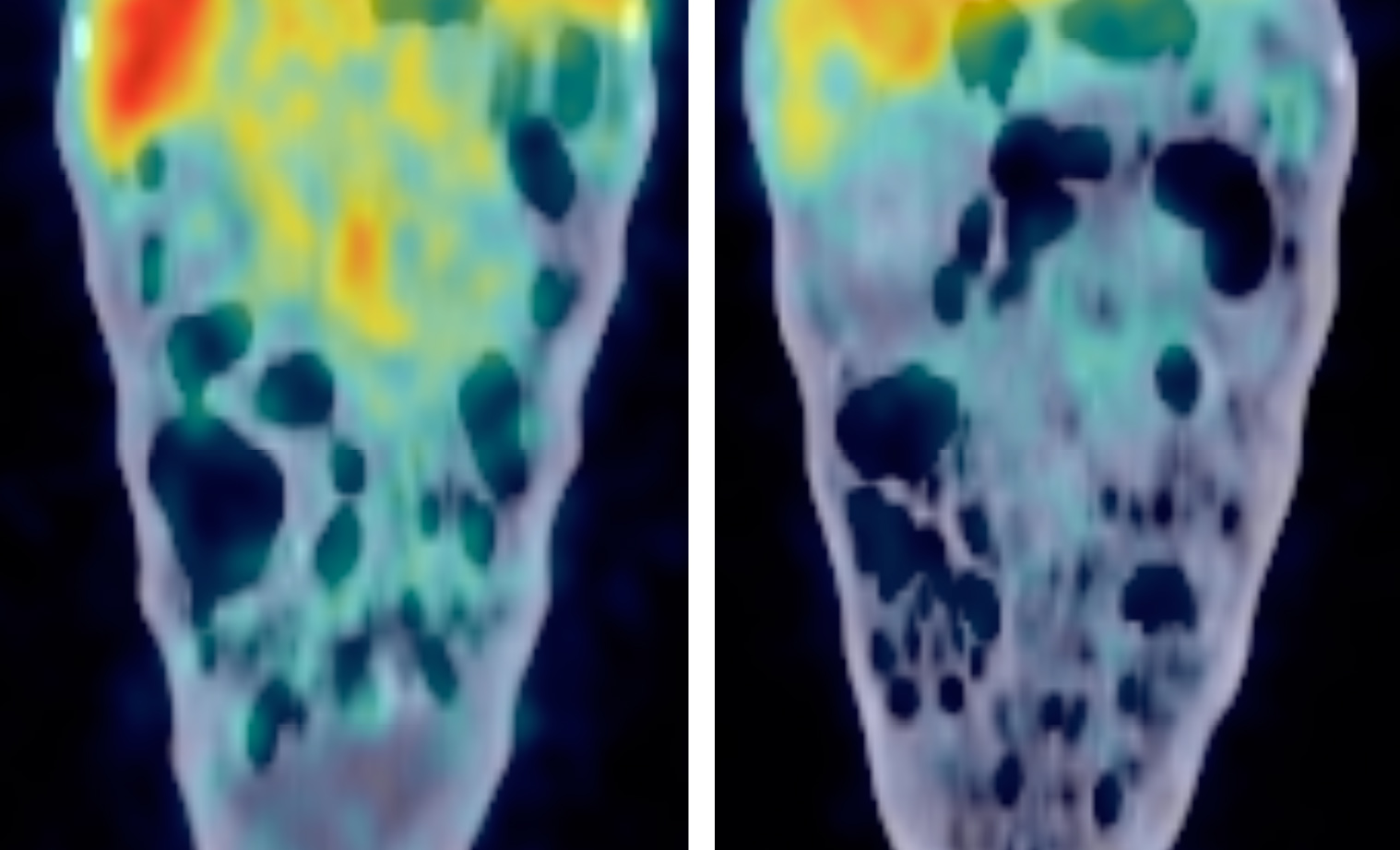 PET/CT images before, while viremic, and during treatment. Virus detection in the gastrointestinal tract decreases under treatment but is not completely eradicated. (Courtesy of Phil Santangelo)

A collaborative effort between investigators at the Yerkes National Primate Research Center, Emory University School of Medicine and Georgia Institute of Technology has led to the development of a non-invasive method to image simian immunodeficiency virus (SIV) replication in real-time, in vivo.

This approach, which is reported March 9 in Nature Methods’ Advance Online Publication, is based on immune positron-emission tomography/computed tomography (PET/CT) and allows for the capture of viral dynamics of SIV, the animal model of human HIV infection. This novel approach has broad application to the study of immunodeficiency virus pathogenesis and drug and vaccine development, as well as to the potential use with human patients to identify viral reservoirs potentially leading to a cure of HIV/AIDS.

Francois Villinger, DVM/PhD, a researcher in the Yerkes Research Center’s Microbiology and Immunology division, and Philip Santangelo, PhD, a researcher at Emory University and in the Wallace H. Coulter Department of Biomedical Engineering at Georgia Institute of Technology, spearheaded the study with their respective teams and collaborators at the Emory School of Medicine. Using the nonhuman primate model of human HIV infection, their approach uncovered novel, previously unappreciated sites of viral replication, such as in nasal tissue and the reproductive organs.

In addition, the methodology was able to capture the previously unappreciated wide variation in viral replication levels within select organs, including sections of the gastrointestinal tract, whether or not the subject was taking antiretroviral therapy (ART). Finally, the methodology allows for repeat analysis of the viral dynamics, for example during acute infection, during ART and upon cessation of ART.

“Before we can hope to eliminate reservoirs of infected HIV cells, we must first identify tissue sites that can possibly serve as these viral reservoirs,” said Villinger. “With this new imaging method, we believe we can now do this more effectively in our animal models and that this strategy can translate these non-invasive techniques into investigating the eradication of HIV infection and targeting of virus reservoirs in humans,” he continued.

“Use of the technique could lead to a better understanding of viral dynamics in the body, which could help target new generations of therapeutics and diagnostics,” added Santangelo. “This could help us find the regions where the virus is replicating and allow us to focus molecular diagnostics on the areas that are really important.”

The imaging tools developed in this study could also have potential applications with other pathogens and disease states, helping researchers understand where the infectious agents reside and how they respond to therapy. The researchers are developing new imaging probes for applying the same technology in humans in the near future.

In the fields of microbiology and immunology, infectious diseases, pharmacology and drug discovery, transplantation, neurologic and psychiatric diseases, as well as behavioral, cognitive and developmental neuroscience, Yerkes scientists use innovative experimental models and cutting-edge technologies to explore and test transformative concepts aimed at: preventing and treating viral diseases such as AIDS; designing novel vaccines for infectious diseases such as malaria and tuberculosis; enhancing the potential of organ transplantation and regenerative medicine; discovering new drugs and drug classes through high-throughput screening; defining the basic neurobiology and genetics of social behavior and developing new therapies for disorders such as autism and drug addiction; understanding the biology of neurodegenerative diseases, such as Alzheimer’s and Parkinson’s diseases; and advancing knowledge about the evolutionary links between biology and behavior.