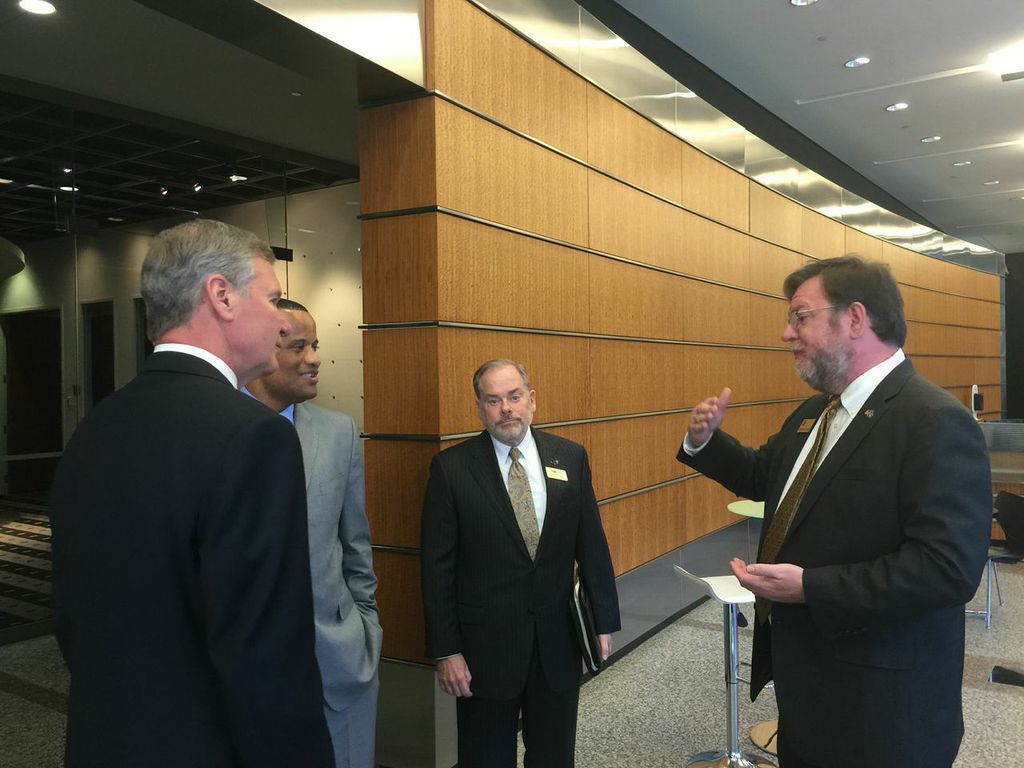 Stephen Fleming (right), vice president of Georgia Tech's Enterprise Innovation Institute, discusses the innovation ecosystem at Tech Square with Jay Williams, (second from left), the assistant secretary of commerce for economic development at the U.S. Department of Commerce. Williams, who was joined by Georgia Tech President G.P. "Bud" Peterson (left) and Steven Cross (center), executive vice president of research at Tech, visited the Institute to make an announcement about a $500,000 i6 Challenge grant th

The U.S. Department of Commerce has awarded the Georgia Institute of Technology a $500,000 i6 Challenge grant to support a sweeping innovation and entrepreneurship initiative in Athens, Augusta, and downtown Atlanta.

The i6 Challenge is a national competition that seeks to fund small, but targeted high-impact initiatives that support startup creation, innovation, and commercialization.

The award, which Georgia Tech is matching with an additional $517,787, will be used to provide education, support, and programs to develop the entrepreneurial community in Georgia in the three communities.

It will be administered through EI2.

Specifically, the award will:

“What’s exciting about this grant is that it really is about partnerships — the cross-community and multi-university partnerships we have in Atlanta, Athens, and Augusta,” EI2 Vice President Stephen Fleming said.

In Augusta, Tech will be working with the Clubhou.se, a technology-oriented, non-profit business and community incubator. In Athens, Tech has partnered with Four Athens, that community’s technology incubator.

In Atlanta, Tech is collaborating with Georgia State and Clark Atlanta universities, Morehouse College, the Morehouse School of Medicine, and Spelman College to develop entrepreneurship programs that support their unique visions.

Lucror Resources, an Atlanta-based developer, is partnering with Tech in the development of an entrepreneurial hub in downtown Atlanta’s Flatiron building that will include the city’s Women’s Entrepreneur Initiative.