A first-of-its-kind robotic vehicle recently dove to depths never before visited under Antarctica’s Ross Ice Shelf and brought back video of life on the seafloor.

Editor's note: Icefin's videos from the seafloor can also be downloaded at the Dropbox link at the bottom of the press release.

A first-of-its-kind robotic vehicle recently dove to depths never before visited under Antarctica’s Ross Ice Shelf and brought back video of life on the seafloor.

A team of scientists and engineers from the Georgia Institute of Technology assembled the unmanned, underwater vehicle on Antarctica. They deployed (and retrieved) the vehicle through a 12-inch diameter hole through 20 meters of ice and another 500 meters of water to the sea floor.

The robotic vehicle, called Icefin, carried a scientific payload capable of measuring ocean conditions under the ice. Icefin’s readings of the environment under Antarctica’s ice shelves, and video of the life that thrives in these harsh conditions, will help understand how Antarctica’s ice shelves are changing under warming conditions, and to understand how organisms thrive in cold and light-free environments. The technologies developed for Icefin will also help in the search for life on other planets, namely Europa, a moon of Jupiter. Antarctica’s icy oceans are remarkably similar to Europa’s ice-capped oceans.

“We built a vehicle that’s a hybrid between the really small probes and the ocean-going vessels, and we can deploy it through bore holes on Antarctica,” said Britney Schmidt, an assistant professor in the School of Earth and Atmospheric Sciences at the Georgia Tech, and the principal investigator for the Icefin project. “At the same time, we’re advancing hypotheses that we need for Europa and understanding ocean systems here better. We’re also developing and getting comfortable with technologies that make polar science -- and eventually Europa science -- more realistic."

Icefin was deployed as a part of the Sub Ice Marine and Planetary–analog Ecosystem (SIMPLE) program, funded by NASA and supported by NSF, with Schmidt as the principal investigator. The research team returned from Antarctica in December 2014. Icefin is planned to make its Arctic debut in summer 2016, with a return to Antarctica that fall, the team hopes (For more images from the mission, visit: http://bit.ly/1P2hBRx).

At McMurdo Station, Schmidt and a team including Georgia Tech scientists and engineers from the Georgia Tech Research Institute (GTRI), led by principal research engineer Mick West, deployed Icefin to explore the underside of the ice shelves flowing off the continent.

“What truly separates Icefin from some of the other vehicles is that it’s fairly slender, yet still has all of the sensors that the scientists like Britney need,” West said. “Our vehicle has instrumentation aboard both for navigation and ocean science that other vehicles do not.”

The Southern Ocean can be as deep as 5,000 meters. Icefin is capable of diving 1,500 meters and can perform three-kilometer-long surveys. Previous vehicles in Icefin’s class were rated to a few hundred meters.

“We saw evidence of a complex community on the sea floor that has never been observed before, and unprecedented detail on the ice-ocean interface that hasn’t been achieved before,” Schmidt said.

“Biologists at McMurdo were just amazed at the amount of biology at that location which included sea stars, sponges and anemones that were at the ocean bottom,” West said. “To have our very first deep-ocean dive happen through a small hole in the ice and go all the way to the ocean bottom and get the video we did was pretty amazing.”

To get to the bottom, Icefin first had to be built. A partnership between research-focused GTRI and academic-focused School of Earth and Atmospheric Sciences (EAS) enabled the team to design, build and deploy Icefin under the ice in less than a year.Traditional design cycles for these types of vehicles typically are two to three years.

The team had to design for a number of challenges associated with deploying Icefin in such an extreme environment. For example, standard electronics systems are not typically rated to the extreme temperatures found under the Ross Ice Shelf.

“We had probably 100 contingencies for if something went wrong,” West said. “Through lots of analysis and robust design, we were fortunate not to have to initiate any of them.”

Once Icefin was assembled, the vehicle was deployed through a bore hole in the ice that was 12 inches in diameter and 20 meters deep. Bore holes are often drilled on Antarctica for ocean moorings and sediment sampling.

Traditional underwater vehicles deployed on Antarctica are either “roving eyes” because they carry only a camera, or much larger vehicles that are deployed in the water on the edge of the ice shelf. Icefin fills the gap between these two kinds of vehicles: able to be deployed easily by small teams in any environment, yet still able to record oceanographic information traditionally done by much larger vehicles.

“Icefin is the most capable small vehicle that’s been down there,” Schmidt said. “What’s really rewarding is that at the same time, we were able to involve some outstanding students in the design, build and deployment of the vehicle.”

Icefin carries forward and up/down imaging and sonars and several different sensors. Icefin is also modular, similar to vehicles used on space missions. Scientists can swap sensors or point them in different directions as needed.

Traditional GPS does not work under the ice, so Icefin uses a navigation system called SLAM (simultaneous localization and mapping) to triangulate its position based on measuring the range and bearing of features on the seafloor or under the ice.

“Using algorithms such as SLAM allows us to construct a map of the unknown under-ice environment. When you can do that, you can begin to get a 3D picture of what’s going on under the water,” West said.

“Those are important processes that we can work out here in our backyard at the same time as we’re answering how an ice shell would reflect the ocean chemistry on Europa,” Schmidt said. “The ice shell is built out of the ocean, but how that process works is not well understood.”

Videos from the seafloor: https://www.dropbox.com/sh/qn2j1q9qf3rqdto/AACn5xE17456hQK43XHj0RBRa?dl=0

For more on explorers at Georgia Tech, see the feature story in the spring issue of Research Horizons magazine: http://www.rh.gatech.edu/features/explorers

This research is supported by Georgia Institute of Technology and the School of Earth and Atmospheric sciences through Schmidt’s startup funds, and partnership with GTRI. Icefin deployed to Antarctica with SIMPLE funded by NASA through grant NNX12AL65G. Deployment was supported by the National Science Foundation (NSF) under project B259. Any conclusions or opinions are those of the authors and do not necessarily represent the official views of the sponsoring agencies. 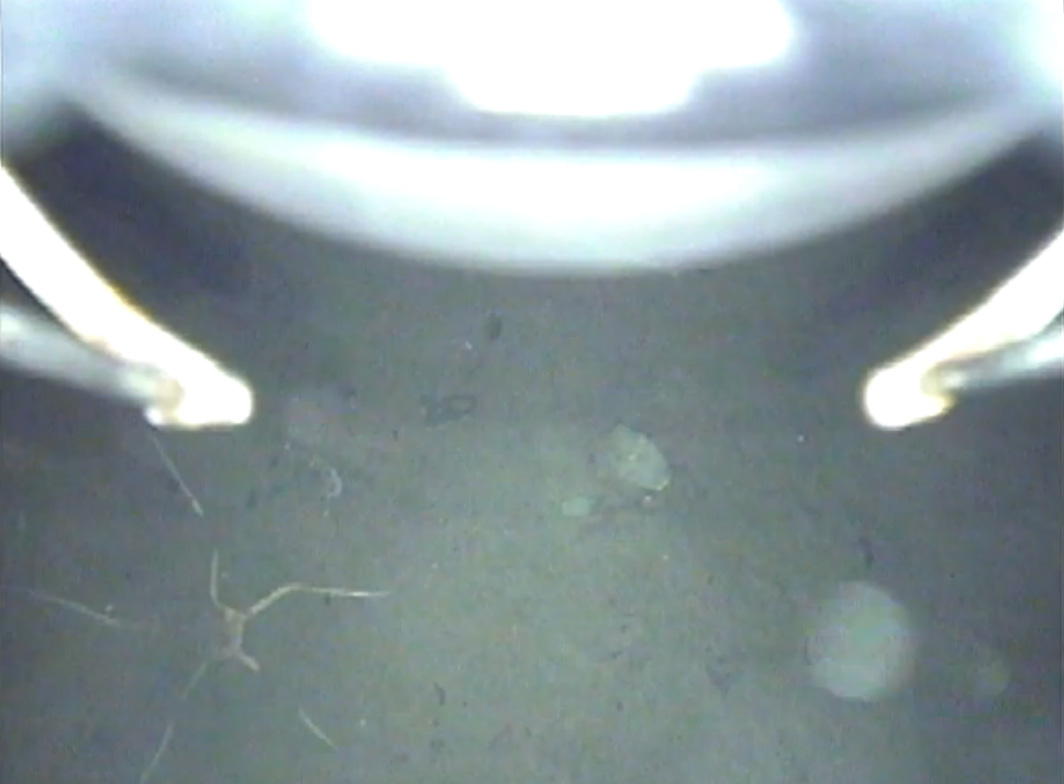 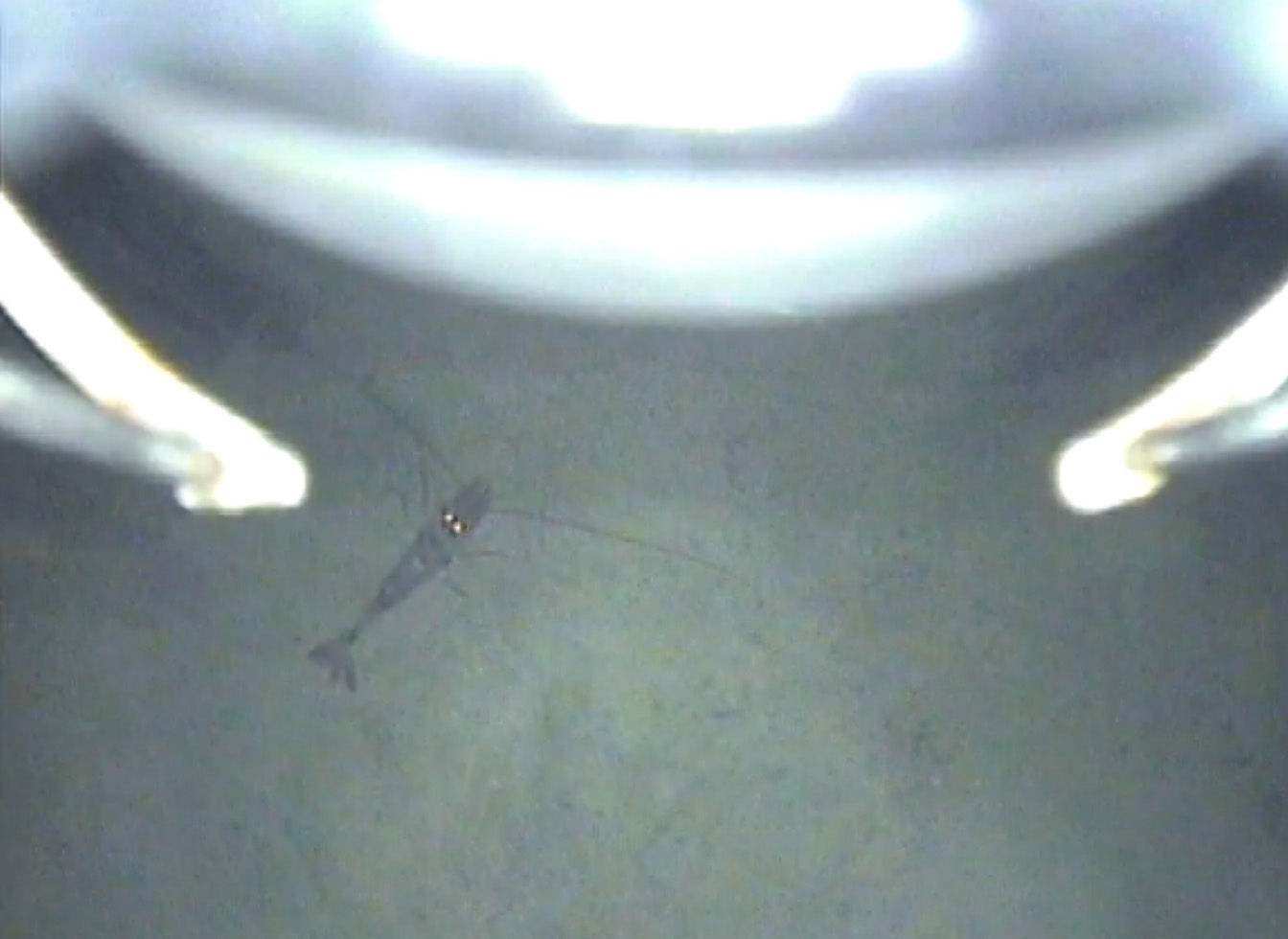 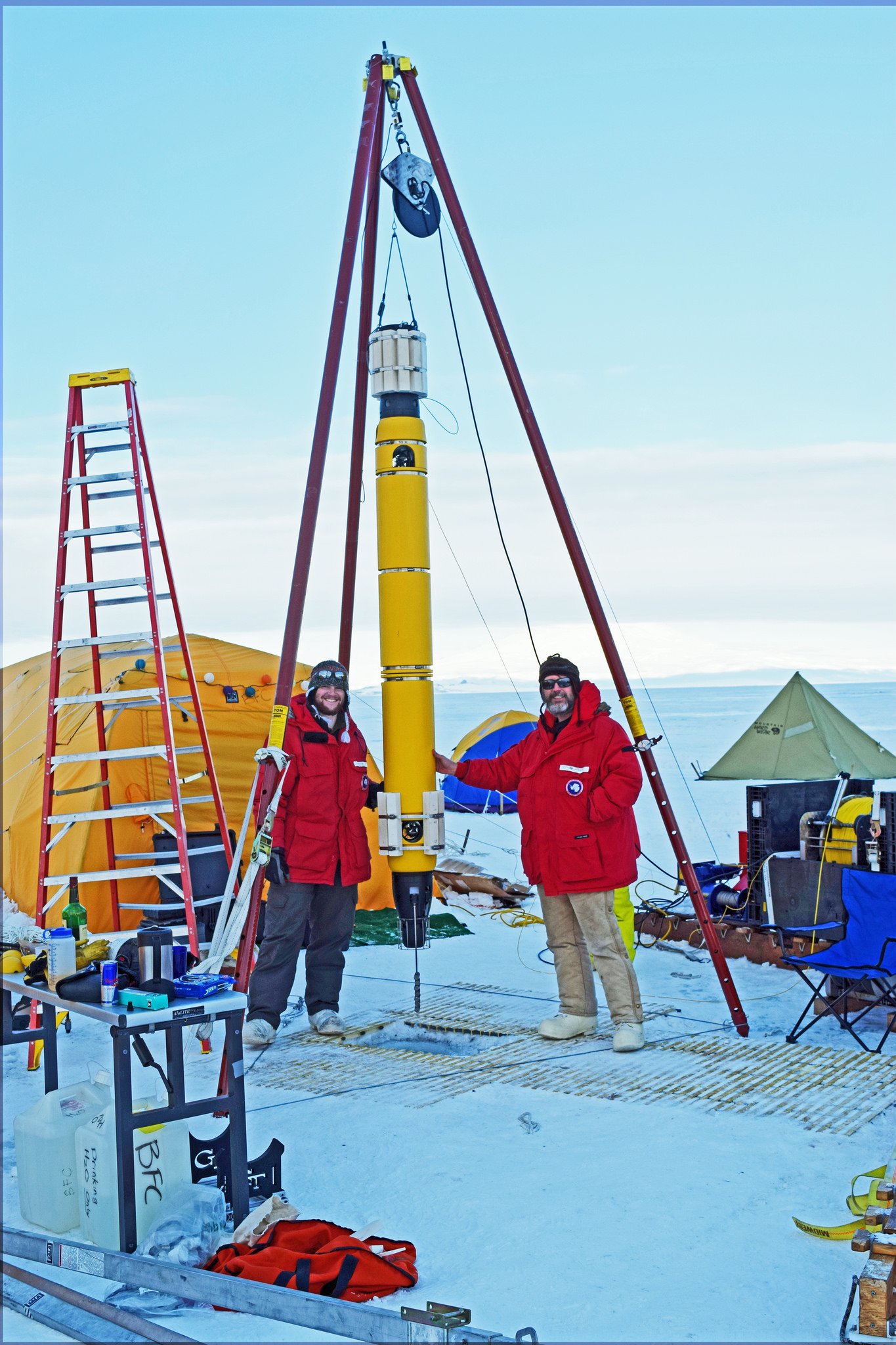 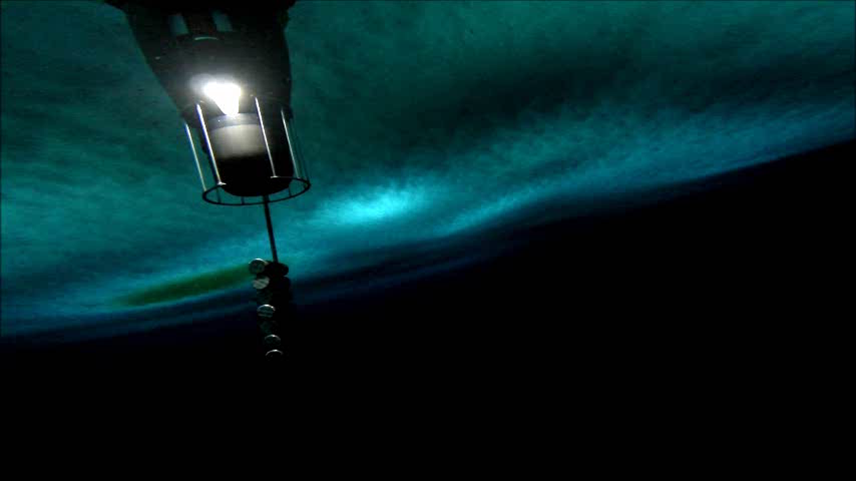 The view under the Ross Ice Shelf, where water meets sea ice, captured by a GoPro camera attached to Icefin. Also visible is a weight that is deployed from Icefin to shift its center of gravity so the vehicle moves from a vertical position to horizontal. Credit: Mick West.