Scientists have determined the three-dimensional structure of a key part of a protein that is associated with glaucoma and identified regions of this domain that correlate with severe forms of the disease. 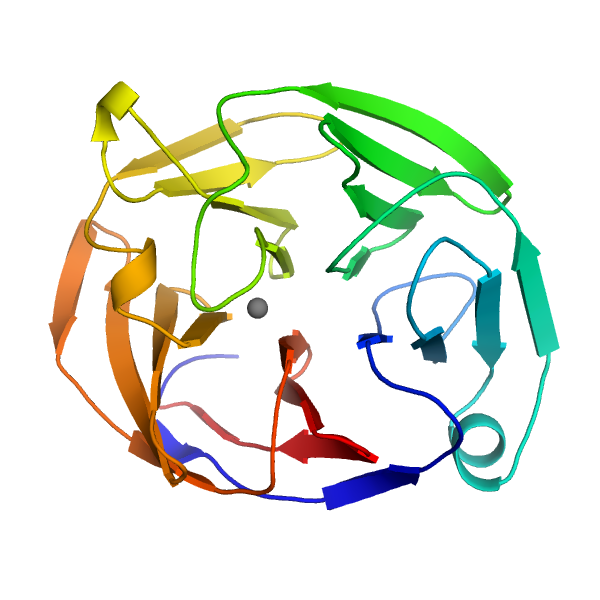 Scientists have determined the three-dimensional structure of a key part of a protein that is associated with glaucoma and identified regions of this domain that correlate with severe forms of the disease.

The new crystal structure is of the olfactomedin (OLF) domain in myocilin, a protein implicated in glaucoma. Many proteins have OLF domains, but mutations in the OLF domain of myocilin are linked to early-onset glaucoma. Despite decades of research, scientists don’t completely understand what biological role myocilin plays nor how these mutations create forms of myocilin that build up in the eye, which causes glaucoma.

“Now that we have the 3D visual picture, we can map the mutations and understand why they can be bad for the protein,” said Raquel Lieberman, an associate professor in the School of Chemistry and Biochemistry at the Georgia Institute of Technology.

The study was sponsored by the American Health Assistance Foundation, the Glaucoma Research Foundation, and the National Institutes of Health (NIH). The study was featured as the cover story in the April 15 issue of the journal Human Molecular Genetics.

Glaucoma, the second leading cause of blindness worldwide, is a group of diseases that damage the eye’s optic nerve and cause vision loss. Elevated eye pressure is the main risk factor for optic nerve damage.

Researchers have implicated mutant forms of myocilin as a root cause of this increased eye pressure. Mutant myocilin is toxic to cells in the part of the eye that regulates pressure. These genetically inherited variants of myocilin are toxic because they clump together in the front of the eye, preventing fluid flow out of the eye, which then raises eye pressure. This cascade of events leads to early-onset glaucoma, which is estimated to affect up to a million people from childhood to age 35.

Nearly 100 different mutations in the 230 amino acid OLF domain of myocilin are linked to glaucoma. In most protein domains of this size, mutating one amino acid won’t cause toxic misfolding; the cell will be able to remove the protein efficiently before it causes a problem. That’s not the case with myocilin.

“Mutating any one of these 100 or so amino acids causes the protein to aggregate,” Lieberman said. “Myocilin is exquisitely sensitive to aggregation and the cell cannot handle it.”

After determining the OLF domain structure, the researchers mapped and categorized the locations of mutations linked to early-onset glaucoma. They identified three different locations on OLF where mutations are most likely to trigger protein aggregation.

“We were able to provide new information on whether mutations reported among glaucoma cases in the general population are pathogenic or not,” Lieberman said.

Further analysis of the myocilin OLF domain in the context of the broader OLF family found that OLF domains have unique surface features. Therefore, a high priority for further research is to develop new reagents to selectively target these specific regions and tease apart the domain’s function in a variety of biological and disease contexts.

“We’re going to be able to figure out what the OLF domain does in a more detailed way by having better reagents. The structure enables that new knowledge,” Lieberman said.

This research is supported by grants from the American Health Assistance Foundation, Glaucoma Research Foundation, and the National Institutes of Health (R01EY021205). Any conclusions or opinions are those of the authors and do not necessarily represent the official views of the sponsoring agencies.