Researchers have shown that they can assemble DNA nanostructures in a solvent containing no water. 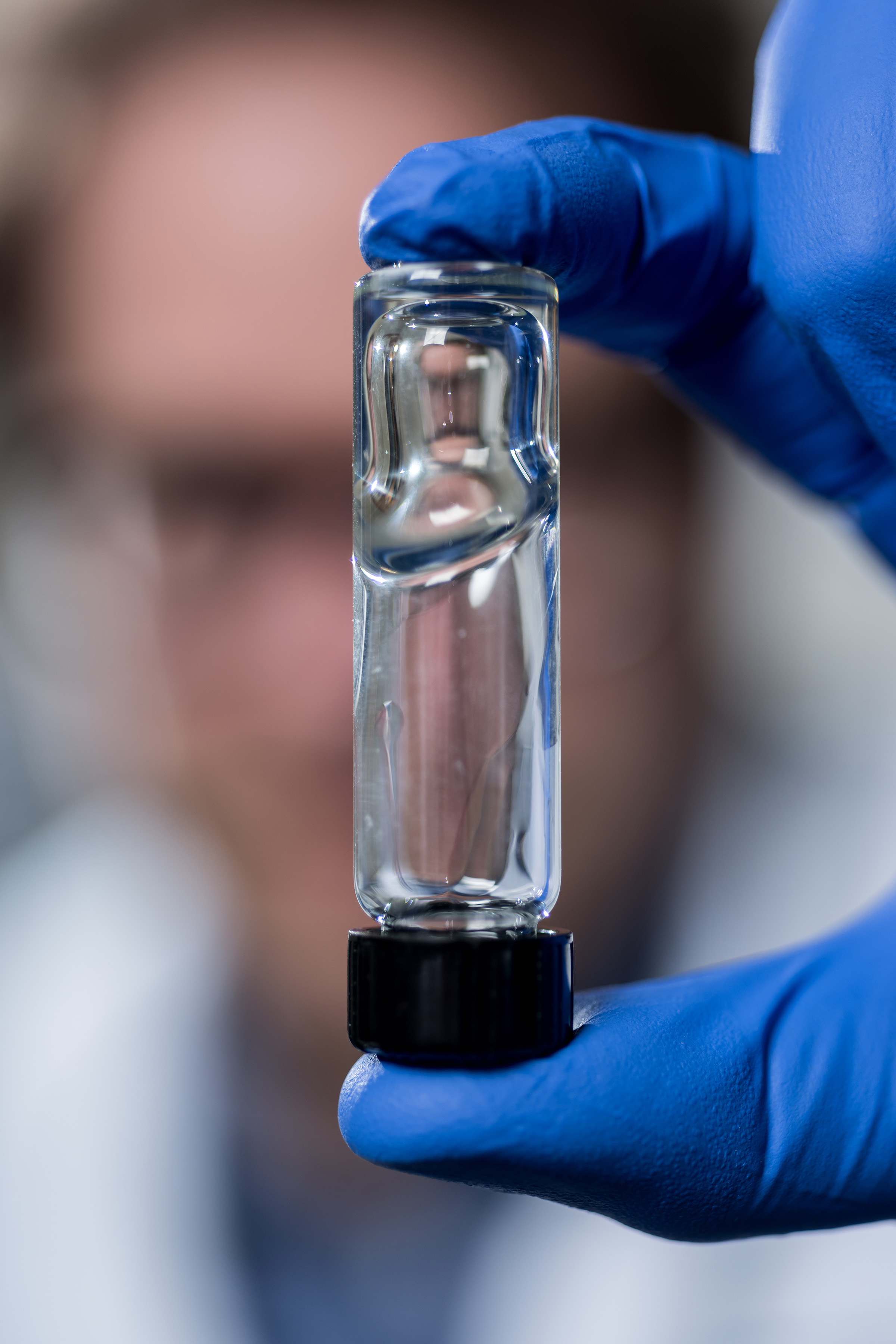 Scientists around the world are using the programmability of DNA to assemble complex nanometer-scale structures. Until now, however, production of these artificial structures has been limited to water-based environments, because DNA naturally functions inside the watery environment of living cells.

Researchers at the Georgia Institute of Technology have now shown that they can assemble DNA nanostructures in a solvent containing no water. They also discovered that adding a small amount of water to their solvent increases the assembly rate and provides a new means for controlling the process. The solvent may also facilitate the production of more complex structures by reducing the problem of DNA becoming trapped in unintended structures.

The research could open up new applications for DNA nanotechnology, and help apply DNA technology to the fabrication of nanoscale semiconductor and plasmonic structures. Sponsored by the National Science Foundation and NASA, the research will be published as the cover story in Volume 54, Issue 23 of the journal Angewandte Chemie International Edition.

“DNA nanotechnology structures are getting more and more complex, and this solvent could help researchers that are working in this growing field,” said Nicholas Hud, a professor in Georgia Tech’s School of Chemistry and Biochemistry. “With this work, we have shown that DNA nanostructures can be assembled in a water-free solvent, and that we can mix water with the same solvent to speed up the assembly. We can also take the structures that were assembled in this solvent mixed with water –remove the water by applying vacuum – and have the DNA structures remain intact in the water-free solvent.”

The assembly rate of DNA nanostructures can be very slow, and depends strongly on temperature. Raising the temperature increases this rate, but temperatures that are too high can cause the DNA structures to fall apart. The solvent system developed at Georgia Tech adds a new level of control over DNA assembly. DNA structures assemble at lower temperatures in this solvent, and adding water can adjust the solvent’s viscosity, which allows for faster assembly compared to the water-free version of the solvent.

“This solvent changes the rules,” said Isaac Gállego, a postdoctoral researcher in Hud’s lab and the paper’s first author. “We now have a tool that controls DNA assembly kinetics and thermodynamics all in one solvent. This solvent also offers enhanced properties for nanotechnology and for the stability of these nanomaterials in solution.”

Gállego had worked in DNA nanotechnology before coming to Georgia Tech, and wasconvinced that alternative solvents could advance this field. At Georgia Tech he evaluated new solvents for use with DNA nanostructures, solvents that had been designed for other purposes. One solvent he tested, called glycholine that is a mixture of glycerol and choline chloride, allowed a two-dimensional DNA origami structure to assemble in six days at a temperature of 20 degrees Celsius.

Not only did the glycholine assemble the DNA structure at a relatively low temperature, but it also avoided “kinetic traps,” intermediate structures that are stable, but not the desired structure, Gállego said. Structures that fail to completely assemble are a major source of low yields in the DNA nanofabrication process.

“This solvent could provide a new tool to make more complicated designs with DNA because you can avoid trapping these complex structures at intermediate steps,” he added. “Kinetic traps are among the bottlenecks for producing more complicated DNA nanostructures.”

Glycholine is miscible in water, so it can be mixed in any ratio with water to control the kinetics of the assembly process. For instance, one structure that assembles in six days in pure solvent will assemble in three hours in a glycholine solution containing 10 percent water. A key feature of the new solvent system is that it does not require changes to existing DNA nanotechnology designs that were developed for water.

“You can go back and forth between hydrated and non-hydrated states,” said Gállego. “This solvent system preserves the DNA structures that have been developed to work in water.”

The solvent system could improve the combined use of metallic nanoparticles and DNA based materials. In the typical aqueous solvents where DNA nanotechnology is performed, nanoparticles are prone to aggregation. The solvent’s low volatility could also allow storage of assembled DNA structures without the concern that a water-based medium would dry out.

The research team, which also included Martha Grover from Georgia Tech’s School of Chemical & Biomolecular Engineering, has so far used the solvent to assemble three structures, including two DNA origami structures. In future work, they hope to use the control provided by water-free solvents to obtain dynamic DNA structural rearrangements that are not possible in water, and investigate other solvents that may have additional properties attractive for nanotechnology applications.

“We were confident all along that we would find a solvent that would be compatible with existing DNA nanotechnology,” added Hud, who is also director of the NSF-NASA Center for Chemical Evolution and associate director of the Parker H. Petit Institute of Bioengineering and Bioscience, both at Georgia Tech. “What was surprising was finding a solvent that allows the assembly of structures more easily than in water. That was completely unexpected because DNA nanotechnology was developed in water.”

The research on water-free solvents grew out of Georgia Tech research into the origins of life. Hud and colleagues had wondered if the molecules necessary for life, such as the ancestor of DNA, could have developed in a water-free solution. In some cases, he noted, the chemistry necessary to make the molecules of life would be much easier without water being present.

“This work was inspired by research into the origins of life with the basic question of whether complex DNA structures could exist in non-aqueous solvents, and we showed that they can,” said Hud. “And what we’ve found working with these new solvents could help answer some questions about the origins of life, while also having applications in nanotechnology.” 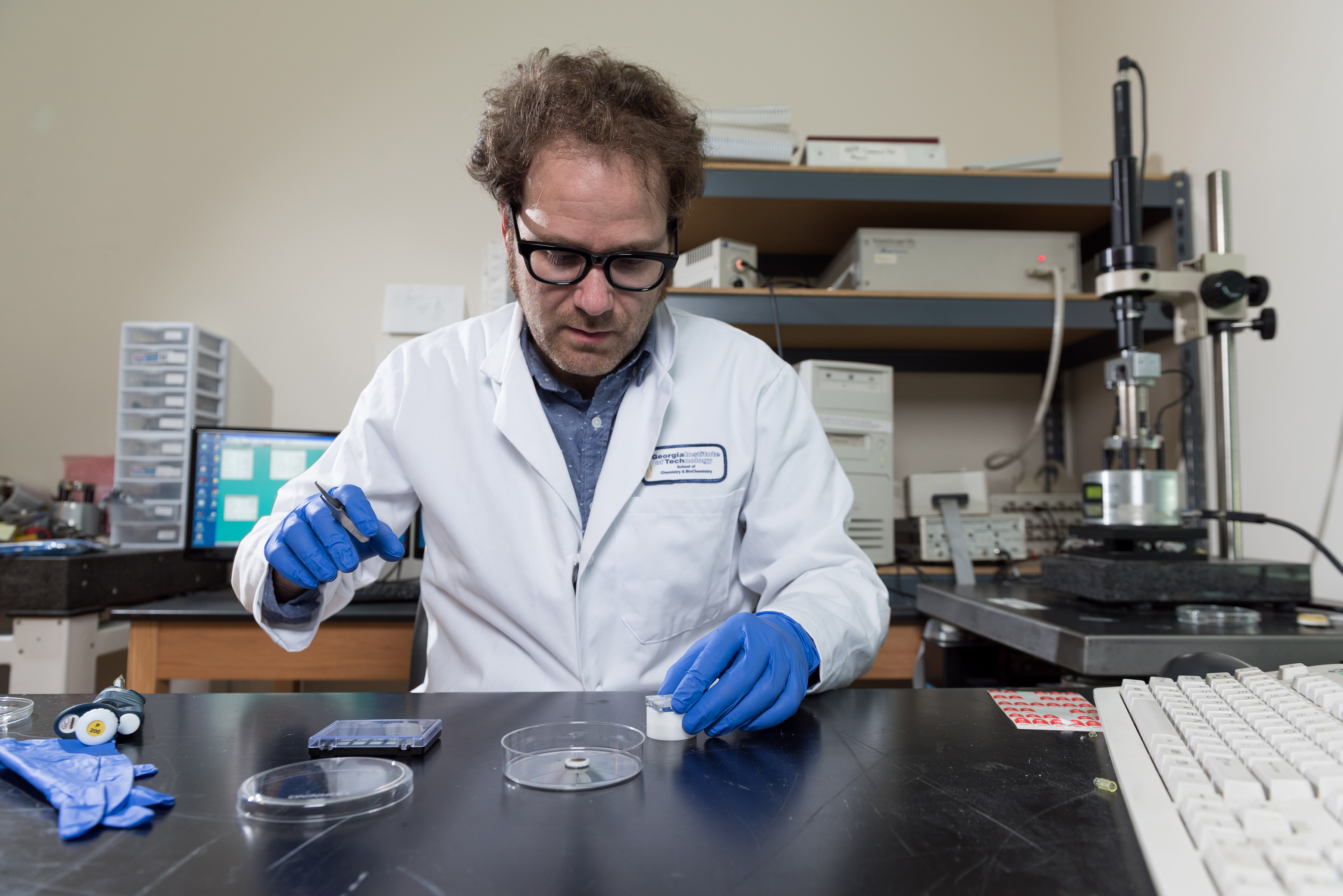 The figure shows three different DNA nanostructures assembled at room temperature in water-free glycholine (left) and in 75 percent glycholine-water mixture (center and right). The structures are (from left to right) a tall rectangle two-dimensional DNA origami, a triangle made of single-stranded tails, and a six-helix bundle three-dimensional DNA origami. (Image courtesy of Isaac Gállego).