Students and a professor in Industrial & Systems Engineering are lending their expertise to the Georgia Tech Police Department and Atlanta Police Department to help them track and solve crime more efficiently. 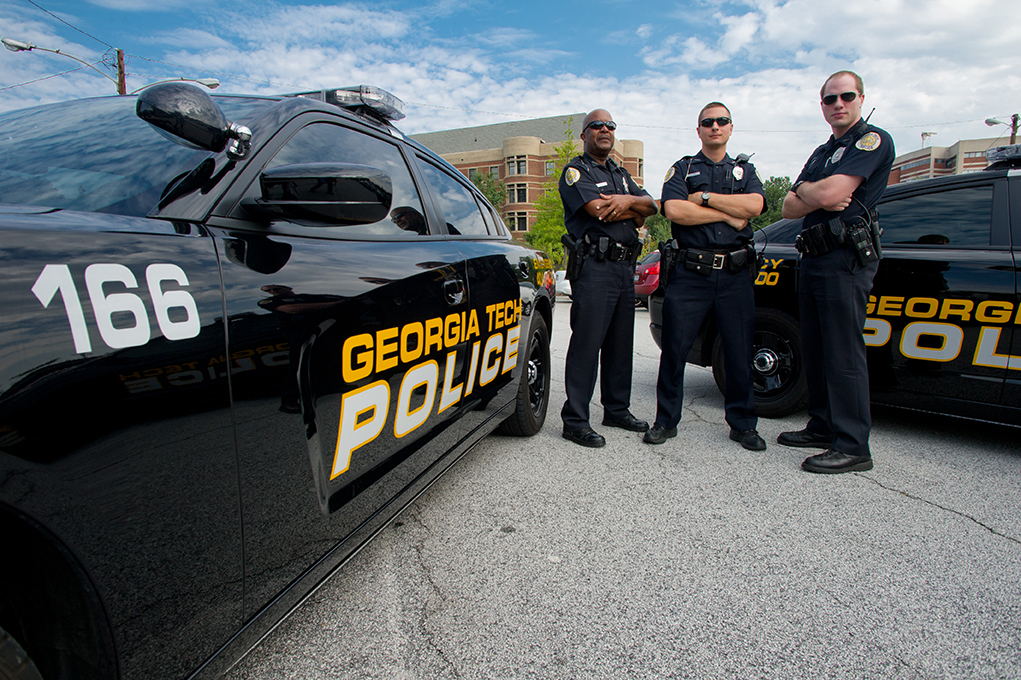 Policing can be a logistical challenge — scheduling officers for shifts, deploying them to various zones, and tracking where and when crime happens. When it comes to protecting the Georgia Tech campus, it only makes sense that the Georgia Tech Police Department (GTPD) would partner with some of the best industrial engineers in the country to do it right.

It was about a year and a half ago when David Goldberg, assistant professor in Georgia Tech’s H. Milton Stewart School of Industrial & Systems Engineering, contacted GTPD to see if he could make himself useful in the department’s work. Goldberg’s research focuses on applied probability, optimization, and machine learning.

“I wanted to find a way to use my work on campus,” he said. “Sometimes as an academic you lose sight of what you can do right here.”

Since then, Goldberg and a team of undergraduates have been working with GTPD and the Atlanta Police Department (APD) to make enhanced use of their data from recent years. So far, Goldberg’s team has input the rich set of data to present visualizations of when and how crime has taken place.

The preliminary analysis showed that crime has dropped, both on campus and in Atlanta, in recent years. The project’s next steps will be to see if the researchers can use that data to predict what crime will look like in the future, and to build more optimization into what GTPD and APD are already doing. They will analyze how crimes may correlate with one another, how crime clusters, and how it changes over time, especially in relation to how Atlanta has grown and evolved in recent years.

“There’s a huge amount of creativity involved, which I think is vital to developing innovative solutions,” said David Wang, a fourth-year student who has been working on the project for about five months. The project involves around half a dozen undergraduate students and recently won a President’s Undergraduate Research Award.

Researchers are making use of resources such as Microsoft MapPoint, Google Earth, and Geographic Information System software as they examine crime locations and police zones. Knowing that their efforts will play a role in keeping others safe has added significance to the work.

“When we come up with suggestions and solutions, we know they will potentially be applied in real-world practice, and that means huge responsibility,” said Henry Wang, a fourth-year student who has been part of the project since fall 2014.

That responsibility, though, has motivated the team to work harder and take the work more seriously. Goldberg believes the impact of working with something so close to home creates excitement and energy that can’t be reproduced in a lab.

“It’s just so different from other research work I have done,” said Bingyi Bao, another undergraduate researcher. “The topics of most research work are about inventing new theories, but this project is about us.”

For GTPD, working with researchers gives them another way to get to know the campus and who they are working to serve and protect. Not only does their police work protect individuals in the community, but it also protects the research enterprise at work every day.

“I can’t impress enough what it means to us to have this partnership,” said Randy Ory, crime analyst for GTPD.

For Goldberg, it’s a chance to collaborate and use his expertise to improve the campus community. With the early success of working with GTPD, he is looking for other ways to build optimization into campus operations.

“We want to use sophisticated analytics and big data technology to help support, optimize, and fine-tune policies and decisions,” he said. “I love for academics to have a direct and meaningful impact on local communities.”