Closing the Loop with Optogenetics

Researchers have created a technology called the optoclamp which closes the loop in optogenetic systems. 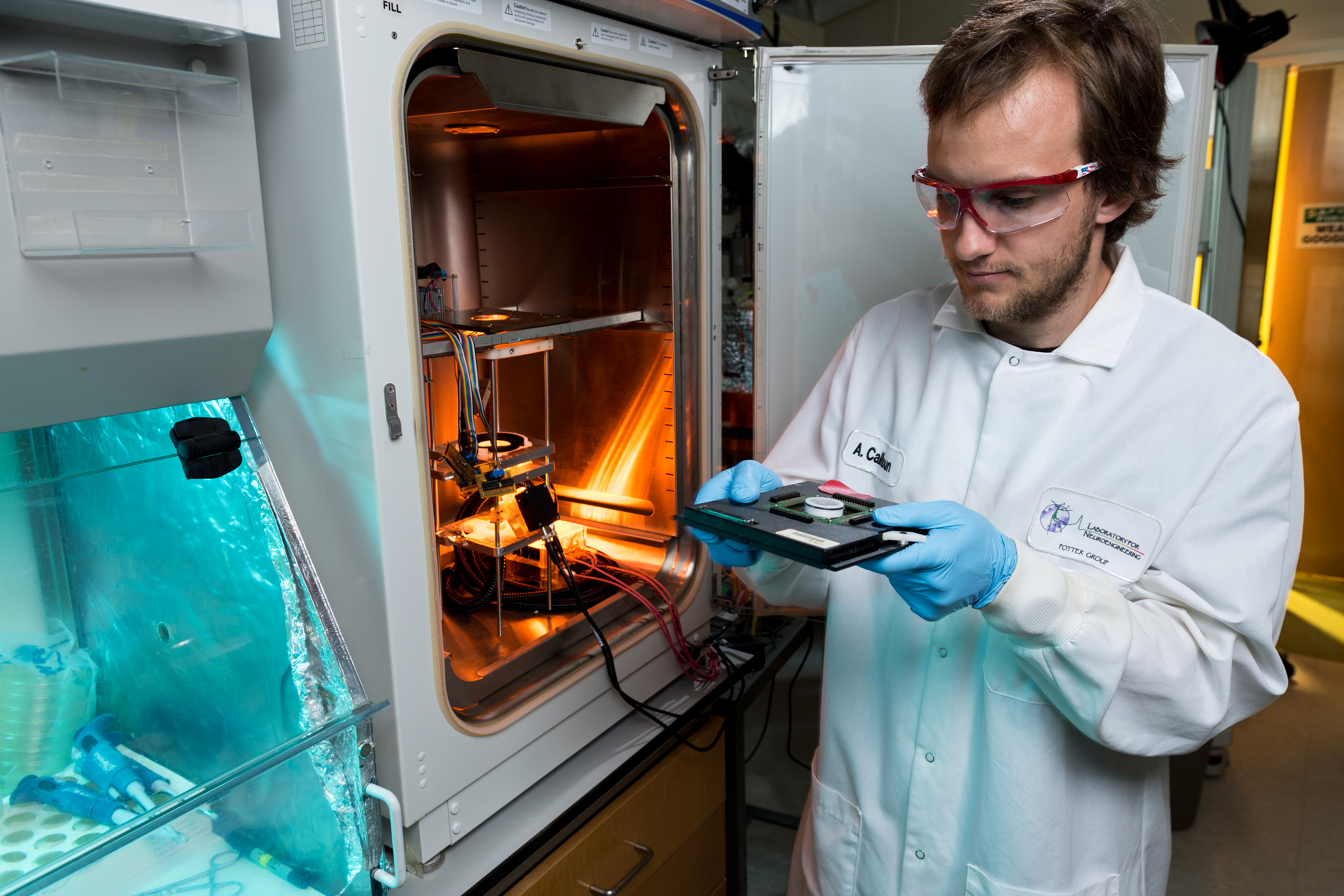 Riley Zeller-Townson, a Georgia Tech Ph.D. student in Steve Potter’s lab, demonstrates preparation of a cell culture for placement into the optoclamp. The optoclamp uses a computer to acquire and process the neuronal response to optical stimuli in real-time and then vary the light input to maintain a desired firing rate. (Credit: Rob Felt, Georgia Tech)

Optogenetics provides a powerful tool for studying the brain by allowing researchers to activate neurons using simple light-based signals. But until now, these optical stimulation techniques have been “open loop,” meaning they lack the kind of feedback control that most biological and engineering systems use to maintain a steady operating state.

An engineering example of closed-loop control is a simple thermostat used to maintain a steady temperature in the home. Without it, heating or air conditioning would run without reacting to changes in outside conditions, allowing inside temperatures to vary dramatically.

Optogenetics technology places genes that express light-sensitive proteins into mammalian cells that normally lack such proteins. When the proteins are illuminated with specific wavelengths of light, they change the behavior of the cells, introducing certain types of ions or pushing ions out of the cells to alter electrical activity. But without a feedback loop, scientists could only assume that the optical signals were having the effects desired – or try to confirm at the end of the experiment that this had happened.

To address that shortcoming, researchers have created an open-source technology called the optoclamp which closes the loop in optogenetic systems. The technique uses a computer to acquire and process the neuronal response to the optical stimulus in real-time and then vary the light input to maintain a desired firing rate. By providing this feedback control, the optoclamp could facilitate research into new therapies for epilepsy, Parkinson’s disease, chronic pain – and even depression.

“Our work establishes a versatile test bed for creating the responsive neurotherapeutic tools of the future,” said Steve Potter, an associate professor in the Wallace H. Coulter Department of Biomedical Engineering at Georgia Tech and Emory University. “Neural modulation therapies of the future, whether they be targeted drug delivery, electrical stimulation or even light-plus-optogenetics through fiber optics, will all be closed loop. That means they will be responsive to the moment-to-moment needs of the nervous system.”

The research, supported by the National Institutes of Health and the National Science Foundation, was recently published in the open-access journal eLife. Feedback control already exists for neural stimulation systems based on electrical inputs, but the optoclamp is the first system to provide similar closed-loop control for optical stimulation.

Researchers in Potter’s lab studied the effects of open-loop optical stimulation on neural systems, and found considerable variation in the responses of neuronal networks grown on multi-electrode arrays and in the neurons of animal models.

“The same stimulus pattern can produce highly variable levels of activity,” said Jon Newman, who built the optoclamp while a Ph.D. student in Georgia Tech’s Laboratory for Neuroengineering. Newman is now a postdoctoral researcher at MIT. “The amount of optical stimulation needed to achieve the same level of activity varied by orders of magnitude, depending on the population that was being controlled, or even in the same type of cells and preparation, but within different subjects.”

In a cultured cortical network, the optoclamp records activity from as many as 200 cells, using them to measure activity in the larger culture population, which can include as many as a million cells.

“Because we have all those electrodes, we can process the data in real-time and then compare the amount of activity being expressed by the culture to a target rate, then use the difference between those two signals to inform our optical stimulator to vary the intensities of different wavelengths of light,” Newman explained.

The optoclamp can be used to control cell cultures grown atop electrode arrays, as well as in living animal models in which electrodes have been implanted.

In research conducted with colleagues at Emory University, the optoclamp’s ability to maintain a steady neural firing state allowed researchers to study a key control issue in homeostatic plasticity, a phenomenon that results from a lack of neural stimulation. Scientists had believed that the effect was controlled by the firing rate of cells, but the optoclamp allowed a team of researchers from Georgia Tech and Emory University to clamp firing at normal levels during the addition of a drug that inhibits neurotransmission. This showed that neurotransmission levels, not firing activity, governed a key form of homeostatic plasticity.

“Effectively, we were able to decouple two things that are normally very closely related,” said Newman. “This is potentially a very big deal in terms of developing therapies for aberrant forms of synaptic plasticity.” Potential applications include chronic pain, epilepsy, tinnitus, phantom limb syndrome and other nervous systems disorders where the brain has over-reacted to the loss of normal inputs.

That work, recently published in the journal Nature Communications, was a collaboration with Emory University Professor Pete Wenner and former graduate student Ming-fai Fong, demonstrating the value of bringing biological scientists together with engineers. Newman, an engineer by training, says concepts common in engineering can be useful in the life sciences.

“Closed-loop control is a concept that is woven through all engineered systems, but it’s often hard to find in the biological sciences,” he said. “Any time you can introduce feedback control into an experiment, it almost always produces better control of the variables of interest. Feedback control is an extremely important concept for the life sciences.”

Scientists are already using the optoclamp in its current form, but the researchers hope to improve spatial differentiation of the optical signals, allowing experiments to focus stimulation on specific areas of the brain or brain cell cultures. The light signals now affect an entire culture or brain region.

“We want to precisely control where photons are being sent to activate different cells,” Newman said. “Optogenetics allows genetic specification of which cells express these proteins, and that gives you some level of spatial control. But I don’t believe that’s as precise as what will be required to speak the language of the brain.” 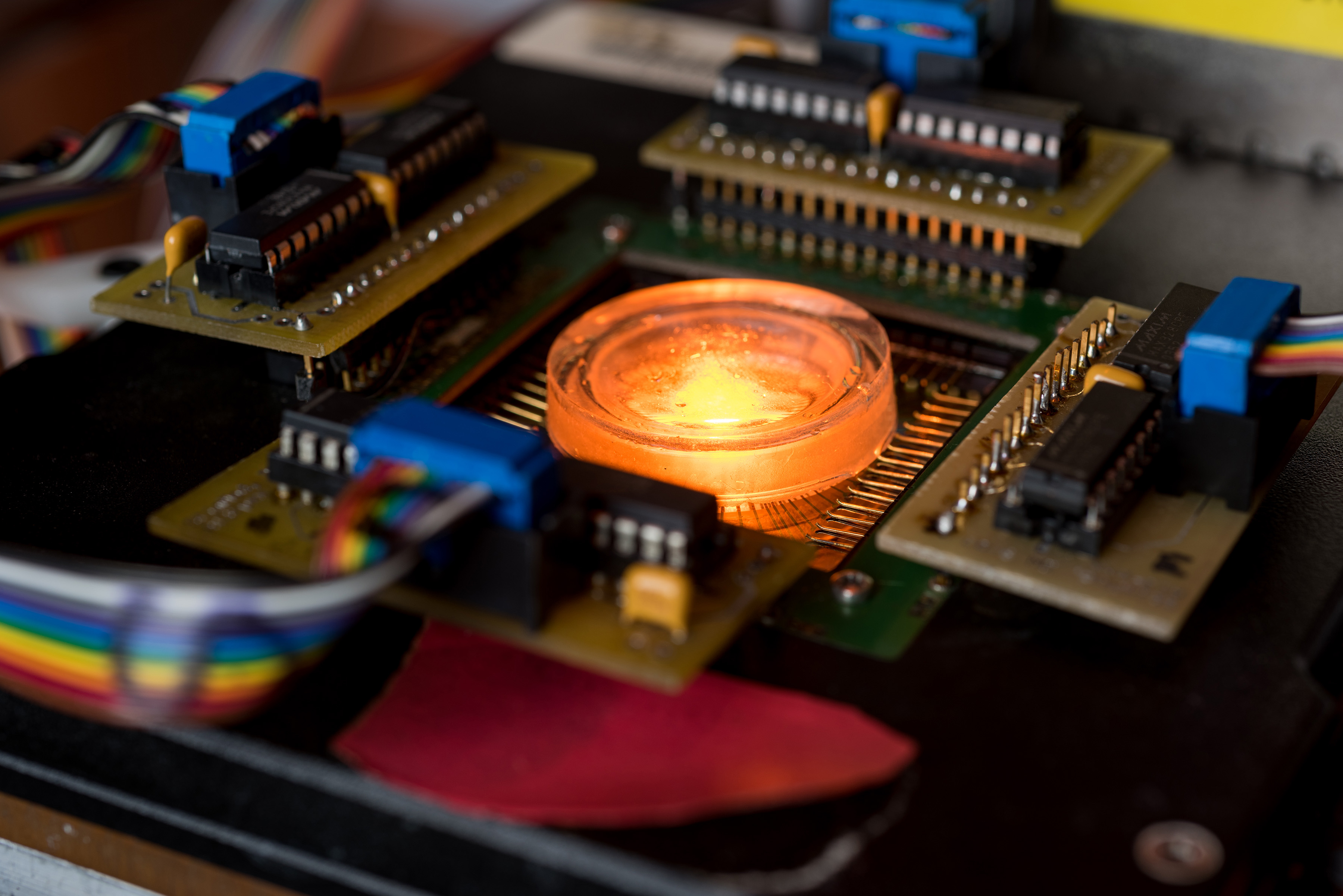 This close-up image shows a cultured cortical network placed into the optoclamp. The device uses a computer to acquire and process the neuronal response to optical stimuli in real-time and then vary the light input to maintain a steady firing rate. The network can be controlled for many hours even when drugs are added that would normally have large effects on the network’s firing level.  (Credit: Rob Felt, Georgia Tech) 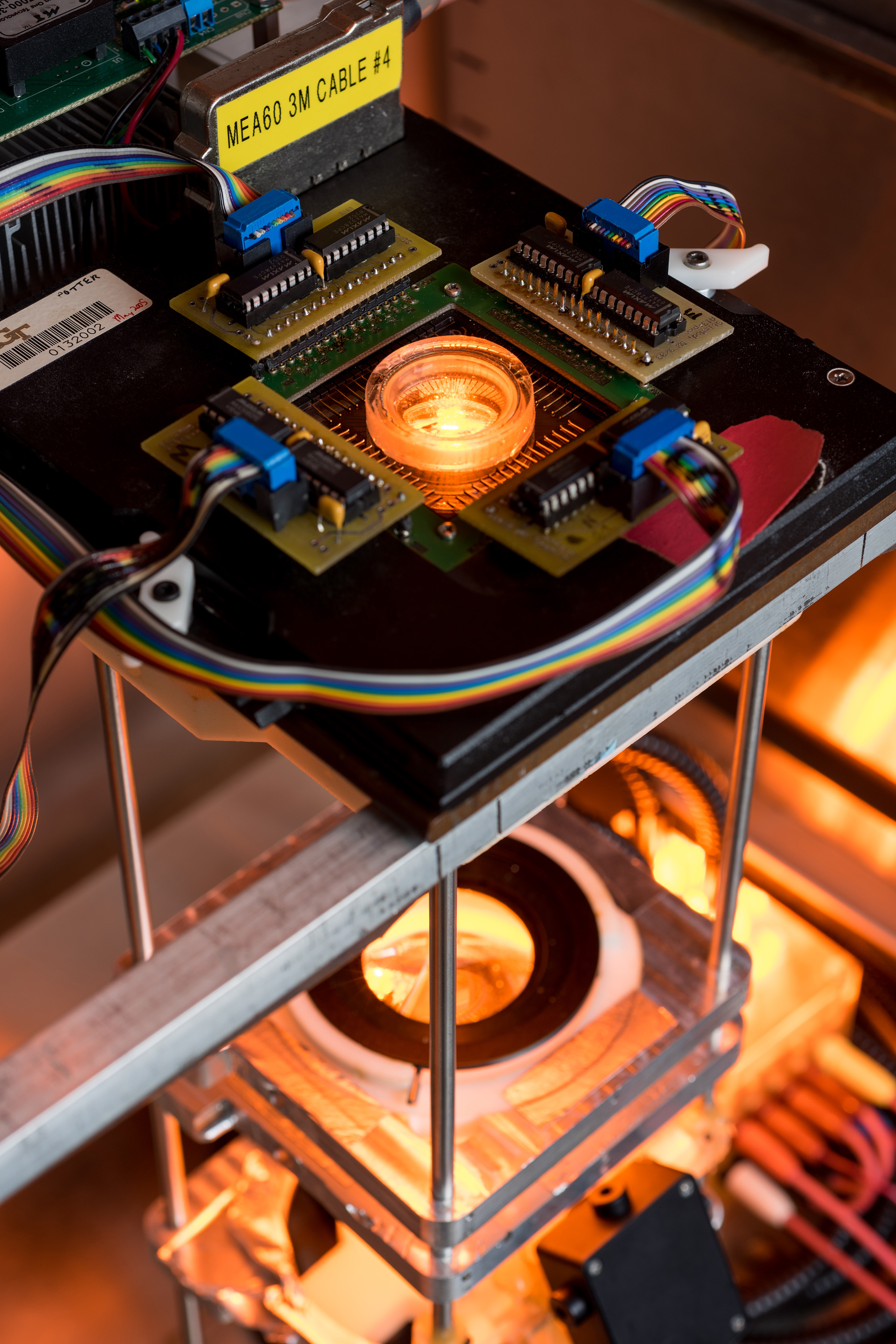 This image shows the full stimulation light train of the optoclamp, which uses a computer to acquire and process the neuronal response to optical stimuli in real-time and then vary the light input to maintain a desired firing rate. (Credit: Rob Felt, Georgia Tech)