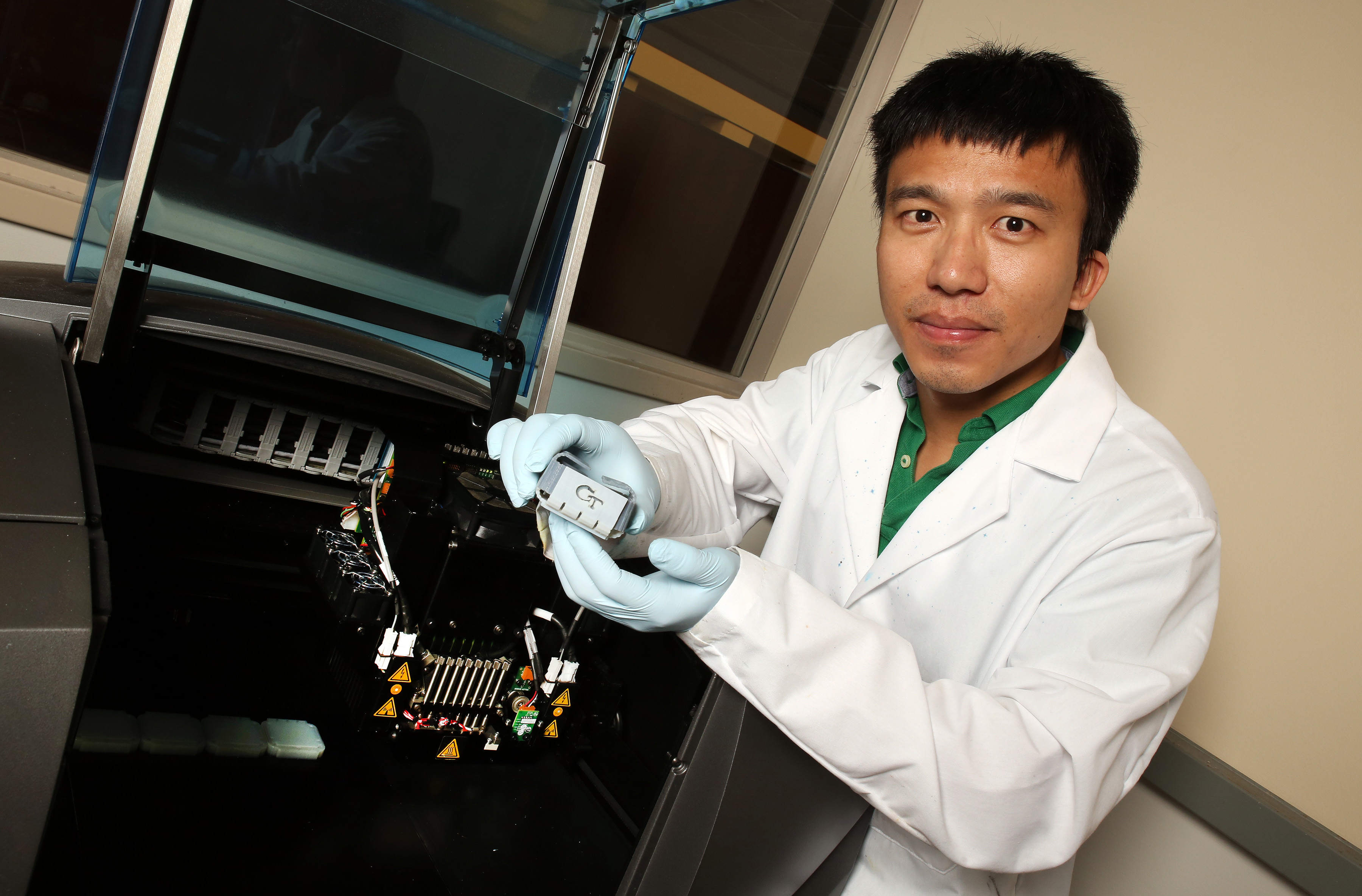 Yiqi Mao, a postdoctoral fellow in the laboratory of Professor Jerry Qi at Georgia Tech, shows a folded box structure produced from smart shape-memory materials. The materials were created with the 3-D printer shown with him. (Credit: Candler Hobbs, Georgia Tech)

The technology, developed by researchers at the Georgia Institute of Technology and the Singapore University of Technology and Design (SUTD), could be used to create 3-D structures that sequentially fold themselves from components that had been flat or rolled into a tube for shipment. The components could respond to stimuli such as temperature, moisture or light in a way that is precisely timed to create space structures, deployable medical devices, robots, toys and range of other structures.

The researchers used smart shape memory polymers (SMPs) with the ability to remember one shape and change to another programmed shape when uniform heat is applied. The ability to create objects that change shape in a controlled sequence over time is enabled by printing multiple materials with different dynamic mechanical properties in prescribed patterns throughout the 3-D object. When these components are then heated, each SMP responds at a different rate to change its shape, depending on its own internal clock. By carefully timing these changes, 3-D objects can be programmed to self-assemble.

The research was reported September 8 in the journal Scientific Reports, which is published by Nature Publishing. The work is funded by the U.S. Air Force Office of Scientific Research, the U.S. National Science Foundation and the Singapore National Research Foundation through the SUTD DManD Centre.

“Previous efforts to create sequential shape changing components involved placing multiple heaters at specific regions in a component and then controlling the on-and-off time of individual heaters,” explained Jerry Qi, a professor in the George W. Woodruff School of Mechanical Engineering at Georgia Tech. “This earlier approach essentially requires controlling the heat applied throughout the component in both space and time and is complicated. We turned this approach around and used a spatially uniform temperature which is easier to apply and then exploited the ability of different materials to internally control their rate of shape change through their molecular design.”

The team demonstrated the approach with a series of examples including a mechanism that can be switched from a flat strip into a locked configuration as one end controllably bends and threads itself through a keyhole. They also demonstrated a flat sheet that can fold itself into a 3-D box with interlocking flaps. These examples all require the precise control of the folding sequence of different parts of the structure to avoid collisions of the components during folding.

“We have exploited the ability to 3-D print smart polymers and integrate as many as ten different materials precisely into a 3-D structure,” said Martin L. Dunn, a professor at Singapore University of Technology and Design who is also the director of the SUTD Digital Manufacturing and Design Centre. “We are now extending this concept of digital SMPs to enable printing of SMPs with dynamic mechanical properties that vary continuously in 3-D space.”

The team used companion finite element simulations to predict the responses of the 3-D printed components, which were made from varying ratios of two different commercially-available shape-memory polymers. A simplified reduced-order model was also developed to rapidly and accurately describe the physics of the self-folding process.

“An important aspect of self-folding is the management of self-collisions, where different portions of the folding structure contact and then block further folding,” the researchers said in their paper. “A metric is developed to predict collisions and is used together with the reduced-order model to design self-folding structures that lock themselves into stable desired configurations.”

The research team envisions a broad range of applications for their technology. For example, an unmanned air vehicle might change shape from one designed for a cruise mission to one designed for a dive. Also possible would be 3-D components designed to fold flat or be rolled up into tubes so they could be easily transported, and then later deformed into their intended 3D configuration for use.

This research was supported by the Air Force Office of Scientific Research under grant FA9550-13-1-0088, by the National Science Foundation under awards CMMI-1404621, EFRI-1435452 and CMMI-1462895, and by the SUTD Digital Manufacturing and Design Centre, supported by the Singapore National Research Foundation. The content is the responsibility of the authors and does not necessarily represent the official views of the sponsoring agencies. 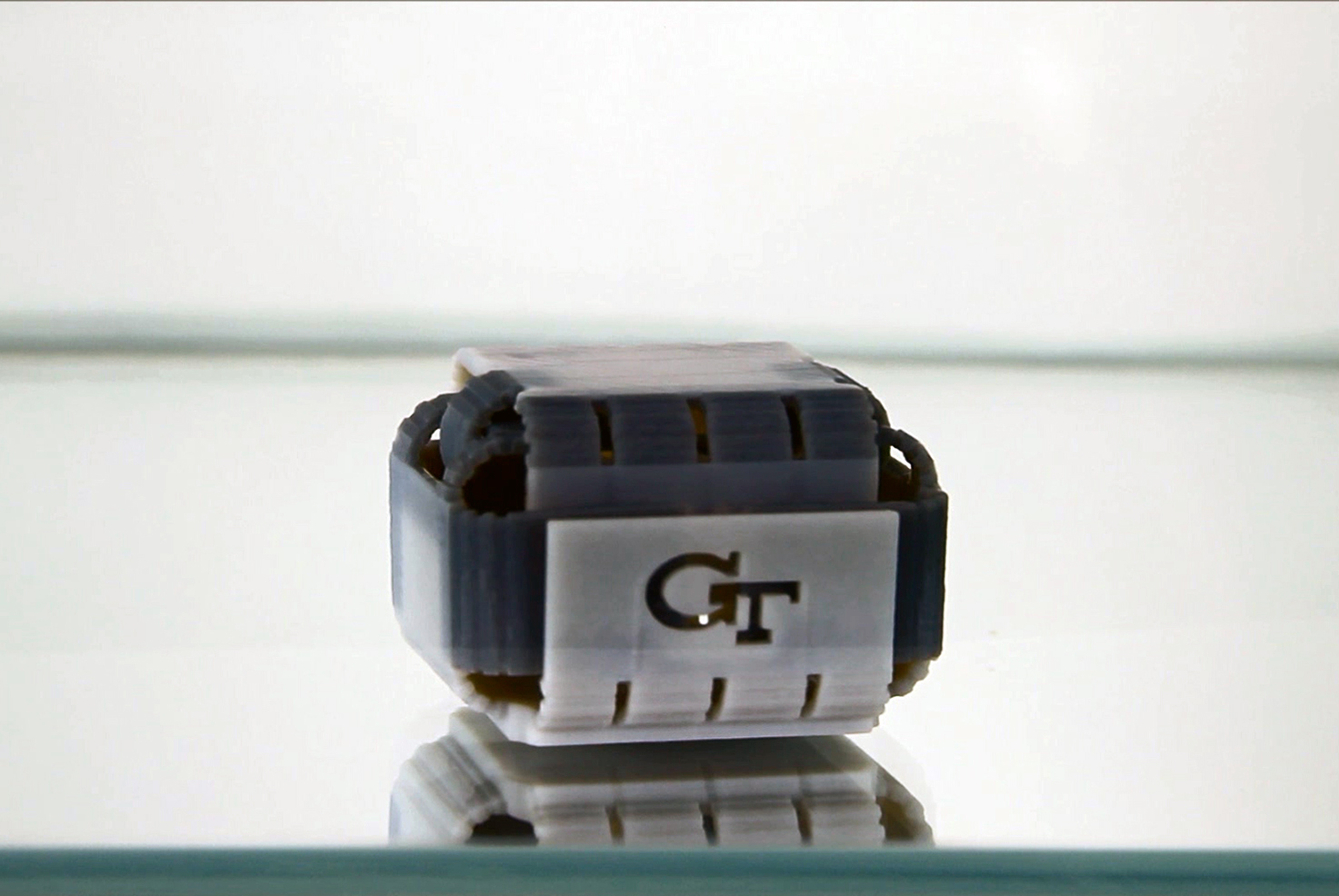 This image shows the folded box, which is intended to simulate a postal mailer. The folding is done in a tank of warm water to provide uniform heating to the materials. (Credit: Qi Laboratory) 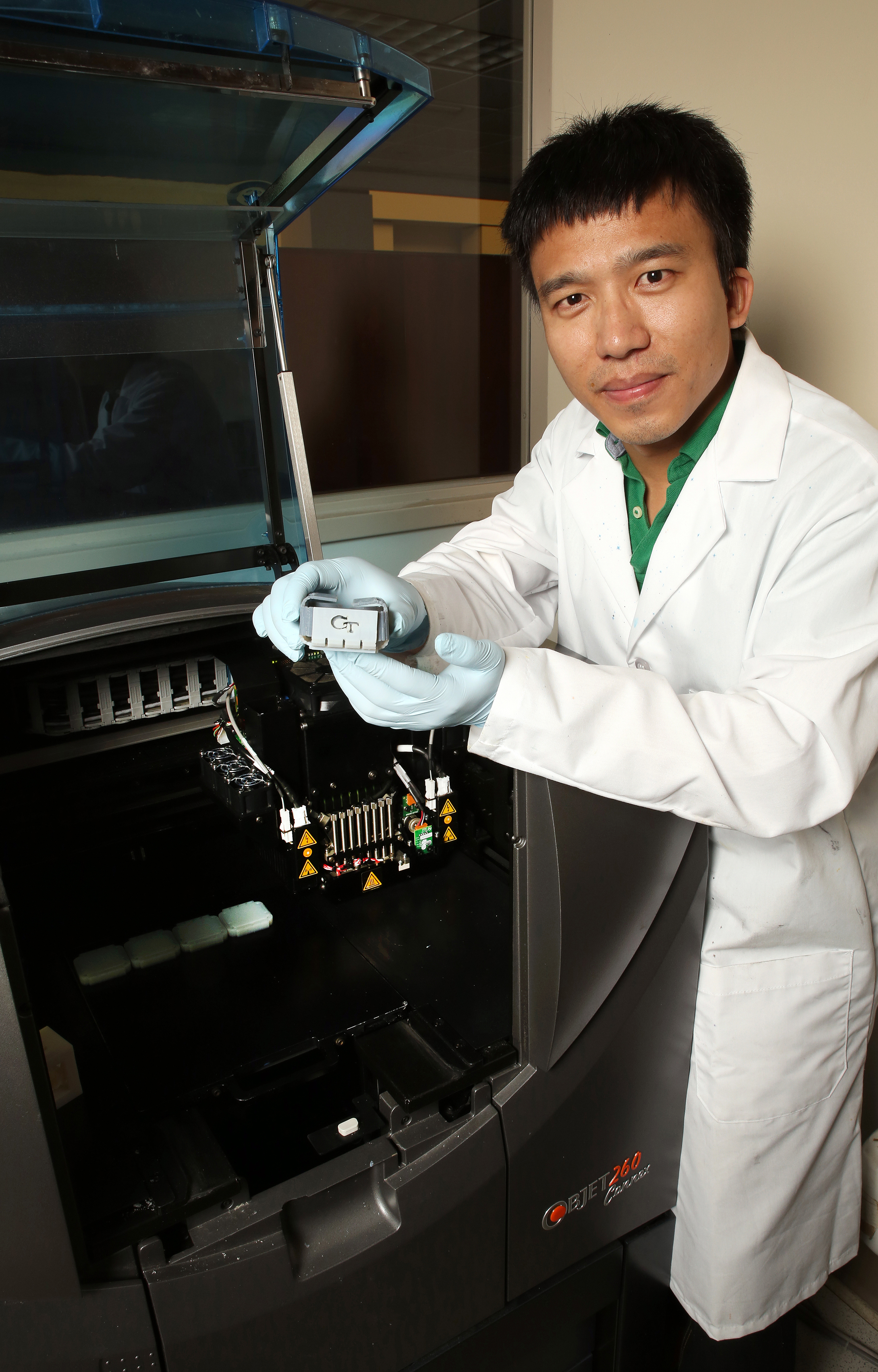 Yiqi Mao, a postdoctoral fellow in the laboratory of Professor Jerry Qi at Georgia Tech, shows a folded box structure produced from smart shape-memory materials. The materials were created with the 3-D printer shown with him. (Credit: Candler Hobbs, Georgia Tech) 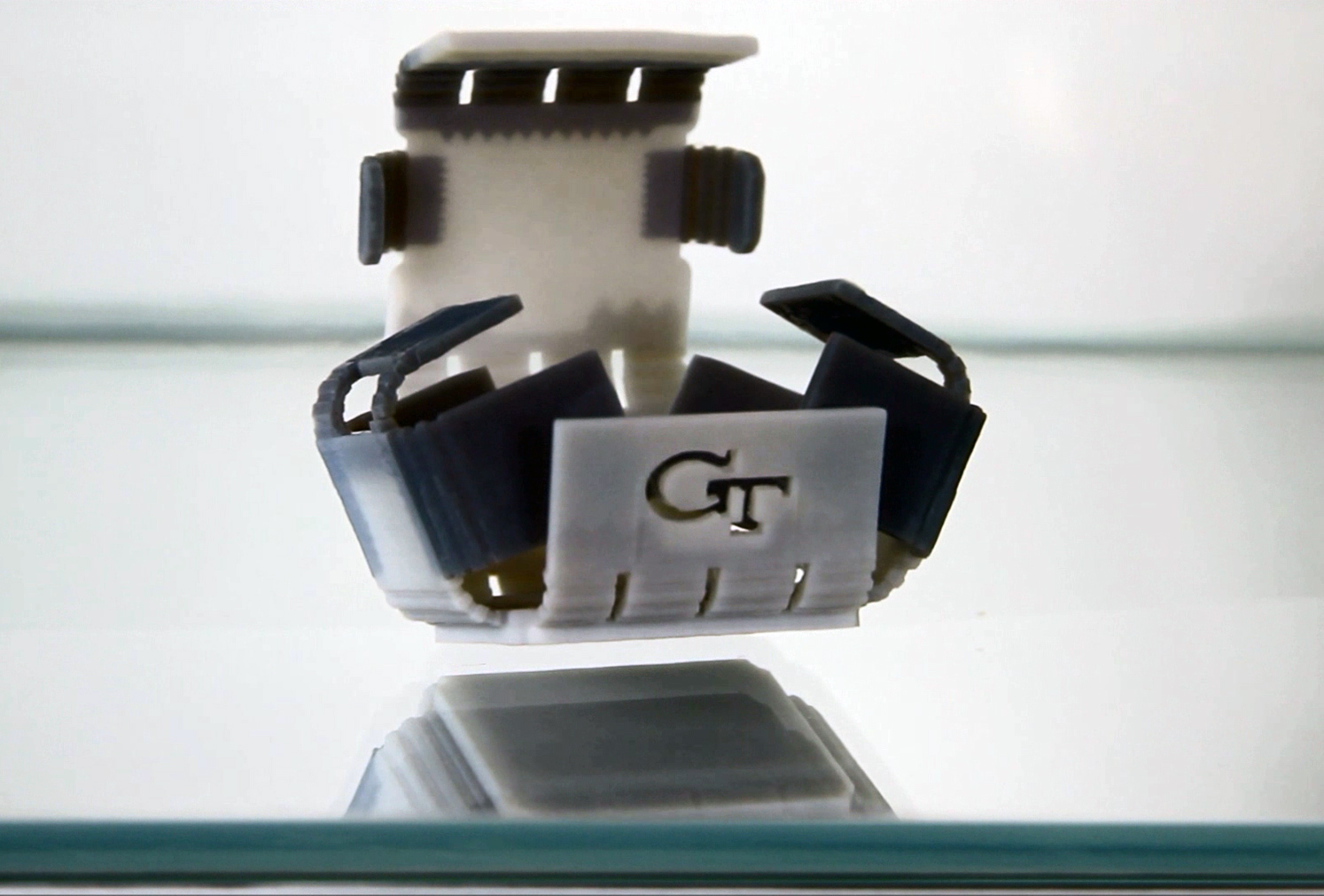 This image shows the self-folding process of smart shape-memory materials with slightly different responses to heat. Using materials that fold at slightly different rates is important to ensure that the components do not interfere with one another during the process. (Credit: Qi Laboratory) 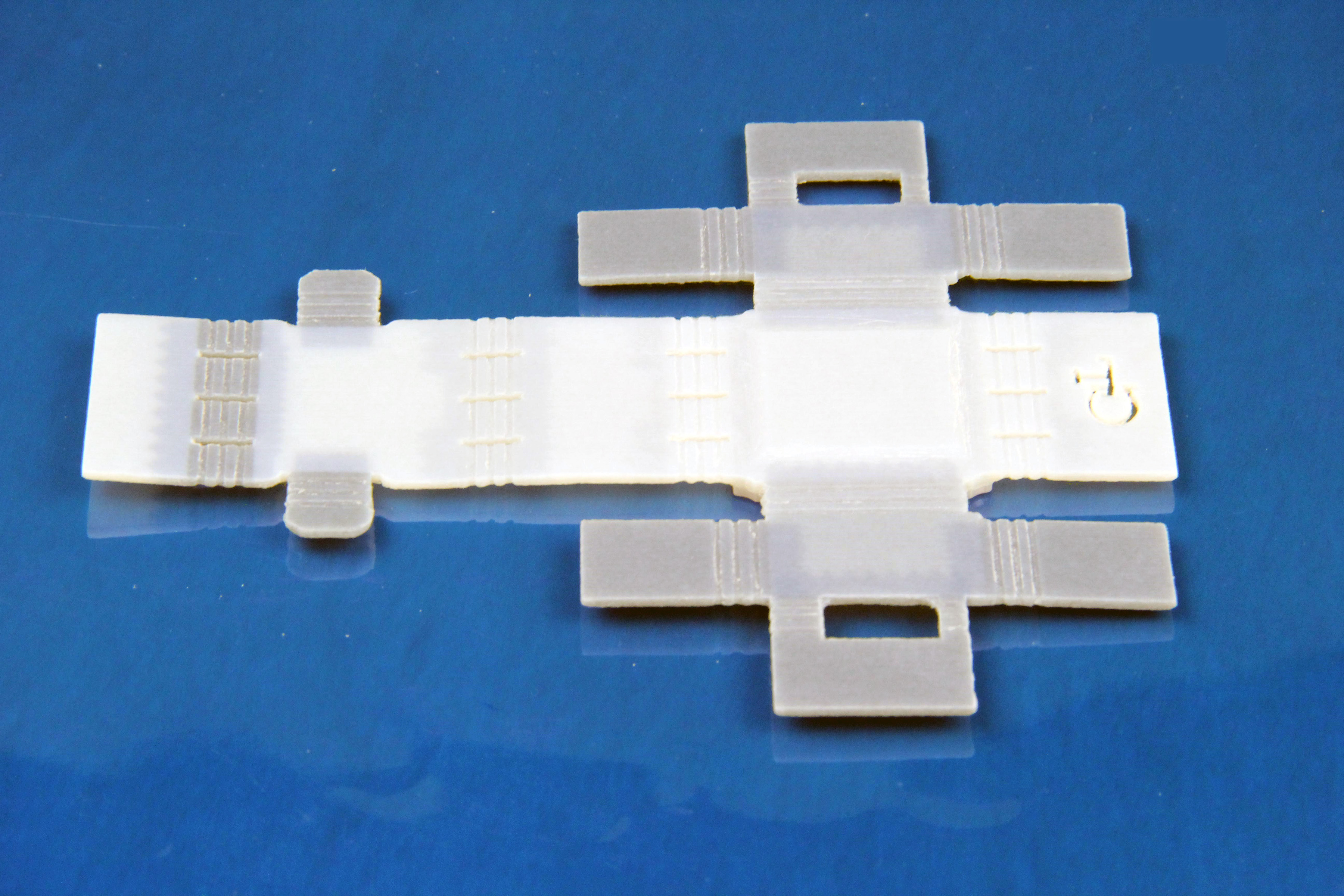