Researchers have demonstrated a new process for rapidly fabricating complex three-dimensional nanostructures from a variety of materials, including metals. 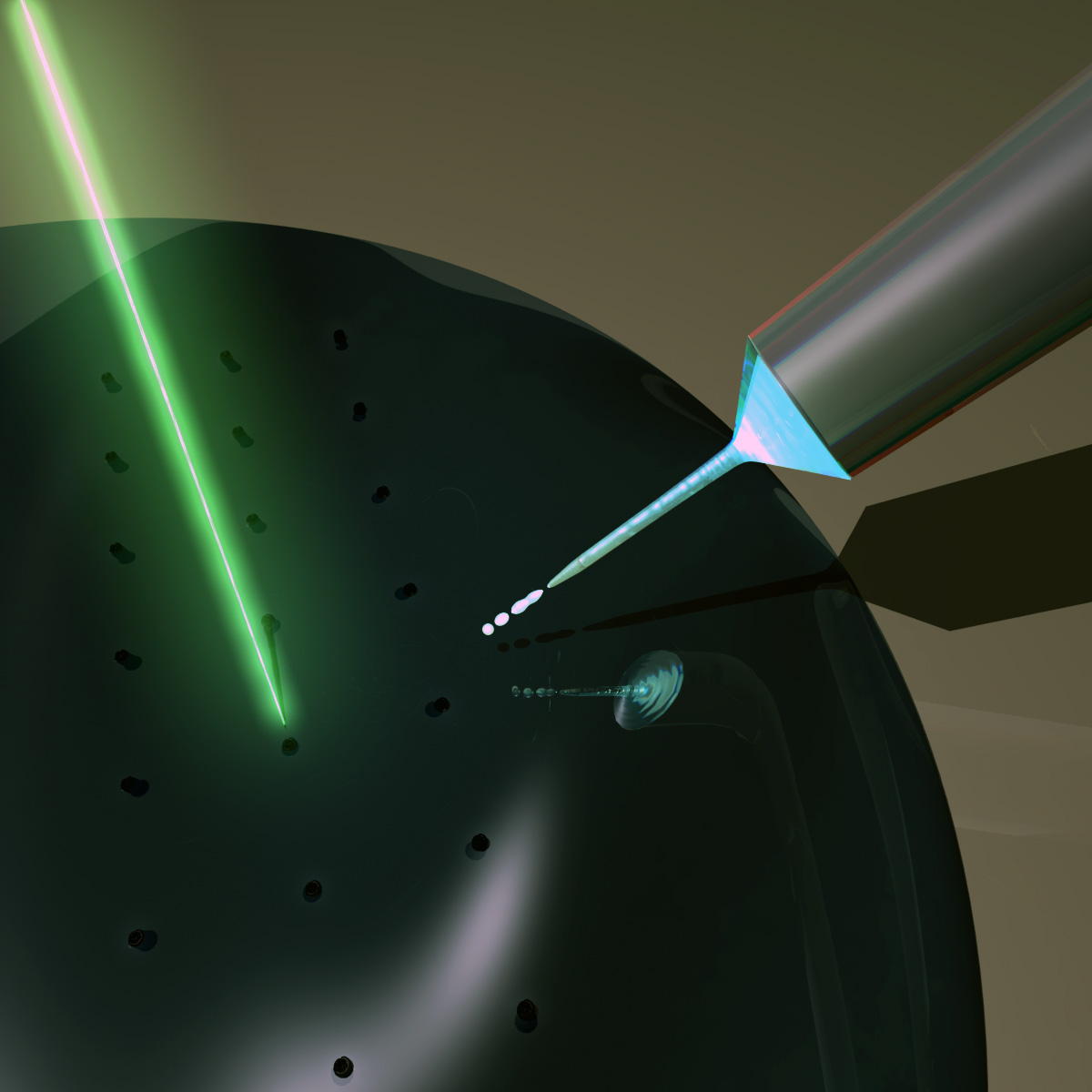 Shown are elements of the NESA-FEBID process involving nanoelectrospray delivery of electrically-energized liquid phase precursor to the substrate where it interacts with an e-beam, resulting in formation of nanoscale deposits. (Credit: Jeffrey Fisher, Georgia Tech)

Researchers have demonstrated a new process for rapidly fabricating complex three-dimensional nanostructures from a variety of materials, including metals. The new technique uses nanoelectrospray to provide a continuous supply of liquid precursor, which can include metal ions that are converted to high-purity metal by a focused electron beam.

The new process generates structures that would be impossible to make using gas-phase focused electron beam-induced deposition (FEBID) techniques, and allows fabrication at rates up to five orders of magnitude faster than the gas-phase technique. And because it uses standard liquid solvents, the new process could take advantage of a broad range of precursor materials. Multiple materials can also be deposited simultaneously.

“By allowing us to grow structures much faster with a broad range of precursors, this technique really opens up a whole new direction for making a hierarchy of complex three-dimensional structures with nanoscale resolution at the rate that is demanded for manufacturing scalability,” said Andrei Fedorov, a professor in the George Woodruff School of Mechanical Engineering at the Georgia Institute of Technology. “This could provide a fundamental shift in the way this field will go.”

The research was supported by the U.S. Department of Energy’s Office of Science and reported in the journal Nano Letters. Applications for the rapid electron beam writing of topologically complex 3D nanostructures could include new types of electrode topologies for batteries and fuel cells, vertically-stacked electronic memory, substrates for controlling cell differentiation and tiny electrochemical conversion devices.

In the established FEBID process, an electron beam is used to write structures from molecules adsorbed onto a solid surface that provides support and nucleation sites for deposit growth. The precursors are introduced into the high-vacuum electron microscope chamber in gas phase. High-energy electrons in the beam interact with the substrate to produce the low-energy secondary electrons, which dissociate the adsorbed precursor molecules, resulting in deposition of solid material onto the substrate surface.

Though it enables precise atom-by-atom fabrication of nanostructures, the process is very slow because the low density of adsorbed gas molecules in the vacuum environment limits the amount of material available for fabrication. And structures must be fabricated from the substrate surface up at continually decreasing growth rate and from a limited number of precursor gases available.

Fedorov and his collaborators have dramatically accelerated the process by introducing electrically-charged liquid-phase precursors directly into high vacuum of the electron microscope chamber. Liquid-phase precursors had been demonstrated before, but the materials had to be enclosed in a tiny capsule where the reaction took place, limiting fabrication flexibility, capacity and utility of the approach for 3D nanofabrication.

The solvent containing the desired material ions is introduced into the chamber using a nanoelectrospray system composed of a tiny nozzle just a few microns in diameter. By applying the focused electric field to the nozzle, the fluid jet is drawn and delivers to the substrate forming a precisely controlled thin liquid film.

The electrospray produces nanometer-scale charged droplets from a Taylor cone jet just 100 nanometers in diameter, which coalesce upon impingement and form a thin film of the precursor on the solid substrate.

The research team used the electron beam itself to visualize the Taylor cone jet in the vacuum environment, the first time this has ever demonstrated, as well as to measure the thickness of the liquid film in situ by using a nanoscale “ruler” prefabricated on the deposition substrate. The electron beam then scans over the liquid film following a desired pattern, producing suitable energy electrons which solvate and reduce the cations, writing structures in precise formation from the precursor delivered by the electrified jet. Though evaporation of the solvent does occur, the nanoelectrospray can maintain a stable film long enough for the structures to form.

The combination of a denser precursor, reduction in material surface transfer problems and elimination of the need to break chemical bonds with the electron beam allows fabrication up to five orders of magnitude – a factor of 5,000 – faster than the earlier gas-phase technique.

“By changing the energy of the beam and current, we can preferentially grow nanostructures in 3D at much faster rate,” Fedorov said. “All of a sudden, there are a whole host of different applications that were not possible before.”

Varying the precursor type, film thickness, concentration of ions and the energy and current of the electron beam controls the kinds of structures that can be made, Fedorov said. Structures such as bridges connecting posts become possible because material can be written atop the thin films.

The new process allows considerable flexibility in fabrication, opening the possibility of depositing more than one material simultaneously. That could allow production of alloys and composites, such as combinations of silver and gold. Or, one material could be used as a template to be coated by another material with the simple substitution of precursor materials.

So far, the Georgia Tech team has produced structures of silver and carbon, but the process could be used to fabricate a wide range of metallic and non-metallic nanomaterials. Metals produced using the technique can be highly pure because a carbon-producing precursor dissociation step can be mitigated.

The next step will be to understand the physics and chemistry governing the fabrication process to allow more precise control and to guide others who may wish to use it for their own specific applications.

“We expect that the role of the solvents is going to be very important in the kinds of kinetic pathways that we can control to produce many different kinds of structures with desired chemical make-up,” said Fedorov. “This gives us an opportunity to explore a regime of chemistry and physics that had previously been outside what we could study. We want to establish an understanding of the basic physics and chemistry of the process.”

Future work will include a study of how the interaction of beams with different energies, vacuum environments, solvents and concentrations of ionic species affect the outcome.

“We have demonstrated that we can electrospray liquid precursors inside a high vacuum environment of an electron microscope and then use electrons to facilitate useful chemical transformations,” said Fedorov. “We think this will enable scientists and engineers to make structures they had only been able to dream of before.”

This research was supported by the U.S. Department of Energy, Office of Science, Basic Energy Sciences, under award number DE-SC0010729. The comments contained in this article are the responsibility of the authors and do not necessarily represent the official views of the Department of Energy. 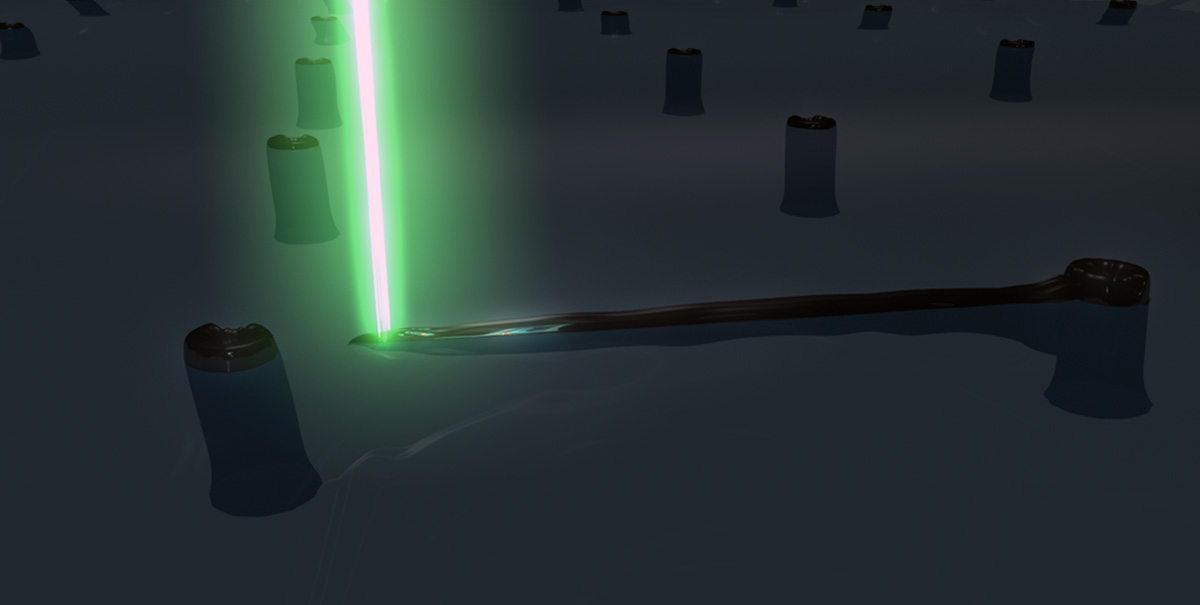 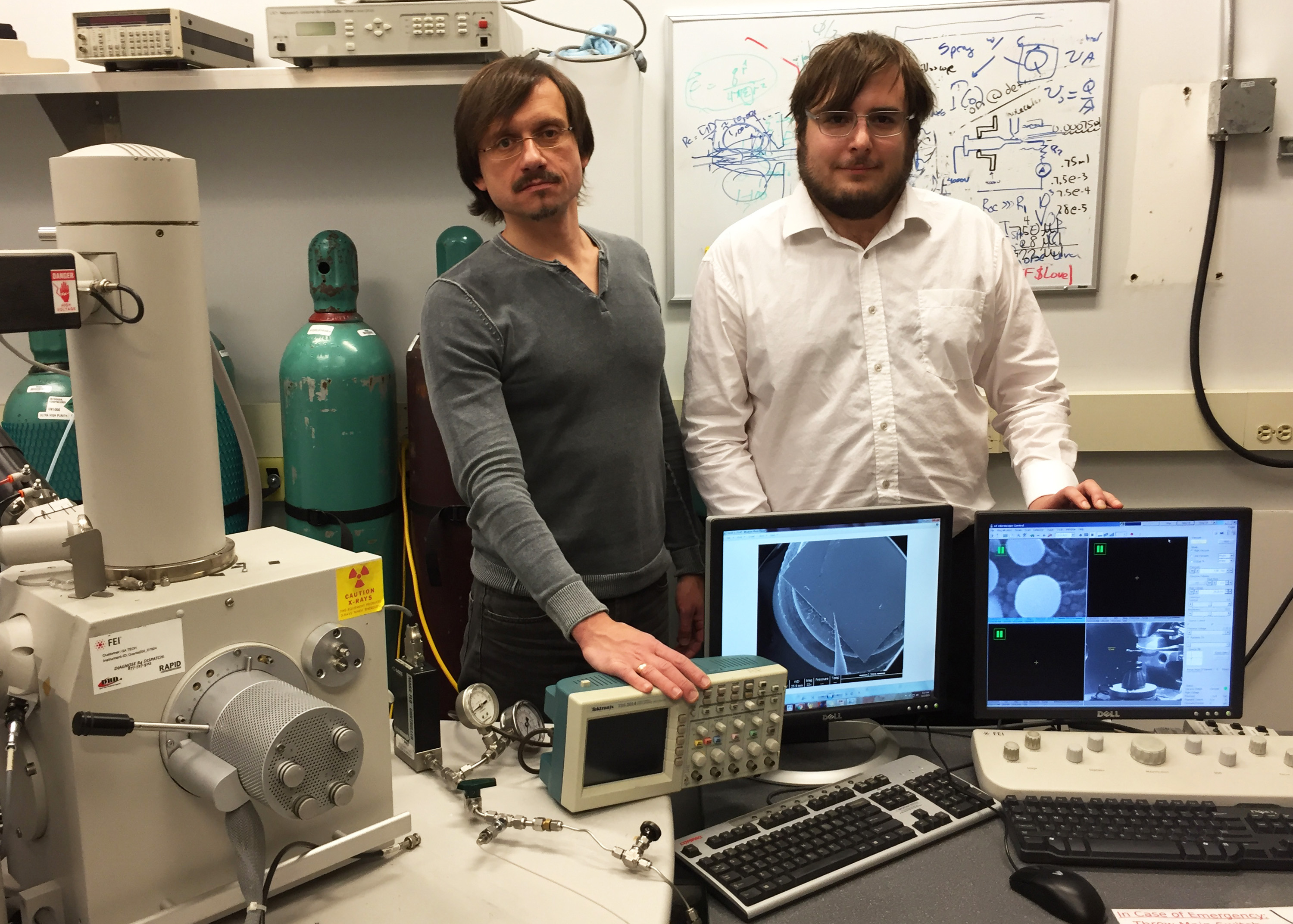 Using nanoelectrospray, researchers have demonstrated a new process for rapidly fabricating complex three-dimensional nanostructures from a variety of materials, including metals. Shown in the laboratory where the work was done are Professor Andrei Fedorov (left) and graduate student Jeffrey Fisher. (Credit: John Toon, Georgia Tech)