Georgia Tech faculty, postdocs and student researchers play a crucial role in the first-ever observation of a gravitational wave.

For the first time, scientists have observed ripples in the fabric of spacetime called gravitational waves, arriving at the earth from a cataclysmic event in the distant universe. This confirms a major prediction of Albert Einstein’s 1915 general theory of relativity and opens an unprecedented new window onto the cosmos.

Gravitational waves carry information about their dramatic origins and about the nature of gravity that cannot otherwise be obtained. Physicists have concluded that the detected gravitational waves were produced during the final fraction of a second of the merger of two black holes to produce a single, more massive spinning black hole. This collision of two black holes had been predicted but never observed.

The gravitational waves were detected on September 14, 2015 at 5:51 a.m. Eastern Daylight Time (9:51 UTC) by both of the twin Laser Interferometer Gravitational-wave Observatory (LIGO) detectors, located in Livingston, Louisiana, and Hanford, Washington, USA. The LIGO Observatories are funded by the National Science Foundation (NSF), and were conceived, built, and are operated by Caltech and MIT. The discovery, accepted for publication in the journal Physical Review Letters, was made by the LIGO Scientific Collaboration (which includes the GEO Collaboration and the Australian Consortium for Interferometric Gravitational Astronomy) and the Virgo Collaboration using data from the two LIGO detectors.

There are 12 Georgia Institute of Technology faculty members, postdoctoral researchers and students in the LIGO Scientific Collaboration. The team is led by Associate Professor Laura Cadonati, who also chairs the LIGO Data Analysis Council. In this role, she coordinates and guides the activities of hundreds of scientists around the world who work together to analyze the data coming out of the LIGO detectors.

“This is a groundbreaking discovery that will open a new field of gravitational wave astronomy where gravitational waves will be a new probe to explore the mysteries of the universe,” said Cadonati, who has been a member of the LIGO Scientific Collaboration for 14 years.

Based on the observed signals, LIGO scientists estimate that the black holes for this event were about 29 and 36 times the mass of the sun, and the event took place 1.3 billion years ago. About three times the mass of the sun was converted into gravitational waves in a fraction of a second ­– with a peak power output about 50 times that of the whole visible universe. By looking at the time of arrival of the signals ­– the detector in Livingston recorded the event seven milliseconds before the detector in Hanford ­– scientists can say that the source was located in the Southern Hemisphere.

The Georgia Tech researchers conducted various analyses over the span of six months toward the confirmation of the first gravitational wave detection. They examined the large amount of data collected by the two detectors and performed investigations to ensure that the observed signal wasn’t due to false noise from the instrument or environment.

Once the signal was extracted from the LIGO data, the Georgia Tech team was able to compare it with hundreds of its simulations of binary black hole mergers. This helped confirm that the signal indeed originated from two black holes, nearly equal in mass, that were spinning on their respective axes as they orbited and collided, forming a single, spinning black hole.

“When we saw the initial signal, we knew something that strong could only be from colliding black holes,” said Shoemaker. “My group and I immediately went to our bank of theoretical predictions and searched for one that looked similar. After many years of computer modeling, we were finally able to compare our expectations with something that nature actually produced.”

In the coming months, as LIGO continues its observing schedule, data will be streamed directly to the PACE computing cluster at Georgia Tech. The team will continue to exploit this new window of the universe with the construction of additional computing facilities and deployment of the LIGO analyses on the Open Science Grid.

The discovery was made possible by the enhanced capabilities of Advanced LIGO, a major upgrade that increases the sensitivity of the instruments compared to the first generation LIGO detectors, enabling a large increase in the volume of the universe probed—and the discovery of gravitational waves during its first observation run. The US National Science Foundation leads in financial support for Advanced LIGO. Funding organizations in Germany (Max Planck Society), the U.K. (Science and Technology Facilities Council, STFC) and Australia (Australian Research Council) also have made significant commitments to the project. Several of the key technologies that made Advanced LIGO so much more sensitive have been developed and tested by the German UK GEO collaboration. Significant computer resources have been contributed by the AEI Hannover Atlas Cluster, the LIGO Laboratory, Syracuse University, and the University of Wisconsin-Milwaukee.  Several universities designed, built, and tested key components for Advanced LIGO: The Australian National University, the University of Adelaide, the University of Florida, Stanford University, Columbia University in the City of New York, and Louisiana State University.

LIGO research is carried out by the LSC, a group of more than 1000 scientists from universities around the United States and in 14 other countries. More than 90 universities and research institutes in the LSC develop detector technology and analyze data; approximately 250 students are strong contributing members of the collaboration. The LSC detector network includes the LIGO interferometers and the GEO600 detector. The GEO team includes scientists at the Max Planck Institute for Gravitational Physics (Albert Einstein Institute, AEI), Leibniz Universität Hannover, along with partners at the University of Glasgow, Cardiff University, the University of Birmingham, other universities in the United Kingdom, and the University of the Balearic Islands in Spain.

Virgo research is carried out by the Virgo Collaboration, consisting of more than  250 physicists and engineers belonging to 19 different European research groups: 6 from Centre National de la Recherche Scientifique (CNRS) in France; 8 from the Istituto Nazionale di Fisica Nucleare (INFN) in Italy; 2 in The Netherlands with Nikhef; the Wigner RCP in Hungary; the POLGRAW group in Poland and the European Gravitational Observatory (EGO), the laboratory hosting the Virgo detector near Pisa in Italy. 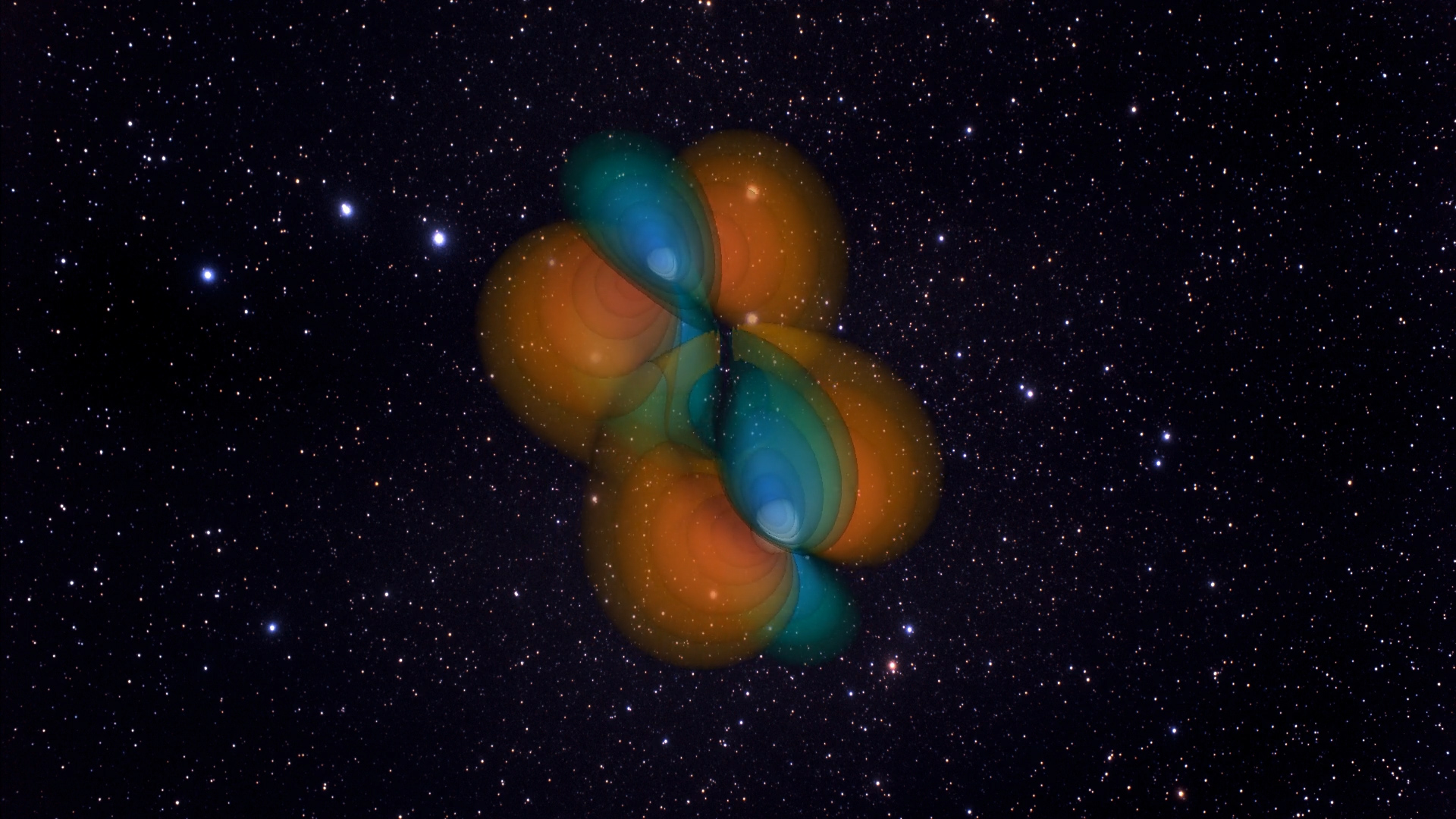 Visualization of the first binary black black hole coalescence discovered, GW150914, which was announced on February 11, 2016. The two black holes are in orbit around each other, getting closer together, losing energy to gravitational waves, seen here as colored contours.The two white spheres are the black holes, colored white for visibility. The image was taken from a binary/simulation that was created by Georgia Tech's team, including Matt Kinsey, Karan Jani and Michael Clark. 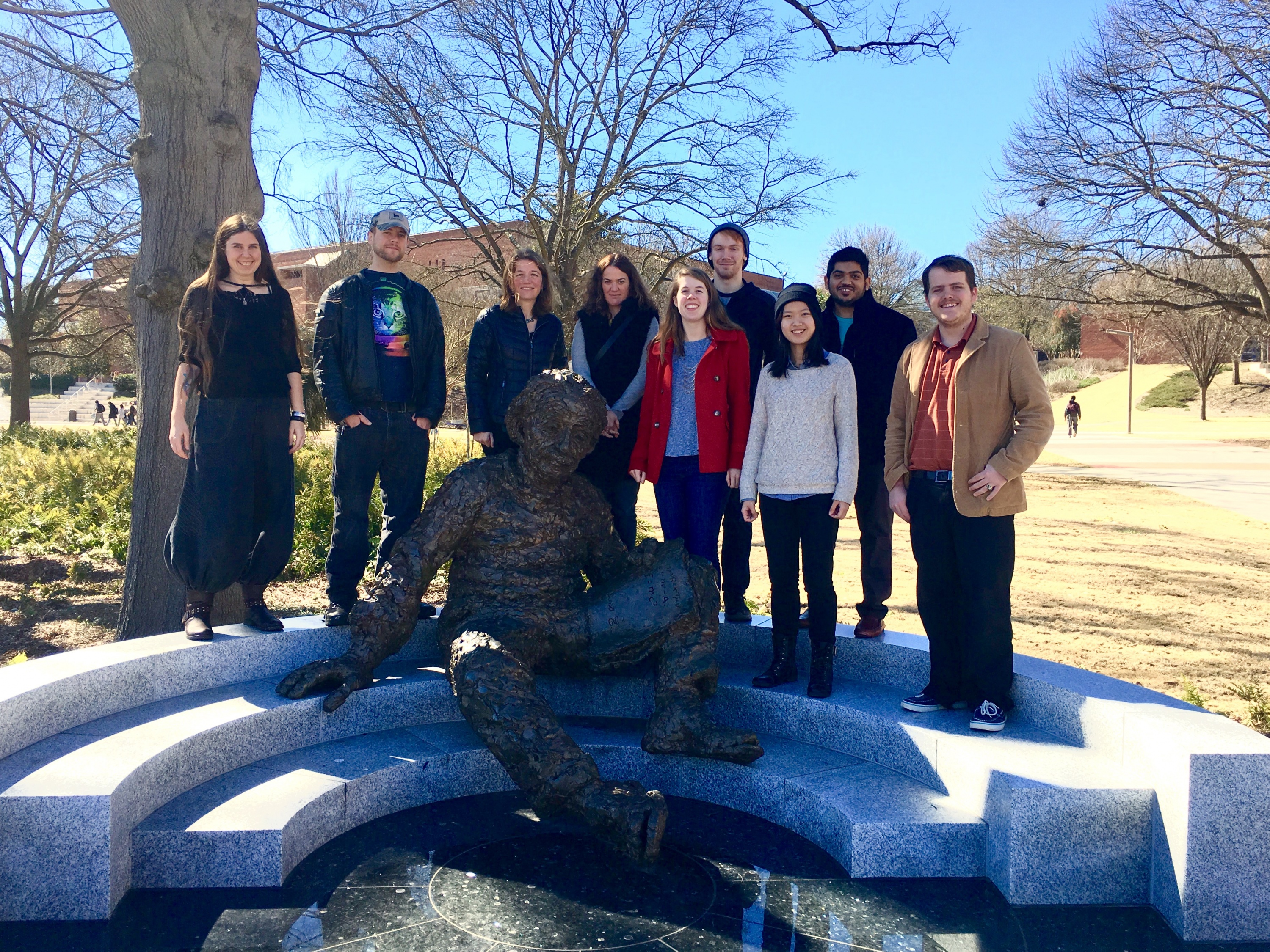 Members of the Georgia Tech LIGO team that played a role in the observation of a gravitational wave.