The Class of 1934 Distinguished Professor Award is Georgia Tech’s highest award given to a faculty member. 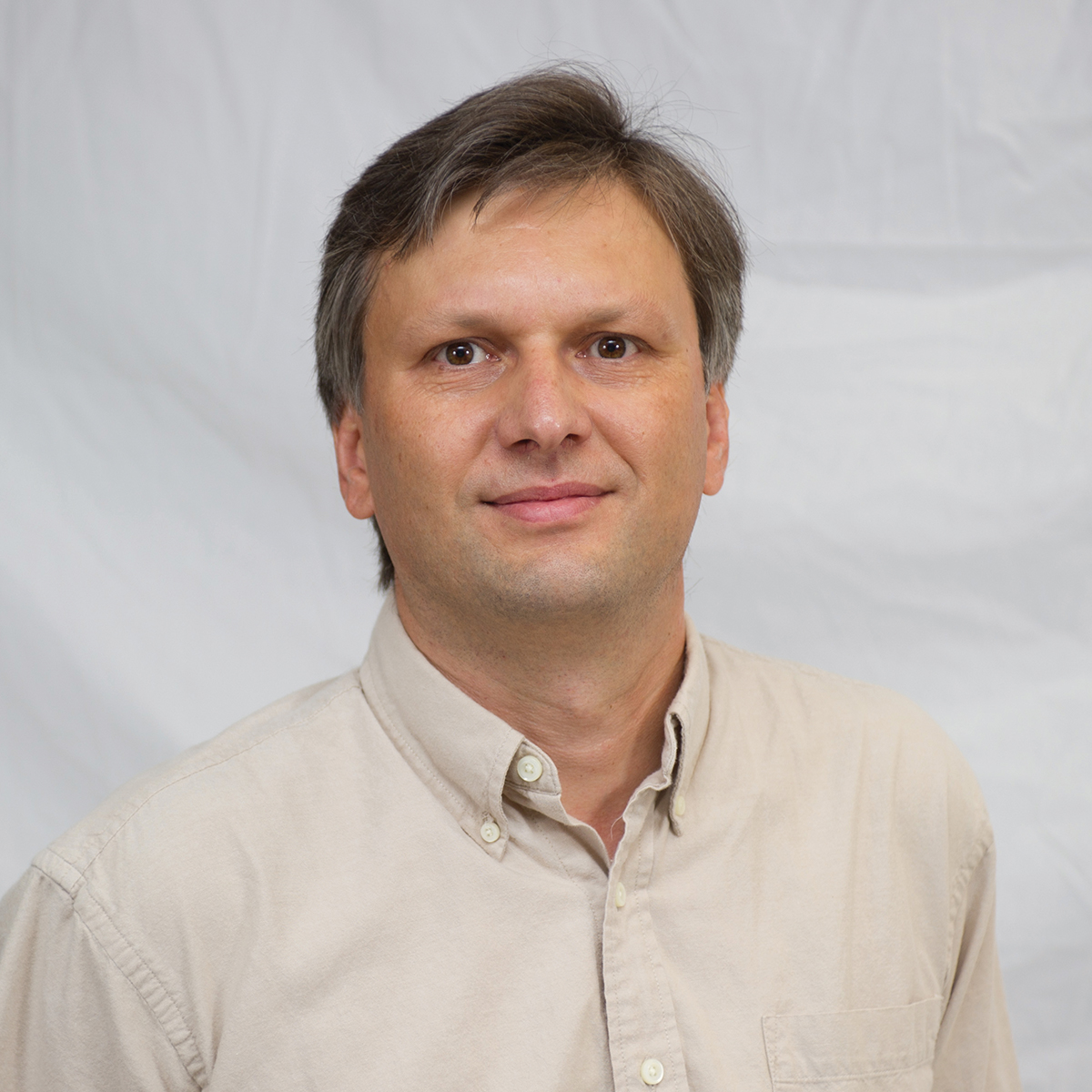 Robin Thomas has a remarkable record of teaching, service, and research. He is a Regents Professor, recipient of the Neuron Award for Lifetime Achievement in Mathematics, and a member of the 2012 inaugural class of American Mathematical Society Fellows. He has more than 100 papers appearing in top journals, and he has been awarded the Fulkerson Prize for outstanding papers in the area of discrete mathematics. Twice. This accomplishment has been matched by only four other researchers in the history of the prize.

Thomas is now the recipient of Georgia Tech’s highest award given to a faculty member: the Class of 1934 Distinguished Professor Award.

“This award is special because it’s from Georgia Tech,” Thomas said. “I’ve been at Georgia Tech for over 25 years, so receiving this award means a lot to me.”

The Class of 1934 Distinguished Professor Award recognizes outstanding achievement in teaching, research, and service. Instituted in 1984 by the Class of 1934 in observance of its 50th reunion, the award is presented to an active professor who has made significant, long-term contributions — contributions that would have brought widespread recognition to the professor, to his or her school, and to the Institute. The award includes a stipend of $20,000.

Letters of support for Thomas’ nomination came from world-renowned senior researchers familiar with the significance of his work, former Ph.D. students who wrote of his record as a teacher and mentor, and former postdoctoral fellows who praised his ability to develop young talent.

Dean of Tech’s College of Sciences Paul Goldbart said, “Robin is a shining star in the international firmament of modern mathematics — a brilliant researcher, inspiring mentor, superb instructor, and treasured colleague. Just today, I had the pleasure of hearing from one of our mathematics graduate students about a glorious contribution of Robin’s to the famous four-color problem of map and graph theory.”

Before coming to Tech in 1989, Thomas worked at Bellcore, a telecommunication research and development company.

“The reason I came here is because Georgia Tech made me an offer I could not refuse,” he said. “I was technically working in industry, but, in reality, I was also doing my own research. So, in that sense, the research part was not that different.”

Thomas’ research in discrete mathematics is concentrated in the fields of graph theory and combinatorics, areas with applications across a wide span, from engineering and computer science to economics, biology, and social science. The issues being researched are often motivated by real-world problems in telephone network design, airline scheduling, online auctions, and Internet design and searching. Many of the problems solved by Thomas and his collaborators were open for several decades and had successfully resisted the best efforts of the world’s leading researchers.

Thomas also is director of Tech’s Algorithms, Combinatorics, and Optimization (ACO) program, an interdisciplinary Ph.D. program linking the College of Computing, the School of Mathematics, and the H. Milton Stewart School of Industrial and Systems Engineering. About half of ACO’s Ph.D. students go into academia and the others go into industry.

Thomas has graduated 16 Ph.D. students at Tech, and he has been an informal advisor to many others.

In receiving the Class of 1934 Distinguished Faculty Award, he joins ACO colleagues Dick Lipton (Computer Science) and George Nemhauser (Industrial and Systems Engineering), who were honored with the award in 2012 and 2015, respectively.

In 2008, Thomas was diagnosed with amyotrophic lateral sclerosis, also known as ALS or Lou Gehrig’s disease. The disease is characterized by stiff muscles, twitching, and a gradual decrease in muscle  strength, resulting in difficulty speaking, swallowing, and eventually breathing.

“It’s a progressive disease, where I’m gradually losing the use of my legs and other functions,” said Thomas, who uses a motorized wheelchair to get around.

“I had to completely change the way I deliver lectures,” said Thomas, who is on faculty development leave this semester, but usually teaches Applied Combinatorics (Math 3012) and Graph Theory (Math 6014). “I can no longer stand in front of a whiteboard. At first, I was writing my lectures on paper and using a document camera to project it onto a screen. But that’s no longer possible.”

Now, Thomas prepares his lectures in advance, which he says is both good and bad.

“It’s good because students get to see the material ahead of time. They can print it and bring it to class. The bad thing is that I have to anticipate the students’ questions. So I design my lectures where I ask the questions for them and then reveal the answers.”

Of course, Thomas cannot anticipate every question. When a student asks a question that he did not expect, he answers it and asks for a student volunteer to write the answer on the white board. He also has a teaching assistant to help him prepare for class.

Although Thomas’ body is failing him, his mind remains sharp and focused.

“There are lots of ongoing research projects that I would like to finish,” he said. “In terms of career moves, I don’t have any aspirations to be a department chair or anything similar. I’m quite happy with running the ACO Program.” 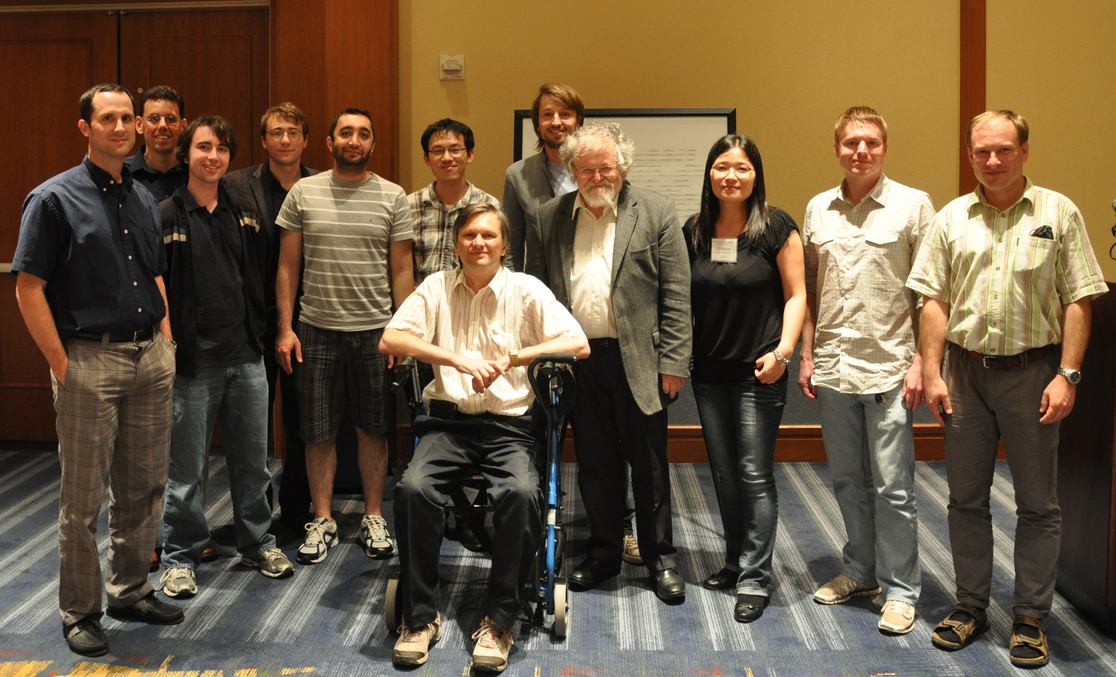 Thomas, center, is pictured with his advisor and some of his former students at a conference held in his honor in 2012. The Conference on Graph Theory took place at Georgia Tech to celebrate Thomas’ work and his 50th birthday.

Thomas, along with many other faculty and staff members, will be honored at Tech’s annual Faculty and Staff Honors Luncheon on Friday, April 22, from noon to 1:30 p.m. in the Student Center Ballroom. The event will recognize those who have received Institute awards and accolades during the past year. The deadline to RSVP is Wednesday, April 13. Departments with eight or more attendees will receive discounted admission. For more information and to RSVP, visit www.c.gatech.edu/FSHL.