Phone calls and text messages reach you wherever you are because your phone has a unique identifying number that sets you apart from everybody else on the network. Researchers at the Georgia Institute of Technology are using a similar principle to track cells being sorted on microfluidic chips.

The technique uses a simple circuit pattern with just three electrodes to assign a unique seven-bit digital identification number to each cell passing through the channels on the microfluidic chip. The new technique also captures information about the sizes of the cells, and how fast they are moving. That identification and information could allow automated counting and analysis of the cells being sorted.

The research, reported in the journal Lab on a Chip, could provide the electronic intelligence that might one day allow inexpensive labs on a chip to conduct sophisticated medical testing outside the confines of hospitals and clinics. The technology can track cells with better than 90 percent accuracy in a four-channel chip.

“We are digitizing information about the sorting done on a microfluidic chip,” explained Fatih Sarioglu, an assistant professor in Georgia Tech’s School of Electrical and Computer Engineering. “By combining microfluidics, electronics and telecommunications principles, we believe this will help address a significant challenge on the output side of lab-on-a-chip technology.”

Microfluidic chips use the unique biophysical or biochemical properties of cells and viruses to separate them. For instance, antigens can be used to select bacteria or cancer cells and route them into separate channels. But to obtain information about the results of the sorting, those cells must now be counted using optical methods.

This impedance change has been used for many years to detect the presence of cells in a fluid, and is the basis for the Coulter Counter which allowed blood counts to be done quickly and reliably. But the microfluidic CODES technique goes beyond counting.

The positive and negative charges from the intermingled electrical circuits create a unique identifying digital signal as each cell passes by, and that sequence of ones and zeroes is attached to information about the impedance change. The unique identifying signals from multiple cells can be separated and read by a computer, allowing scientists to track not only the properties of the cells, but also how many cells have passed through each channel.

“By judiciously aligning the grid pattern, we can generate the codes at the locations we choose when the cells pass by,” Sarioglu explained. “By measuring the current conduction in the whole system, we can identify when a cell passes by each location.”

Because the cells sorted into each channel of a microfluidic chip have certain characteristics in common, the technique would allow the automated detection of cancer cells, bacteria or even viruses in a fluid sample. Sarioglu and his students have demonstrated that they can track more than a thousand ovarian cancer cells with an accuracy rate of better than 90 percent.

The underlying principle for the cell identification is called code division multiple access (CDMA), and it’s essential for helping cellular networks separate the signals from each user. The microfluidic channels are fabricated from a plastic material using soft lithographic techniques. The electrical pattern is fabricated separately on a glass substrate, then aligned with the plastic chip

“We have created an electronic sensor without any active components,” Sarioglu said. “It’s just a layer of metal, cleverly patterned. The cells and the metallic layer work together to generate digital signals in the same way that cellular telephone networks keep track of each caller’s identity. We are creating the equivalent of a cellphone network on a microfluidic chip.”

The next step in the research will be to combine the electronic sensor with a microfluidic chip able to actively sort cells. Beyond cancer cells, bacteria and viruses, such a system could also sort and analyze inorganic particles.

The computing requirements of the system would be minimal, requiring no more than the processor power of smartphones that already handle decoding of CDMA signals. The proof-of-principle device contains just four channels, but Sarioglu believes the design could easily be scaled up to include many more channels.

“This is like putting a USB port on a microfluidic chip,” he explained. “Our technique could turn all of the microfluidic manipulations that are happening on the chip into quantitative data related to diagnostic measurements.

Ultimately, the researchers hope to create inexpensive chips that could be used for sophisticated diagnostic testing in physician offices or remote locations. Chips might be contained on cartridges that would automate the testing process.

“It will be very exciting to scale this up, and I think that will open up the possibility for many different assays to become accessible electronically,” Sarioglu said. “Decentralizing health care is an important trend, and our technology might one day allow many kinds of diagnostic tests to be done beyond hospitals and large medical facilities.” 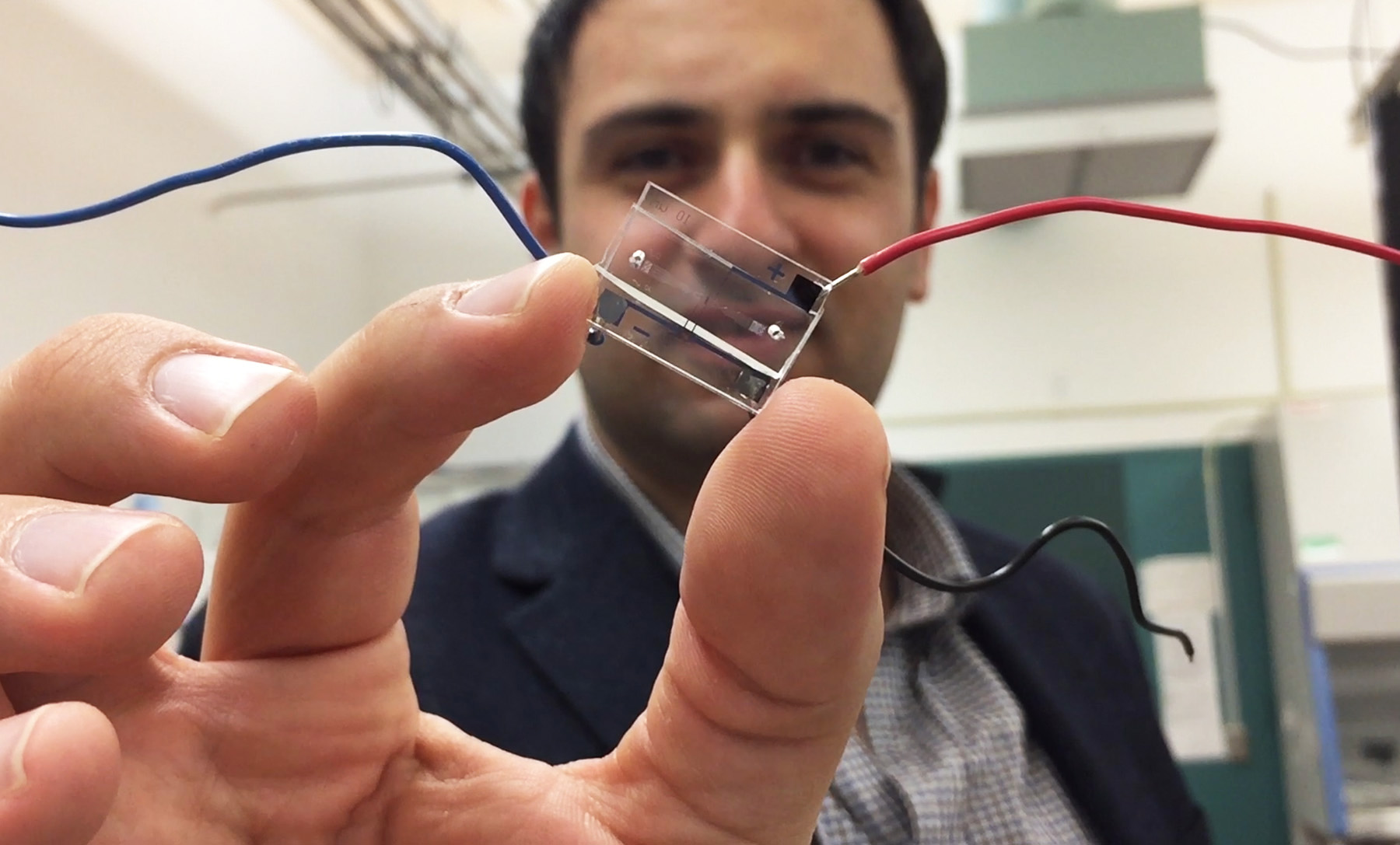 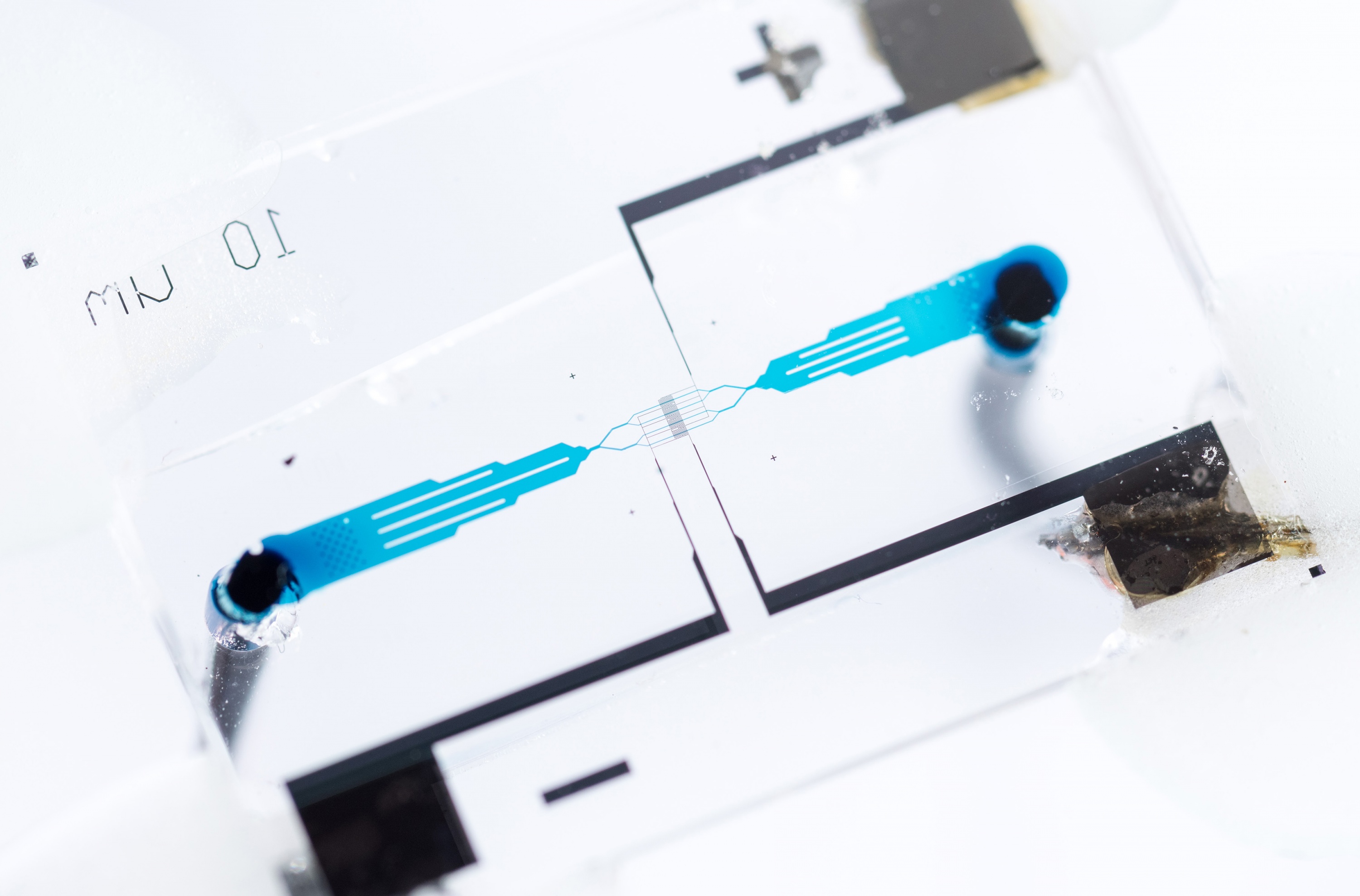 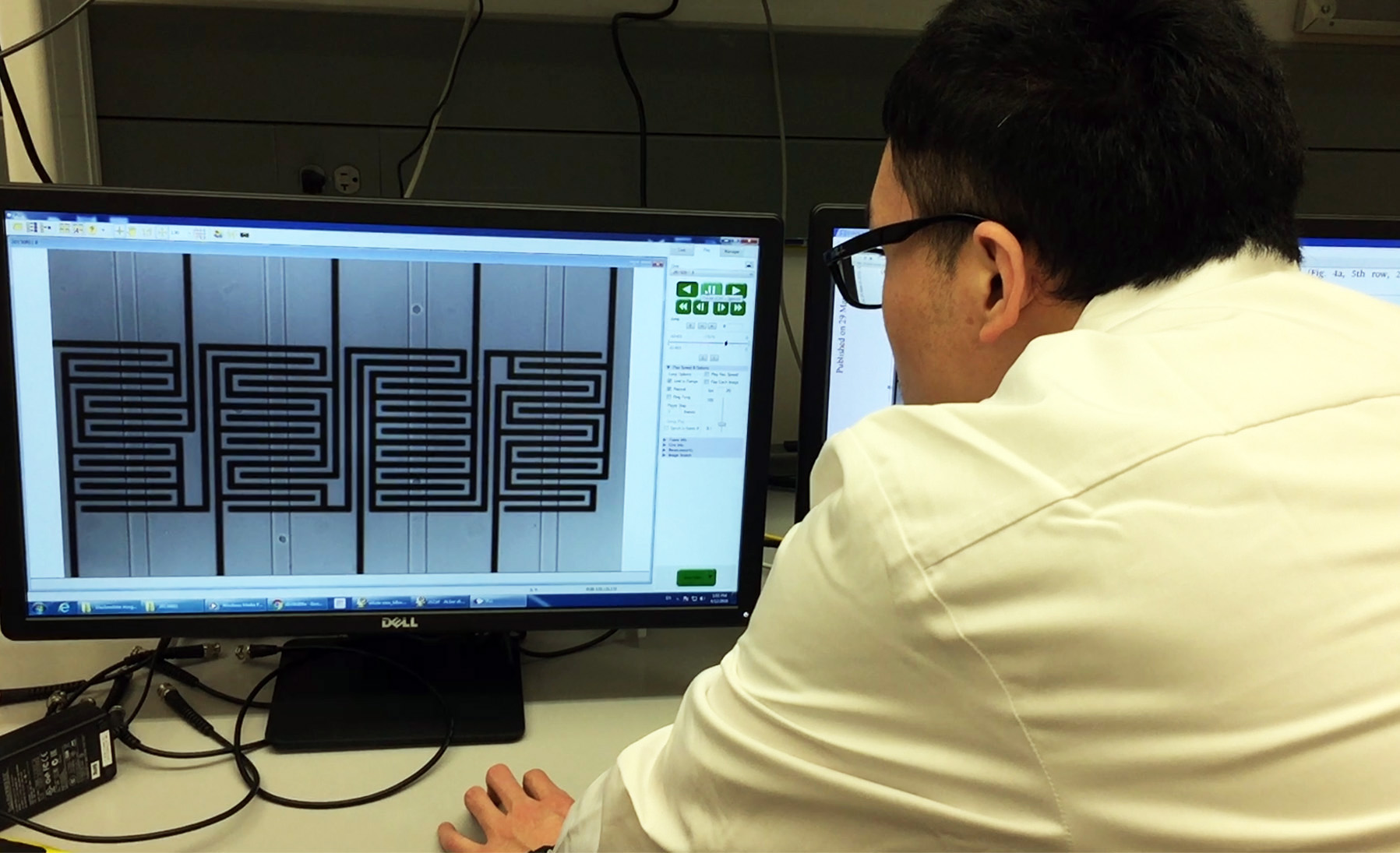 A researcher in the laboratory of Fatih Sarioglu watches ovarian cancer cells move through a hybrid microfluidic chip. The microfluidic channels are vertical; the circuit pattern is shown behind them. (Credit: John Toon, Georgia Tech) 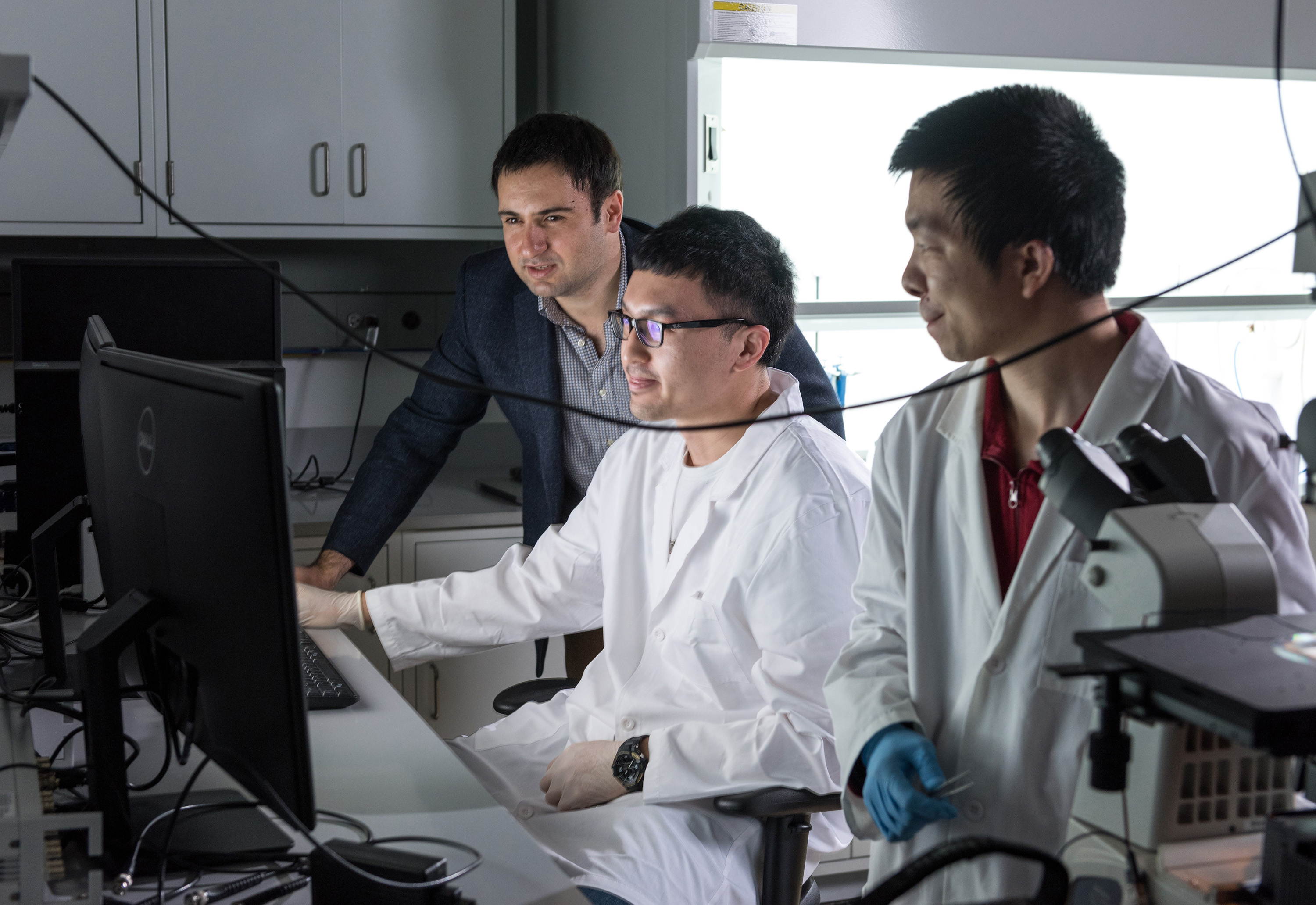 Georgia Tech researchers have developed a hybrid microfluidic chip that could provide the electronic intelligence that might one day allow inexpensive labs on a chip to conduct sophisticated medical testing outside the confines of hospitals and clinics. Shown are (l-r) Fatih Sarioglu, Ningquan Wang and Ruxiu Liu. (Credit: Rob Felt, Georgia Tech)