Savannah-based medical device startup has a developed an all-in-one, hand-held X-ray and digital camera for surgeons. 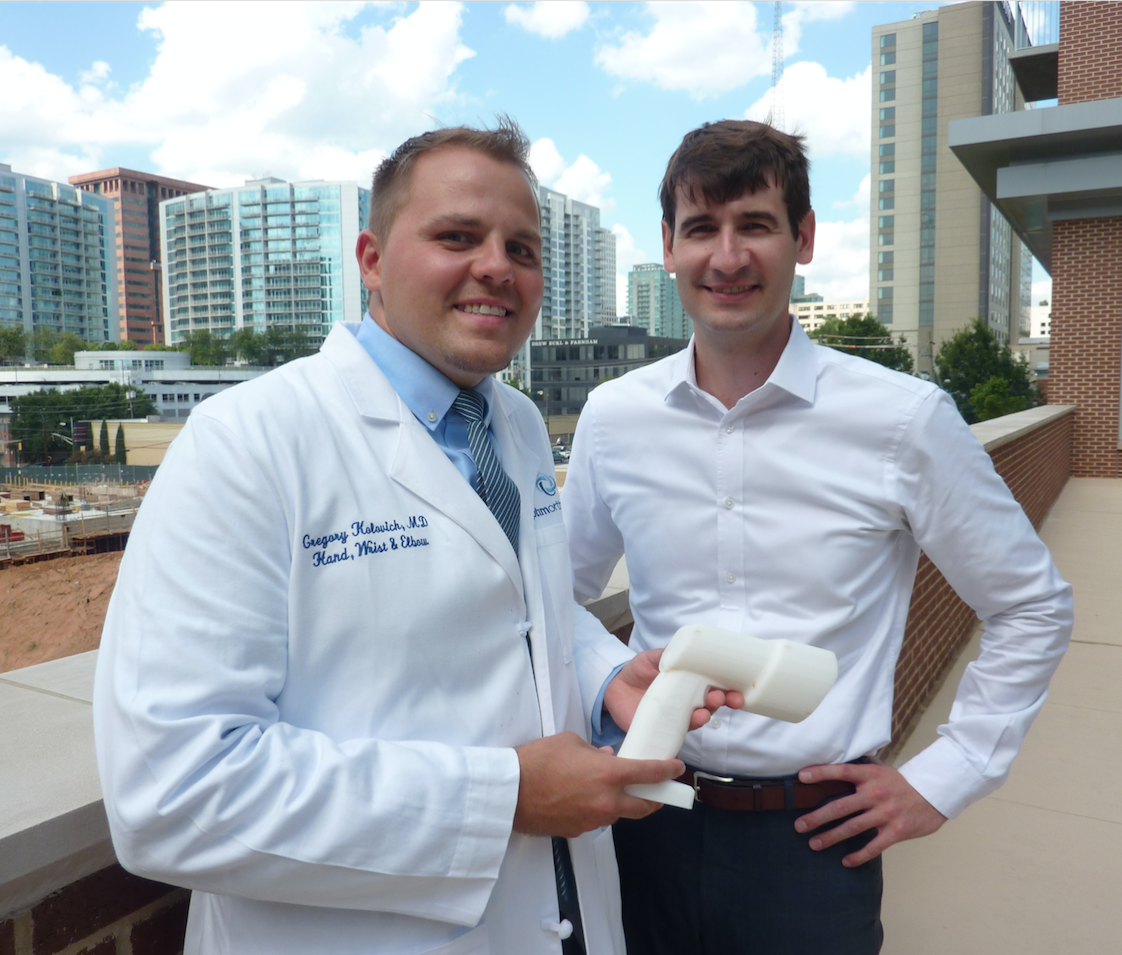 Dr. Greg Kolovich, an orthopedic hand and micro-surgeon (left), stands with business partner Evan Ruff. Kolovich is the founder of Micro C, a Savannah-based company that developed an all-in-one, hand-held X-ray and digital camera for surgeons and physicians treating disorders of the extremities. Ruff is CEO and a third partner,  Kirby Sisk, is chief operating officer. Kolovich, Ruff, and Sisk are all graduates of Georgia Tech. (Photo credit: Péralte C. Paul)

Micro C, a Savannah-based medical device startup founded by a Georgia Tech graduate, said it successfully raised $260,000 in its early-seed funding round.

ATDC, an initiative of Georgia Tech that operates programs in Savannah, Augusta, and Athens, is the state’s technology incubator. It is one of the longest-running and largest university-affiliated business incubators in the country.

The funds will be put toward prototyping expenses and early marketing initiatives of the wireless device, said Dr. Greg Kolovich, an orthopedic hand and micro-surgeon and company founder.

“This is a novel approach as we currently do not have a hand-held fluoroscopy device in orthopedic surgery or any kind of surgery outside of dental,” said Kolovich, who earned his electrical engineering degree from Georgia Tech, medical degree from Ohio State, and surgical training at Harvard. “This is a bridge between the large C-arms we use in the operating room and smaller ones used by dentists to take X-rays of teeth.”

The standard C-arm, first launched in 1955, is a medical imaging device. While the technology has advanced and improved since then, Kolovich said there is a great need for a light hand-held device, particularly when dealing with surgeries of the hand and foot.

Under standard practice with existing C-arms, when the surgeon needs to take an X-ray, they and their medical teams have to stop what they’re doing to take the images.

“The innovation is the application of it for intra-operative imaging without having to go ahead and stop what you’re doing,” said Evan Ruff, CEO of Micro C and a graduate of Tech with a degree in computer engineering. “So this can be used while you’re performing the surgery.”

In addition to Ruff and Kolovich, Kirby Sisk, who serves as chief operating officer, also earned a degree in mechanical engineering from Tech.

“The reason I came up with the idea, I was reattaching a severed hand with the help of an intern. It was cumbersome and time-consuming to manipulate the C-arm, while you’re trying to position a plate on an unstable wrist and confirm that with an X-ray,” Kolovich said. “So I thought it be awesome if I could freely move the X-ray to the hand by separating the X-ray emitter from the sensor, to give me and other surgeons that extra degree of freedom.”

What’s more, he sought to create a device that would reduce the amount of unnecessary radiation exposure to both the patient and medical professionals. Because of prolonged exposure to radiation, some doctors are prone to developing cataracts or are at risk for certain kinds of cancers. The company’s device emits 100 times less radiation than current C-arms.

It also takes video and high-resolution, digital images in both natural and infrared wavelengths.

“We created a really cool way of making X-rays in the operating room safer,” Kolovich said, explaining the device is expected to cost between $30,000 and $50,000, as compared with standard C-arms, which can cost three times that amount.

That cost difference could help not only rural doctors in the United States who can’t afford traditional C-arms, but also medical professionals in developing countries, the executives said. Additionally, specialists in other fields, including athletic trainers, the military, and veterinarians, could use the technology, Kolovich said. 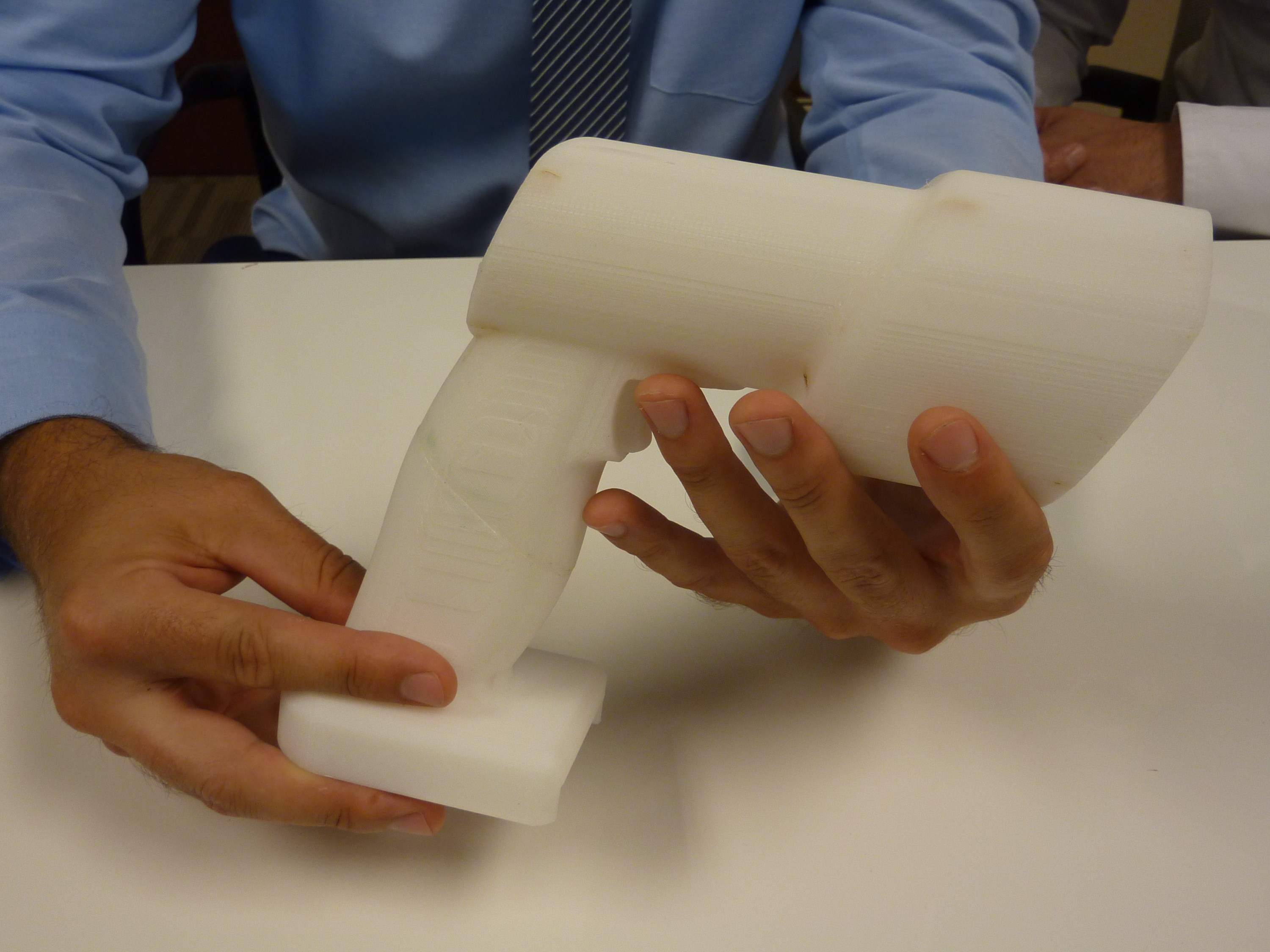 Dr. Greg Kolovich, an orthopedic hand and micro-surgeon and founder of Savannah-based Micro C, holds a prototpye design of the hand-held X-ray and digital camera he created for surgeons and physicians treating disorders of the extremities. “This is a novel approach as we currently do not have a hand-held fluoroscopy device in orthopedic surgery or any kind of surgery outside of dental,” Kolovich said. (Photo credit: Péralte C. Paul)