The first spacecraft built at Georgia Tech is expected to fly this summer.

They clapped when it cleared the launch pad. They oohed in awe as the booster rockets separated, then roared when the pair landed in synchronicity.

And they howled with laughter when they saw a car in space.

“It was awesome! It was unbelievable to see something so historic,” said Swapnil Pujari.

He was one of 30 or so Georgia Tech aerospace engineering students who crowded into a lab in the Engineering Science and Mechanics Building Tuesday afternoon to watch a livestream of SpaceX’s first test flight of the world’s most powerful rocket — the Falcon Heavy.

From the sound in the room, the launch was an unquestionable success.

“I got goosebumps when I saw the two boosters land at the same time,” said William Jun, a fourth-year undergraduate in the Daniel Guggenheim School of Aerospace Engineering. “I feel like I’ve witnessed the beginning of a new era.”

It’s hard to imagine what he’ll feel the next time the Falcon Heavy launches.

Tuesday’s launch only carried one piece of cargo, a red Tesla Roadster that is expected to orbit the sun for the next billion years. The next Heavy rocket will be stuffed with satellites. One of them is scheduled to be Prox-1, a 154-pound, rectangular-shaped metal box that was built and tested by Jun, Pujari and other Georgia Tech students. It’s the first spacecraft built on campus that will fly in space.

“This is the part of the space industry that we live for,” said Professor Glenn Lightsey, who watched the launch with the students. “Ultimately, there is a day when you find out if the thing you’ve thought about and planned for actually works or not. Today (Tuesday) it happened for SpaceX. Six months from now, it will happen for us at Georgia Tech.”

Prox-1 is a 24” by 22” by 12” satellite that will deploy a smaller spacecraft, LightSail 2, which will attempt the first controlled solar sail flight in Earth orbit.

As that sail unfurls, Prox-1 will move and observe LightSail from a short distance and acquire images of the glimmering structure in action. Georgia Tech will serve as mission control.

“Our students are going to have their hardware in space, making measurements and sending their data back to Earth,” said Lightsey. “This is a really unique experience that wasn’t even possible before this century. It’s a new way of doing things in STEM (science, technology, engineering and mathematics) education.”

Prox-1 is currently at the Air Force Research Lab in New Mexico, undergoing a series of tests to make sure the satellite can withstand the rugged, violent ride inside the Falcon Heavy. It’s one of the final pre-flight steps for a six-year project that has included more than 400 Georgia Tech students. From there it will be shipped to Florida and await an official launch date from SpaceX.

Although they enjoyed the experience together for Tuesday’s launch, don’t expect many of the same students to gather on campus to watch Prox-1 blast into space.

“Oh, I will be in Florida for sure!” said Pujari. 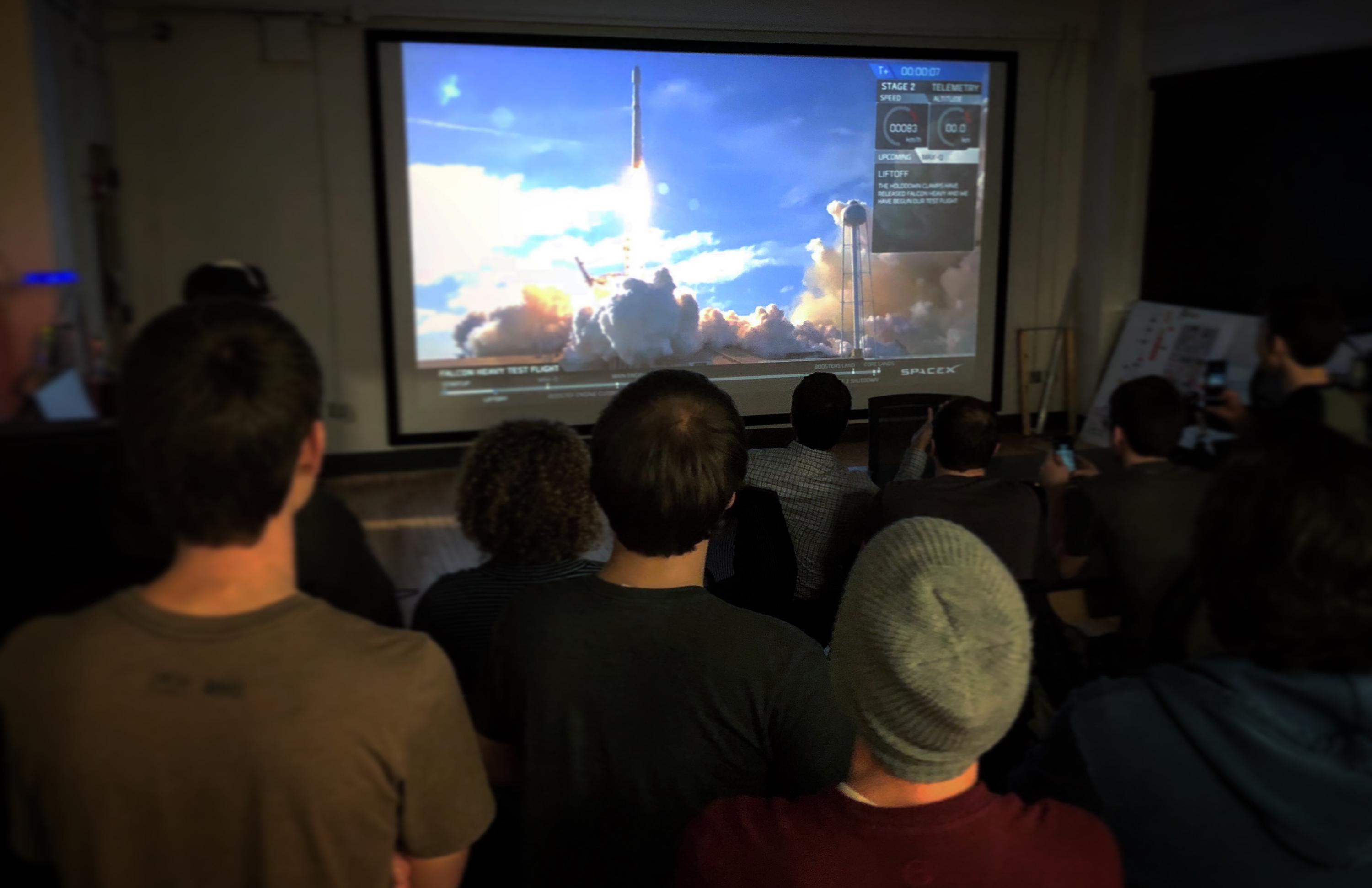 A livestream of the Falcon Heavy launch is projected on a wall-to-wall, floor-to-ceiling screen in the Engineering, Science and Mechanics Building on February 6. 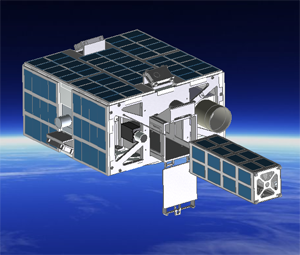 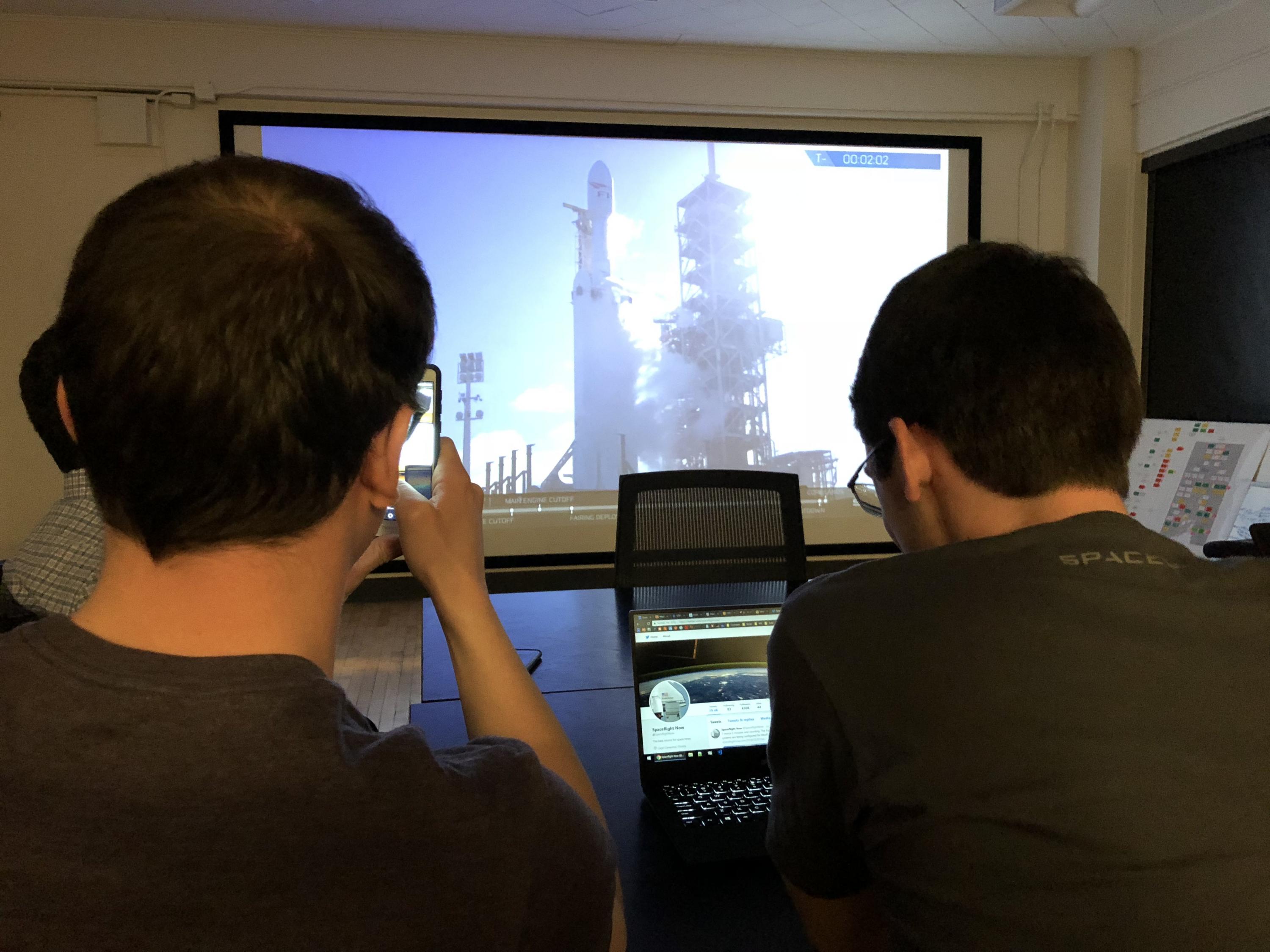 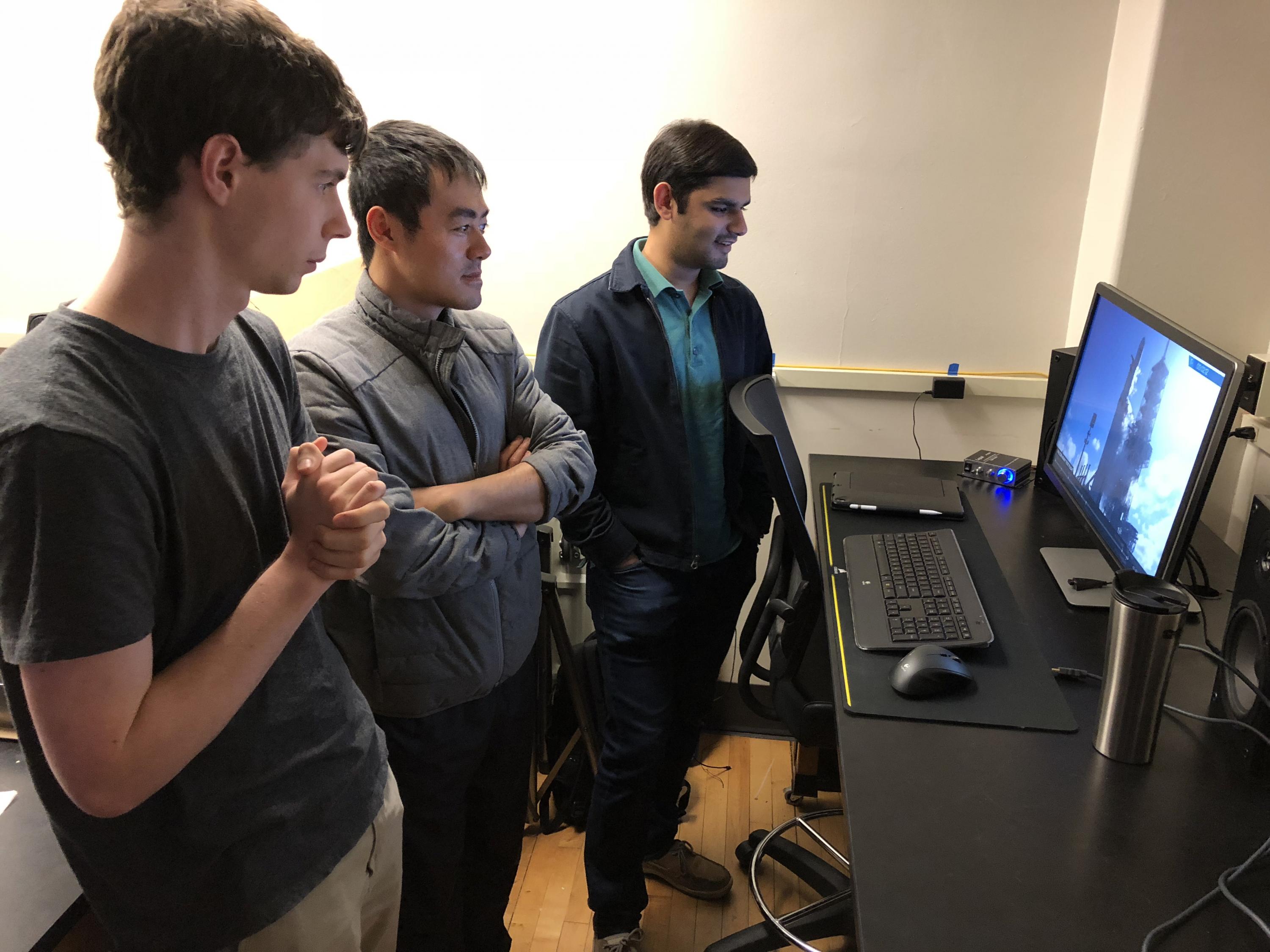 Nearly 30 students gathered to watch the Falcon Heavy launch on February 6. The rocket's next mission will include a Georgia Tech satellite.

Prox-1 is, a 154-pound metal satellite that was built by Georgia Tech students and will fly on the next Falcon Heavy rocket (expected summer of 2018).