In his talk, titled “Ethical Lessons in My Leadership Journey,” Provost Bras shared the personal leadership journey that led him to Georgia Tech. 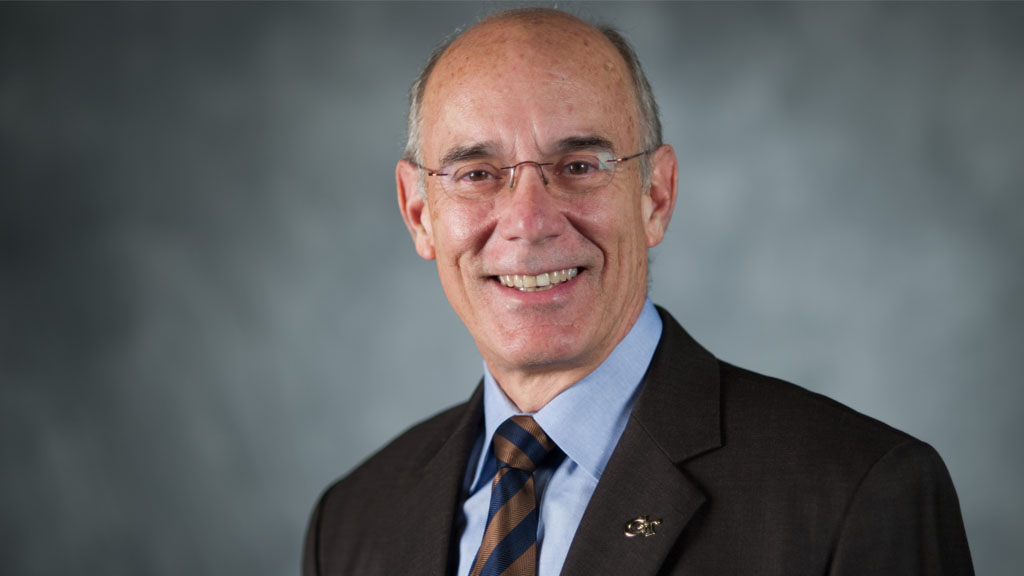 Reflecting on an episode that happened when he was four years old, Provost Rafael L. Bras described feeling jealous, angry, and vengeful when his cousin received a brand new baseball glove — a gift he had wanted for himself.

“I was upset, so I did everything possible to make him as unhappy as I was,” Bras said.

He shared this memory as part of the Scheller College of Business Cecil B. Day Program for Business Ethics Speaker Series. In the talk, titled “Ethical Lessons in My Leadership Journey,” Bras shared the personal leadership journey that led him to Georgia Tech.

He asked, “Were my actions against my cousin my first ethical failure?”

He reasoned they were not because, at four, he lacked an established moral code and a clearly defined set of ethical values. But, he noted, ethical questions are rarely simple for adults, because ethics are context-specific, subjective, and can change over time.

Bras took the attendees through his own personal career trajectory, outlining lessons learned along the way, including those he gained during his first leadership role at the age of 32 at a research laboratory. That experience helped shape the leadership views he still holds today. Following in the footsteps of two directors he admired and loved, a young, recently tenured Associate Professor Bras became just the third director in the lab’s 50-year history.

“Having spent the seven years of my bachelor’s, master’s, and doctoral degrees there, that lab was home to me,” he said. “To this day, it continues to be the only job I had my sights on doing. My predecessors were absolute giants in the field and I wanted to be just like them.”

It wasn’t easy. “No one prepared me to lead at that level,” he said. “I was not prepared for the myriad of issues, both ethical and behavioral, that came my way. I had to make difficult decisions, but the experience taught me that we all make mistakes and most of the time, the solution can be found in shared trust and conversation.”

Advancing leadership roles — and their challenges — would follow over the next several decades, from department head of Civil and Environmental Engineering and chair of the faculty at MIT, to distinguished professor and dean of the Henry Samueli School of Engineering at UC-Irvine, and today, as provost at Georgia Tech.

At every stage of his career, Bras explained, he was committed to emulating the characteristics of the leaders he most admired: conviction, vision, service, empathy, self-awareness, the ability to handle ambiguity, and honesty, among others.

A question-and-answer session followed the remarks. When asked about a tried-and-true method or process for ethical decision making, Bras said, “My first action is to resist a quick response and try to put myself inside the head and thinking of the other person. Absolute objectivity is nonexistent and these situations are always full of ambiguity. I always want to trust first.”

He also cautioned about the dangers of leadership in isolation and shared the value of having close advisors, people who feel comfortable disagreeing with leadership.

“I surround myself with trusted advisors and consult them as often as I can,” Bras said. “The biggest insurance against ethical problems is to surround yourself with good people who are trustworthy, and who are willing to offer differing opinions and vantage points. With that input, I can ask myself, ‘What am I missing? What else is there to understand about this situation?’”

He added, “If those conversations can’t and don’t happen, a leader can begin to believe he or she is the owner of the truth and alone knows best. That is a situation fraught with ethical danger.”

Bras concluded the talk with a few remarks about the current climate at Georgia Tech.

“Georgia Tech is not perfect. The unacceptable and avoidable incidents from last summer have taken a toll on the spirit of the institution, and it’s unfortunate that they distract from the fact that Georgia Tech is doing very, very well,” he said. “Tough decisions were made. Now, we must move forward and rebuild the trust that is necessary to carry on as the institution we want to be.”

The Cecil B. Day Program in Business Ethics Speaker Series brings professionals and academics to talk about specific ethical issues in business and the ethical challenges they have met in their own careers. These sessions are open to the entire Georgia Tech community.