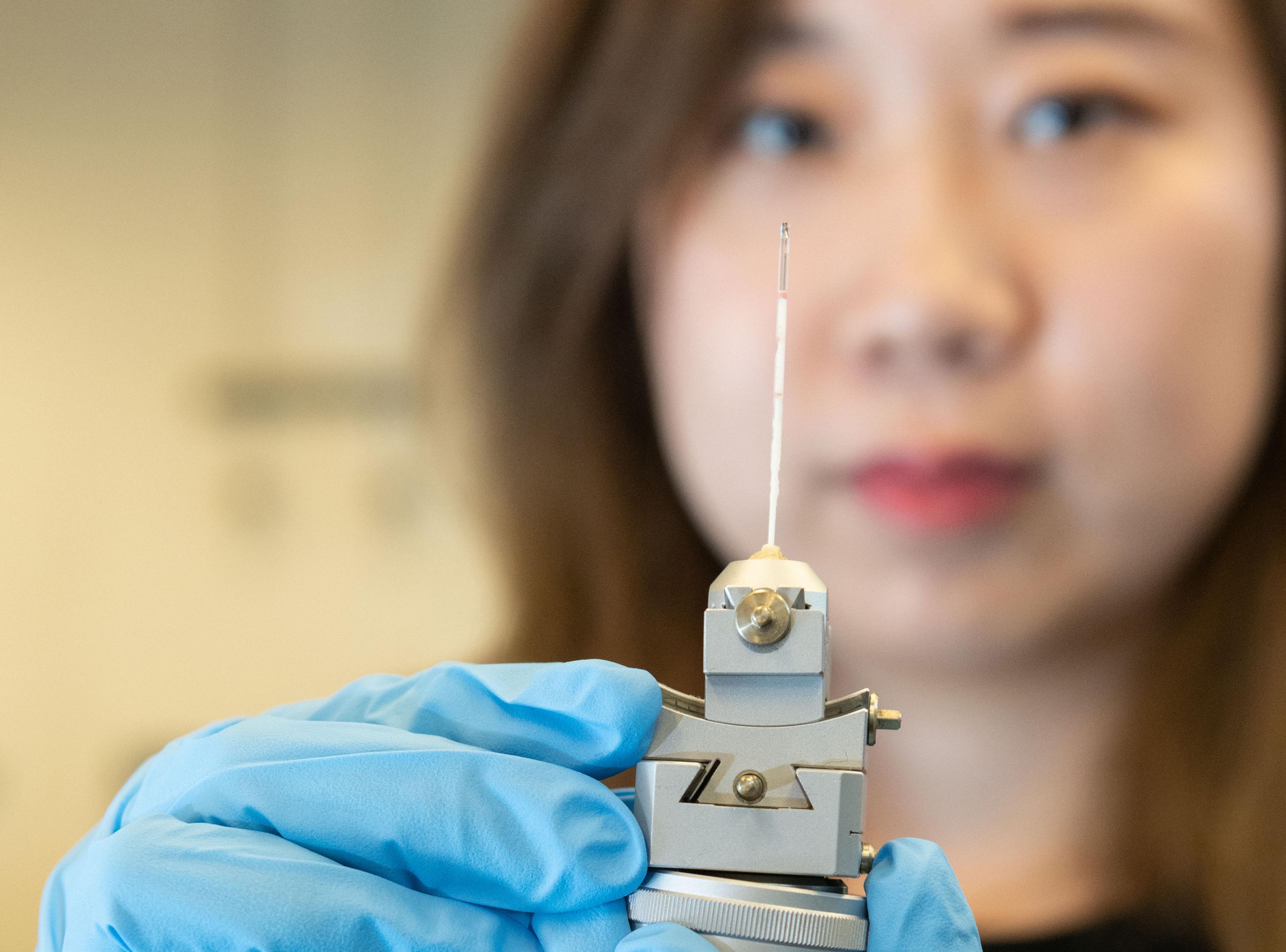 Georgia Tech graduate research assistant Xuetian Ma holds a reaction vessel similar to those used in the research on nanoscale crystalline growth. The vessels were made of a high-strength quartz tube about a millimeter in diameter and about two inches long. (Credit: Allison Carter, Georgia Tech)

High-energy X-ray beams and a clever experimental setup allowed researchers to watch a high-pressure, high-temperature chemical reaction to determine for the first time what controls formation of two different nanoscale crystalline structures in the metal cobalt. The technique allowed continuous study of cobalt nanoparticles as they grew from clusters including tens of atoms to crystals as large as five nanometers.

The research provides the proof-of-principle for a new technique to study crystal formation in real-time, with potential applications for other materials, including alloys and oxides. Data from the study produced “nanometric phase diagrams” showing the conditions that control the structure of cobalt nanocrystals as they form.

The research, reported November 13 in the Journal of the American Chemical Society, was sponsored by the National Science Foundation, and used U.S. Department of Energy-supported synchrotron X-ray beam lines at Brookhaven National Laboratory and Argonne National Laboratory.

“We found that we could indeed control formation of the two different crystalline structures, and that the tuning factor was the pH of the solution,” said Hailong Chen, an assistant professor in the George W. Woodruff School of Mechanical Engineering at the Georgia Institute of Technology. “Tuning the crystalline structure allowed us to control the functionality and properties of these materials. We believe this methodology could also be applied to alloys and oxides.”

In bulk cobalt, crystal formation favors the hexagonal close-pack (HCP) structure because it minimizes energy to create a stable structure. At the nanoscale, however, cobalt also forms the face-centered cubic (FCC) phase, which has a higher energy. That can be stable because the high surface energy of small nanoclusters affects the total crystalline energy, Chen said.

Working with researchers from the two national laboratories and the Department of Materials Science at the University of Maryland, Chen and graduate research assistant Xuetian Ma examined the polymorphic structures using theoretical, experimental and computational modeling techniques.

Experimentally, the researchers reduced cobalt hydroxide in a solution of ethylene glycol, using potassium hydroxide to vary the pH of the solution. The reaction takes place under high pressure – about 1,800 pounds per square inch – and at more than 200 degrees Celsius.

In the laboratory, the researchers use a heavy steel containment vessel that allowed them to analyze only the reaction results. To follow how the reaction took place, they needed to observe it in real time, which required development of a containment vessel small enough to allow for X-ray transmission while handling the high pressure and high temperature at the same time.

The result was a reaction vessel made of a high-strength quartz tube about a millimeter in diameter and about two inches long. After the cobalt hydroxide solution was added, the tube was spun to both facilitate the chemical reaction and average the X-ray signal. A small heater applied the necessary thermal energy and a thermocouple measured the temperature.

Ma and Chen used the setup during four separate trips to beam lines at the National Synchrotron Light Source II at Brookhaven, and the Advanced Photon Source at Argonne National Laboratory. X-rays passing through the reaction chamber to a two-dimensional detector provided continuous monitoring of the chemical reaction, which took about two hours to complete.

“When they started forming a detectable spectrum we captured the X-ray diffraction spectrum and continued to observe it until the crystal cobalt formed,” Ma explained. “We were able to observe step-by-step what was happening from initial nucleation to the end of the reaction.”

Data obtained by varying the pH of the reaction produced a nanometric phase diagram showing where different combinations produced the two structures.

The X-ray diffraction results confirmed the theoretical predictions and computational modeling done by Yifei Mo, an assistant professor in the A. James Clark School of Engineering at the University of Maryland. Mo and colleagues Adelaide Nolan and Shuo Zhang used density functional theory to describe how the crystal would nucleate under differing conditions.

The success with cobalt suggests the methodology could be used to produce nanometric phase diagrams for other materials, including more complex alloys and oxides, Chen said.

“Our goal was to build a model and a systematic understanding about the formation of crystalline materials at the nanoscale,” he said. “Until now, researchers had been relying on empirical design to control growth of the materials. Now we can offer a theoretical model that would allow systematic prediction of what kinds of properties are possible under different conditions.”

As a next step, the Georgia Tech researchers plan to study alloys, to further improve the theoretical model and experimental approach. 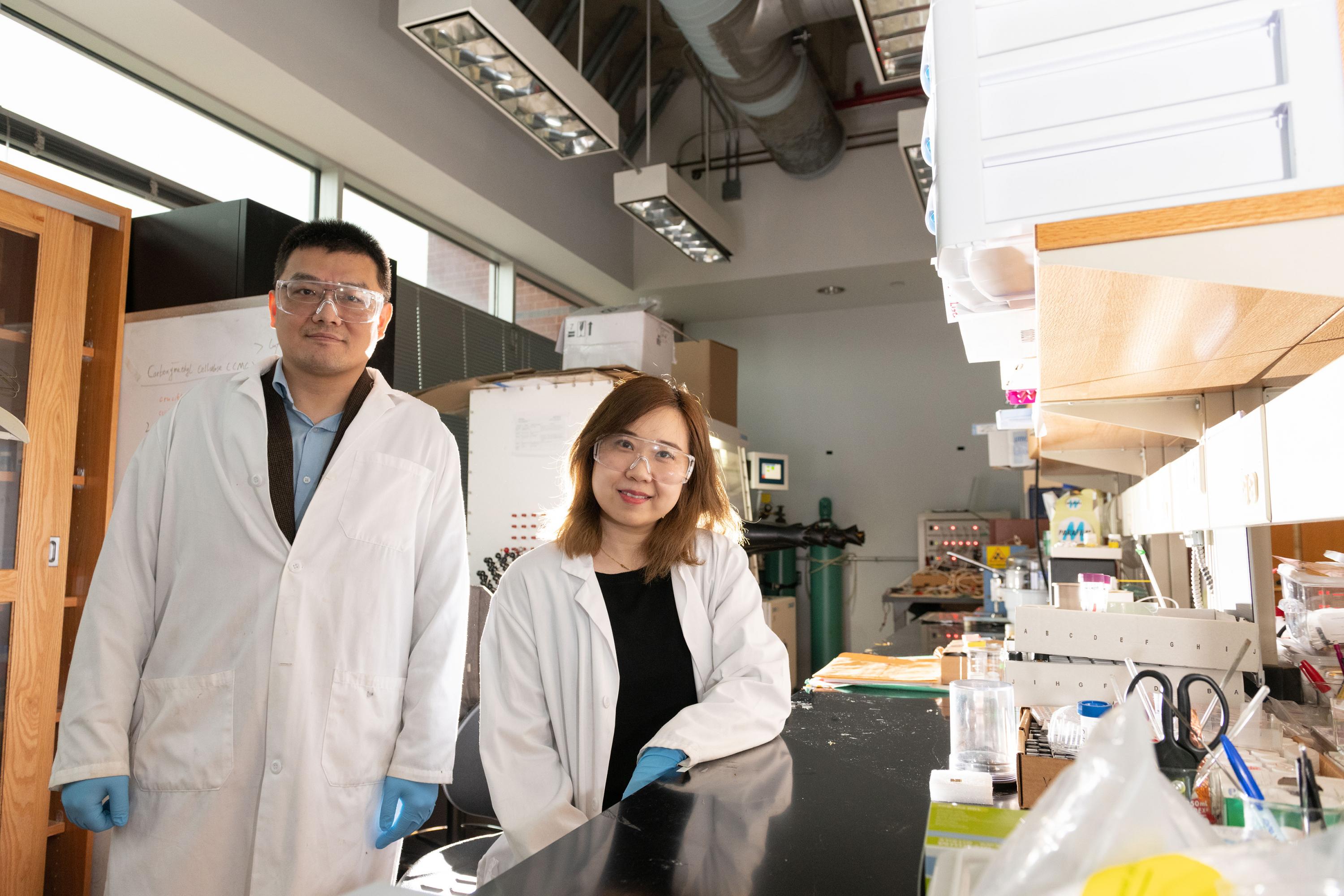 Hailong Chen, an assistant professor in the George W. Woodruff School of Mechanical Engineering, and Xuetian Ma, a graduate research assistant, are shown in their laboratory. The researchers determined for the first time what controls formation of two different nanoscale crystalline structures in the metal cobalt. (Credit: Allison Carter, Georgia Tech) 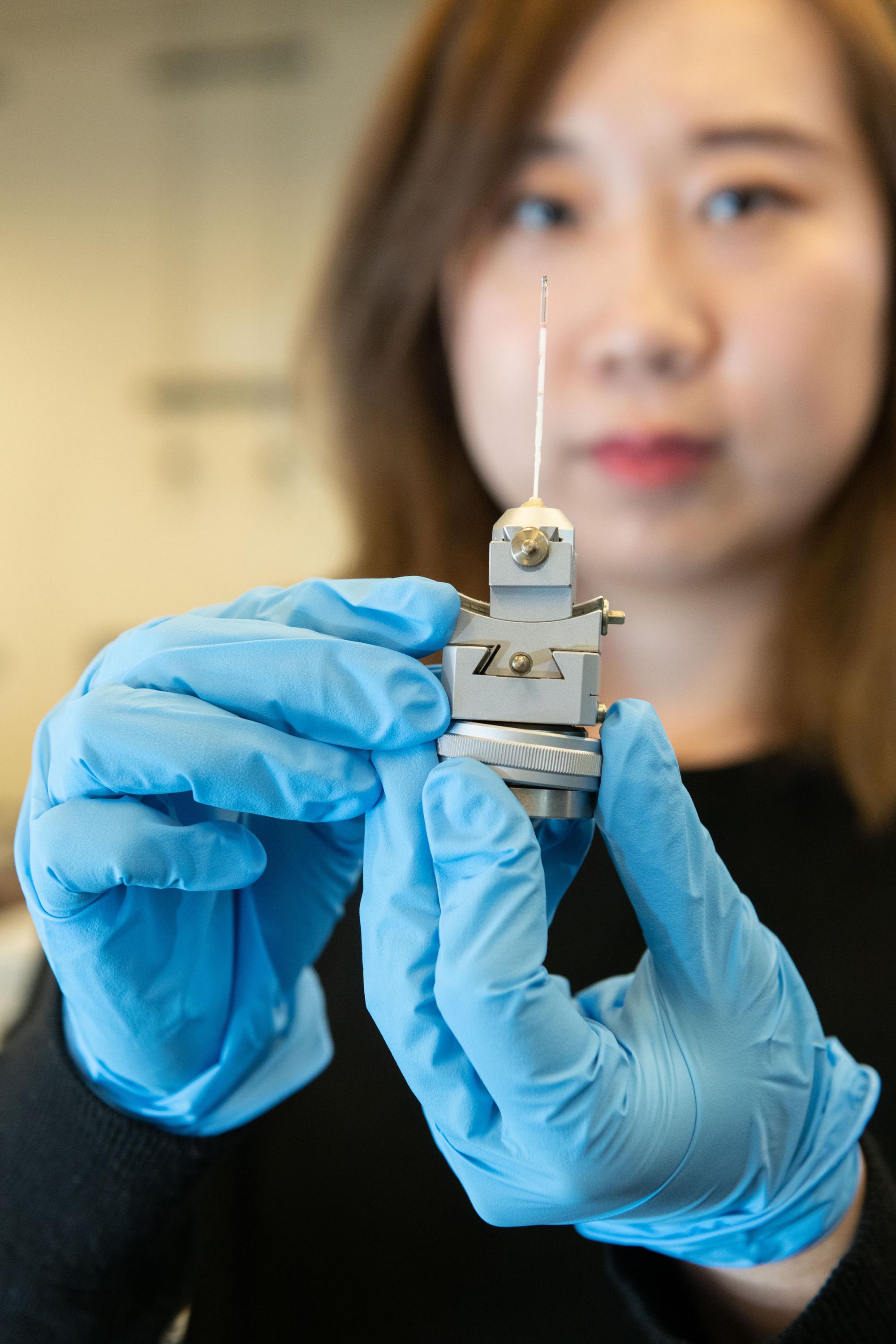 Georgia Tech graduate research assistant Xuetian Ma holds a reaction vessel similar to those used in the research on nanoscale crystalline growth. The vessels were made of a high-strength quartz tube about a millimeter in diameter and about two inches long. (Credit: Allison Carter, Georgia Tech)