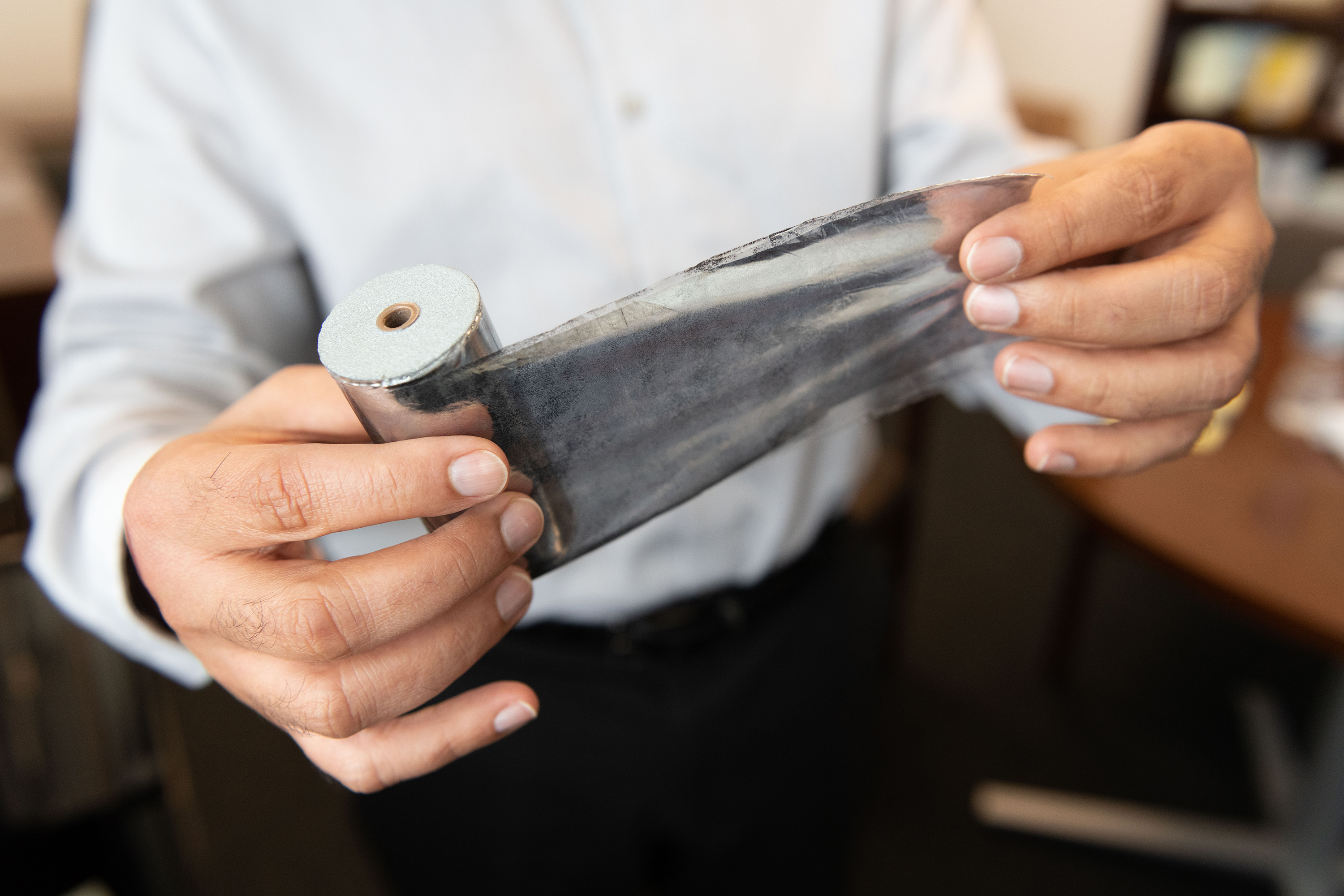 Rampi Ramprasad, a professor in the School of Materials Science and Engineering, holds an aluminum-based capacitor. (Credit: Allison Carter)

Capacitors, given their high energy output and recharging speed, could play a major role in powering the machines of the future, from electric cars to cell phones.

But the biggest hurdle for these energy storage devices is that they store much less energy than a battery of similar size.

Researchers at Georgia Institute of Technology are tackling that problem in a novel way, using machine learning to ultimately find ways to build more capable capacitors.

The method, which was described in February 18 in the journal npj Computational Materials and sponsored by the U.S. Office of Naval Research, involves teaching a computer to analyze at an atomic level two materials that make up some capacitors: aluminum and polyethylene.

The researchers focused on finding a way to more quickly analyze the electronic structure of those materials, looking for features that could affect performance.

“The electronics industry wants to know the electronic properties and structure of all of the materials they use to produce devices, including capacitors,” said Rampi Ramprasad, a professor in the School of Materials Science and Engineering.

Take a material like polyethylene: it is a very good insulator with a large band gap—an energy range forbidden to electrical charge carriers. But if it has a defect, unwanted charge carriers are allowed into the band gap, reducing efficiency, he said.

“In order to understand where the defects are and what role they play, we need to compute the entire atomic structure, something that so far has been extremely difficult,” said Ramprasad, who holds the Michael E. Tennenbaum Family Chair and is the Georgia Research Alliance Eminent Scholar in Energy Sustainability. “The current method of analyzing those materials using quantum mechanics is so slow that it limits how much analysis can be performed at any given time.”

Ramprasad and his colleagues, who specialize in using machine learning to help develop new materials, used a sample of data created from a quantum mechanics analysis of aluminum and polyethylene as an input to teach a powerful computer how to simulate that analysis.

Analyzing the electronic structure of a material with quantum mechanics involves solving the Kohn-Sham equation of density functional theory, which generates data on wave functions and energy levels. That data is then used to compute the total potential energy of the system and atomic forces.

“This unprecedented speedup in computational capability will allow us to design electronic materials that are superior to what is currently out there,” Ramprasad said. “Basically we can say, ‘Here are defects with this material that will really diminish the efficiency of its electronic structure.’ And once we can address such aspects efficiently, we can better design electronic devices.”

“In part we selected aluminum and polyethylene because they are components of a capacitor, but it also allowed us to demonstrate that you can use this method for vastly different materials, such as metals that are conductors and polymers that are insulators,” Ramprasad said.

The faster processing allowed by the machine learning method would also enable researchers to more quickly simulate how modifications to a material will impact its electronic structure, potentially revealing new ways to improve its efficiency.

This research was supported by the Office of Naval Research under grant No. N0014-17-1-2656. The content is the responsibility of the authors and does not necessarily represent the official views of the sponsoring agency. 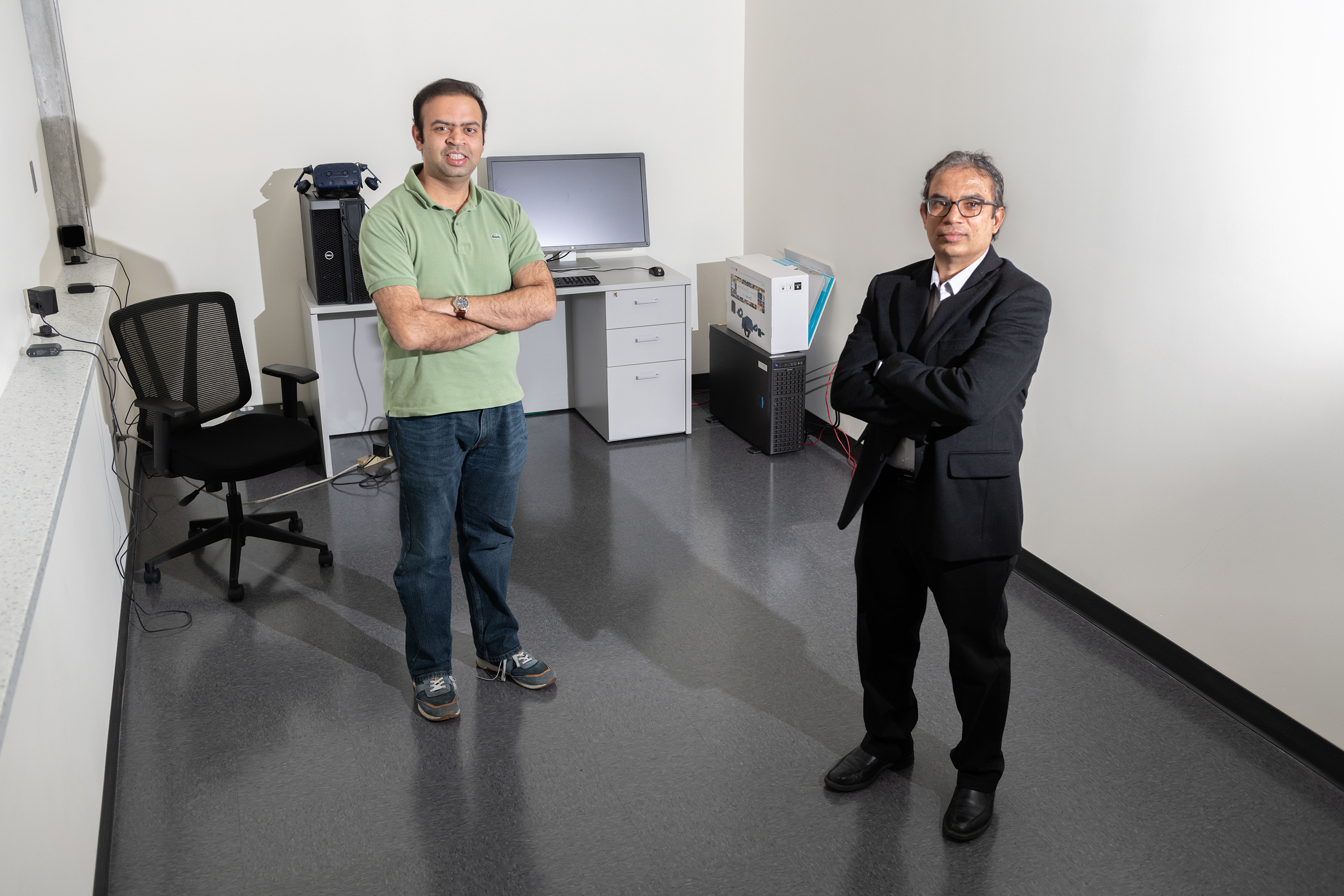 Anand Chandrasekaran, a postdoctoral researcher, and Rampi Ramprasad, a professor in the School of Materials Science and Engineering, stand in a room with a high-powered computer dedicated to machine learning. (Credit: Allison Carter)