Lisa Marks, assistant professor in the School of Industrial Design, and her Algorithmic Lace project won the Grand Prix at the Lexus Design Award Event at Design Week in Milan, Italy, April 8.

The competition received more than 1,500 entries from up-and-coming creators around the world aspiring to “Design for a Better Tomorrow.” With a better tomorrow in mind, Marks’ design gives women an optimistic start in their new beginning.

Marks was among six semi-finalists for the prestigious competition and the only semi-finalist from North America.

Marks’ achievement stems from a career and research focus in methods of integration between endangered traditional handcraft with algorithmic modeling, with the aim of creating new modes of production. As a professor at Georgia Tech, Marks furthers her impact through her research lab focused on digital modeling combined with handcraft.

In a world where certain types of crafts are favored over others in design, Lisa Marks sees a need and an opportunity to blend industrial design and forms of traditional craft, not only for craft revitalization but for better, more inclusive design.

During Marks’ time as an Industrial Design student, she was involved in a material exploration project. From this project was born her initial point of focus when she decided on knit material as her point of exploration. Through the project, Marks created her first knitting tool.

Over time, Marks began to approach the idea of knitting in different materials and participated in a project based around the bamboo trade in Thailand, in collaboration with the Thai government.

In a country rich in craft communities, how could a thriving bamboo trade help minimize its increasing wealth gap?

It has been years since Marks’ visit but she fondly remembers her travels to Thailand. Based on her observation, she felt that craft revitalization could help empower communities on the less fortunate side of the wealth gap.

“It was really striking to see the wealth gap. 40% of their population only has 2% of the wealth, and if they were to continue to lose handcraft the wealth gap would have little room to improve,” Marks said.

As a professor at Georgia Tech’s School of Industrial Design, Marks advocates for empathetic design that humanizes innovative technologies to solve global problems. “Grad students are currently looking for creative ways to combine craft and industrial design to revitalize,” Marks said, showing the implications of her coursework in shaping proactive and solution-oriented design.

In her time in Thailand, Marks worked with craft communities to approach the problem with the wealth gap, a dilemma not unique to Thailand, and began to see the need for exportable modern design among craft communities. Marks ended up creating a series of objects that used parametric modeling to knit semi-rigid material with knit bamboo.

“This led me to a larger interest in craft revitalization and different ways of thinking to incorporate craft and design,” she said. This approach directly impacted her decision to focus her thesis on a similar opportunity to revitalize the craft of Croatian bobbin lace.

Marks’ approach is socially responsible and fills a growing need.

This is a form of design practice that not only thinks of the end-user, but also empowers the original designers, she said, the ones that are passing down centuries of historically driven design. “As designers, we can contribute. We can design objects using these techniques.”

As a professor at Georgia Tech, Marks teaches that design not only needs to express creativity, but also explore solutions around the world.

The original computers and binary code were inspired by the weaving process. Advancement and craft have always been integrated and there is importance in understanding the history of where things come from. “Let’s not forget the importance of craft in our modern world,” Marks said.

With advancement and craft in mind, Marks developed the idea of a post-mastectomy bra. One that could be custom-crafted for each woman to avoid common bra discomforts after surgery. Her unique research track helped identify Marks as a valuable faculty addition for the Industrial Design program, and in her short time at Tech, Marks has continued her exploration into handcraft and algorithmic modeling to further develop her designs.

Marks has been very pleased with the support she has received. “My specialization has been valued and is encouraged at an R1 like Georgia Tech. Algorithmic Lace is now part of a design award!”

While our society is currently obsessed with plastic, automation, and apps, Marks said, “the obsession with 'one' has also yielded to conversations about craft."

"Not everything is a smooth shiny object. When you go home and look around at your belongings, most of them are not that.” To Marks, it is evident people have begun to recognize that some crafts are dying out.

Craft objects carry history and comfort that we want in our environment. “I think we have to fight to keep craft alive and part of that is incorporating craft into the built environment, which is what designers do,” she said.

For years, Marks conducted 3-D modeling projects to analyze the base mathematics behind a stitch of a particular fabric and using that to create design. The idea of algorithmic patterning is using mathematic inputs to “model, in this case, each stitch on a micro level and mathematically modeling proportions, shapes and such,” Marks said.

“I think understanding the math honors the history of how these patterns use to be integrated and their influence in inspiring others.”

The advancement of craft through the Algorithmic Lace project has a unique thought process for Marks.

“As industrial designers, we can create objects by thinking of what we can do with our hands, but we can’t do with machines. We can make lace with machines, very easily, we do it all the time – but, as yet, machines cannot make three-dimensional lace,” she said.  This thought process applied to the idea of a post-mastectomy bra, and how craft can be revitalized from what a machine cannot do to enhance user experience.

Given that women with a mastectomy have very sensitive skin, “About 40 percent of women with a post-mastectomy choose to not have reconstructive surgery," Marks said.

"Many wear mastectomy bras and external prosthetics that are very heavy and create discomfort. Since seams, underwires, and traditional bras can be uncomfortable, with the Algorithmic Lace bra, you can create a three-dimensional bra that fits the body and honors whatever form the body is."

The way that the Algorithmic Lace is patterned creates an optical illusion of fullness, so when looking at a mirror there is a sense of symmetry where there isn’t, giving women an optimistic start in their new beginning.

The process of creating a custom bra requires the woman to have a 3-D body scan. The scan captures everything from size to depths and a program then takes a basic pattern on lace and morphs it onto the body. The base math can then be edited through the points and lines to make it more or less dense, and fully customized for the woman’s comfort.

There are many design choices that the woman can make. This freedom to decide empowers women. As Marks explained, “For instance, some women want it to look more symmetrical, some women may want more dense lace to follow the scar to have the bra express her shape. The pattern is up to women and their design choices.”

With about six months of aggregated work into the Algorithmic Lace design, Marks now advances to develop working prototypes with mentorship by highly respected world-class design leaders – and represents Georgia Tech and the United States on a high level. The prototypes will debut on April 8, 2019, during the Milan Design Week, where the Grand Prix winner of the Lexus Design Award 2019 will be announced.

Given the decline of different hand-craft skills, and the way that different communities depend on hand-craft, Marks said she believes it is worth thinking about how we can design in ways that are really efficient, modern, and exportable to create jobs in these communities. Marks would like to see the project move forward, even if not manufactured, as a speculative project. One that brings attention to craft revitalization through design. The possibilities of good design are endless. 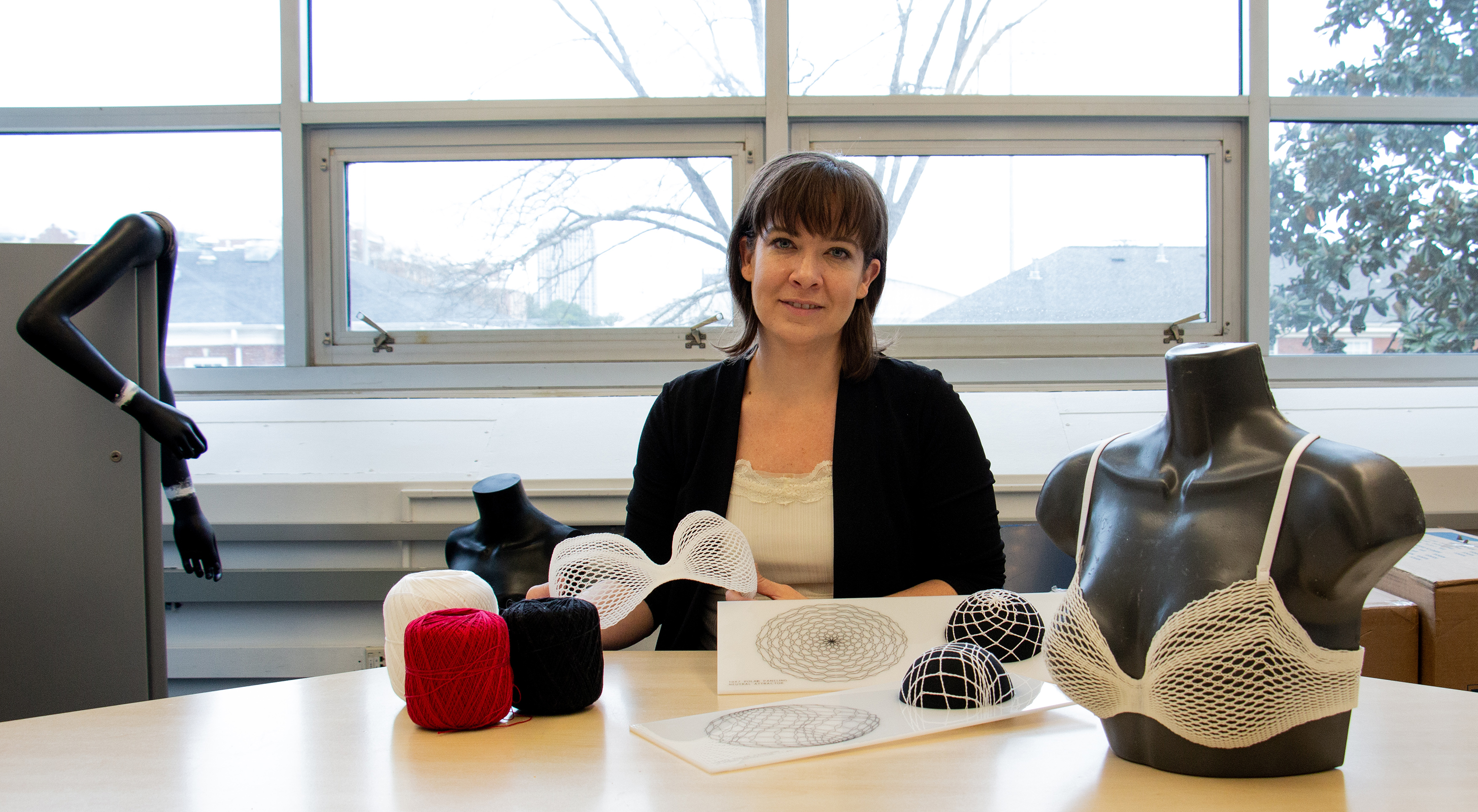