A standing-room only crowd gathered at the Global Learning Centr for the 11th Annual Diversity Symposium.

A capacity crowd of students, faculty, staff, and alumni gathered at the Global Learning Center Wednesday morning to explore Georgia Tech’s racial diversity journey. Others tuned in to watch a live stream of the 11th Annual Diversity Symposium.

“This is a once-in-a-lifetime opportunity to look back at where Georgia Tech was and to think about where we can be,” said Ervin.

“It's often said that the current generation is the beneficiary of the sacrifices of previous generations,” he said. “This is especially appropriate today, for we are indeed standing on the shoulders of giants — strong men and women whose courage to act nearly six decades ago has altered the course of Georgia Tech forever.”

“What is clear to me is that things don’t just change. They don’t just happen. They may seem inevitable after they happen. But it actually takes courageous acts of people who call out injustice and who take personal risks,” Cabrera said. “What is inspiring to me is that when those courageous leaders take action and they show us the way, they help us see the world differently.”

One panel, facilitated by Jacqueline Royster, professor and former dean in the Ivan Allen College of Liberal Arts, featured Georgia Tech’s first three African American students: Ford C. Greene, Ralph A. Long Jr., and Lawrence Williams, and Georgia Tech’s first African American graduate: Ronald L. Yancey, EE 1965. Royster began by asking the panelists, “Why did you choose to come to Tech, and what did you bring with you?”

“All of us had outstanding academic achievements as well as sports and the arts," said Long, who graduated from what was then Henry McNeal Turner High School. "My objective was to dispel several myths — number one, that black kids could not withstand the academic rigors of Georgia Tech.”

After applying several times, the three young men were accepted and began classes in 1961. Yancey enrolled a year later. They didn't socialize or study together, but they knew each other’s schedules — just in case.

The men shared stories of feeling isolated and unwelcome at Tech. But there were some bright moments along the way.

Greene spoke about an incident in Army ROTC during which Tech football player Charles "Chick" Graning came to his aid.

“My very first class on my very first day was Army ROTC," Greene said. "It was mandatory. I was placed in the front rank. There were numerous ugly remarks coming from the rear of the rank. Fortunately, a big man on campus, Chick Graning, the star running back, was the platoon commander. I can't repeat what Chick told them, but it had something to do with severe bodily harm. His final threat was, 'I will put you out of ROTC.' ROTC was a requirement for graduation. So, never again did I hear that."

When the panelists were asked how their parents felt about sending their sons off to an all-white university, Yancey recalled, “My mother was terrified, but she never said it. My father asked what I was thinking, but they were both happy to see me get away from demonstrating in downtown Atlanta, so they felt I might be a little safer at Georgia Tech.”

The afternoon brought the unveiling of sculptures honoring Greene, Long, Williams, and Yancey.

“We are honored that all of these sculptures are dedicated today in Harrison Square, as they will be constant reminders of the trailblazers' courage in the face of adversity,” said Ervin.

President Cabrera thanked his predecessors G.P. “Bud” Peterson and G. Wayne Clough, for their support of the Trailblazers sculptures and the arts in general. He then thanked the honorees for sharing their stories

“Those four stories are of unassuming but incredibly effective leadership. Stories of courage. Stories of people who really knew the moment,” Cabrera said. “It is thanks to their work and their courage that this place is a global example of inclusion, and the place where more African American engineers graduate. You own that story, and we thank you for it.”

Rafael L. Bras, provost and executive vice president for Academic Affairs, the K. Harrison Brown Family Chair, and a champion of Arts@Tech, said, “These pieces have much to teach us. The journey of these four men, the trailblazers, is a part of our history that must not be forgotten.”

Francis S. “Bo” Godbold, IE 1965, a classmate of the trailblazers, was inspired by their courage. He and his wife Betsy provided the philanthropic support to make the sculptures possible.

“I wasn’t prepared for how emotional the last 24 hours were,” Godbold said. “When I was talking to Ron Yancey’s son Jason early this morning I felt myself tearing up. I couldn’t even talk.”

When they were students, Godbold sat in front of Ford Greene because students were seated alphabetically.

“These four guys are why I’m here and why I did this,” Godbold said. “I want to salute their bravery. I have thought long and hard about this. Would I have been brave enough to do this? And my answer is no. I just don’t think I would have had the courage to do what they did. I really appreciate you.”

Explaining his hopes for the impact of the scuptures, he told the crowd, “I would like today’s students, next year’s students, Ralph’s grandson, my grandson, their children, and their grandchildren to look at them someday and say, ‘What? Schools were segregated? Why? That’s really stupid. And wrong.'"

Godbold added, "I hope they will accomplish that, and we’ll continue to move forward, not backward." 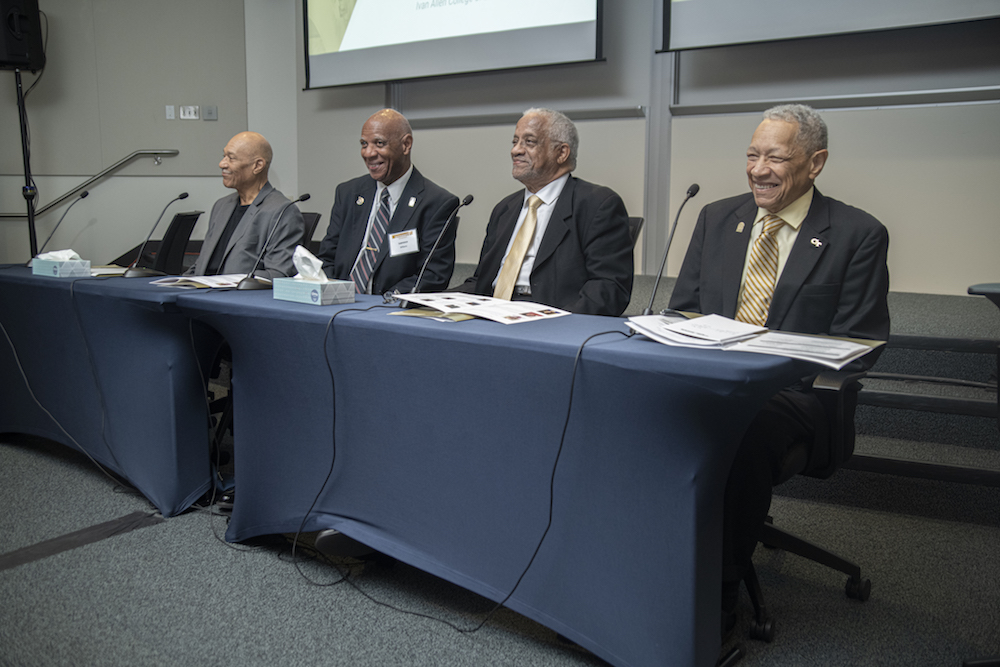 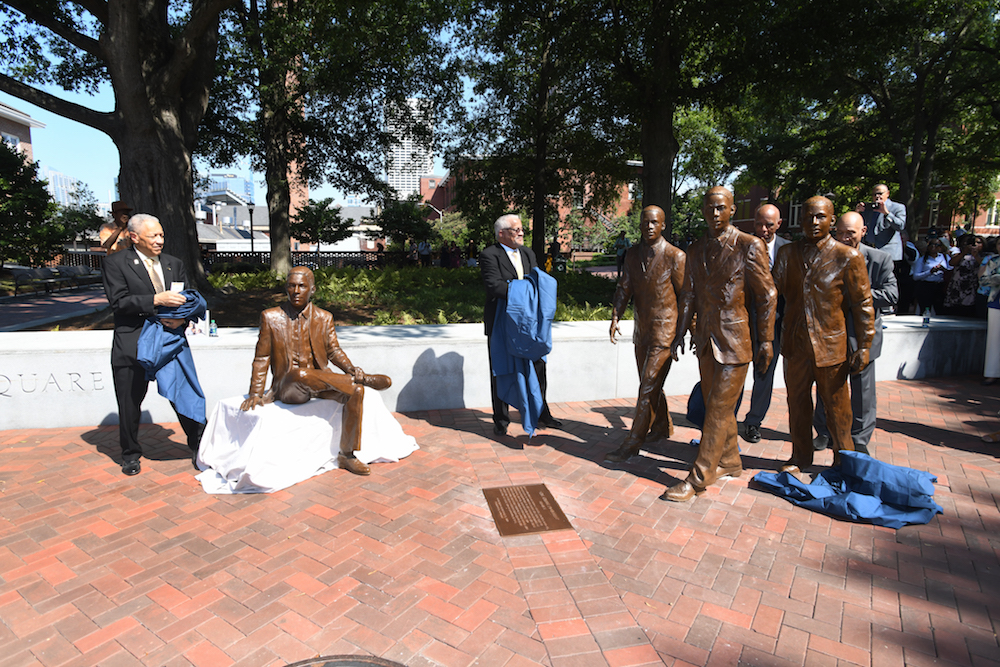 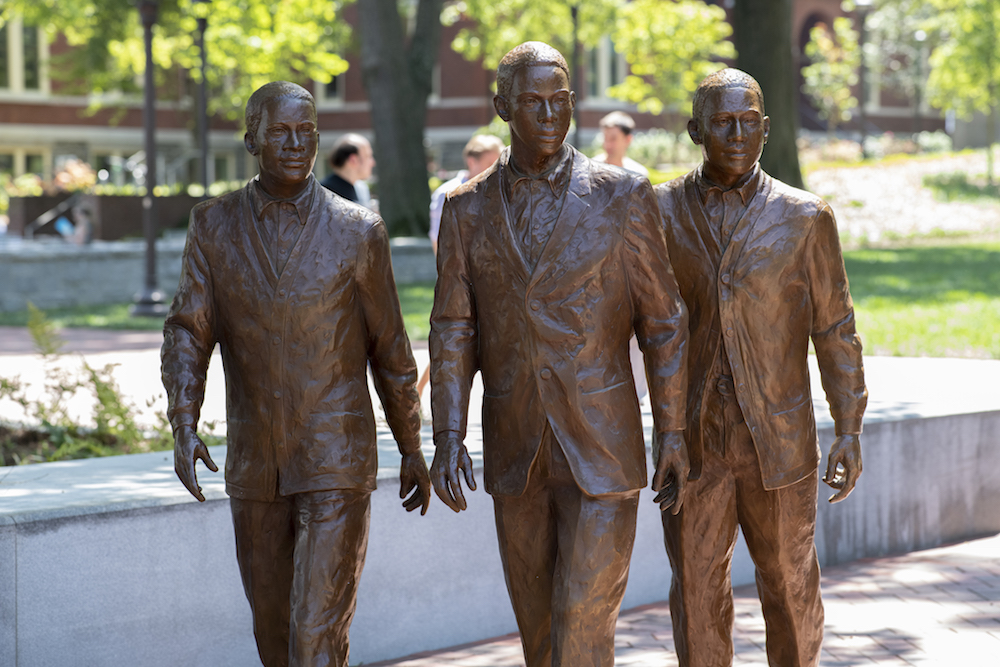 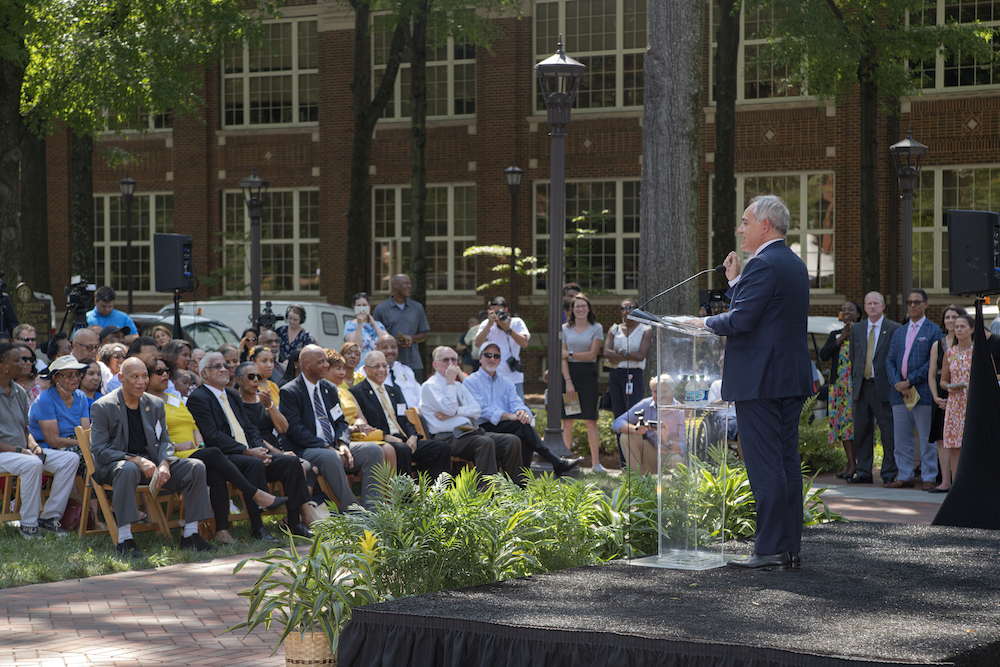 President Ángel Cabrera addresses the honorees and guests in Harrison Square before unveiling the Trailblazers sculpture. 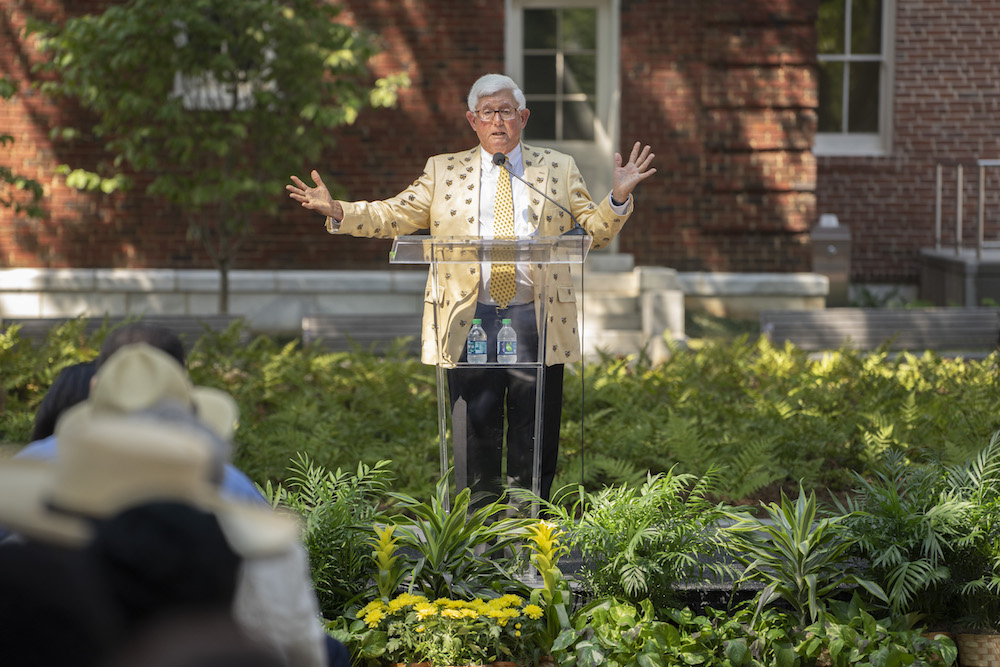 Francis S. “Bo” Godbold, IE 1965, a classmate of the trailblazers, was inspired by their courage. He and his wife Betsy provided the philanthropic support to make the sculptures possible. Photo by Christopher Moore.