It was so obvious the country was going to have a hand sanitizer crisis, but few wanted to acknowledge it. 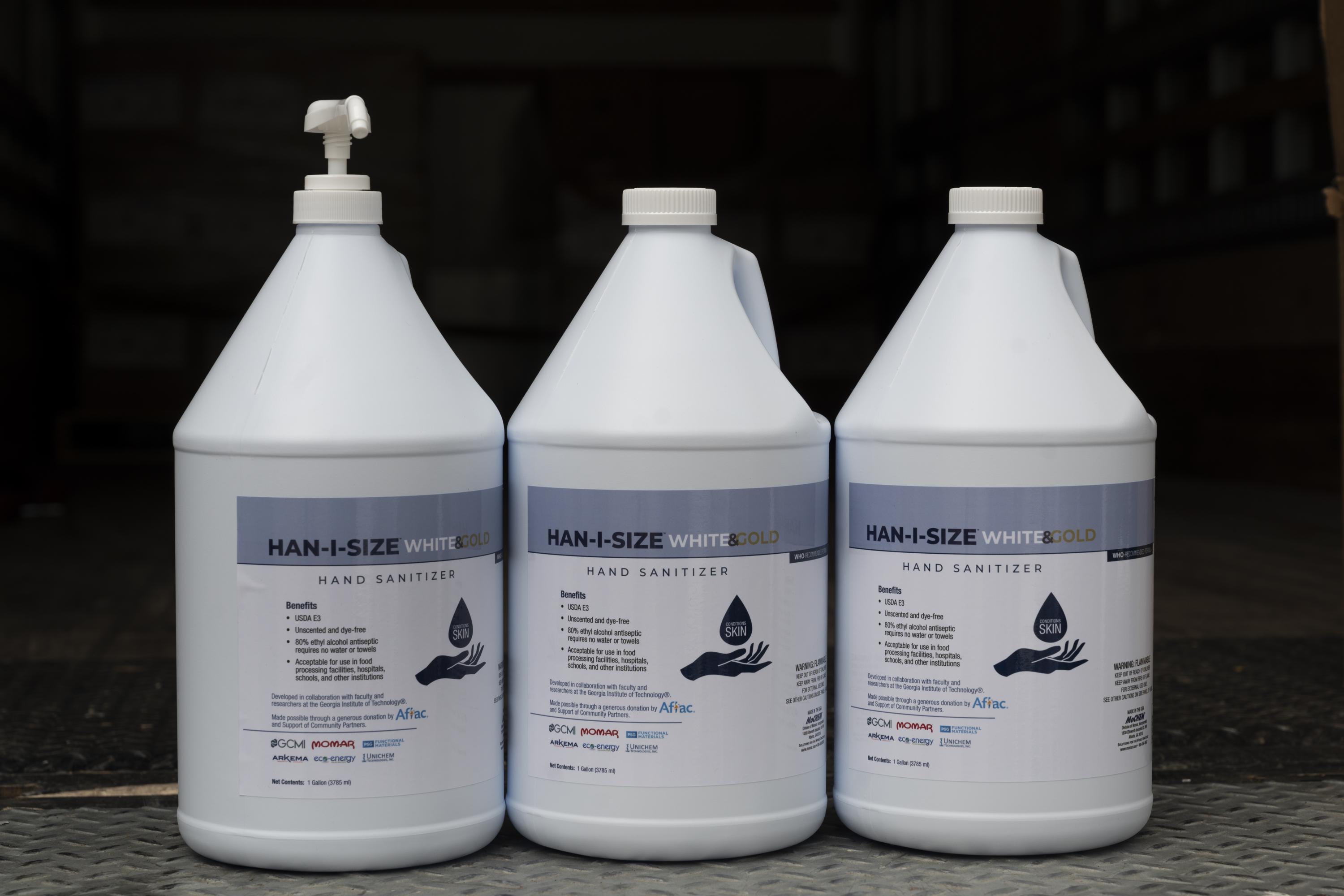 Hand sanitizer was about to run dangerously low across the U.S. but charitable volunteers from Georgia Tech rescued it by turning to fuel-grade ethanol and a special FDA waiver. Then they donated 7,000 gallons to hospitals and nursing homes. Credit: Georgia Tech / Christopher Moore

So many people Seth Marder spoke to didn’t see the hand sanitizer crisis brewing. The country was going to run dangerously short if someone did not act urgently.

The professor at the Georgia Institute of Technology rallied colleagues and partners around the cause in March, and by early June, they had replaced a key component of hand sanitizer, created a new supply chain, and initiated their own donation of 7,000 gallons of a newly designed sanitizer to medical facilities.

Its name: Han-I-Size White & Gold, named for the colors of Georgia Tech. The new supply chain also may ensure that hand sanitizer producers across the country do not run out of the main active ingredient, alcohol, but the team’s path to success was a stony labyrinth.

“This project was on life support so many times because people did not understand how severe this shortage was going to be,” said Marder, a Regents Professor in Georgia Tech’s School of Chemistry and Biochemistry. “I called hospitals and institutions to assess the need and heard the same thing over and over: ‘No, we just got a delivery. We have no need. You’re wasting your time.’”

Marder was not. Contacts at major chemical suppliers of hand sanitizer ingredients said that a critical shortage of alcohol, particularly the one usually in hand sanitizer, isopropanol, was coming.

“Isopropanol plants in the U.S. were running at full capacity and still didn’t have enough. People were using pharmaceutical-grade ethanol now, too, but it was also in short supply. We weren’t going to have enough of either; I mean the whole United States was running low,” Marder said.

To the three chemists and the business professional, it seemed simple: Mix alcohol with water, peroxide, and the moisturizer glycerin then bottle and ship it. That bubble burst quickly.

Luettgen, who had worked in the consumer products industry for 25 years at Kimberly-Clark Corporation and knew how to take products to market, had to plow through constant unexpected supply chain barriers and bureaucracy while White forged connections between companies. Neither the supply chain nor the business relationships had existed before, and the teams’ phones stayed glued to their ears night and day as they created them from scratch.

“When I worked for Kimberly-Clark, getting a new product out would take the company nine to 18 months, and the three of us had to get this done in weeks. The demand was there, and people were getting sick in some cases from lack of sanitizing. We felt speed was necessary to meet the growing demand. Seth told me to push this across the goal line, and I put everything into it,” Luettgen said.

“Georgia Tech is about the power to convene. Companies and stakeholders are eager to come to the table here to make things happen,” White said about forging new business ties. “Not everyone has that incredible recognition as a problem solver with the brainpower amassed here.”

Purchasing truckloads of alcohol was priority one.

Boutique liquor distilleries in Georgia were already converting to sanitizer ethyl alcohol production, but output was nowhere near enough to meet demand. ExxonMobil connected the team with Eco-Energy, a company that handles fuel-grade ethanol as a gasoline additive.

“The amount of ethanol that’s made for fuel in the U.S. is 1,500 times the amount of the isopropanol made. They could drain off about 1 percent of what is used for fuel and double or triple the amount of alcohol available for hand sanitizer in this country. And the fuel companies wouldn’t even notice it was gone, especially since hardly anyone was driving anymore,” Marder said.

But then prospective hand sanitizer distributors crimped their noses at that ethanol, saying it smelled odd.

“I thought, ‘This has the makings of a screenplay.’ I asked the distributor if we could come over to smell a sample for ourselves,” White said. “It needed a little love.”

The Georgia Tech team garnered funding through a donation from insurer Aflac Incorporated allocated through the Global Center for Medical Innovation (GCMI), a Georgia Tech affiliated non-profit organization that guides new experimental medical solutions to market. Aflac’s gift of $2 million through GCMI has also expedited the development, production, and purchase of other PPE to donate to health care workers.

In addition, GCMI helped guide the hand sanitizer through regulatory processes and to market. In a another development, the U.S. Food and Drug Administration was also aware of the dire shortage of alcohol for sanitizer and issued waivers for the pandemic to allow for use of ethanol in sanitizers without having to meet usual specifications.

Arkema, Inc. donated hydrogen peroxide, which was delivered to PSG Functional Materials, which mixed and packaged the product then shipped with no delivery fee to Atlanta. Though water is ubiquitous, hand sanitizer requires purified water, and the Coca-Cola Company donated a tanker truck of it just when White was pondering desperate measures.

“If I have to get a truck to go pick up water and drive it, I’ll do it myself,” he said.

Finally, the first few hundred gallons of donated Han-I-Size White & Gold rolled into Piedmont Healthcare in Atlanta and Brightmoor Nursing Center in Griffin, Georgia, in the second week of June 2020.

GCMI is facilitating donations of the 7,000 gallons nationwide. Separate from the Aflac-financed donations, Momar will continue to manufacture the new hand sanitizing formula commercially to include in its regular product lineup, and Georgia Tech will be able to purchase it at a reduced rate to help protect researchers now returning to their labs.

The new supply chain, the first of its kind, of “waiver-grade” ethanol has given hand sanitizer producers across the country a new opportunity to re-supply America.

Read about what else we are doing to help in the Covid-19 crisis. 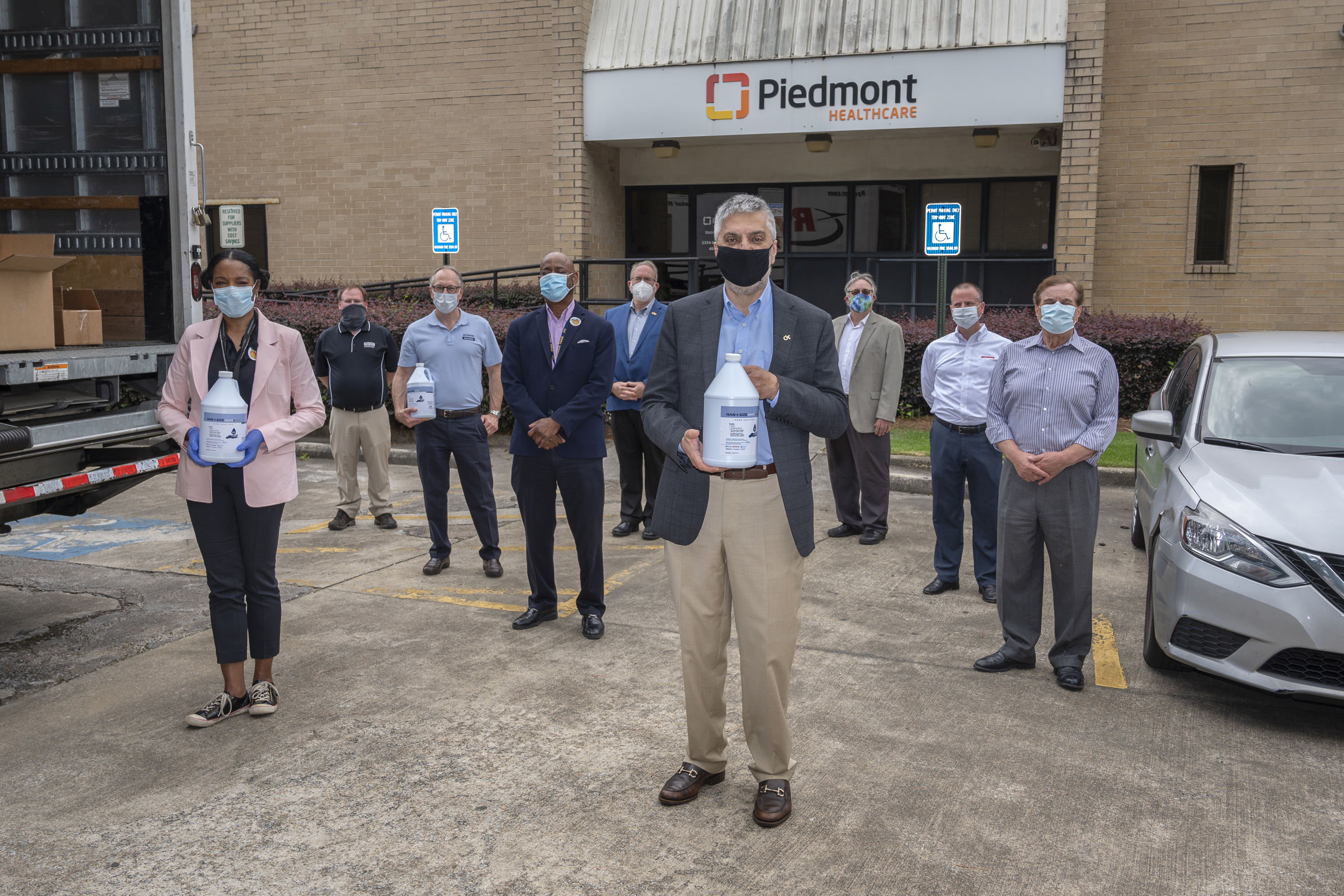 Here, many participants in the effort that re-made hand sanitizer using fuel-grade ethanol on its first day of delivery. The volunteers will donate 7,000 gallons of Han-I-Size White and Gold to hospitals and nursing homes across the country. In front, Dr. Chaouki Abdallah, Executive Vice President for Research, congratulates the group on its success. 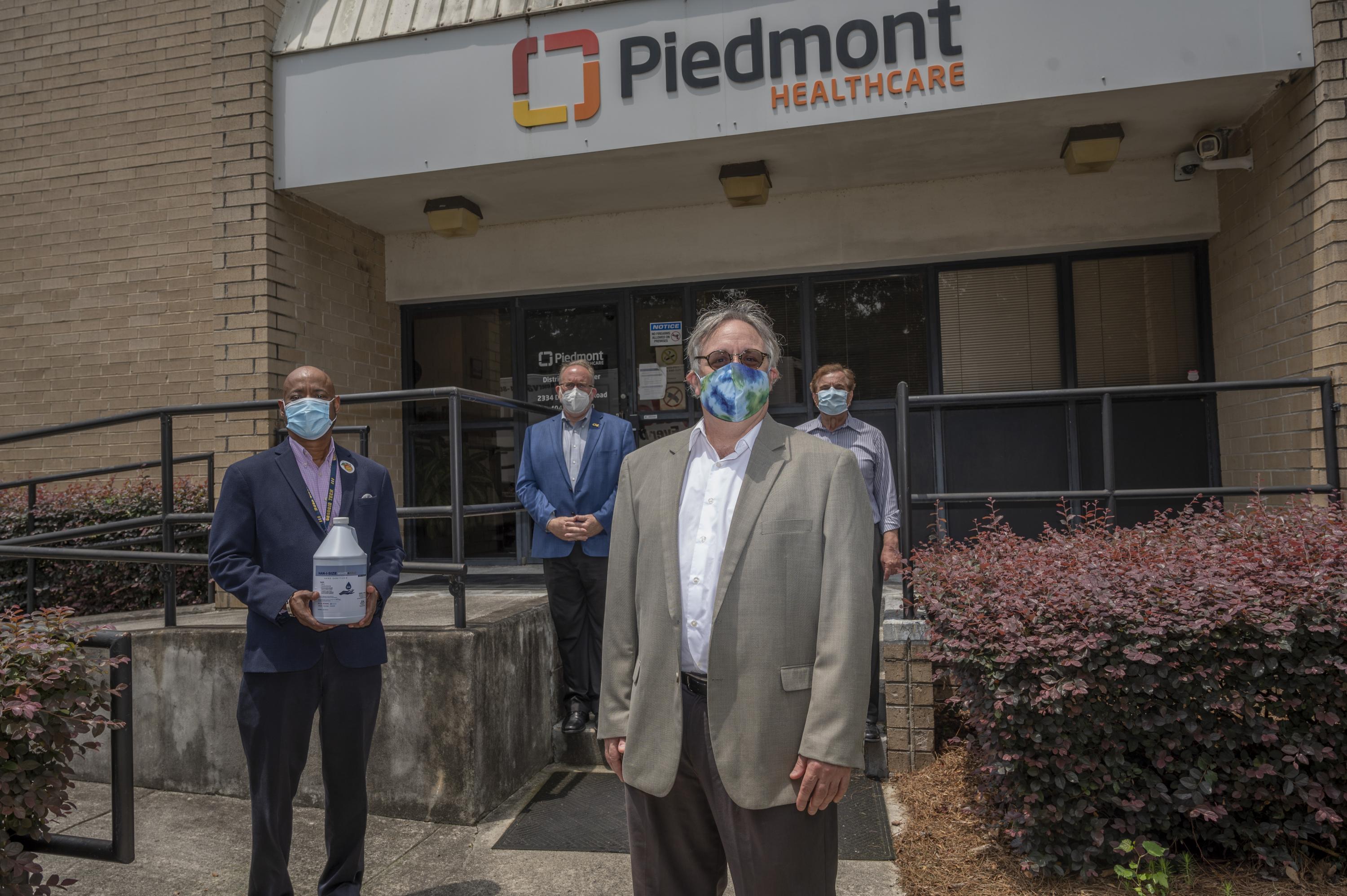 The heroes who redesigned hand sanitizer and donated 7,000 gallons of their own brand to hospitals and nursing homes. From left to right: George White, Chris Luettgen, Seth Marder, and Atif Dabdoub. Here at a delivery to Piedmont Healthcare of Atlanta. Credit: Georgia Tech / Christopher Moore 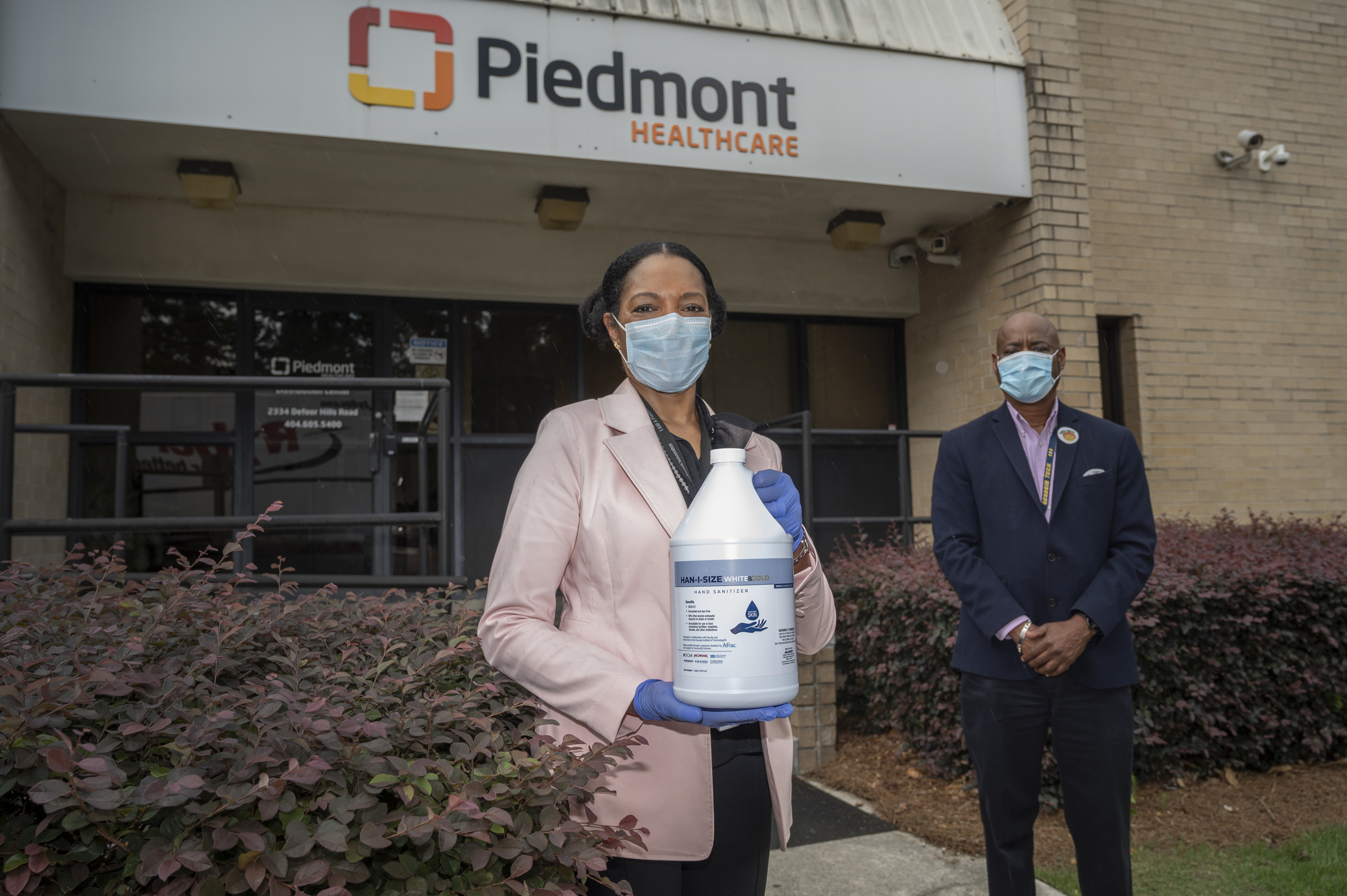 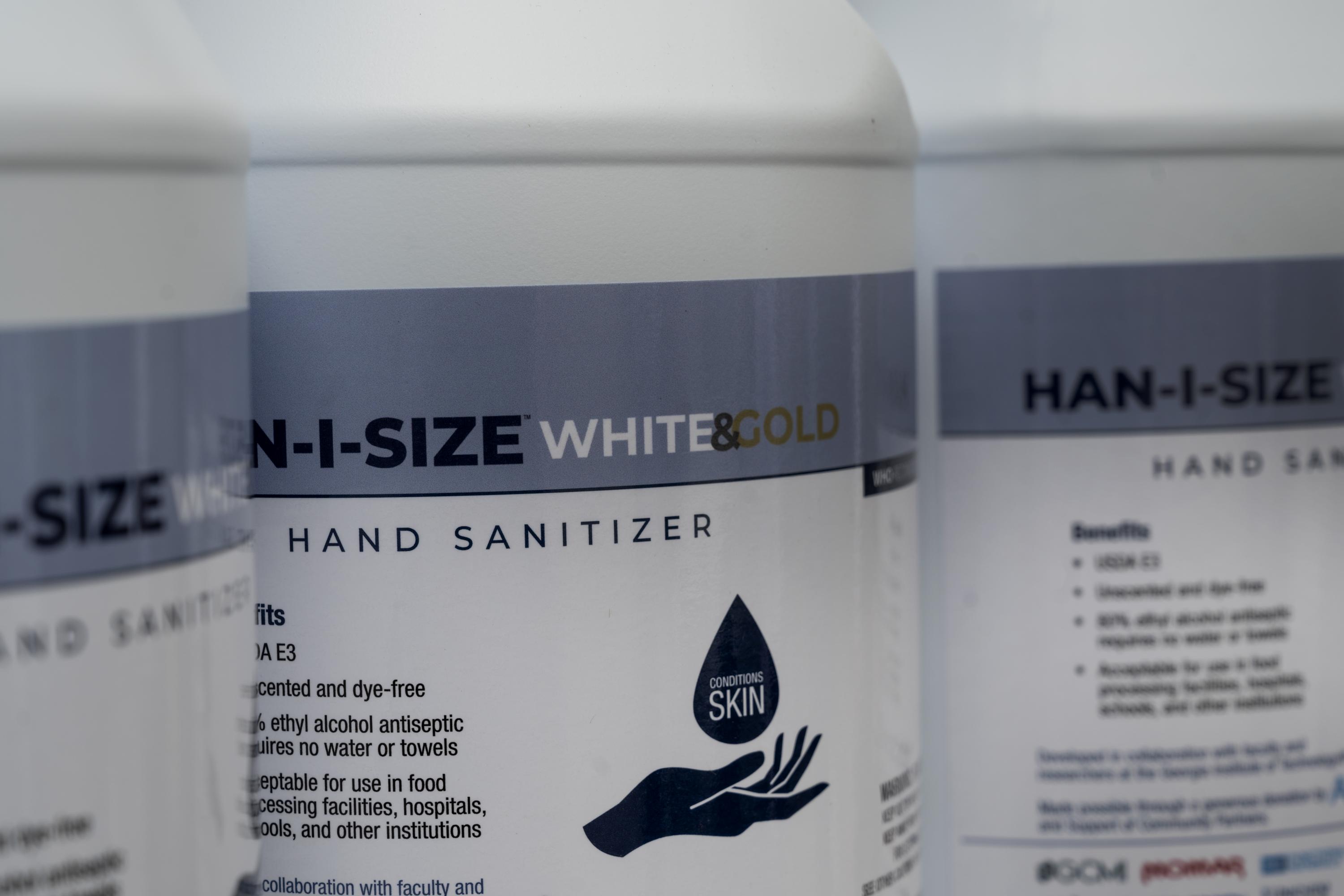 Hand sanitizer was about to run dangerously low across the U.S. but charitable volunteers from Georgia Tech rescued it by turning to fuel-grade ethanol and a special FDA waiver. Then they donated 7,000 gallons to hospitals and nursing homes. Credit: Georgia Tech / Christopher Moore