Raheem Beyah has been selected as Georgia Tech’s new dean and Southern Company chair of the College of Engineering, and will begin his duties as dean on Jan. 15. 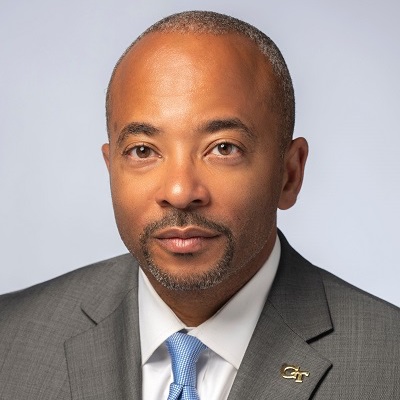 Raheem Beyah has been selected as Georgia Tech’s new dean and Southern Company chair of the College of Engineering. Beyah is currently Georgia Tech’s vice president for Interdisciplinary Research, executive director of the Online Master of Science in Cybersecurity program, and is the Motorola Foundation Professor in the School of Electrical and Computer Engineering (ECE) at Tech. He will begin his duties as dean on Jan. 15. Beyah is replacing Steven McLaughlin in that position. McLaughlin assumed duties as Georgia Tech’s provost and executive vice president for Academic Affairs on Oct. 1, 2020.

“We are fortunate to have the largest and one of the best engineering programs in the nation, in large part due to the teaching, research, and national leadership of our faculty. Raheem Beyah is collaborative, visionary, innovative, and committed to people. I look forward to working even more closely with him in his new leadership role in the College of Engineering,” said Steven McLaughlin.

Beyah is a Georgia Tech alumnus. He earned his master’s and Ph.D. in electrical and computer engineering from Georgia Tech in 1999 and 2003, respectively. He received his Bachelor of Science in Electrical Engineering from North Carolina Agricultural and Technical State University in 1998. A native Atlantan, he is a graduate of the Atlanta Public Schools system.

Beyah also leads the Communications Assurance and Performance Group and is affiliated with the Institute for Information Security and Privacy. He is co-founder and board chair of Fortiphyd Logic Inc., an industrial cybersecurity company. He serves as Institute data security lead. He is co-founder and a steering committee member of the Academic and Research Leadership Network.

He has held several additional leadership roles at Tech, including serving as interim Steve W. Chaddick ECE School Chair during the 2017-18 academic year, ECE's associate chair for Strategic Initiatives and Innovation (2016-18), and chair of ECE's Computer Systems and Software Technical Interest Group (2015-17).  He received the National Science Foundation CAREER award in 2009 and was selected for the Defense Advanced Research Project Agency (DARPA) Computer Science Study Panel in 2010. He is a member of the American Association for the Advancement of Science (AAAS), the American Society for Engineering Education (ASEE), a lifetime member of the National Society of Black Engineers (NSBE), a senior member of the Institute of Electrical and Electronics Engineers (IEEE), and an Association for Computing Machinery (ACM) distinguished scientist.

Prior to becoming a faculty member at Georgia Tech, Beyah was an assistant professor in the Department of Computer Science at Georgia State University, a research engineer with ECE at Tech, and a consultant with Andersen Consulting (now Accenture). He has served as guest editor for a number of journals and magazines, including IEEE Network Magazine and IEEE Communications Magazine, and as associate editor of several journals in the field.

He has been named to Atlanta Magazine’s “Atlanta 500,” the Atlanta Business Chronicle’s “Up & Comers: 40 Under 40,” and Georgia Trend Magazine’s “40 Best and Brightest Under 40.” Active in the community, he is a graduate of Leadership Atlanta, Leadership Georgia, and L.E.A.D Atlanta.

Leading the 19-member College of Engineering Dean Search Committee was Ayanna Howard, professor and chair, School of Interactive Computing. “We are very grateful to Dr. Howard and all of the members of the search committee for their thorough work on a short timeline and during a challenging semester,” said McLaughlin.

The Georgia Tech College of Engineering continues to be recognized as an elite engineering school and one of the top public institutions in the nation. The undergraduate engineering program at the College is ranked No. 4, and the graduate program is ranked No. 8 in the latest America's Best Colleges edition of U.S. News & World Report. All of the programs, both graduate and undergraduate, offered by the nation’s largest and most diverse engineering college placed among the top 10 in their respective areas. The College is also ranked No. 1 in doctoral degrees awarded to African Americans (Diverse: Issues in Higher Education) and is the largest producer of engineering degrees awarded to women and underrepresented minority students, according to the American Society of Engineering Education and Diverse: Issues in Higher Education.

Georgia Tech’s College of Engineering has more than 150 interdisciplinary research centers and labs. The College occupies more than a million square feet of research and office space on Georgia Tech’s campus. It had more than $270 million in research expenditures in fiscal year 2019. More than one-third of its undergraduate students participate in research.

As one of the most research-intensive academic institutions in the nation, Georgia Tech is committed to the idea that technology, the science that supports it, the scholarship that guides it, and the leadership that deploys it can help improve the human condition.

The Georgia Institute of Technology is a top 10 public research university with nearly 40,000 students who study in person at the main campus in Atlanta, at Georgia Tech-Lorraine in France, at Georgia Tech-Shenzhen in China, as well as through distance and online learning.

Students represent 50 states and 149 countries. Its engineering and computing Colleges are the largest and among the highest-ranked in the nation, and the Institute also offers outstanding programs in business, design, liberal arts, and sciences. With more than $1 billion annually in research awards across all six Colleges and the Georgia Tech Research Institute (GTRI), Georgia Tech is among the nation’s most research-intensive universities. It is an engine of economic development for the state of Georgia, the Southeast, and the nation.

Georgia Tech’s mission is to develop leaders who advance technology and improve the human condition. Its mission and strategic plan are focused on making a positive impact in the lives of people everywhere. For more than 135 years, the people of Georgia Tech have dared to imagine and then create solutions for a better future. The innovative culture and leadership continue, for Progress and Service for all.

Office of the Provost