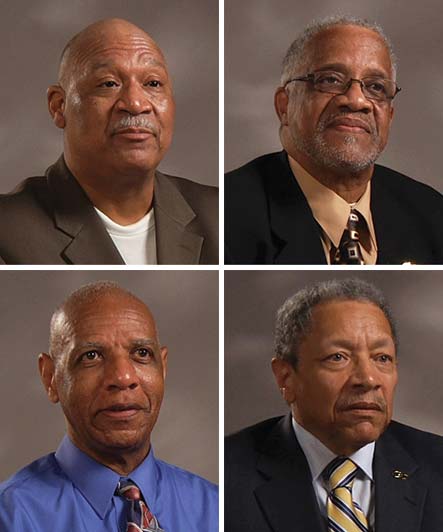 The likenesses of the four men are permanently enshrined in campus sculptures, but now, decades after breaking the color barrier at Georgia Tech, they will join the ranks of past awardees that include Jimmy and Rosalynn Carter, John Lewis, Andrew Young, and other pathbreaking leaders.

“The Ivan Allen Jr. Prize recognizes exemplary, courageous leaders — those who, like Mayor Allen, take on personal risks in an effort to improve the lives of others,” said Georgia Tech President Ángel Cabrera. “With great determination, Ford Greene, Ralph Long Jr., Lawrence Williams, and Ronald Yancey withstood hazards and adversity of every kind to prove to the world that Black students had the right to study at Georgia Tech, paving the way for the thousands of Black Yellow Jackets who have earned their degrees here since.”

Greene, Long, and Williams, dubbed the “three pioneers” in the Harrison Square sculpture that depicts them on their first day at Tech, began classes in the fall of 1961. And, although their arrival didn’t elicit violence as it had at other southern universities, it was not easy. They often felt isolated and unwelcome, and they were acutely aware that many around them assumed they wouldn’t be able to succeed here. As Ronald Yancey, who entered Tech a year later, recalled, “It was a lonely and difficult time. ‘Glares and stares’ is the best way I can put it.”

But they persevered. Greene studied chemical engineering at Georgia Tech. He completed his bachelor’s degree in mathematics and computer science at Morgan State University and worked in telecommunications and information technology systems. He died in 2020 at the age of 76. After attending Tech, Long completed his bachelor’s degree at Clark College (now Clark Atlanta University) in mathematics and physics, and was the first Black systems engineer for the Large Systems Group in the southeastern U.S. at IBM Atlanta. Williams served honorably in the Air Force during the Vietnam War, earning several distinctions and honors. A week after graduating, Yancey began a successful career with the U.S. Department of Defense.

“We rarely award the Ivan Allen Jr. Prize to our own students and alumni, but we were long overdue in bestowing it to these four pioneers,” Cabrera said. “We are honored to celebrate the legacies of four brave young men who helped make Georgia Tech — and, by extension, our society — fairer and better for all. Their personal sacrifice, their determination, and their belief that a better reality was possible made a lasting and transformative impact on the Institute that’s still visible more than 60 years after they first set foot on campus.”

The Ivan Allen Jr. Prize for Social Courage was established in 2010 to honor Tech alumnus and former Atlanta Mayor Ivan Allen Jr. Funded in perpetuity by a grant from the Wilbur and Hilda Glenn Family Foundation, the prize includes a $100,000 stipend for recipients. The inaugural prize was awarded in March 2011.

Additional details about the timing of this year’s award presentation will be announced soon. To learn more about the prize, visit ivanallenprize.gatech.edu. View highlights from the 2019 Trailblazers unveiling event here.