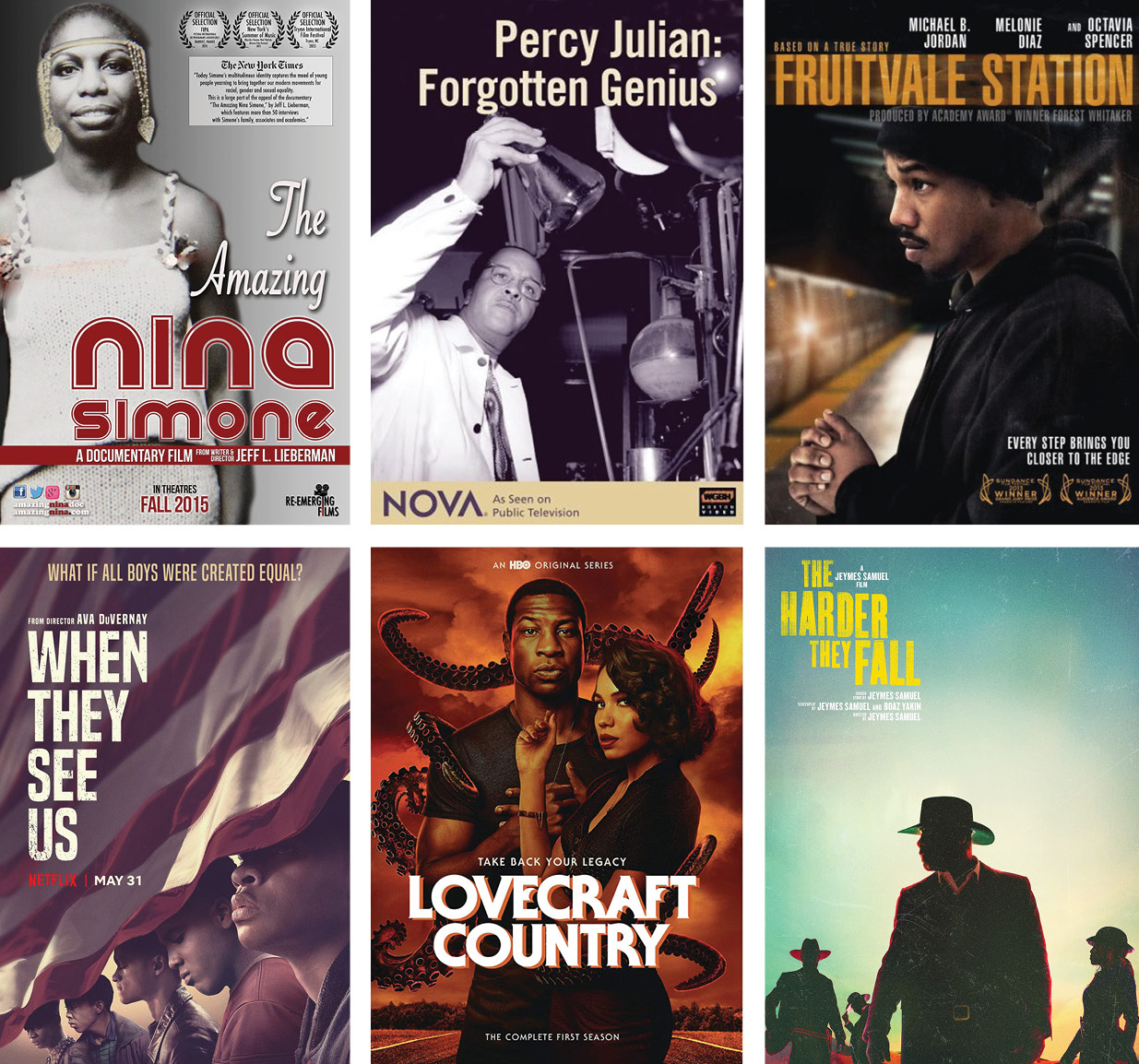 Images of what to watch during Black History Month

February is Black History Month, a time to reflect on the struggles and achievements of Black Americans, and their centrality to U.S. history. We asked several faculty and staff members for viewing recommendations that explore race, identity, history, and memory. The recommendations range from a revisionist Western film with characters loosely based on real cowboys and outlaws of the 19th-century American West to a documentary on chemist Percy Lavon Julian whose contributions include finding a way to mass produce a drug for glaucoma treatment.

“This award-winning documentary shows the human complexity and brilliance of Nina Simone, who was a singer, songwriter, storyteller, music producer, and civil rights activist. Through interviews with those who knew and loved her, it details her journey from her classical musical roots to her unique development of an eclectic blend of jazz, folk, gospel, classical, blues, and African music that could not be defined by one single genre. The movie highlights her resilience and the ways that she shared her truth and advocated for others through music.”

—Tiffiny Hughes-Troutman, director of the Center for Assessment, Referral, and Education (CARE), Division of Student Engagement and Well-Being

NOVA/PBS documentary, first aired in 2007 and is often shown on PBS affiliate stations in January and February. Available online through PBS.

“Forgotten Genius: Percy Lavon Julian (1899-1975) is a NOVA documentary of his personal life and scientific career as a chemist. The documentary was the recipient of the American Association for the Advancement of Science’s ‘Best Public Science’ film. The documentary chronicles Julian’s struggles with personal and institutional racism, especially in the American academic scientific community, to become the first African American to head a division in industry. In the mid-1930s, Julian was appointed director of research at Glidden’s Soybean Division. Under his leadership, the division produced several scientific breakthroughs including artificial sex hormones and cortisone. Respectively, these discoveries resulted in the commercialization of birth control pills and affordable treatment for rheumatoid arthritis. Later, Julian left Glidden to found Julian Laboratories with facilities in the U.S. and Mexico. He became one of the few Black millionaires and was actively involved in the civil rights movement. His contributions to science resulted in his election to the National Academy of Sciences and appearance on a U.S. postage stamp. Despite his significant scientific and civic accomplishments, few Americans are aware of him.”

—Willie Pearson, professor, School of History and Sociology (Note: Pearson served on the film’s advisory board and appears in the film as an interviewee.)

“This 2013 film has only gained power and relevance in the years since its release. Driven by Michael B. Jordan’s performance in the role of Oscar Grant, it tells the story of Grant’s 2009 shooting by a police officer in the Fruitvale station of the BART transit system in Oakland, California. Released in the wake of the death of Trayvon Martin and before the shooting of Michael Brown, the film’s events are excruciatingly familiar. The filmmaker Ryan Coogler’s stated aim was to get viewers ‘attached’ to Grant — to connect deeply to the meaning that his life had, especially for those who loved him, and to grapple with the horrific impact of police violence on Black families and communities, and the absence of accountability in the aftermath.”

HBO, released in 2020. The Georgia Tech Library has the book, not the series.

“Lovecraft Country is a must-see for Black History Month. The HBO series is based on Matt Ruff’s novel of the same name. The story follows the life of Atticus Freeman as he returns home to Chicago after serving in the Korean War. Upon arriving, he finds that his father has mysteriously disappeared, and Atticus joins his uncle and childhood friend to search for him. With the Negro Motorist Green Book to guide them, they embark on their journey only to come face to face with monsters. Who and what are these monsters? Are the monsters portrayed in the 1950s really that different from the monsters Black people face today? The murder of Emmett Till and the burning of ‘Black Wall Street’ in Tulsa, Oklahoma are just a few historical events embedded in the series — which can be described as Black strength providing a tool for liberation, with a science fiction twist.”

When They See Us

Netflix, released in 2019. Available on Netflix.

“Ava DuVernay’s Netflix series, When They See Us, offers an intimate look at the lives of five Black and Latino teenagers falsely accused of the 1989 assault of a white woman in Central Park. DuVernay’s delicate rendering of this infamous miscarriage of justice merges art and politics, reframing this shameful chapter of our country’s long history of judicial racism by giving voice and visibility to the resilience of these young men and their families. At once ambitious and intimate, When They See Us ensures, with its elegant and sometimes harrowing lens, that we bear empathetic witness to both the pain and the strength of these innocent men.”

The Harder They Fall

Netflix, released in 2021. Available on Netflix.

—John Thornton, senior academic professional and director of Film and Media in the School of Literature, Media, and Communication