Christopher Jones, Sandra Magnus, and Nick Sahinidis join Nathan Meehan (Phys '75) and Nick Lappos (AE ’73) in being elected to the NAE, one of the highest professional distinctions awarded to an engineer. 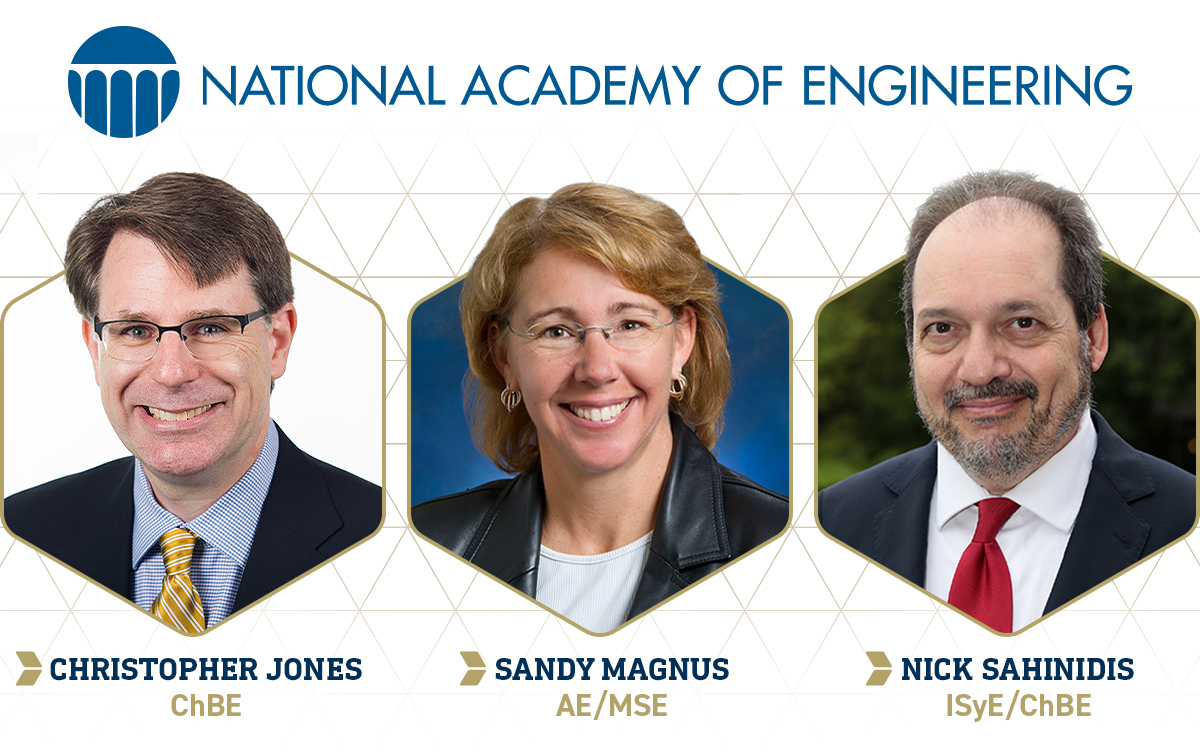 Three Georgia Tech faculty members are among the newest members of the National Academy of Engineering (NAE). Christopher Jones, Sandra Magnus, and Nick Sahinidis have been elected to the NAE, one of the highest professional distinctions awarded to an engineer.

In addition to the three faculty members, two additional alumni were honored. Nick Lappos (AE ’73), was also elected to the NAE Class of 2022. Lappos is a senior technical fellow (emeritus) of Sikorsky Aircraft Corp and serves on the Georgia Tech Aerospace Engineering School Advisory Council (AESAC). He was honored for “improving rotary wing flight performance and serving as test pilot, engineer, inventor, technologist, and business leader.”

Nathan Meehan (Phys '75), a member of the College of Sciences Advisory Board, was also elected. He is president of CMG Petroleum Consulting Ltd. and was recognized for "technical and business innovation in the application of horizontal well technology for oil and gas production."

They are among this year’s 133 new members (including international selections).

“On behalf of Georgia Tech, I extend my sincere congratulations to Chris, Sandy, and Nick for this incredible honor, which highlights a lifetime of achievement,” said Raheem Beyah, dean of the College of Engineering and Southern Company Chair. “Chris and Nick’s research have advanced their respective fields and left an indelible mark on their peers at Georgia Tech and around the world. Sandy, in addition to her service with NASA, is a tireless advocate of raising awareness of STEM and diversity within the aerospace industry in an effort to grow the next generation of the AE workforce. The College of Engineering is tremendously proud of this trio.”

Jones is the John F. Brock III School Chair in the School of Chemical & Biomolecular Engineering (ChBE). He has been a faculty member at Georgia Tech since 2000, leading a ChBE research group that works in catalysis and adsorption, with a strong emphasis in materials chemistry. The NAE is honoring him for “contributions to the design and synthesis of catalytic materials and for advancing technologies related to carbon capture and sequestration.”

Jones is known in the field for his pioneering work on materials that extract carbon dioxide from ultra-dilute mixtures such as ambient air, which are key components of direct air capture technologies that have the potential to reverse climate change.

Magnus (MSE, 1996) is a professor of the practice with joint appointments in the Daniel Guggenheim School of Aerospace Engineering, School of Materials Science and Engineering (MSE), and the Sam Nunn School of International Affairs. She is currently a principal at  AstroPlanetview LLC and is being recognized by the NAE for “national accomplishments in the U.S. civil space program and in Department of Defense engineering and technology integration.

As a NASA astronaut, Magnus flew to space three times and spent 157 days in orbit. Before joining NASA, Magnus worked for McDonnell Douglas Aircraft Company as a stealth engineer. After retiring as an astronaut, she served as executive director of the American Institute of Aeronautics and Astronautics (AIAA). She is now one of three Georgia Tech women in the NAE, joining Marilyn Brown and Susan Margulies.

Sahinidis is the inaugural Gary C. Butler Family Chair in the H. Milton Stewart School of Industrial and Systems Engineering, with a joint appointment in ChBE. In the NAE announcement, Sahinidis was selected for “his contributions to global optimization and the development of widely used software for optimization and machine learning.” His research activities are at the interface between computer science and operations research, with applications in various engineering and scientific areas.

The Academy annual inducts new members, recognizing “engineering research, practice, or education, including, where appropriate, significant contributions to the engineering literature.” The Academy also honors engineers for being instrumental in "the pioneering of new and developing fields of technology, making major advancements in traditional fields of engineering, or developing/implementing innovative approaches to engineering education."

Georgia Tech now has 45 NAE members. This year's cohort will be formally inducted during the NAE’s annual meeting in October.