The Search for Relief Against Extreme Heat

Temperatures are rising and many are trying to find solutions to the heat crisis, Georgia Tech experts weigh in on risk factors and possible solutions to extreme heat. 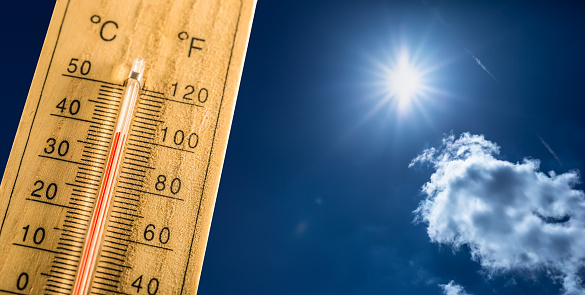 Temperatures are climbing around the globe, leaving parts of the world sweltering under extreme heat, with record-breaking temperatures fueling wildfires and severe drought in some areas.

Heat waves around the world have dashed records, threatened public health, and buckled infrastructure, in what Georgia Tech researchers say are signs of the climate crisis' impact on day-to-day weather.

“This is a stronger heat wave than it used to be,” says Georgia Tech heat expert Zachary Handlos in the School of Earth and Atmospheric Sciences. “But, really, the concern is that these are expected to happen more frequently as the globe warms and atmosphere warms. So, that means everything is warmer in general.”

According to data from U.S. Centers for Disease Control and Prevention researchers, more than 700 people nationwide died from heat-related causes annually from 2004 to 2018. Some research suggests that the death toll will rise in the coming years as climate change makes extreme heat more common, Handlos adds.

“It’s like the frog in a boiling pot analogy,” said School of Economics Assistant Professor Casey Wichman. “It may have been cooler five to 10 years ago, but since those temperature fluctuations changed, it seems each year we seem to break new records and have more extreme records.”

While everyone is susceptible to the health effects of heat, some people are at much greater risk than others. Experts at Tech explain that there’s a clear divide broken up differentially along socio-economic lines.

“Climate change is the greatest threat in human history, and underserved populations are the most at dire risk when it comes to the calamities of the climate crisis,” said Tarek Rakha, assistant professor and director of the High Performance Building Lab.

“More than a quarter percent of the disabled community live below the poverty line,” said Senior Research Engineer Maureen Linden from Georgia Tech’s Center for Inclusive Design and Innovation. “So there are more people with disabilities who are living in less resourced environments who wouldn’t be able to afford air conditioning, which makes them more susceptible to extreme heat.”

In crowded areas such as downtown cities and underserved communities, the buildings tend to be older and not equipped to effectively provide the temporary relief the residents need on high temperature days, Rakha adds. This also leads to many blackouts and brownouts in such areas.

Rolling blackouts and brownouts have affected major cities in many states including Texas and California, leaving many vulnerable to high temperatures over 100 degrees.

Linden points out that such heat-related emergencies also cause problems for the most vulnerable. Those who are unable to regulate their body temperature or rely on specialized equipment are at a critical risk due to the inability to access power and lifesaving power-dependent equipment.

People with mobility issues face their own difficulty reaching cooling centers either due to distance or the struggle to access areas for relief. This is also something that affects members of the homeless community who may be unable to find adequate shelter, says Wichman.

“The prime examples of this are in the Great Barrier Reefs,” Handlos said. “The high levels of CO2 concentration in the water affects the shells of creatures and gradually erodes them over time.”

So what steps are there to prepare for extreme heat or to find relief from sweltering temperatures? Although it may seem daunting to find a solution, Georgia Tech’s experts say small changes can lead to immediate relief for now.

Additionally, accessible communication and services geared toward the disabled community are vital for relief efforts, Linden said. Making sure communications from the National Weather Service are accessible to all, allowing for proper disaster preparation, could help ease the high mortality rates in natural disasters.

Ultimately, Tech experts stress that policies need to be put in place to ensure the population can survive extreme temperatures in the foreseeable future.

“It’s a long-term project, but the outcomes of policies for climate change and extreme heat have shown to be positive in these cases,” said Wichman.

Experts in This Story