As a Black 16-year-old growing up in Atlanta’s Adamsville community, Mayor Andre Dickens couldn’t even tell you where the Georgia Tech campus was located. That’s not what he wants for today’s local youth.

Dickens, the first in his family to attend college, is the first Black alumnus to be elected mayor — and only the second Tech alumnus to hold the position, following in the footsteps of the late Ivan Allen Jr.

In an interview earlier this month, he said running for mayor was always in the cards. If you ask his mom, the dream began at the ripe age of 12. But it wasn’t until he stepped onto Tech’s campus that he really began to understand and apply what it means to lead, to manage conflict, and to build community.

A member of Tech’s Alumni Association Board of Trustees, Dickens holds a bachelor’s degree in chemical engineering from Tech and a Master of Public Administration in Economic Development from Georgia State University.

During his time as a Tech student, he joined the Student Government Association and served as president of the African American Student Union and of his fraternity, eventually expanding his leadership to neighborhood associations and planning units.

He joined Georgia Tech as a staff member from 2010 to 2016 and served as assistant director of outreach initiatives for OMED: Educational Services. In that role, he led programs like the African American Male Initiative dedicated to providing academic resources, mentorship, and leadership training to support the enrollment, retention, graduation, and career placement of Black males at Georgia Tech. In 2018, he co-founded a career program through the nonprofit TechBridge to teach people the skills they need to land information technology jobs.

After Dickens ran for and served on the city council, he looked onward to what he felt was his inevitable role as leader of the city he’s always called home. On a chilly Monday, Jan. 3, Dickens was sworn in as 61st mayor of Atlanta before a crowd of hundreds at Georgia Tech's Bobby Dodd Stadium.

It came about four years earlier than he expected, Dickens said. “But here we are.”

Being mayor means working day and night — and it’s tough work. He added it reminds him of what it was like just trying to get through Georgia Tech — not only because the new role requires tremendous energy and discipline, but because it feels like a community effort.

But it was easy to accept Georgia Tech President Ángel Cabrera’s invitation to host the inauguration on the Tech campus — especially because of what coming full circle back to his alma mater means to him.

As a Georgia Tech student, Dickens looked to his support structure of tutors, coaches, advisors, professors, and fellow students for guidance. As a staffer, the work he did to help minority students thrive at Georgia Tech laid the groundwork for what he hopes to do in government. Now that he is mayor, Dickens knows how many are counting on him to do better by the city and its residents.

When he envisions the future for a more progressive Atlanta, Dickens is optimistic that Georgia Tech and the city’s other institutions of higher learning will continue to open doors for Atlanta’s youth, including the kids within the city’s marginalized communities, in ways he didn’t have the privilege of experiencing firsthand. 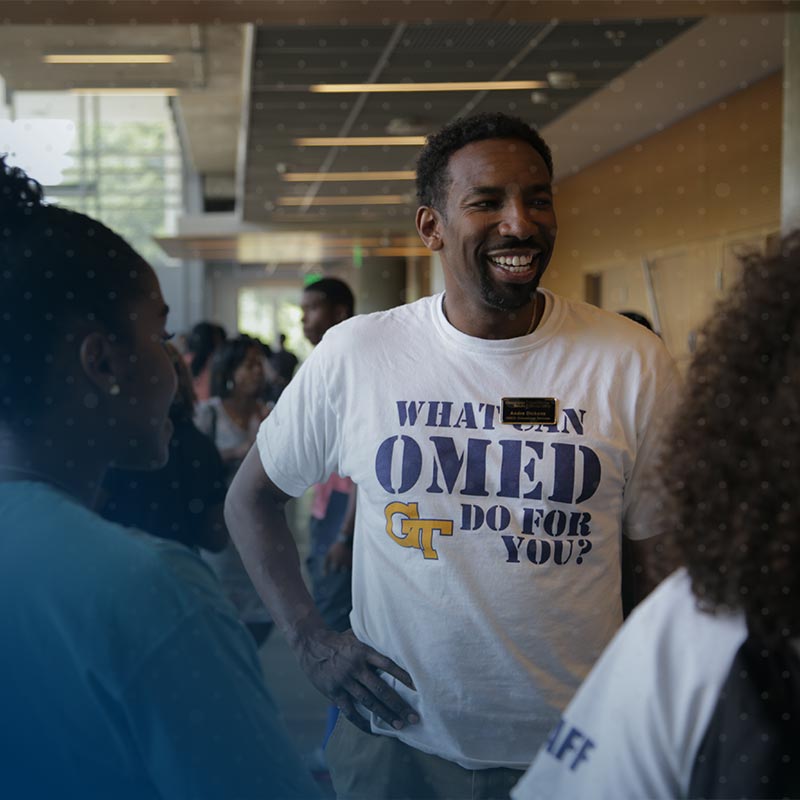 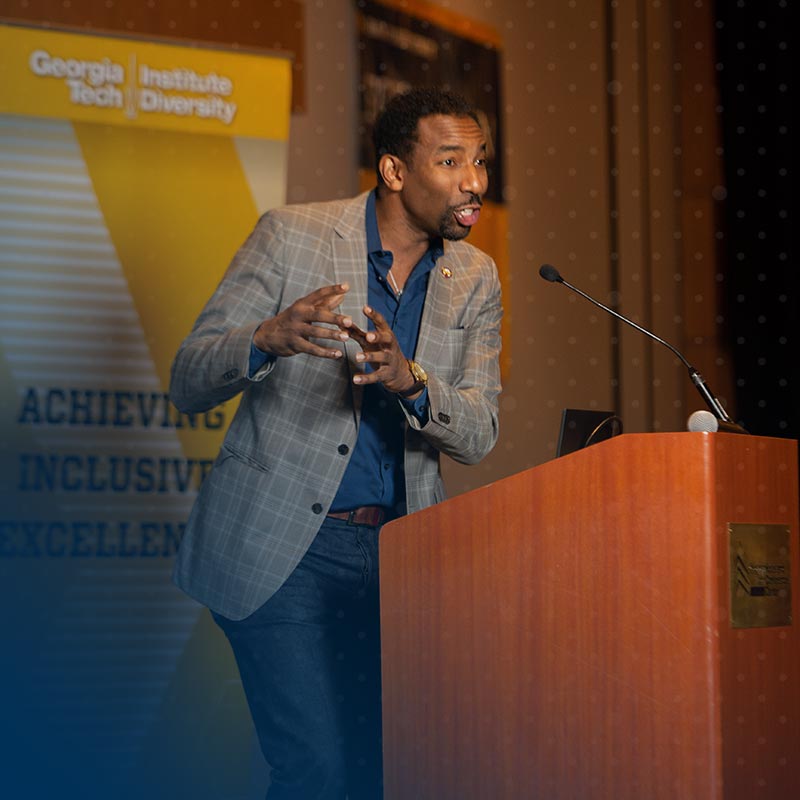 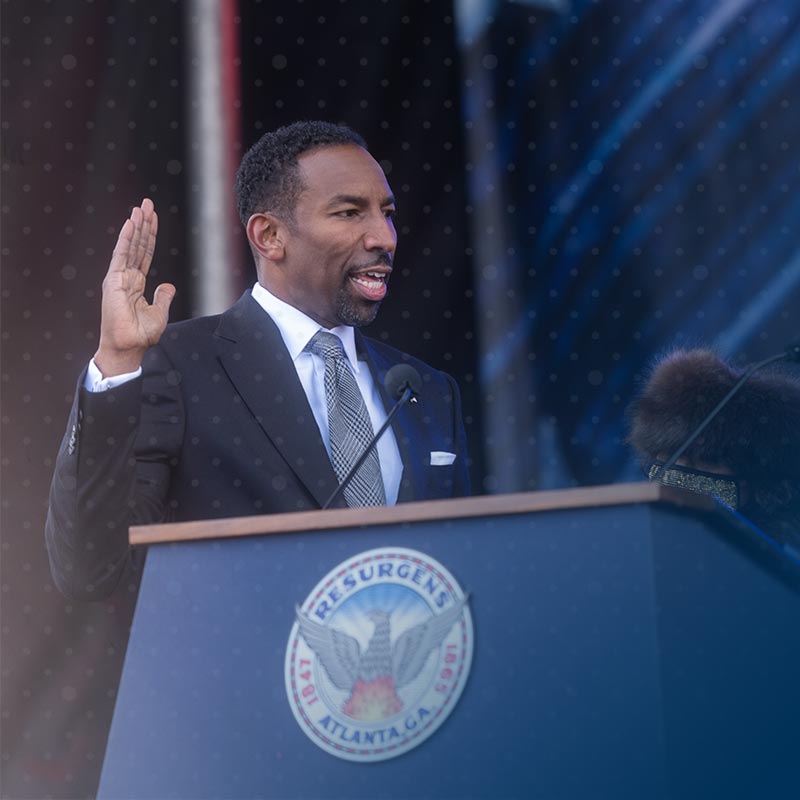 In fact, September 2021 marked 60 years since those students — Ford C. Greene, Ralph A. Long Jr., and Lawrence Williams — became the first Black students to enroll at Georgia Tech. The school was the first public university in the Deep South to integrate peacefully without a court order.

Last year, Dickens joined Georgia Tech’s School of Chemical and Biomolecular Engineering and the African American Student Union at the opening of a civil rights memorial in Tech’s EcoCommons, a greenspace built on the site of a former symbol of racial oppression in Atlanta.

“I want Georgia Tech to raise its hand early and often for us and for the community — to make sure they say, ‘Hey, we fit in with you. So come on in and join.’”

To Dickens, that means opening up campus doors to the public, allowing the campus to become available for educational learning, for sports, and for conferences. For Atlanta Public Schools students, he hopes for more after-school programs, weekend programs, and summer camps. And as he continues in his role as mayor, Dickens is optimistic that he’ll build upon the great relationship he already has with the Institute.

“I believe that Tech can do it,” Dickens said. “It started with the inauguration at Bobby Dodd, and it’s going to continue.”

When he visited his alma mater earlier this month, Dickens was surprised to see a banner of himself displayed in front of the building where he spent six years as a student and another six as an employee. He hopes the Black students visiting campus would see a piece of themselves in him and believe whatever they dream up can be made true — whether that’s running for mayor of Atlanta or president of the United States, climbing the ladder to CEO of a company, or bettering their community as a thoughtful engineer.

“You have a mayor now who’s walked those same halls,” he said. “I invite all of you — the Tech alum[ni], all of the faculty and staff — to continue to join forces with the city of Atlanta in the excellent work we’re doing.”