Gerald "Doc" Hill manages a five-person team that takes care of Bobby Dodd Stadium - making sure everything is working and ready for game day.

Anyone asking for “Gerald” is likely to be met with a blank stare. His wife is the only one who calls him that. To everyone else, Gerald Hill is just “Doc,” a nickname that stuck after his younger sister gave it to him when he was just 6.

“I don’t really know where she got ‘Doc,’ but it could have been from Bugs Bunny — ‘What’s up, Doc?’ We watched that a lot,” Hill said.

For 20 years, Hill has been a fixture in Georgia Tech Athletics. After working at GTRI’s Cobb County facility for 14 years, he came to the Tech campus in 1997 to help manage and maintain facilities for volleyball, basketball, and football. Today, he manages a five-person team that takes care of Bobby Dodd Stadium — making sure everything is working and ready for game day.

“The job includes preventative maintenance — from refrigerators and air conditioning in the suites, to making sure all of the lights are working and touching up any scratches on the walls or furniture,” Hill said. “After season, we catch up with the maintenance inside the buildings. If I can repair it, I will.”

Right now, the football locker room is being renovated, so Hill is assisting the crew that is doing the work.

Each day, he arrives at work at 5:30 a.m., and he reviews the list of upcoming jobs.

“The day never goes as you plan it,” he said. “It can be frustrating, so you need to prioritize. It’s never dull; there’s always something going on. I’m willing to take on whatever challenge there is,” he said. “Big stuff doesn’t bother me, like flooded buildings or remediation.”

Hill has always worked in some area of construction: roofing, framing, installing lighting, hanging doors, or building sheetrock walls. He didn’t have a formal apprenticeship for carpentry, but he learned as he went along.

“If you work with somebody that has been doing the job for a while, you’ll learn a lot from them just by watching. You don’t have to be hands-on. You can watch how they use miter saws, coping saws, and different tools to form angles on the wood,” he said.

Since working at the stadium, Hill has met a few famous people including rapper-actor Ludacris and singer Elton John. He didn’t meet the Rolling Stones when they performed at Bobby Dodd, but his department helped the crew store their stage equipment. And, last year Bobby Dodd hosted nine Atlanta United soccer games before football season started.

“Atlanta United soccer was definitely a different crowd,” he said. “If you could get football fans like that — win, lose, or draw, they stand up the whole time, cheering.”

Hill is as committed as those soccer fans in his support of Tech’s student-athletes. In the past 20 years, he has missed only two football games.

Hill’s commitment has not gone unnoticed. For example, when Tech alumnus Jarrett Jack of the New York Knicks was inducted into the Georgia Tech Sports Hall of Fame in 2016, he thanked Hill during his speech:

“To my guy, Doc ... There were many late nights when I would go to the gym and shoot in the dark. I didn’t know how to turn the lights on. I guess Doc heard the ball bouncing, and he would just flick the lights on. I don’t know if he had a mattress set up in the gym or whatever, but Doc was always there. It was those late nights — those nights when I didn’t have to be in there — when I think I separated myself and allowed my game to grow. Doc, I will forever appreciate you for that,” Jack said.

Time Away from Work

Hill was born in Tampa, Florida, into an Air Force family. The family relocated to Gainesville, Florida, and he finished high school there. The family later moved to Marietta, Georgia, and Hill’s dad got a job at Tech working in microelectronics.

He met his wife, Carol, in Marietta when he carpooled to work with her brother.

“She would have curlers in her hair every morning,” Hill said. He joked with her and said he was going to ask her out so that he could see what she looked like without the curlers.
“I knew she was the one: level-headed, great with finances, and great with kids.”

Carol works in Payroll for Automated Data Processing. She and Doc have two sons: Wesley, 30, and Ryan, 28.

When he isn’t working, Hill enjoys being outdoors — fishing at West Point, Georgia, or hunting deer and turkey in Butts County. He also plays golf with his father-in-law, but not often.

“I can’t retire and just sit. If there was work to do, I would work seven days a week,” he said. “I get kind of miserable when I don’t have anything to do!” 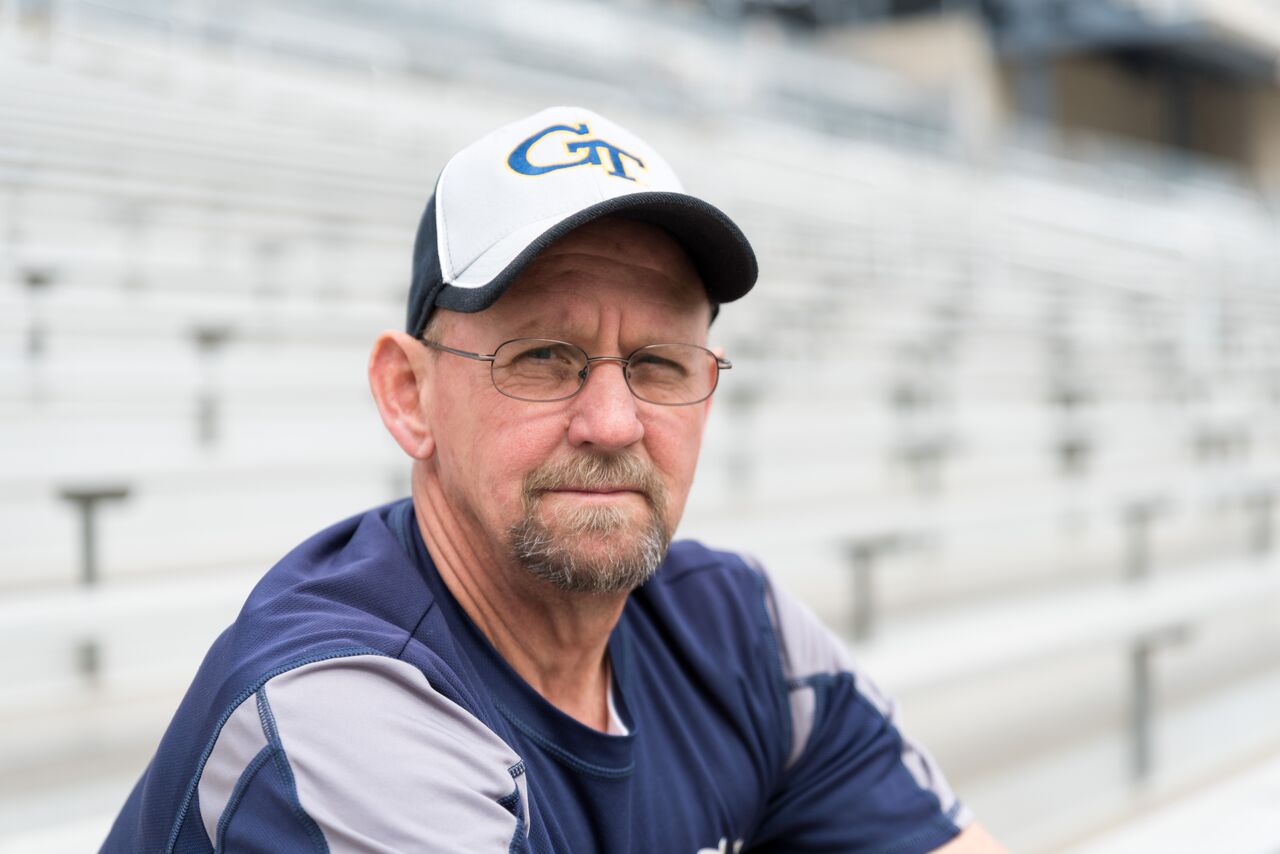 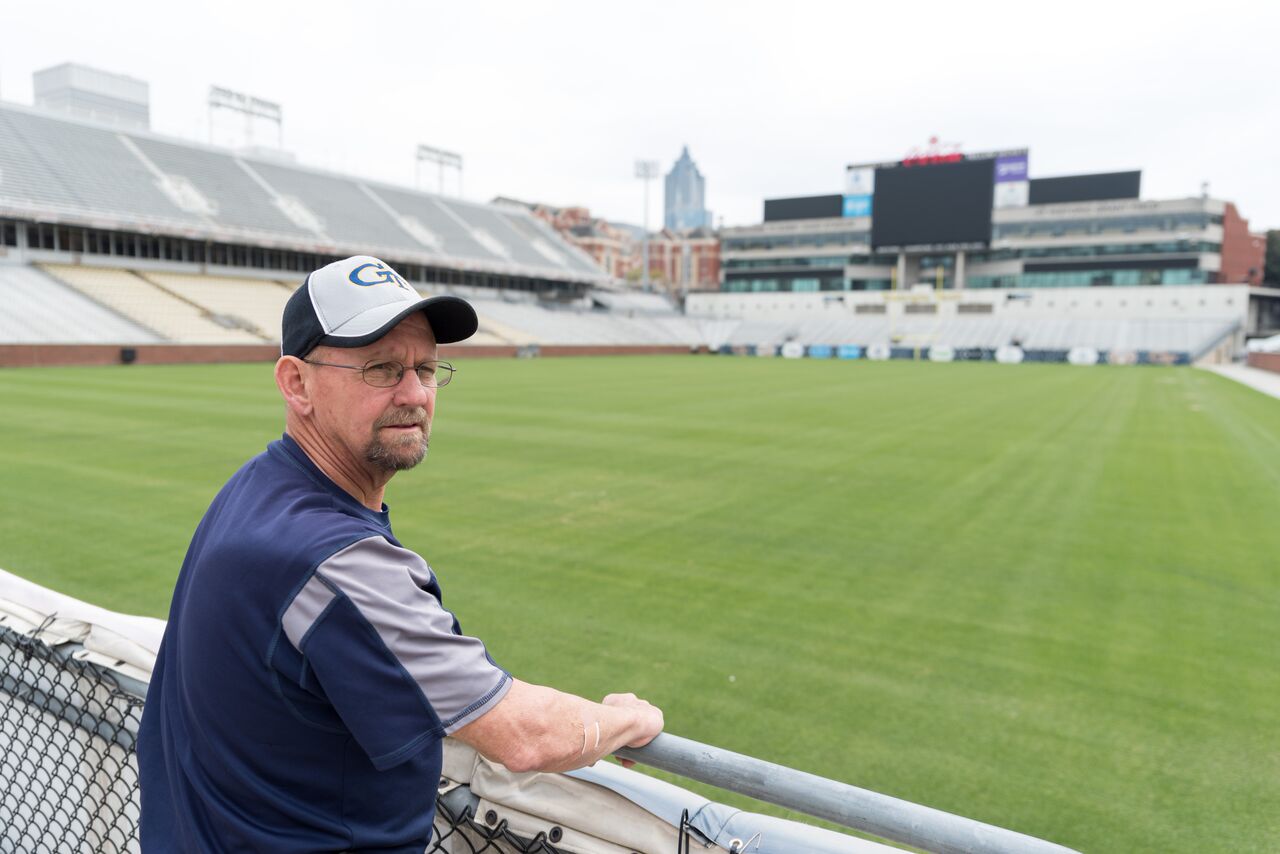