Quentin Holden, certified as an arborist through the International Society of Arboriculture, takes care of Tech's trees.

Georgia Tech’s campus has more than 13,000 trees. So, it makes sense to have a tree surgeon to aid in the care and feeding of such a large canopy. That’s where Quentin Holden comes in.

Holden, certified as an arborist through the International Society of Arboriculture, is a tree surgeon in Facilities. The job has a wide range of duties.

“I never do the same thing on a long-term basis,” he said. “Yesterday I was pruning trees with a pole saw. A few days before that, I was climbing a tree and cutting limbs. At other times I’m putting out fertilizer or watering. It’s very diverse and very interesting.”

Holden’s interest in trees and working outdoors stems from childhood. His father owned a tree removal company, and when Holden was 13 he spent the summer helping his dad clear saplings from a client’s property. The client had a lake on the property, and Holden was allowed to fish there.

“After that, I connected trees with fishing and the outdoors,” he said. “It was a good experience.”

After graduating from Ridgeview High School (now Ridgeview Charter School) in Sandy Springs, Georgia, Holden went to Abraham Baldwin Agricultural College in Tifton, Georgia, to study forestry. He became homesick after a year, thinking forestry really wasn’t what he wanted to do.

“They were talking about working way out in the back country, and I wanted to be in a more urban setting,” he said. “There wasn’t much happening with urban forestry at the time. So, I came back to Atlanta and decided to study history at Georgia State University.”

Holden earned a degree in history in 1990. He worked in the corporate world for a few years before joining the Peace Corps in 1993 and going to Grenada to work as a junior forester. There he managed the building of trails in a national forest, surveyed an acre plot in the Grand Etang National Park, and managed a mahogany tree-planting site.

When he returned to the U.S., he got a job with AmeriCorps in their soil conservation program in the Clayton County Extension Office. He also went back to school at night to get certified to teach.

He put his love of trees on hold for 11 years while he taught geography, Georgia history, and world history to grades 8 through 10 at North Clayton High School and Decatur city schools. But the trees kept calling him. So, he studied to become certified as an arborist, which he achieved in 2000 while teaching.

“In 2008 I decided to take a jump from teaching history to get into doing what I love doing most — being an arborist and working outside,” he said. After working with Trees Atlanta for about six months, Holden operated his own tree planting business for three years before coming to Tech in 2012.

“I always liked Georgia Tech because my dad had gone to school here before being drafted into the Navy. So, we had a connection with Georgia Tech growing up,” he said.

One of Holden’s favorite parts of his job is keeping the trees in good condition.

“I like climbing large trees and improving their health,” he said. “A lot of them have bounced back after we removed some dead wood and cleaned them up. It’s nice to see their health improve and to be a part of that.”

Even when being proactive and providing good care, sometimes a tree has to be removed for safety. Big Al, the massive oak tree that split last year, is one example.

“We’re very reluctant to remove large trees,” Holden said, “because even if it’s diseased a lot of people would be upset. We want to make sure we’re doing the right thing. Safety is the most important thing.”

Holden said they only remove a large tree if removal is the only option that will keep the campus and students safe.

“The main reasons to remove a tree is it’s either dead, dying, or diseased. If it were to fall on its own, it could harm someone, a vehicle, or other property. These are the things we look out for,” he said. “Before removing a tree, we have two outside arborists evaluate the tree to make sure that what I say is correct and to make their recommendations as well.”

Holden urges everyone on campus to be aware of work zones around trees.

“The caution tape is there for your safety. Limbs may be falling, so please don’t walk through the area,” he said.

Although Holden spends his days working on trees, he often takes time to appreciate their beauty.

“There’s a nice sycamore tree on the back side of the J.S. Coon Building,” he said. “In the winter it looks like a large bone because the bark flakes off.” 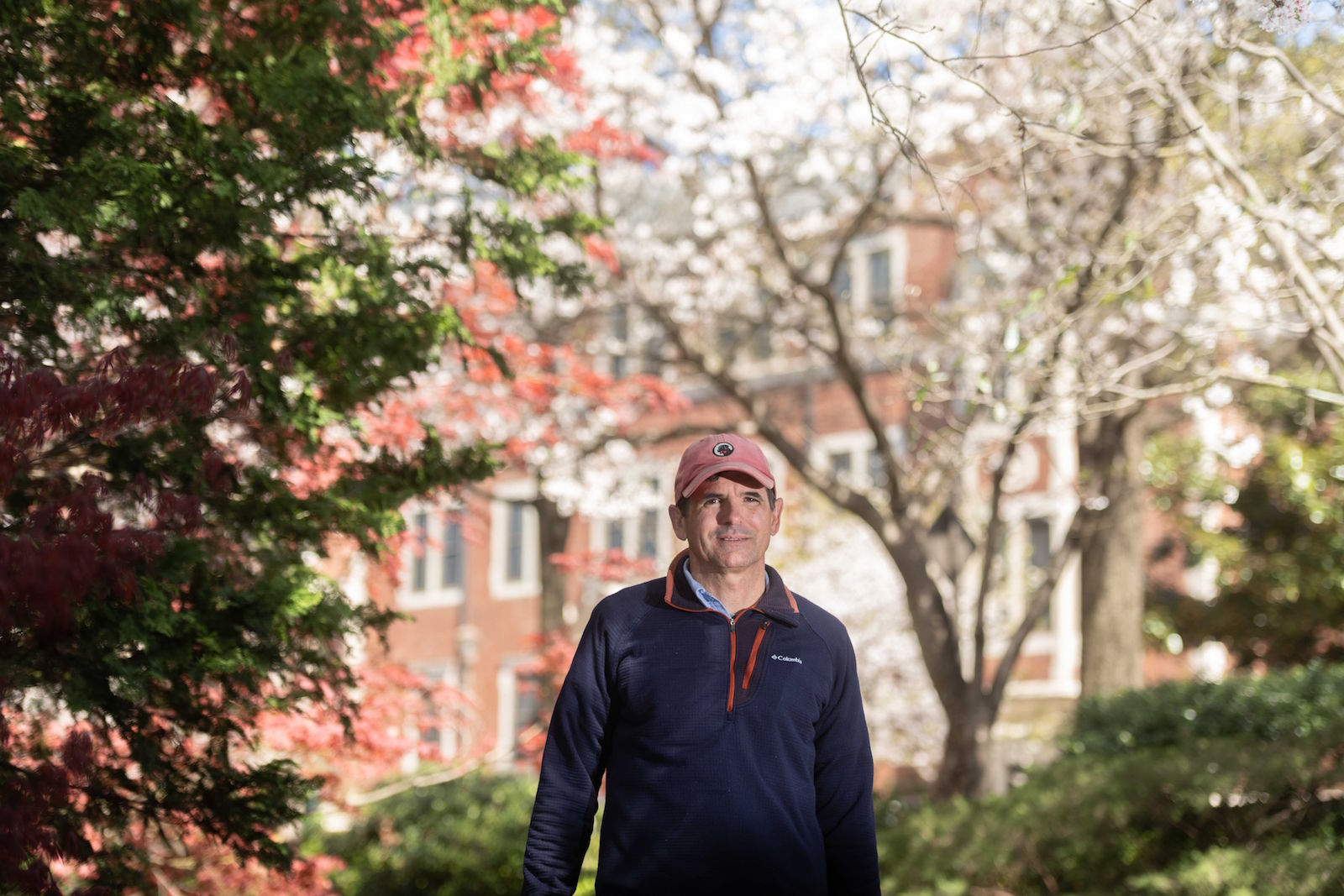 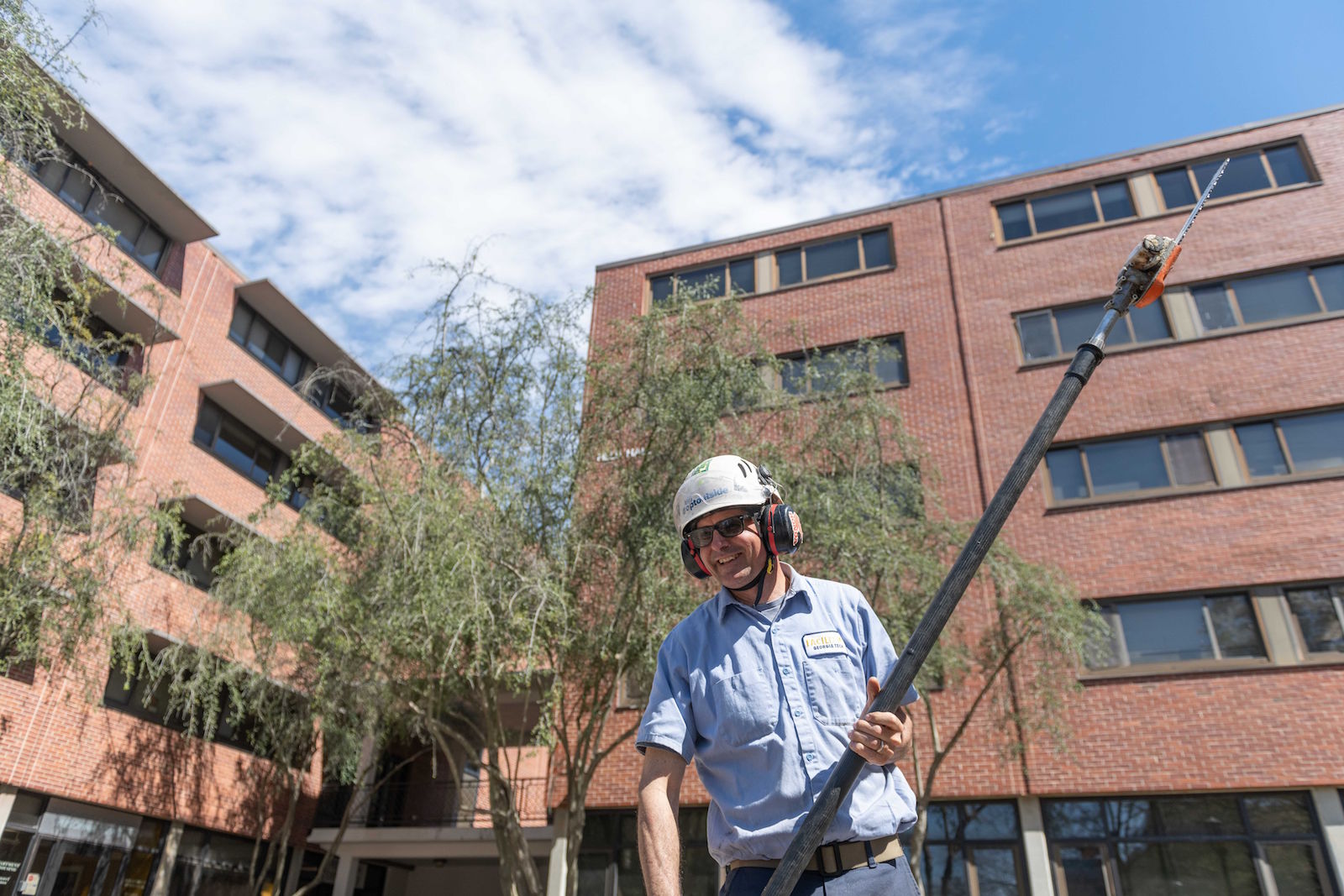 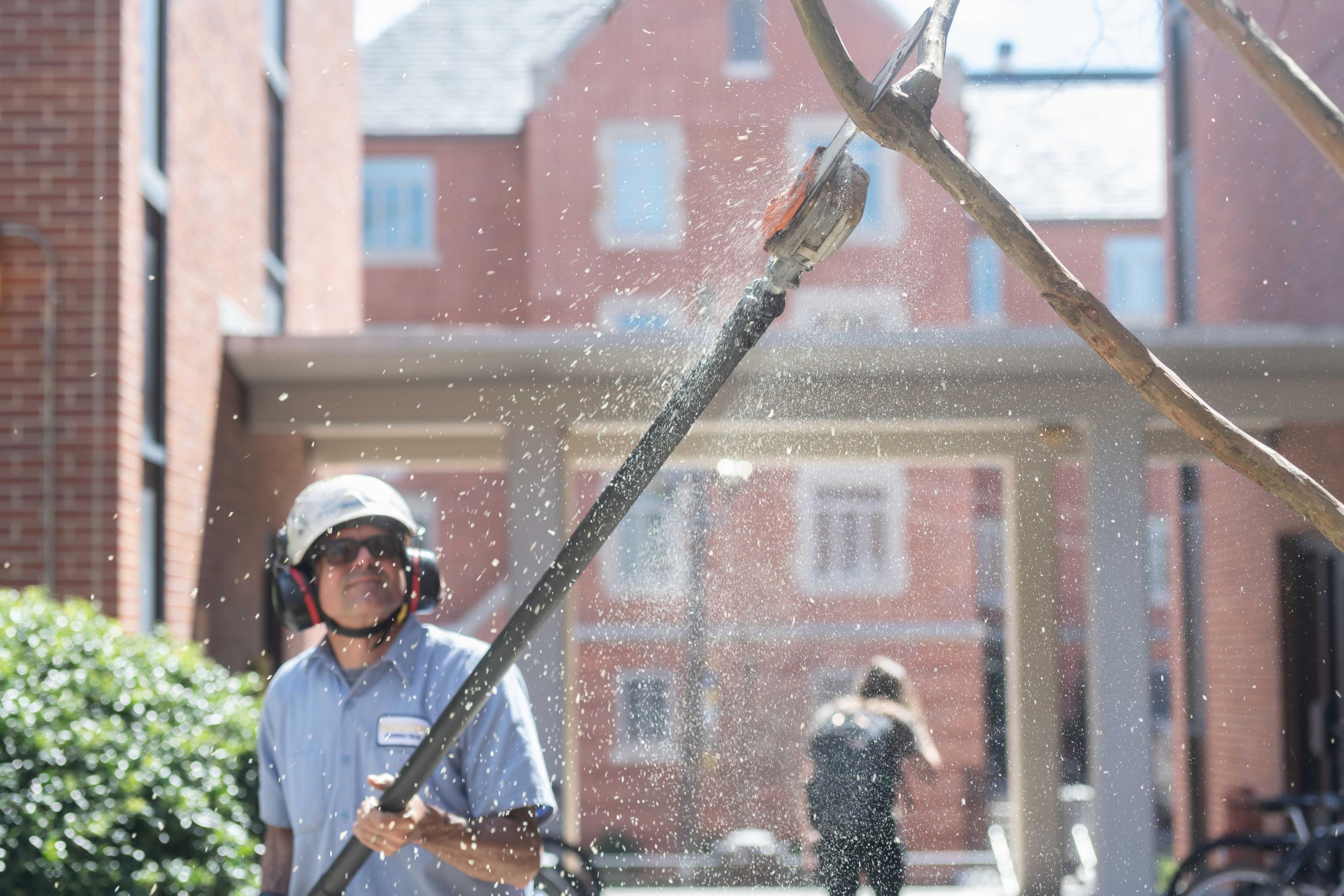 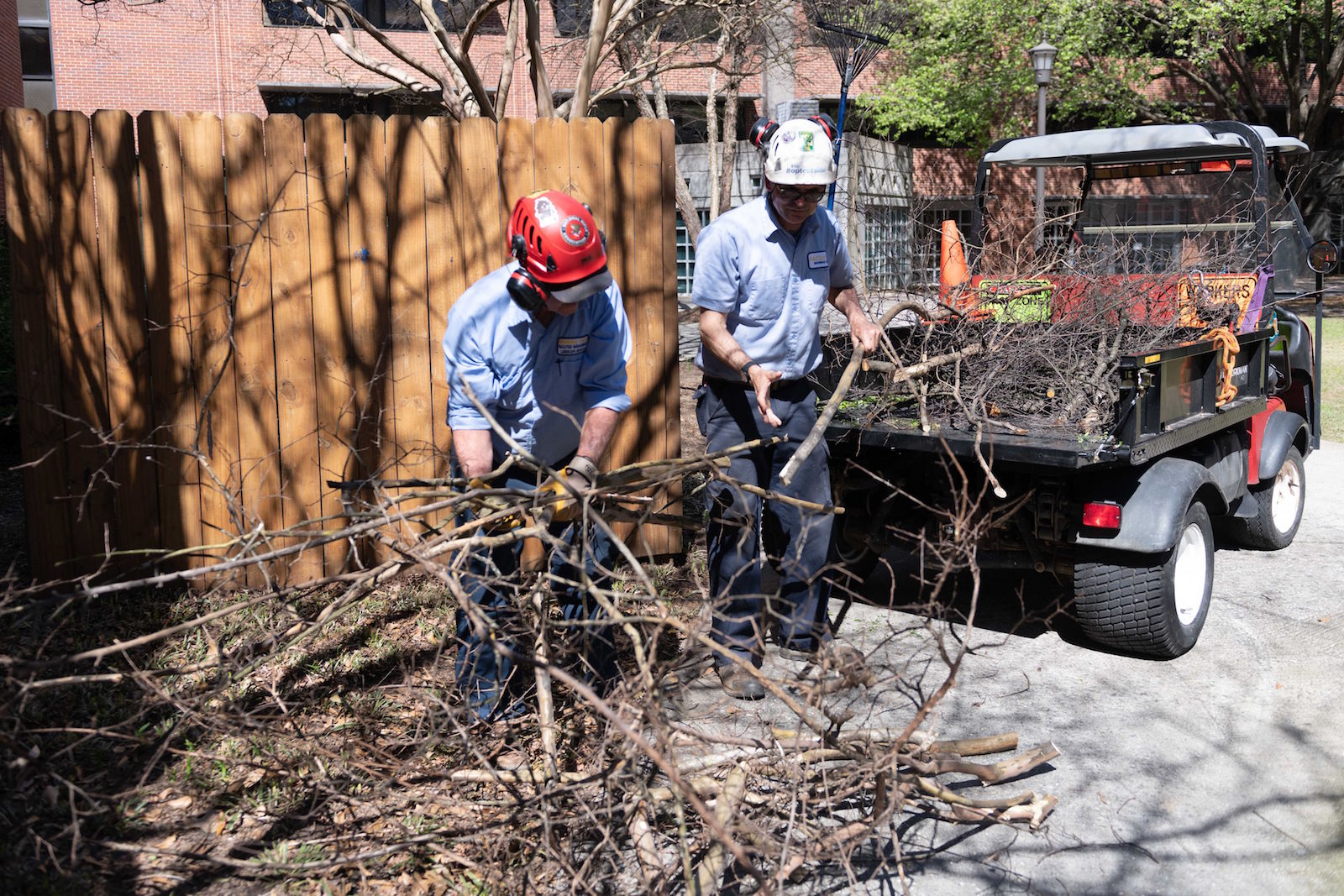